The violent crimewave sweeping the UK is being fuelled by a Home Counties fishing tackle company that makes deadly ‘Rambo’ hunting knives.

Gangs and drug dealers have adopted the terrifying blades – some more than 18in long – as their weapon of choice in murders, stabbings and violent rampages, a Mail on Sunday investigation can reveal.

The weapons can be bought for less than £10 and boast chilling names including First Blood, Fantasy Hunting Knife and Predator. 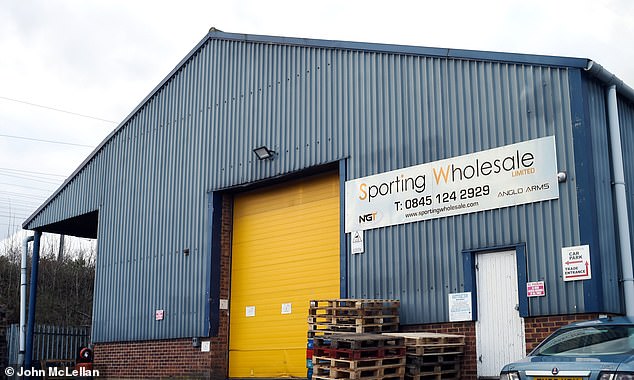 Sporting Wholesale Limited, pictured, offers a range of large knives for as little as £10 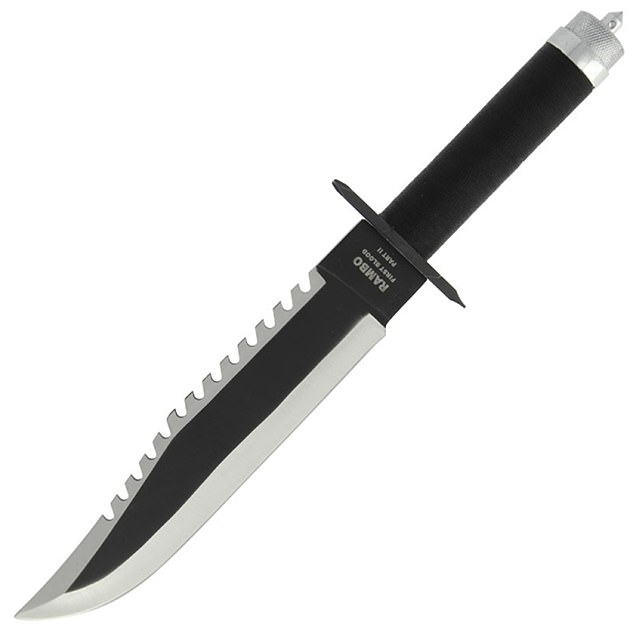 So many of the blades made by the firm Anglo Arms are flooding the streets that police have seized more than 30 of them in the past month alone.

The wholesale company sells the knives to shops and online retailers. Last night there were calls to crack down on the firm and close the loophole that means lethal knives can be sold online and delivered to home addresses.

MP Sarah Jones, chairwoman of the All-Party Parliamentary Group on Knife Crime, said: ‘There is absolutely no way these horrific weapons should be on our streets. I would like to see the police investigate who these online retailers are selling to as a matter of urgency.’

She added: ‘The Government said it would ban this as a priority last April but since then they have repeatedly delayed putting the legislation through Parliament. In that time knife crime has increased and every day that knives like this are on our streets puts people in danger.’

Anglo Arms is run by Eddy Eliaz, 39, a keen angler who also sells fishing tackle through his firms, Next Generation Tackle and Sporting Wholesale.

Sporting Wholesale had a turnover of £8 million in 2017, making a gross profit of £2.5 million.

The companies are all based in a large warehouse in affluent Harpenden, Hertfordshire, just 30 miles but a world away from the London streets where his products are increasingly found. 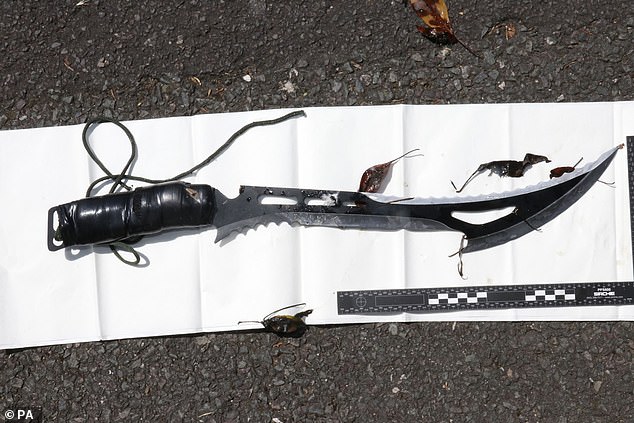 The latest Anglo Arms catalogue features 19 pages of knives, swords and machetes – all currently legal for over-18s to buy.

They include a range of blades sold under the name of films that feature knives prominently, including Rambo, Predator, The Expendables and even Crocodile Dundee. Some of the knives are 20in long.

For as little as £9.99, the company sells a black lock knife decorated with a blood-spattered picture of comic-book villain the Joker.

Top-of-the-range items include an ‘assassin’s sword’ with a 26in blade, costing £55.

But the most commonly seized products appear to be two 15in hunting knives, one with a serrated blade and the other with holes in it to make it lighter.

Either can be bought from survivalist website Preppers Shop – which is not owned by Mr Eliaz – for just £9.99.

Independent policing researcher Gavin Hales said: ‘It became clear late last year that two very large and fearsome models of knife, both sold under the Anglo Arms brand, were regularly cropping up on police social media accounts, having been seized from members of the public – including teenagers too young to buy them legally.

‘The more I and others have looked, the more we have found. We might ask why they are apparently so popular on the streets of cities like London, where and how they are being purchased, how in many cases teenagers are getting hold of them, and especially whether – given their design and low price – they may even be fuelling knife crime.’

This armoury of five lethal weapons was found on one 14-year-old boy last month – but astonishingly he has been spared jail.

Police stopped and searched the teenager at 2pm on Sunday, January 13, in Highbury, North London. 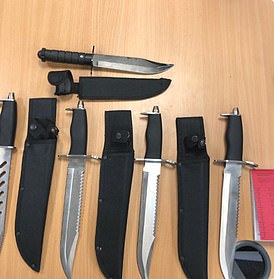 He pleaded guilty to five counts of possession of an offensive weapon at Highbury Corner Magistrates’ Court on January 29.

Scotland Yard said he was ‘referred to the youth offender panel for a ten-month period’ – meaning he will simply have to go on a course aimed at changing his behaviour.

Analysis by this newspaper has found that at least 31 of these two knives have been seized by police since the start of the year.

Most were found by officers searching suspected gang members or drug dealers in London but others were found in Birmingham and Worthing. In one shocking case, a 14-year-old boy was caught with five Anglo Arms blades on a Sunday afternoon in Highbury, North London.

He was spared jail even though he could have got up to four years behind bars.

Inspector Owen Pyle wrote online last week that one of his officers in Southwark, South London, had found a ‘nasty’ Anglo Arms knife on a 17-year-old during a stop- and-search.

He said: ‘We’re finding these on people every single day. Their only use is to seriously hurt people.’

Asked online by a member of the public how the teenager could have got hold of the weapon, Insp Pyle replied: ‘I’d suspect they’re bought off of the internet. Some people sell them and deliver them with no checks at all. Very irresponsible.’

And police in Islington told how a ‘concerned mother’ found one of the ‘terrifying’ weapons hidden in her 15-year-old son’s jacket.

Further analysis has uncovered more than 50 incidents last year where Anglo Arms knives were involved. The company’s distinctive slotted blade hunting knife was found on Muaz Tarafdar, after he tried to flee from police in Cardiff and was bravely tackled by members of the public.

After Abbas Dinki drove his moped at police in East Ham, he was found to be carrying an Anglo Arms serrated hunting knife.

Police sources say chiefs are aware that Anglo Arms products make up a large proportion of the weapons being found by officers.

The National Police Chiefs Council said it did not keep statistics on the types of knives seized but a spokesman added: ‘We do seize a large number of hunting knives.

‘They are purchased via shops and also online. We work with retailers online and on the high street to explain their obligations when it comes to selling knives. Forces carry out checks and will take action when retailers are found not to be meeting these expectations.’

Since July 2017, the Government has been pledging to take action to stop under-18s buying knives online. The Offensive Weapons Bill will make it illegal for knives to be delivered to home addresses, so retailers will have to check the age of the purchaser before handing over their order.

However, it has been repeatedly delayed going through Parliament and could be pushed back even further because the Home Office is planning to add extra amendments to introduce Knife Crime Prevention Orders.

The Asbo-style orders are aimed at stopping rival gangs feuding by imposing curfews and even social media bans.

A House of Commons Library report in November found there were 40,100 knife crime offences in England and Wales in the year to March, a 16 per cent rise on the previous year. And there were 134 homicides in London last year – the highest number for a decade.

Police and the public want more bobbies on the beat to keep order and to stop and search suspects.

But London Mayor Sadiq Khan has set up a Violence Reduction Unit that is treating the crime epidemic as a ‘public health’ problem to be treated by looking at the long-term causes of young people joining gangs and carrying weapons.

A spokesman for the Home Office said last night the Offensive Weapons Bill will become law by the summer. It will also ban the possession of weapons whose sale is already banned, including flick knives and knuckledusters.

Last night Preppers Shop said it had a stringent age-verification process, adding: ‘Until proof of age is completed and proven, no order is dispatched.’

Bought online in TWO MINUTES – by a boy of 16

A 16-year-old was able to buy a huge Rambo knife online with just a few clicks – and with no checks on his age.

By law, shops are banned from selling large knives to under-18s and the same rules are meant to apply to internet shops. But an under-age volunteer commissioned by The Mail on Sunday from test-purchase firm Serve Legal was easily able to sidestep the restrictions.

The 16-year-old went on to popular ‘survivalist’ website Preppers Shop UK and ordered a ‘Rambo-style knife’ made by Anglo Arms. 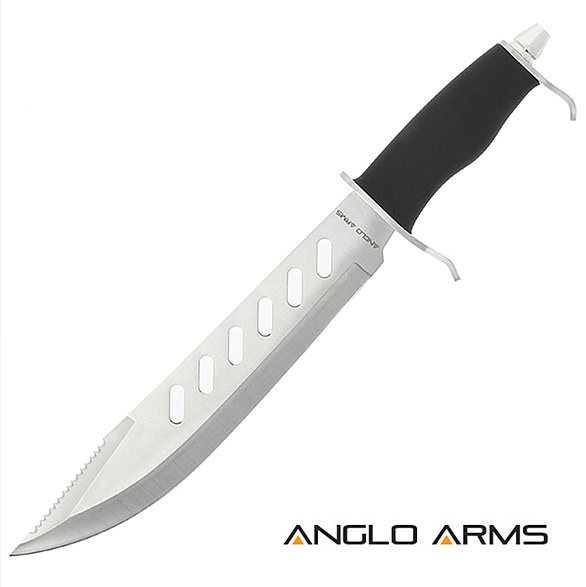 Our test purchaser simply clicked ‘yes’ when the web form asked: ‘Are you over 18?’

He filled in his true name and home address – which would have revealed that he is too young to be on the electoral roll – and immediately received a message stating: ‘Success! Your order has been placed.’ The whole process took only two minutes.

The youth was then sent a confirmation email stating that the deadly Rambo knife – based on the one used by Sylvester Stallone in the violent 1980s Rambo films – would be sent to his house within 48 hours.

Preppers Shop does provide a link to a Government website stating that long knives cannot be sold to under-18s.

But it also states: ‘A good knife is an essential item for many UK Preppers. The right knife can be used for everything, from making kindling and splitting wood, to more advanced bushcraft and survival skills such as hunting and preparing food.’

Preppers Shop was set up in 2014 to cater for the growing number of ‘survivalists’ who want to be ready for what they think is the imminent breakdown of society. Its website states: ‘If you are not prepared, your chances of survival are extremely slim.’

Unlike Preppers Shop, other websites would not sell knives to our 16-year-old test purchaser.

Sporting Wholesale, which is part of the same company as Anglo Arms, sells only to trade rather than personal customers.

And DNA Leisure, based in the same warehouse as Anglo Arms, sent our shopper an email asking him to provide proof that he was over 18 before his order could be processed.

Knives used in a murder, a near-fatal stabbing and to attack unarmed WPC 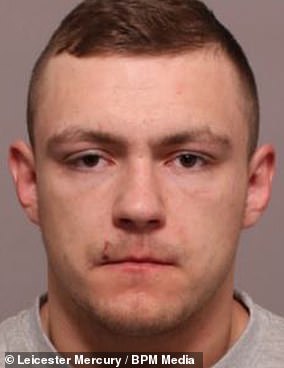 One of the firm’s hunting blades, described as ‘fearsome’ in court, was used by Harry Matthews, pictured, to stab Mark Swinhoe to death in a drug deal gone wrong

In the past two years, Anglo Arms knives have been used in a murder, a near-fatal stabbing and an attack on an unarmed policewoman.

One of the firm’s hunting blades, left, described as ‘fearsome’ in court, was used by Harry Matthews to stab Mark Swinhoe to death in a drug deal gone wrong.

Matthews, 23, was jailed for a minimum of 27 years over the killing in an alleyway in Loughborough, Leicestershire, last January.

The previous March, a 16-year-old armed with an Anglo Arms hunting knife with a serrated blade ran into a shop and repeatedly stabbed another teenage boy. The masked youth, a member of North London’s Essex Road gang, left his victim with a punctured lung and lacerations to his liver.

The attacker was jailed for 14 years at the Old Bailey after police found the bloodstained knife in his bed, along with YouTube videos showing similar weapons being brandished by the gang.

And Surjit Singh, 54, was jailed last October for brandishing a ‘monstrous’ Rambo combat knife at a police officer at Leicester railway station.

Singh threw the weapon at her on the busy concourse before being tackled, and was jailed for six months.