They were born in 1969, the year man first walked on the moon. Now some of Hollywood’s biggest female stars are set to celebrate a historic milestone of their own – turning 50. , Catherine Zeta-Jones, Renee Zellweger and will take a giant leap for womankind this year as they reach their half-century looking as toned and sexy as women decades younger.

Aniston will be first to hit the landmark later this month. The Mail on Sunday has learned she will celebrate in style with a ‘Fabulous At 50’ party for which all her friends have been asked to record a message that will be unveiled during a This Is Your Life-style tribute.

But before she indulges in her favourite margaritas, Aniston will start her day with her latest passion – an hour in the boxing ring, sparring with her (much younger) male trainer. 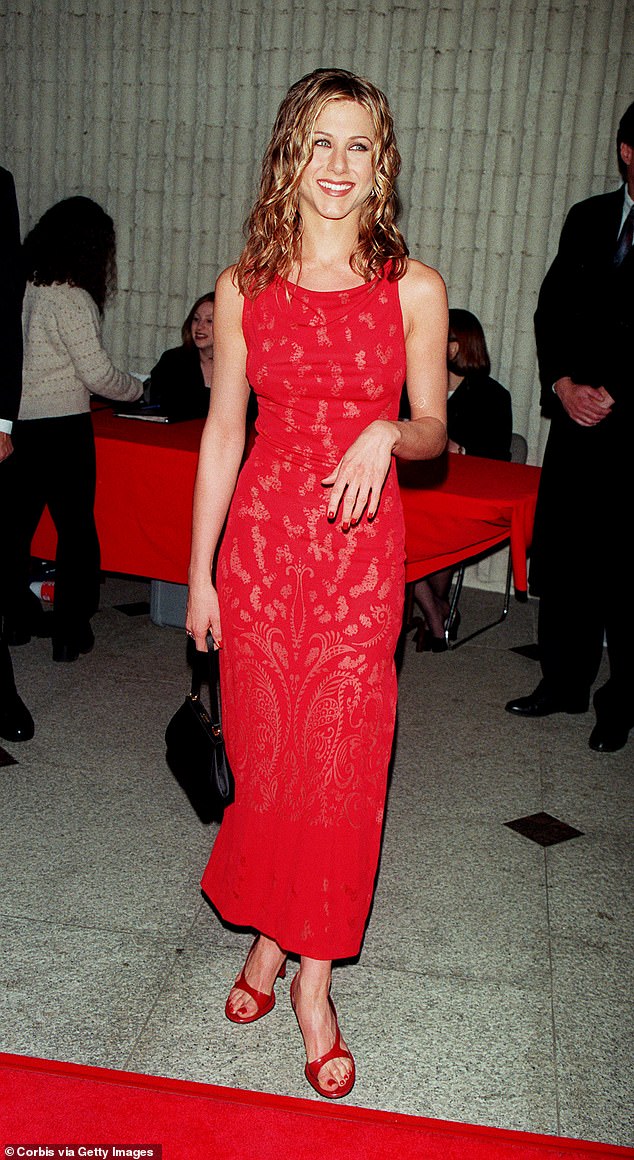 At 30: Jennifer Aniston, the Friends star who credits her lack of wrinkles to her ‘Greek genes’ 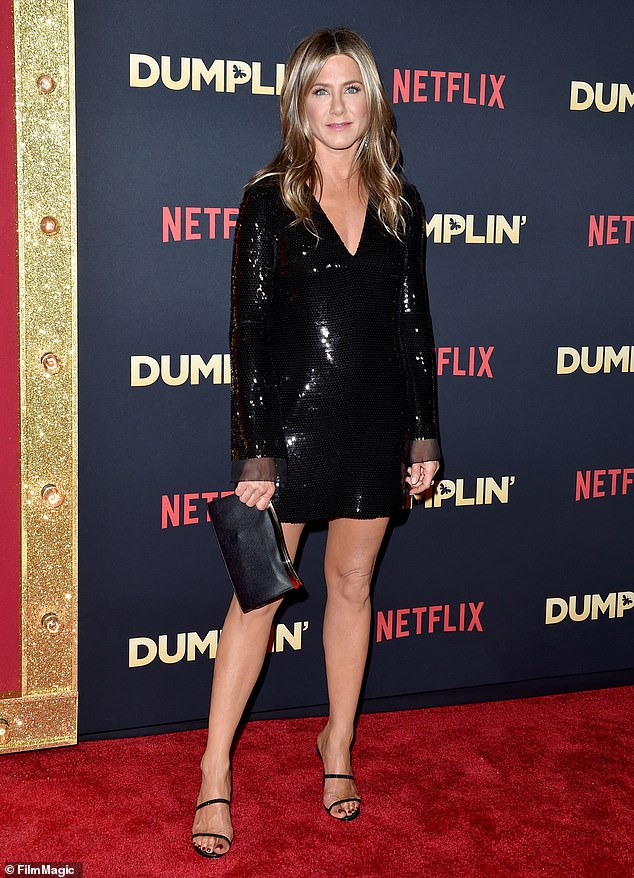 Aniston, who turns 50 on February 11, recently listed her top beauty tips as ‘water, sleep and sunscreen’

‘Jen is someone who is always looking to step it up and boxing is her newest craze,’ says a source. ‘She’s always mixing it up but she never stops working at making herself better on the outside and the inside. She says she feels more confident in her body than when she was in her 20s.’

Hollywood stylist Phillip Bloch, 58, has worked with many of the women on these pages and says their secret is two-fold: ‘They have all the benefits of modern technology at their fingertips. There have been huge steps in anti-ageing potions, lotions, injections, diets and workouts. It takes a team of stylists, nutritionists, beauticians and trainers to look this good.

‘But that takes nothing away from these women. They’ve worked their butts off to stay youthful and they deserve the credit. For our parents’ generation, 50 was over the hill. You were supposed to let yourself go, put on your slippers and become invisible. But now 50 really is the new 30.’

Jennifer Lopez has just finished a ten-day, no-sugar, no-carbs challenge which she shared enthusiastically with her millions of fans on social media, along with jaw-dropping selfies of her rock-hard abs and flawless skin.

The singer credits her Latin genes for her lack of wrinkles but she also sticks to a rigorous diet of no alcohol or coffee, and downs at least three litres of water a day. She avoids the sun too, preferring to use fake tan, and slathers on Dr Hauschka Rose Day Cream (£28.40) and Sjal’s Saphir Concentrate, a £125 ‘liquid silk’ facial oil enhanced with Himalayan blue sapphires and aquamarines which, the manufacturer promises, offers ‘a sublime energy, scent and texture’.

Lopez starts each day chanting an affirmative mantra while looking at herself in a full-length mirror as she repeats: ‘I am youthful and timeless.’ ‘I tell myself that every day, a few times a day,’ she says. ‘It sounds like cliched bull****, but it’s not. Age is all in your mind. Look at Jane Fonda.’ (A jaw-dropping 81.)

At 30: Jennifer Lopez credits her Latin genes for her lack of wrinkles but she also sticks to a rigorous diet of no alcohol or coffee 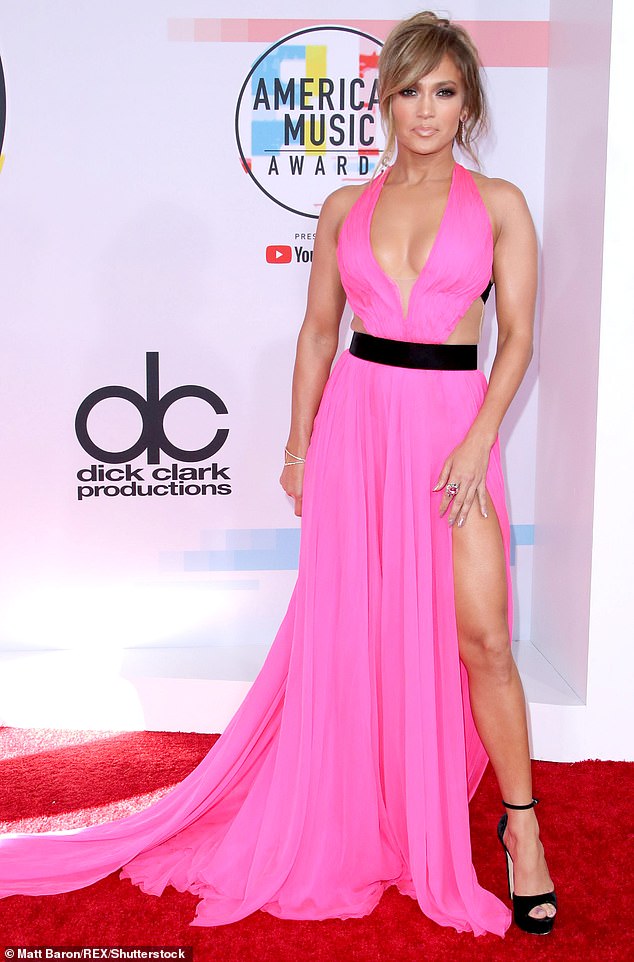 Lopez, who turns 50 on July 24, keeps her famous gravity-defying bottom in shape by working out at least four times a week

Stylist Bloch, who has worked with the singer and actress for the past three decades, says: ‘Jennifer surrounds herself with young people. She knows the latest music, is ahead of the fashion curve, and reads up on the latest health and fitness trends. She works harder than anyone in the room to know exactly what is going on.

‘She never thinks of herself in terms of a number or age. When you see her on stage, she’s dancing alongside twentysomethings and holding her own easily.’

Lopez went grey in her 20s, so she pops into celebrity hair colourist Rita Hazan’s New York salon at least once a month. If work takes her on the road, her colourist will fly to her wherever she is.

Her style has developed over time. While she was once known for her penchant for velour tracksuits, her favourite designers are now Gucci and Lanvin. She loves Herve Leger’s trademark skin-tight bandage dresses.

The star keeps her famous gravity-defying bottom in shape by working out at least four times a week, often with boyfriend, former baseball player Alex Rodriguez, who is seven years her junior. The pair claim to have several personal trainers for sessions in kickboxing, pilates, yoga and gym sessions.

Welsh-born Catherine Zeta-Jones was a bare-faced ingenue when she first hit our TV screens in The Darling Buds Of May in 1991. But since marrying Michael Douglas and winning an Oscar for Chicago, she has become firmly A-list with a beauty regime and £50,000 walk-in wardrobe to prove it.

Zeta-Jones has denied having any plastic surgery and swears the secret to her eternal youth lies in budget beauty products including Moroccan argan oil, which she slathers on her face and hair before she goes to bed. 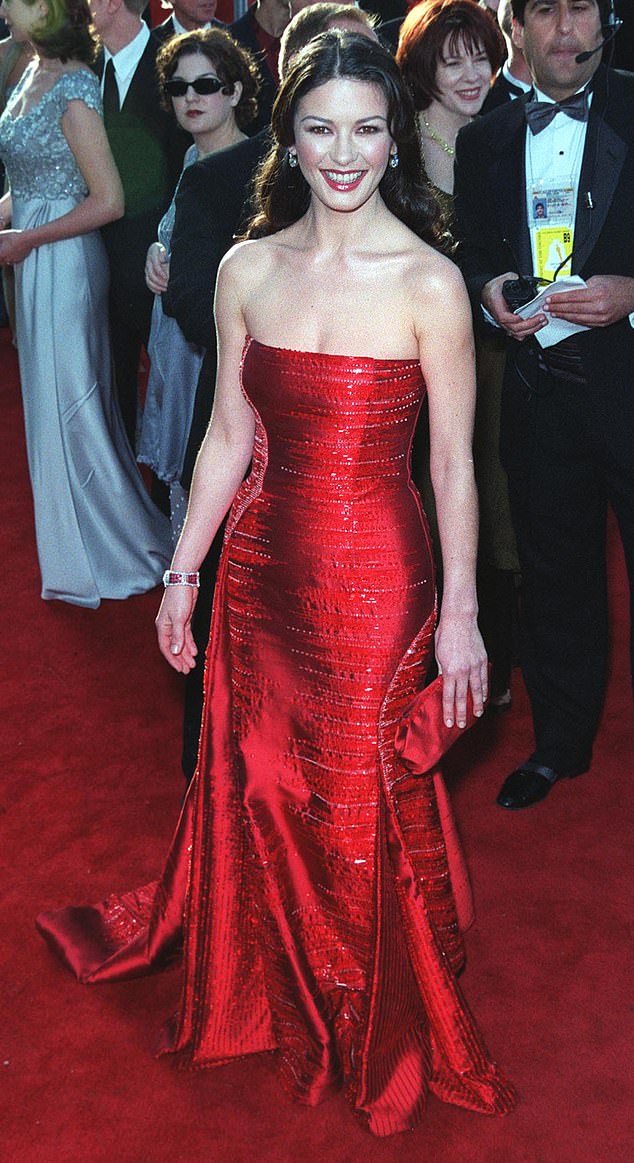 At 30: Catherine Zeta-Jones was a bare-faced ingenue when she first hit our TV screens 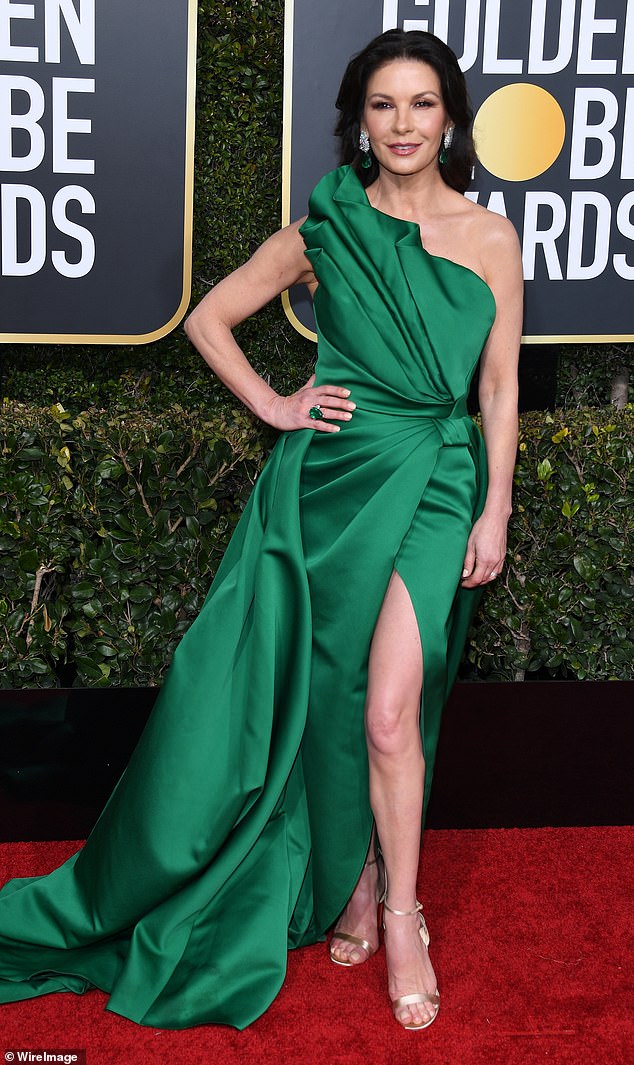 Zeta-Jones, who turns 50 on September 25, has denied having any plastic surgery and swears the secret to her eternal youth lies in budget beauty products including Moroccan argan oil

She uses Elizabeth Arden’s Eight Hour Cream (£16) and sticks to a no-alcohol, low-carb diet ‘which keeps my body free of inflammation inside and out’. Her favourite lip liner is by Rimmel (in Tiramisu) and costs just £2.99.

She started out on the West End stage and still incorporates regular tap-dancing lessons into her daily workouts at her home gym.

Her tastes in clothes and bags are less modest. Last December, she gave her Instagram fans a ‘live’ tour through her sprawling black-lacquered walk-in wardrobe, which showed a weakness for Chanel bags, Hermes scarves and Christian Louboutin stilettos.

She has been a tabloid staple thanks to her turbulent marriages to Brad Pitt and Justin Theroux but one thing that has never changed is Jennifer Aniston’s girl-next-door good looks.

She credits her lack of wrinkles to her ‘Greek genes’ but her complexion is no doubt helped by monthly £400 Clear And Brilliant laser treatments, which use pulsating beams of light to remove layers of skin.

Not every part of her regime is costly however: she recently listed her top beauty tips as ‘water, sleep and sunscreen’ and says she washes her face every morning with a budget-friendly £2.27 Neutrogena Face Cleansing Bar.

Although she created a cult following among women with ‘The Rachel’ haircut in Friends, these days Aniston keeps her longer waves in immaculate shape with trims every six weeks by long-time LA hairdresser Chris McMillan (who invented The Rachel). He also touches up her baby blonde highlights once a month.

Aniston has spoken about using a Unite 7 Seconds Detangler (£16.99), which she spritzes on her hair before leaving it to dry naturally.

She has one of the most enviable bodies on the planet and looks the same in a bikini as she did a decade ago.

She credits her physique to yoga as well as a diet of lean protein with plenty of fruits and vegetables. She claims to snack on frozen grapes and, for a treat, likes Mexican food washed down with margaritas.

‘I eat well and I work out, but I also indulge when I want to.’

A six-year break at her 40-acre farm

As Bridget Jones, the chain-smoking, chardonnay-swilling singleton she brought to life on the big screen, Renee Zellweger bemoaned ‘smug marrieds’ and her ‘wobbly bits’. But as she approaches her half-century, the Oscar-winner has been repeatedly forced to deny she has gone under the surgeon’s knife to maintain her looks.

In an open letter, she said: ‘I did not make a decision to alter my face and have surgery on my eyes. The fact is of no true import to anyone but… that it became a public conversation is disconcerting.’ She added: ‘Perhaps I look different. Who doesn’t as they get older?’

Zellweger blamed her changing looks on her ‘hectic schedule’, saying she lost weight rapidly and experienced puffy skin because she made ‘bad choices’ that ‘didn’t allow for taking care of myself’. 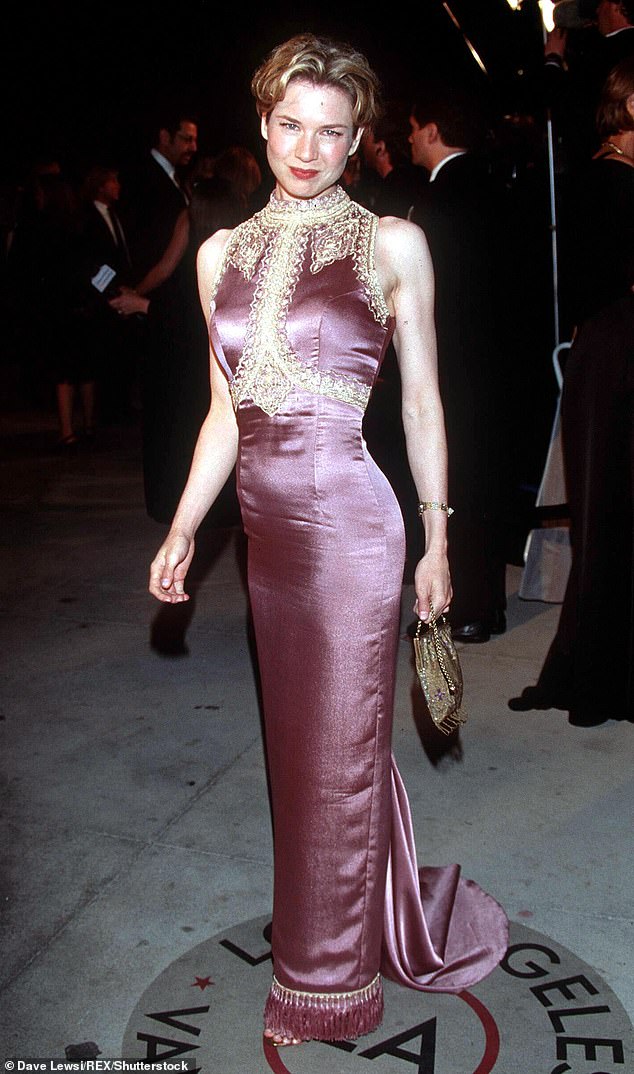 At 30: As Bridget Jones, the chain-smoking, chardonnay-swilling singleton she brought to life on the big screen, Renee Zellweger bemoaned ‘smug marrieds’ and her ‘wobbly bits’

Zellweger, who turns 50 on April 25, took a six-year break from Hollywood and retreated to her 40-acre farm in Connecticut and a beach house in the Hamptons before returning for the final Bridget Jones instalment in 2016

It can’t have helped that she had to gain weight for the three Bridget Jones films. An avid runner, she now maintains her trim figure with a mostly vegetarian diet.

She took a six-year break from Hollywood and retreated to her 40-acre farm in Connecticut and a beach house in the Hamptons before returning for the final Bridget Jones instalment in 2016.

But as soon as she finished promoting that film, she vanished into the shadows once more. She has not been photographed on a red carpet for more than a year, something Hollywood insiders say is intentional.

One told The Mail on Sunday: ‘Renee is in a good place in life but she finds the endless scrutiny over her looks, her weight, everything, just exhausting.’

In a rare interview to promote the last Bridget film, she said: ‘I’ve never seen the maturation of a woman as a negative thing. I’ve never seen a woman stepping into her more powerful self as negative.’

But when it comes to keeping her porcelain skin in tip-top condition, she has a rather unusual secret – she once had a ‘fore facial’ using stem cells taken from Korean newborns. 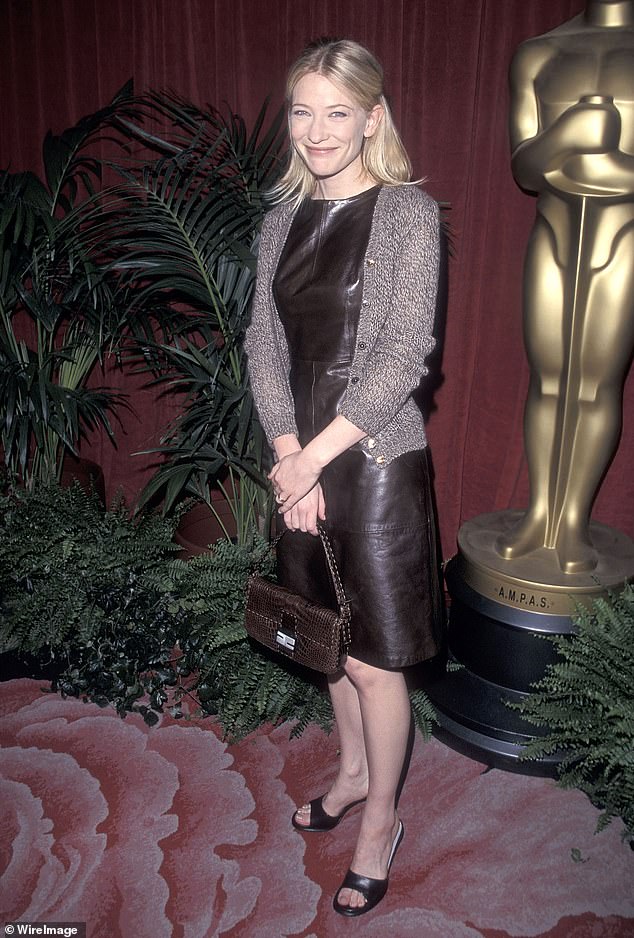 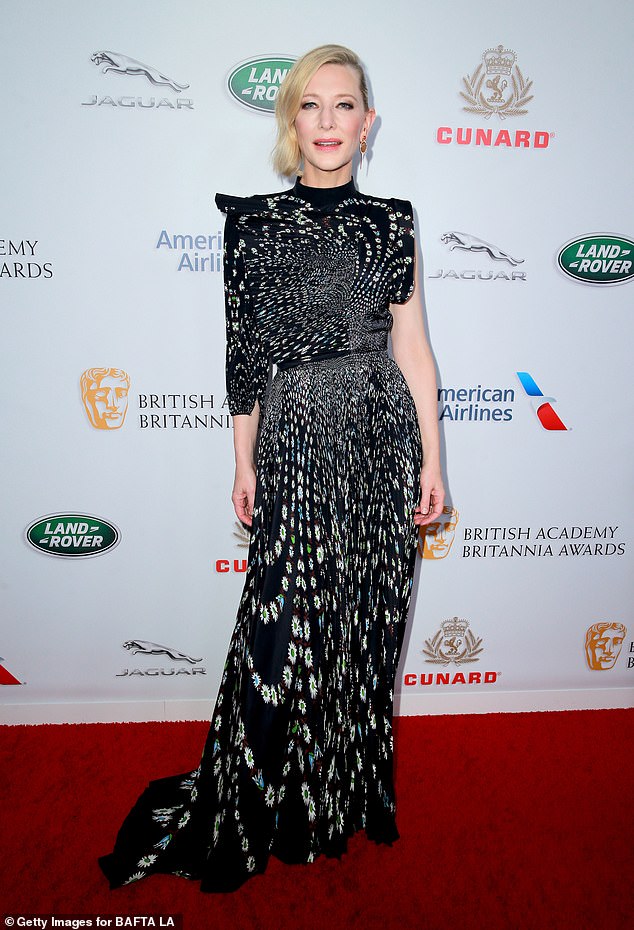 Blanchett, who turns 50 on May 14, puts her complexion down to her mother keeping her out of the sun and says: ‘In the end, if you have all that stuff [surgery] done you just see the work’

It uses a serum – derived from cells taken from the ‘freshly removed foreskin of newborn babies in Korea’ according to the facialist’s website – and is said to help ‘build collagen and elastin and make skin appear younger and glowing’.

Blanchett – currently raising eyebrows in the risque ‘sexploitation’ play When We Have Sufficiently Tortured Each Other in the West End – has described herself as ‘avidly’ anti-plastic surgery.

She puts her complexion down to her mother keeping her out of the sun and says: ‘In the end, if you have all that stuff [surgery] done you just see the work.’

National Enquirer threatened to publish explicit nude photos of Jeff Bezos and his mistress
Chelsea Clinton slams Ilhan Omar for 'anti-Semitic tweet' about Israel
Artist who uses his own urine for his work purchases a slice of Trump's wedding cake
Huge £600million cruise ship is set to bring Chinese tourists to the high seas
Roseanne Barr blames Michelle Obama for getting her fired
John F Kennedy Jr pictured just four days before his fatal plane crash in never-before-seen photo
Winter, what winter? Boston has seen its second lowest amount of January-February snow ever
Why the COVID-19 death toll could be much higher: Only those tested BEFORE they die are counted