England has seen its coldest night of the winter so far as temperatures tumbled across the UK.

A low of minus 11.7C (10.9F) was recorded at Chillingham Barns in Northumberland, the said shortly after 5am on Sunday.

In Scotland, a low of minus 12.6C (9.3F) was seen at Braemar in the Highlands, although it was a few degrees off the minus 15.4C seen there on Thursday. 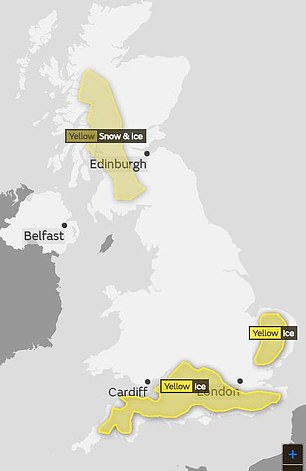 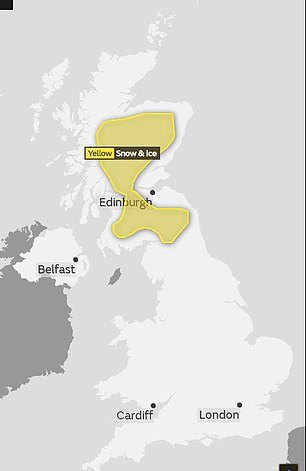 Elsewhere on Sunday morning, the coldest spot in Wales was at Swyddffynnon in Dyfed, where minus 6.5C (20.3F) was seen, while in Northern Ireland the lowest temperature recorded was minus 2.6C (27.3F) in Katesbridge, Co Down.

Forecasters earlier said there was the potential for a low of minus 16C (3.2F) to be seen in eastern Scotland overnight following a blast of cold weather than brought severe disruption to large parts of the country.

Several weather warnings have been issued for Sunday and Monday mornings, although some respite is expected with milder conditions moving in at the start of the week.

Icy stretches will continue to be a hazard in parts of southern England and East Anglia into Sunday morning and a yellow warning is in place until 11am.

Meanwhile there is a warning in place for snow and ice for a swathe of western Scotland reaching from Inverness in the north to the outskirts of Glasgow in the south.

‘Much of the UK’s dry, but across the north-west and west of Scotland there are some snow showers,’ Met Office meteorologist Greg Dewhurst said.

‘There is a weather warning that will be in place from 7am onward as that band pushes eastwards.

‘It will be a cold, frosty start for many and then there is the risk of some more rain, sleet and snow coming into western Scotland by the end of the night into Monday morning.’ 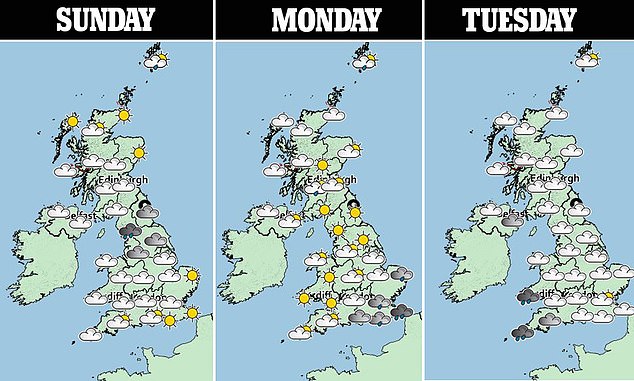 Winnie Harlow collects the award for Breakthrough Model at Daily Front Row's Fashion Media Awards
May is dragged into migrant row after Peer accuses her for scrapping surveillance
Will Smith faces backlash after being cast to play Serena Williams' father in new biopic
Princess Anne pulls the plug on Gatcombe horse trials
Could the AC-12 boss be the corrupt cop known as 'H’? Line Of Duty, by Jim Shelley
Child 'falls off Twister rollercoaster at Lightwater Valley theme park'
Pair of bottlenose dolphins thrill crowds on a passing tourist boats off the Anglesey coast
Even with Thatcher in No10, the early 80s workplace was full of chauvinism, writes DOMINIC SANDBROOK