Campaigners have voiced their fury over a council’s plans to build homes on a playing field – a decade after the local authority warned there was too little green space when the area’s population was virtually half what it is now.

The plan for 34 new homes on the two-acre Cedar Avenue playing field has infuriated residents of the densely populated Bridge Ward in Newark, Nottinghamshire.

And now locals have joined forces with The Mail on Sunday’s Save Our Parks campaign in the hope of blocking the development. 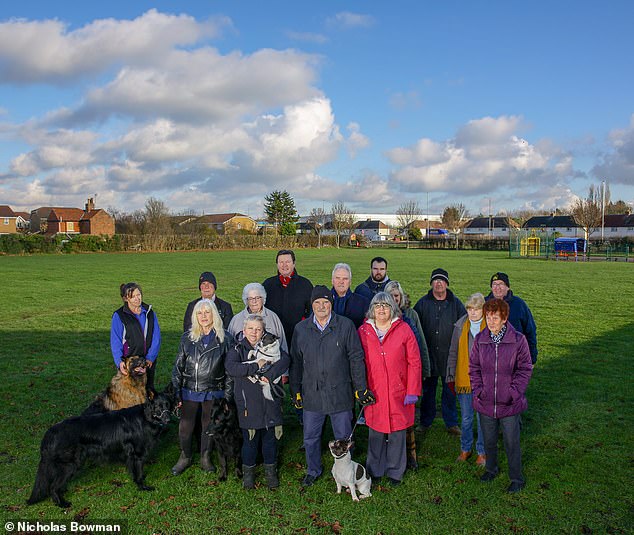 Locals in Newark are outraged that the council are considering ripping up their green area, pictured, and turn it into 34 houses 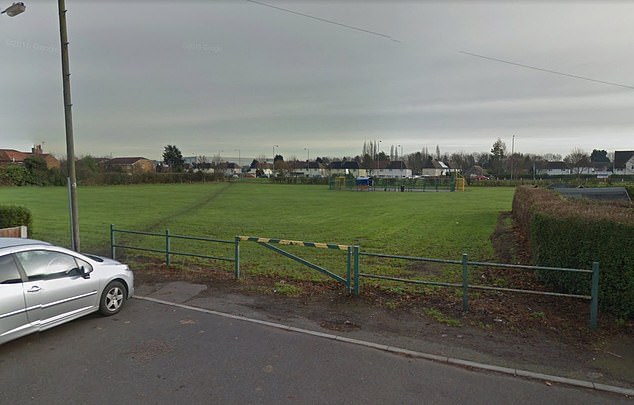 Newark and Sherwood District Council leaders have been accused of betrayal in their seeking to sell off the charity-owned playing field for housing development.

Back in 2010 the council conducted a green space improvement plan which concluded that Bridge Ward was the most deficient in the town in terms of green space.

The land has been neglected for years according to local residents.

The artificial cricket wicket is simply a strip of bumpy concrete and the play area features just two basketball nets. Yet for many local people, it is the one area they can exercise their dogs and socialise.

The land was owned by Sir William Gilstrap, a wealthy Victorian businessman, and passed on to the Gilstrap Charity by his descendants in the 1930s.

The charity sponsors educational and historical initiatives in the town, including at Newark Castle.

But the charity and the council are indistinguishable.

Its trustees are all district councillors and its chairman, David Payne, is also vice-chairman of property management company Newark and Sherwood Homes – set up by the council – and chairman of the planning committee. It is understood that the Conservative-run council has bought the land from the charity and plans to build 34 homes there will be voted on at the end of this month.

‘It is a scandalous situation,’ said Francis Towndrow, a trustee of the Newark Sports Association.

‘The population is rocketing, they know there is a lack of green space and yet they are getting rid of the little that’s left.

‘There has been no scrutiny of what they are doing and we just hope that The Mail on Sunday’s Save Our Parks campaign can help.’

Meanwhile, residents in Exeter are hoping that the Labour city council leaders will reconsider plans for a £9 million housing development that will destroy a wildlife haven.

Protesters who have banded together as the Save Clifton Hill Green Space group say the plan will rob residents of much-loved open space within a dense area of housing.

Last year the council decided to sell the land currently occupied by the Clifton Hill sports centre, a golf driving range and ski slope. The green space is also used by families with children and dog walkers.

A report by strategic director Jo Yelland, due to go before the ruling Labour executive next week, says £9 million could be raised from a housing developer.

She says the decision to sell has permitted the council to allocate £3 million in advance for repairs to other leisure sites, almost two-thirds of which has already been spent.

Local residents claim their views are being ignored by the council.

In a statement to The Mail on Sunday, Exeter City Council said it was putting millions of pounds into ‘green infrastructure’ and had acquired 13 more acres of ‘green land’ for residents within the past 18 months.

The MoS campaign demands new rules and investment to protect council-run parkland, including banning development on the land and setting up a central Government fund to help sites most at risk.

Leaseholder is locked in legal battle after freehold property owner seizes his £600,000 London flat
Pope OKs beatification for US brother slain in...
Action for Children releases images of first youngsters it took in to try and trace their ancestors
Peregrine falcon scoops up a parakeet in mid-air over south London then takes it home
Top U.S. diplomat in Ukraine will testify today in Donald Trump impeachment inquiry
China extends its New Year holiday to fight killer coronavirus outbreak
Stalker terrifies ex-girlfriend by living in her garden shed for five days without knowing
UK-financed projects in Scotland will fly a Union flag as Boris Johnson battles independence drive