Many New Yorkers have thrown style out the window while braving the below-freezing temperatures this week, but Savannah Guthrie couldn’t help but mock her bold polar vortex look.

The 47-year-old Today anchor took to on Friday to share a photo of herself smiling brightly while modeling a bright red winter jacket and matching leggings.

‘When you inadvertently dress like the Elf on the Shelf for school pickup #polarvortex,’ she captioned the image, which was taken in her Manhattan apartment. 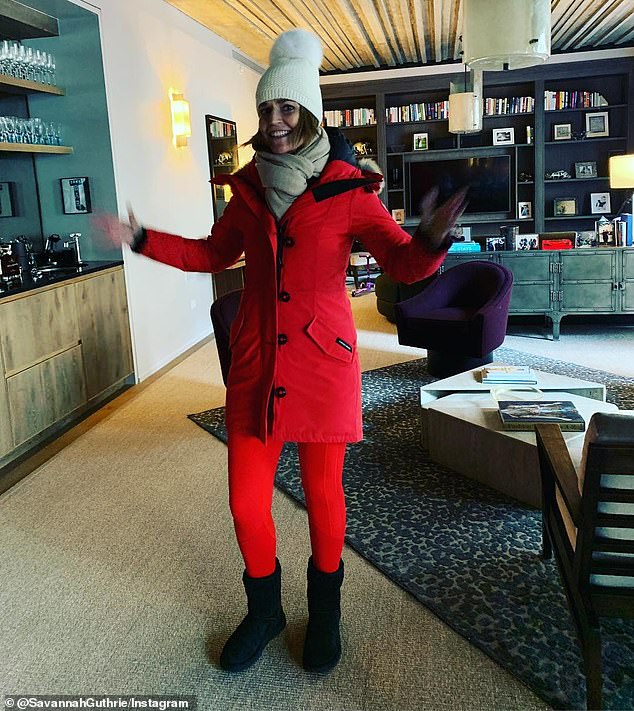 Bold look: Savannah Guthrie, 47, took to Instagram on Friday to share a photo of herself modeling a red winter coat and matching leggings 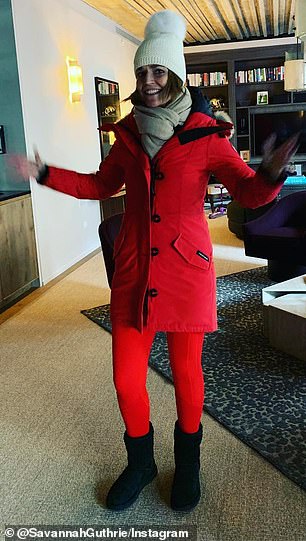 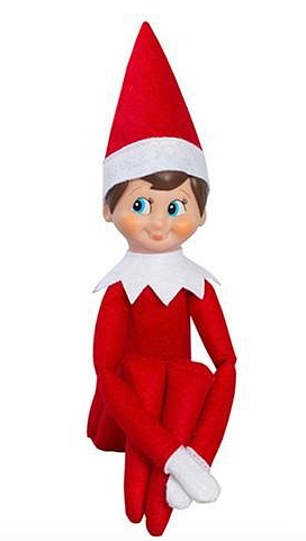 Poking fun: The Today anchor pointed out that she looked like a real-life Elf on the Shelf

The mother-of-two snapped the photo before heading out to pick up her daughter, Vale, four, and son, Charley, two, from school after appearing on the Today show earlier in the day.

With her all-red outfit, black Ugg boots, white knit hat, and tan scarf, Savannah looked like a real-life Elf on the Shelf.

Savannah’s co-star and friend Jenna Bush Hager commented on the post, sharing heart and fire emoji to show that she approved of the eye-catching outfit.

‘[It is] National Wear Red Day, so it’s perfect for today,’ another person wrote.

February is American Heart Month, and the first Friday of the month has been designated as National Wear Red Day to raise awareness for women’s heart health. 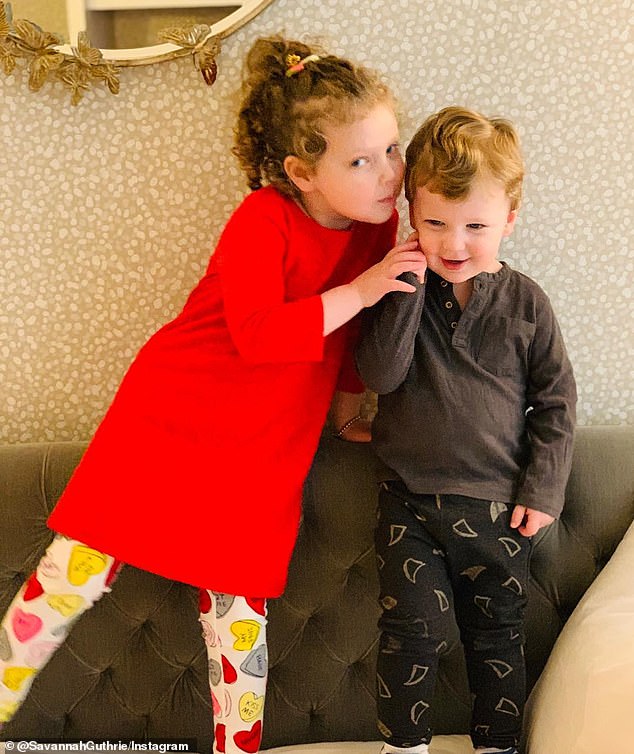 Little ones: The mother-of-two snapped the photo before heading out to pick up her daughter, Vale, four, and son, Charley, two, up from school 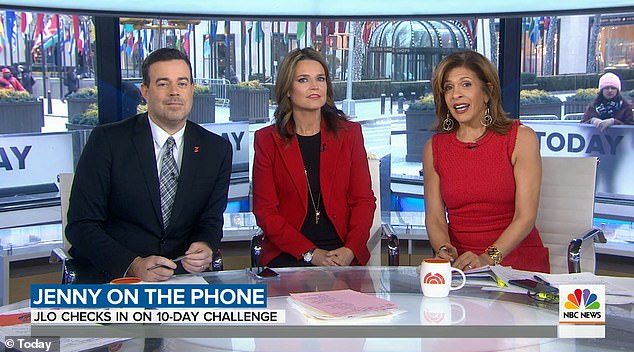 Coincidence? It’s unclear if Savannah’s all-red outfit was in honor of National Wear Red Day, but it seems likely, as the Today star also sported a red blazer earlier in the day

It’s unclear if Savannah’s all-red winter outfit was in honor of National Wear Red Day, but it seems likely, as the Today star also sported a red blazer on the show earlier in the day.

Nearly two weeks ago, Savannah was enjoying a winter weekend getaway with Jenna, Siri Daly, and their families in Rhinebeck, New York.

Savannah posted a snapshot of herself posing with Jenna, 37, and Siri, 38, as they showed off their matching green T-shirts, which had the words ‘Upstate of Mind’ splashed across the top in white.

‘I will be remaining upstate of mind until further notice,’ she captioned the image, but that wasn’t the only matching that was going on.

The Today star also posted a series of images of the moms posing on the couch with their daughters in matching pink heart pajamas. 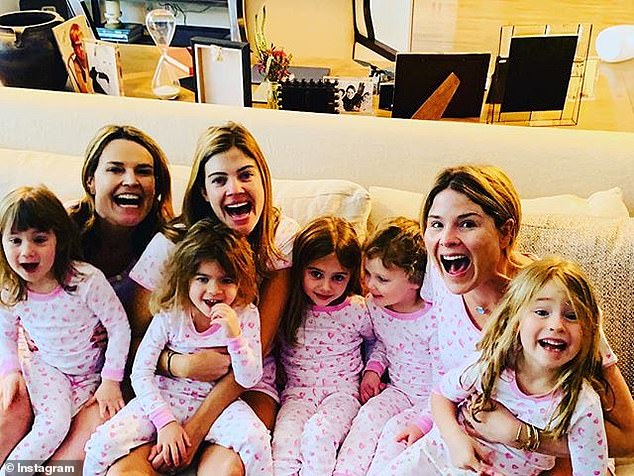 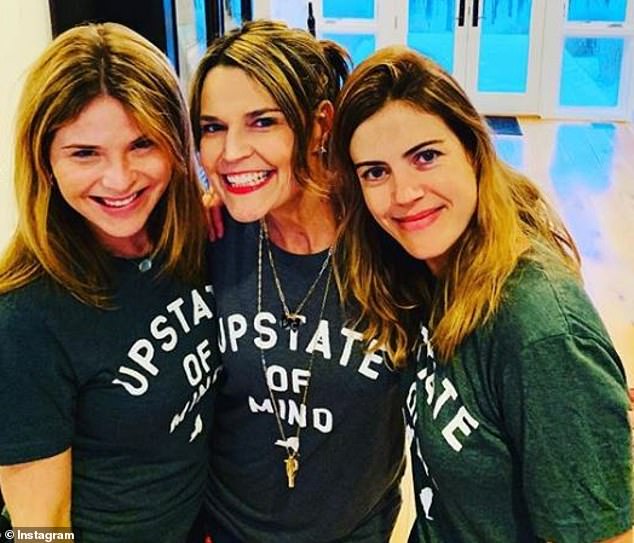 ‘Matching by day and by night #upstateofmind,’ Savannah captioned the group images, which show them laughing and smiling.

Jenna posted a similar snapshot, hinting that the moms may have also been joined by their husbands.

Another snapshot from the day shows just the moms posing in their matching PJs inside the snow-covered vacation home.

Savannah, Jenna, and Siri, a Today food contributor, are as close as can be and love spending time with each other on and off the Today show set.

Demi Lovato puts Hollywood Hills home where Oxycodone overdose took place on market for $9.5million
Mel B needed surgery after suffering from TWO broken ribs and a 'SEVERED' hand in mysterious injury
British engineers complete milestone test of their new high-speed 'spaceplane'
Celebrities swear by them... but can your birthstone make you sparkle?
African leaders gather for Robert Mugabe funeral in Zimbabwe's capital Harare
Reputed Lucchese mobster mugs for camera with 95-year-old granny and '20 or so pounds' or marijuana
Toddler, two, who went missing for two hours in the Oregon wilderness is found safe
US forces ALL passengers from Wuhan, China to change their flights and get screened for coronavirus