At least 18 deaths are now being blamed on the bitterly cold weather amid the deadly polar vortex wreaking havoc across the United States.

Among those dead are a FedEx worker found between two tractor-trailers at a delivery facility in western Illinois and a man found frozen solid in his backyard in Milwaukee.

Rock Island County Coroner Brian Gustafson says Murphy’s death ‘appears to be medical or natural’ and that an autopsy scheduled for Monday will determine if the frigid temperature played a role.

The company said: ‘We are saddened by the loss of our team member and our sympathies go out to his family and friends.’

The Milwaukee County Medical Examiner’s Office responded to a home in Cudahy on Thursday after a man was found dead in his backyard. It was the same day temperatures plunged to record lows in several Midwestern cities.

No details about the man or what preceded his death were immediately released. An autopsy is scheduled.

Officials have also confirmed the University of Iowa college student found dead just before 3am on Wednesday near his dorm likely froze to death.

The deaths being blamed on the historic deep freeze have occurred in eight states, from Iowa to New York. 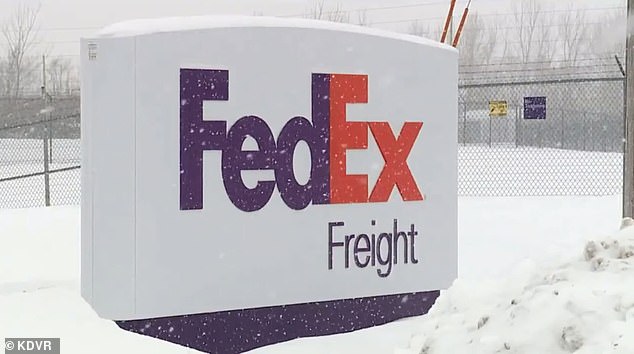 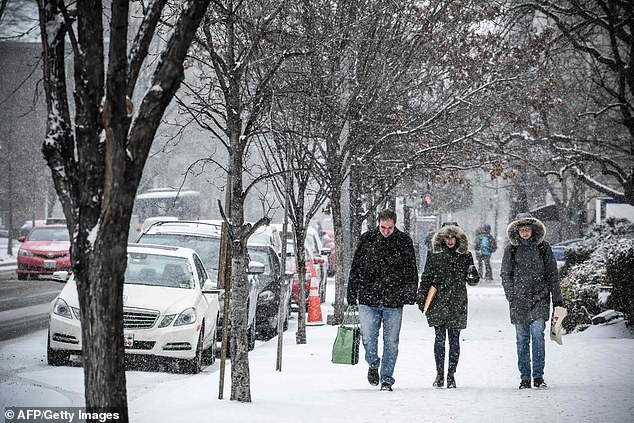 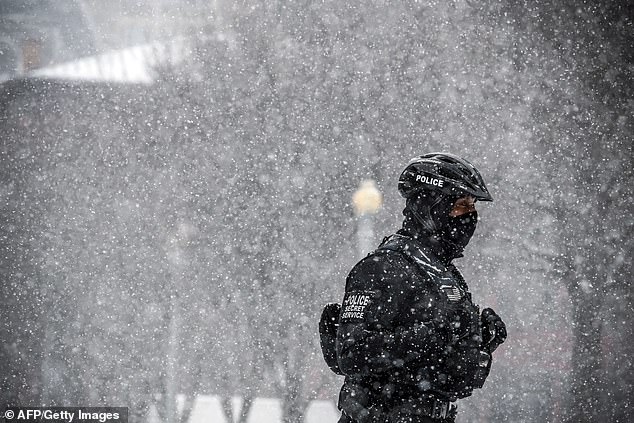 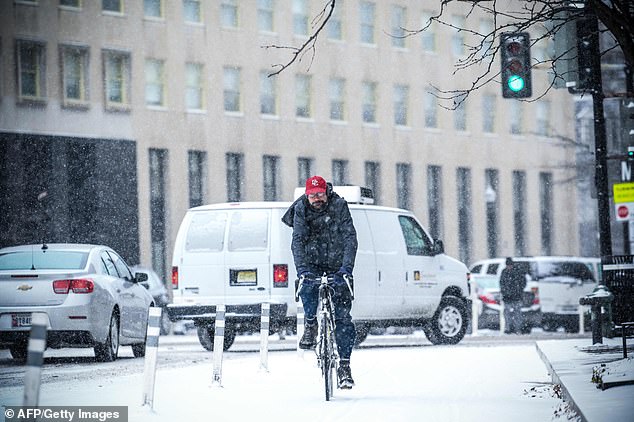 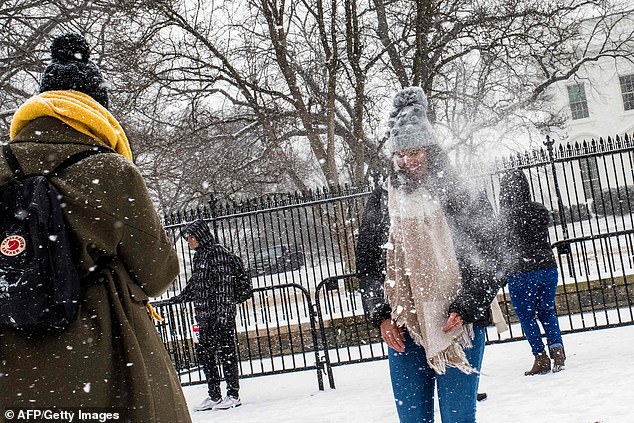 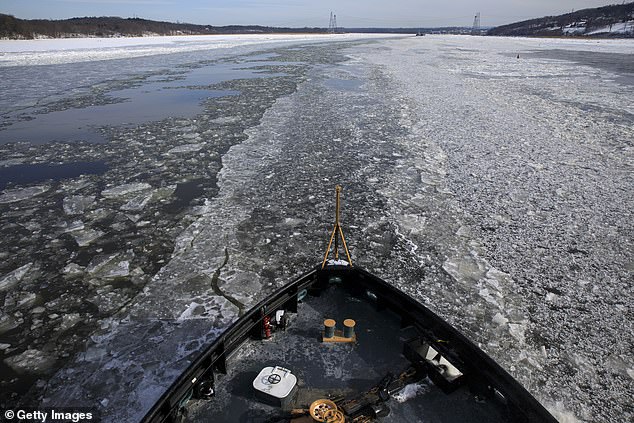 An icebreaking tugboat of the U.S. Coast Guard cuts through ice as it makes its way north on the Hudson River between the cities of Kingston and Albany on Friday

Authorities in Minnesota’s Carver County say they received a report of a car accident on Monday evening. They arrived and found a vehicle off the roadway. Forty-six-year-old Amy Debower of Chaska was found dead outside the vehicle.

Carver County Sheriff Jason Kamerud says a preliminary investigation suggests the extreme weather may have been a factor in Debower’s death. The investigation is ongoing.

A 90-year-old woman has died in the extreme cold after locking herself out of her home in southwestern Michigan.

says Ada Salna was found covered with snow on the steps of her home Wednesday near Three Rivers in St. Joseph County. Pathologist Joyce deJong says Salna died of hypothermia. Blood loss from a cut also contributed to her death.

The TV station says Salna was feeding birds when she was locked out.

Authorities said the body of student Gerald Belz was found behind an academic hall in the early hours of Wednesday by campus police.

The 18-year-old was taken to a hospital, where he was pronounced dead. The university said in a statement to that police think Belz’s death was linked to the weather and do not suspect foul play.

The National Weather Service says the wind chill in Iowa around 3am was -51F.

Belz’s family said their son was studying pre-med and that he had just graduated last May from Cedar Rapids Kennedy High School. His family told that doctors did not find alcohol in his system. 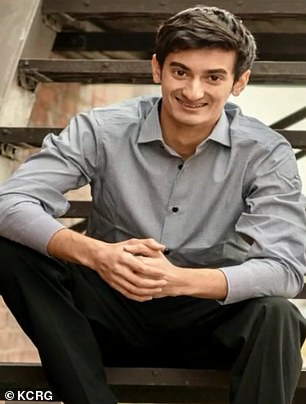 The deadly polar vortex wreaking havoc across the US has left at least 18 people dead, including college student, Gerald Belz

Authorities in New York say the death of a homeless man whose frozen body was found in a suburban Buffalo bus shelter might be related to the arctic cold that has blanketed much of the northern U.S. this week.

An autopsy was planned to determine whether the man found in the village of Williamsville froze to death or died of another cause. His name wasn’t immediately released.

In Indiana one person died early Friday morning in a crash involving a salt truck on the Interstate 70. Indiana State Police Sgt. John Perrine told  that the crash happened about 6:15 a.m. Friday near Monrovia in Hendricks County.

Perrine says the Indiana Department of Transportation salt truck pulled over due to a mechanical issue and its hazard lights were on. He says another vehicle struck the truck’s rear and the person in that vehicle died.

The crash happened as a storm moved across Indiana, bringing up to three inches of snow. It follows a deep freeze that saw temperatures as low as minus 25F (-31 C) in LaPorte on Thursday morning. 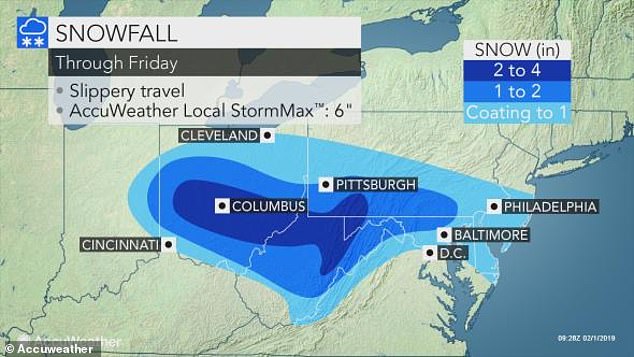 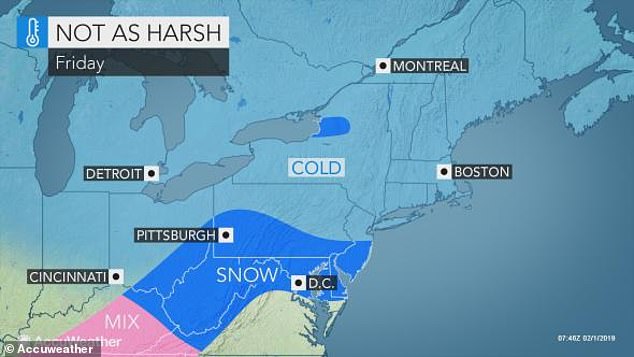 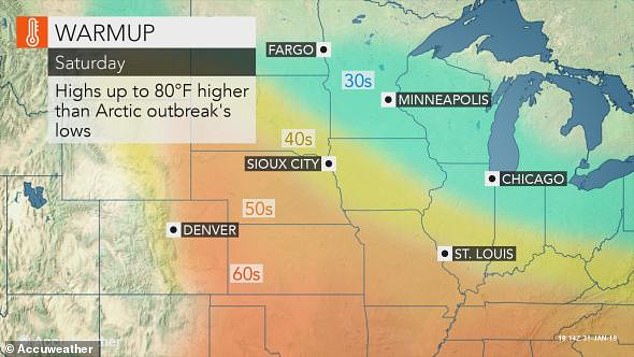 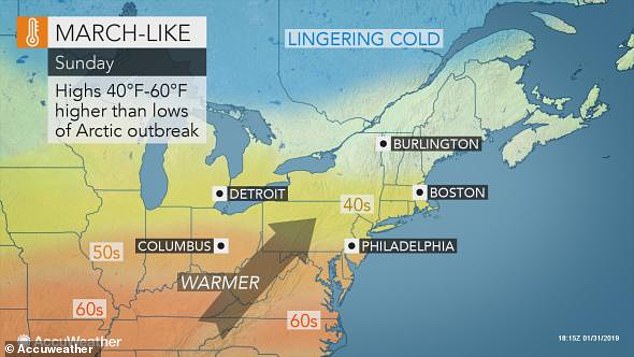 Experts say the rapid thawing is unprecedented and could create problems of its own such as bursting pipes, flooding rivers and crumbling roads 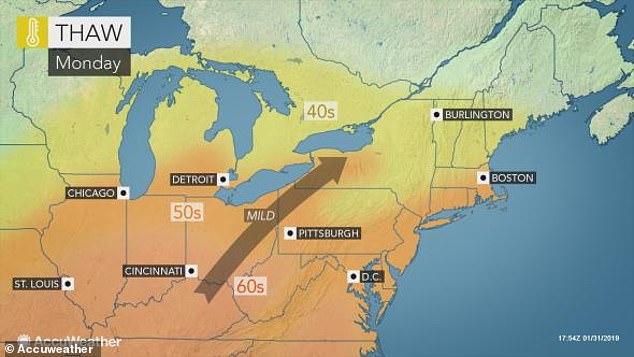 Past cold waves have not dissipated this quickly according to forecasters

The frigid conditions are starting to ease, and a dramatic swing of as much as 80 degrees was expected within days in parts of the region.

Water main breaks and burst pipes have disrupted operations at several facilities in Michigan amid bitterly cold weather, including a Detroit court and a university library.

Similar problems are expected amid a rapid thaw. A flood warning remains in effect along the Muskegon River in western Michigan due to an ice jam.

Forecasts say the region will see a rapid thaw over the next few days, with temperatures climbing. Experts say the swing is unprecedented, and it could create problems of its own such as bursting pipes, flooding rivers and crumbling roads.

Jeff Masters is meteorology director of the Weather Underground firm. He says past cold waves have not dissipated this quickly.

Rockford, Illinois, saw a record-breaking minus 31F (minus 35 Celsius) on Thursday but should be around 50F (10 Celsius) on Monday. Other previously frozen areas can expect temperatures of 55F (13 Celsius) or higher. 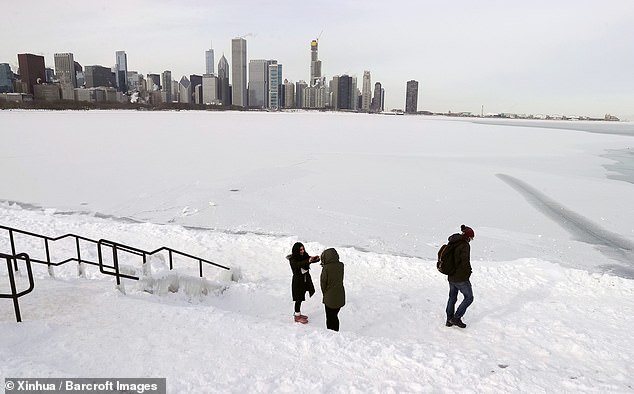 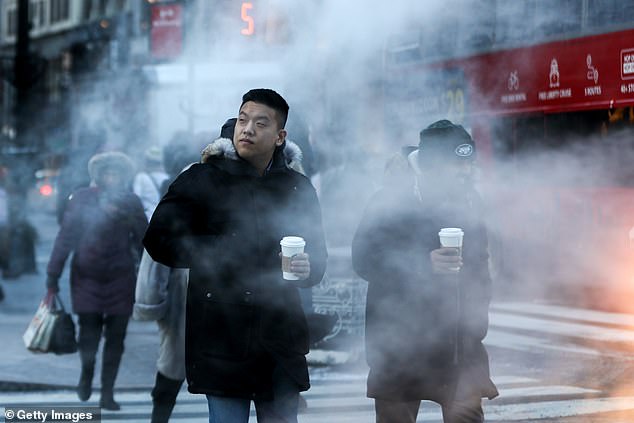 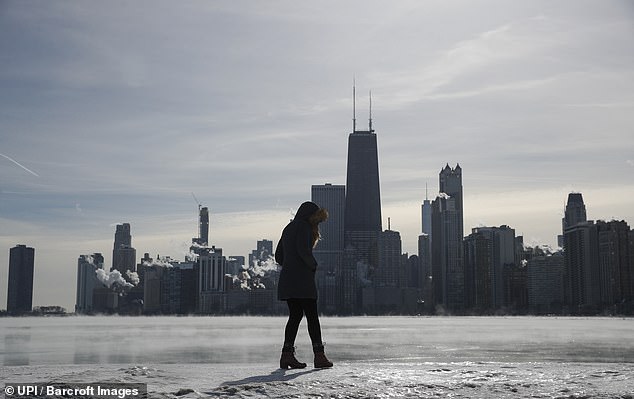 1. Gerald Belz, 18, was found dead on the University of Iowa campus at 3am on Wednesday. The wind chill in Iowa when the pre-med student was found was -51F degrees.

2. Police found a man’s body across the street from his home in the Detroit area on Tuesday. He was not wearing a hat or gloves and wasn’t dressed for below-zero temperatures.

3. Gary Sammons, a 70-year-old man, was found dead in Detroit in front of a neighbor’s home on Tuesday.

4. An 82-year-old central Illinois man died in the cold weather after authorities say he was found by a neighbor several hours after he fell trying to get into his home.

5. A Milwaukee woman, 38, was found frozen in her unheated apartment on Wednesday.

7. The body of a Michigan man, 60, was found outdoors in freezing conditions.

8. A 55-year-old man also froze to death in his Milwaukee garage after he collapsed shoveling snow.

10 & 11. A young couple were killed when their SUV struck another on a snowy road in northern Indiana.

12. A man was fatally struck by a snow plow in Chicago.

13. A homeless man known to locals as ‘Larry’ was found dead in a bus shelter in Buffalo, New York on Thursday.

14. A man found frozen in his backyard in a Milwaukee suburb on Friday.

15. Driver died early Friday morning in a crash involving a salt truck on the Interstate 70 in Indiana

17. Amy Debower, 46, of Chaska was found dead outside her vehicle in Minnesota’s Carver County

18. Woman, 90, died in the extreme cold after locking herself out of her home in southwestern Michigan

'The US paid a price': John Kerry says Obama should have enforced his 'red line' warning in Syria
Britain's ex-spy chief claims friends of Saudi prince ordered murder
How to dress like a grown up with Shane Watson: You CAN do cord without putting on half a stone
Pete Davidson under fire for mocking Dan Crenshaw
Porsche Taycan is the German brand's first all-electric sports car
Black market cannabis vapes are found to contain hydrogen CYANIDE
Dozens of LifeAustin parishioners publicly worship for the first time in six weeks
NBA announces zero players have tested positive since July 13 while staying at Disney World