Is there such a thing as too much snow?

Keen skiers and snowboarders – and manufacturers of winter equipment – might not think so, but some of the residents of the cities in this ranking may, conceivably, beg to differ.

Here we reveal the snowiest major cities across the world, ranked in reverse order of snowy-ness, according to AccuWeather. It’s just the cold hard facts… 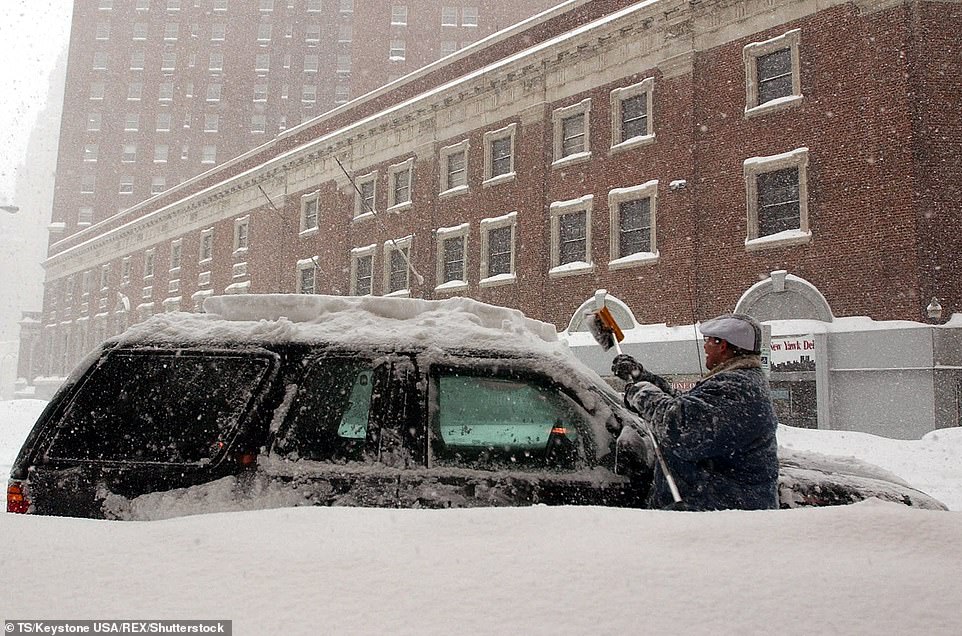 Situated at the head of the Niagara River, Buffalo (pictured) in upstate New York gets an average of just under eight feet of snow each year

Situated at the head of the Niagara River, Buffalo, in upstate New York, rounds off the list in 10th place with an average of just under eight feet of snow each year.

Most of the snow falls between December and March.

The only exception to this was in 2015, when strong El Nino winds meant no measurable snow fall. 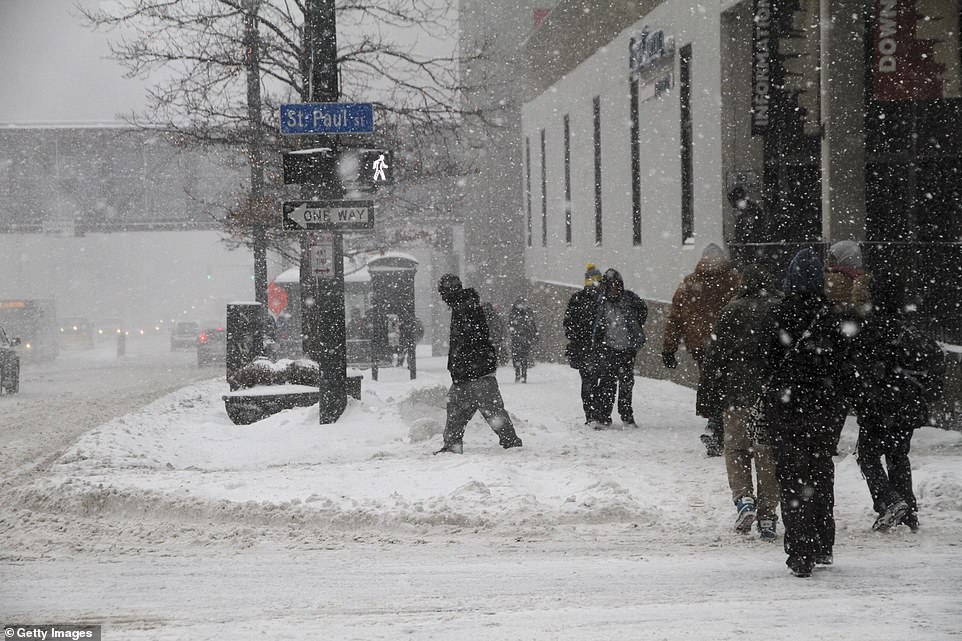 Located in upstate New York, Rochester makes the list in ninth place with an average annual snowfall of just over eight feet.

However, in the summer, temperatures can climb up to around 29 degrees Celsius. 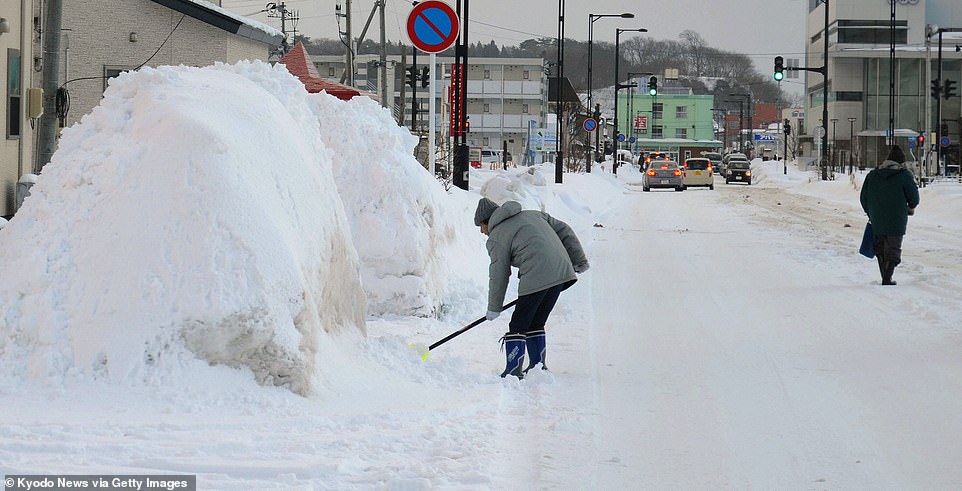 Akita, pictured, on the north west coast of Japan’s Honshu island is the eighth snowiest city

Akita on the north west coast of Japan’s Honshu island is the eighth snowiest city with an average annual snowfall of just under nine feet.

The city is home to several ski and snowboarding resorts thanks to its mountainous location. 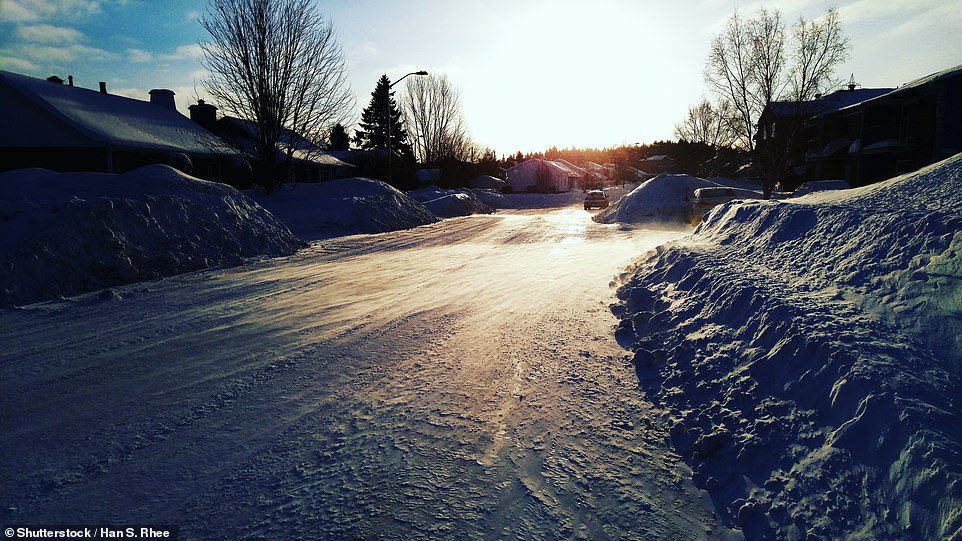 Snow is piled up at the side of the road to allow cars to pass in Saguenay, Canada. The cold winter temperatures in the city are partly caused by the cold waters of the Labrador Current coming from the North Atlantic

In seventh place is Saguenay in Quebec, Canada, which sees an average snowfall of 10.25 feet each year.

The cold winter temperatures in the city are partly caused by the cold waters of the Labrador Current coming from the North Atlantic.

Saguenay is well known for offering winter pursuits such as snowmobiling, ice fishing and snow-shoeing. 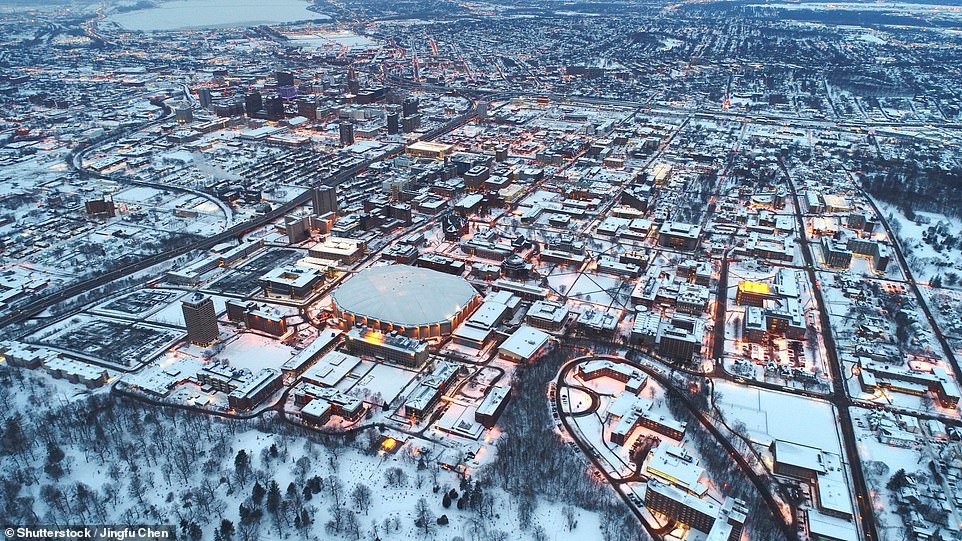 Syracuse usually sees an average of 10.3 feet of snow each winter as it is close to Lake Ontario and is often hit with nor’easter cyclones.

The city is home to one of America’s most prestigious universities but despite the harsh winters, students rarely get a snow day. 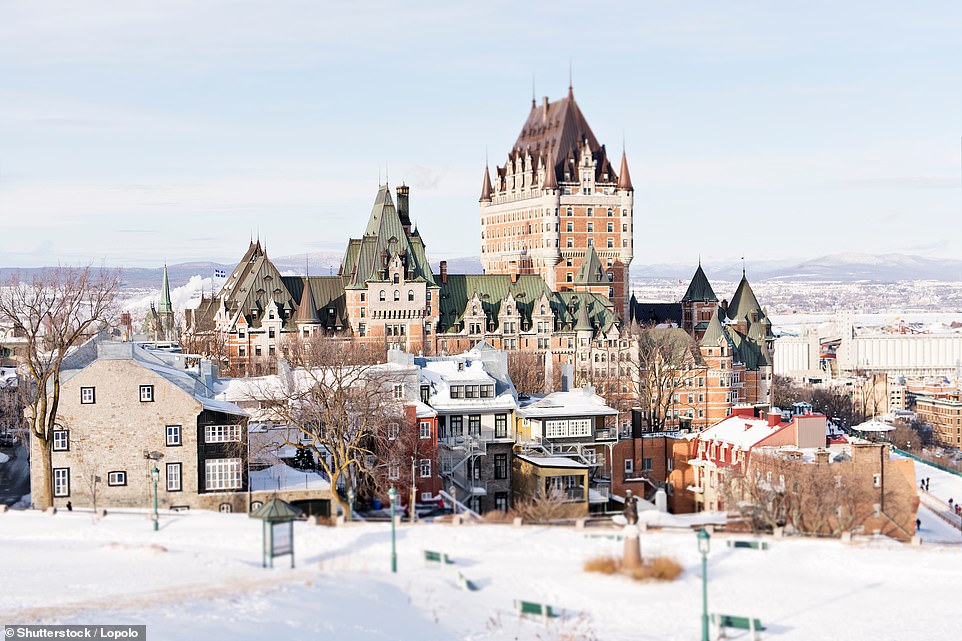 Quebec City, the capital of the Canadian province of Quebec, shares fifth place in the list. Pictured is the snow lying across the beautiful Chateau Frontenac

The capital of the Canadian province of Quebec shares fifth place in the list of the snowiest cities in the world with an average of 10.3 feet of snow each year.

Snow usually falls in Quebec City between December and April.

To celebrate the heavy snow, each year a winter carnival is held in February that includes snow displays and flashing lights. 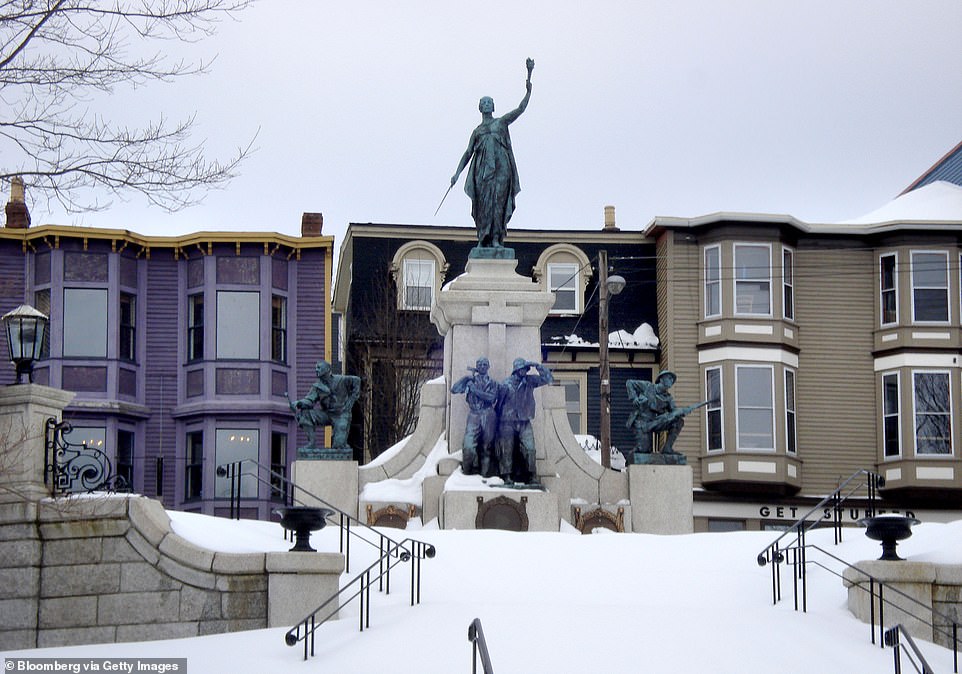 The war memorial in St John’s, Newfoundland, in Canada, covered in snow. As usual. St John’s is known for its extreme weather and also holds the title for the foggiest, windiest and cloudiest Canadian city

St John’s on Newfoundland island in Canada experiences an average of just under 11 feet of snow each year.

The area is known for its extreme weather – St John’s also holds the title for the foggiest, windiest and cloudiest Canadian city.

The coldest month here is February, where average temperatures can dip as low as -8.6C. 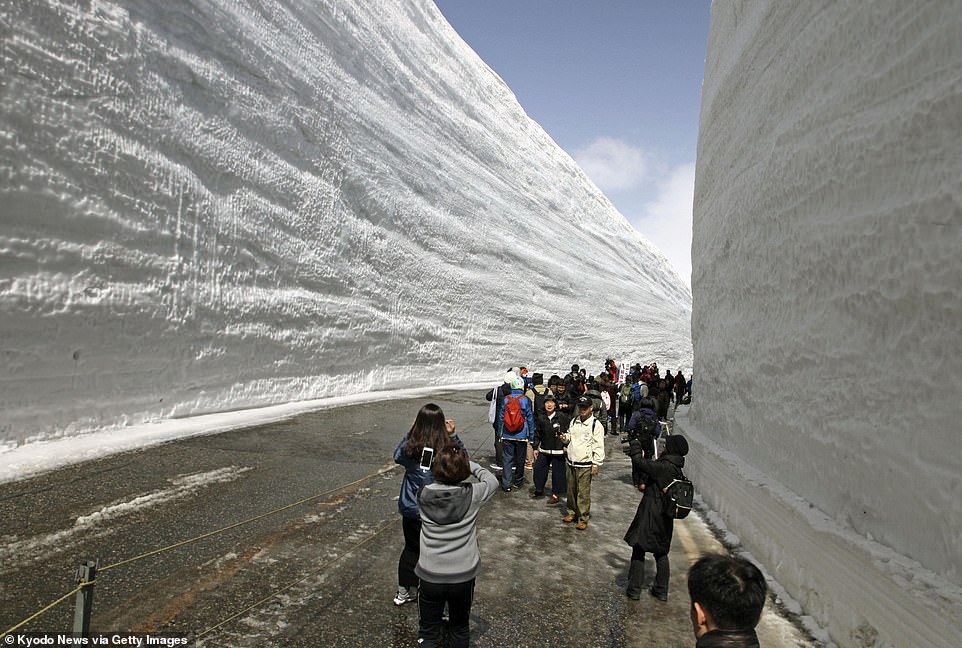 Toyama gets an average of just under 12 feet of snow each year. Pictured are tourists walking through snow walls there, which can reach 17 metres (55ft)

The third snowiest city in the world and Japan is Toyama, located on the country’s west coast, which receives an average of just under 12 feet of snow each year.

In the summer, Toyama has a humid subtropical climate but between December and March, the mercury plummets and this is when most of the snow falls. 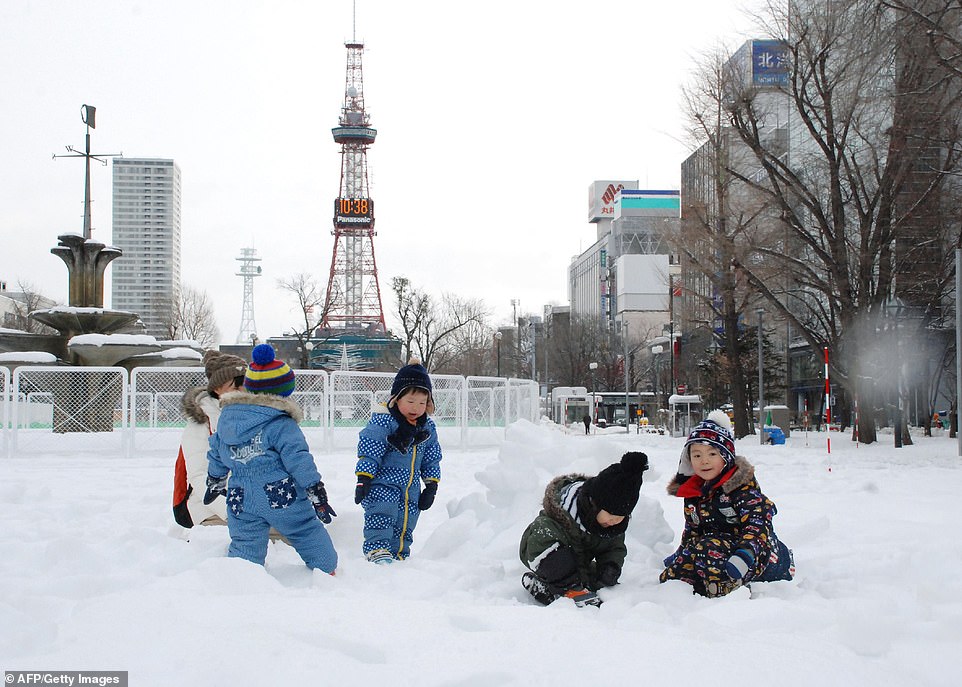 Young children enjoy playing in the snow in a park in Sapporo, Japan – the second snowiest city in the world. It receives and average of 16 feet of snow per year

Sapporo, on the island of Hokkaido, is the second snowiest place in the world with an annual average of 16 feet of snow.

The airport there is used by skiers and snowboarders heading to the world-famous Niseko ski resort, which is known for its huge quantities of powder, often thigh-deep even on the runs.

The Sapporo locals use the snow to their advantage by staging the annual Sapporo Snow Festival, where people flock to see ice sculptures and snow statues. The city staged the Winter Olympics in 1972. 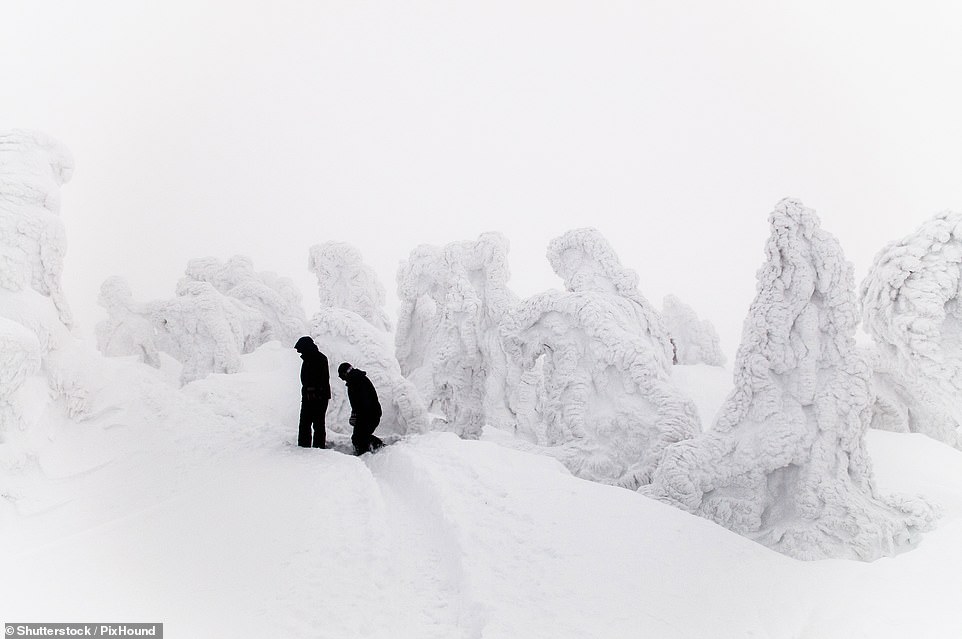 A pair of tourists wade through heavy snow on Mt Hakkoda, which is 18 miles to the south of Aomori City. The trees, when they are covered in the white stuff like this, are known locally as ‘snow monsters’

Situated on the northern coast of Japan’s Honshu island, Aomori City takes the title for being the snowiest city in the world – with an average annual snowfall of 26 feet.

Most of the white stuff falls between November and April and the snow-ploughed roads in the surrounding countryside during these months become dramatic ‘snow corridors’.

Meteorologists say that Aomori’s heavy snowfall is the result of colliding winds and rapidly rising and cooling air, which accelerates cloud formation, and cold weather systems from north-east Asia. Its record low temperature is -24.7C in 1931.