In sickness and in health, that was Chinese man Zhang Jiafeng’s promise to his girlfriend, and he kept it.

Devoted Jiaoyu, who had dated Xiaoyu for a year, refused to leave his girlfriend behind. He took care of her in hospital day and night – even after doctors said she had little chance to be conscious again. 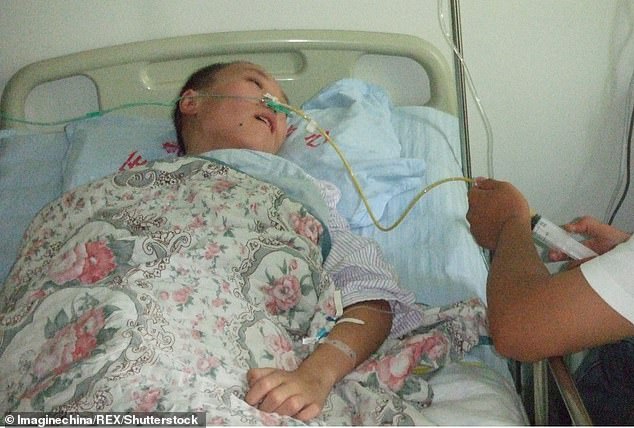 Zhang Jiafeng looked after his girlfriend Zhang Xiaoyu for two years when she was in a vegetative state. He massaged her every day and fed her food using a syringe (pictured) 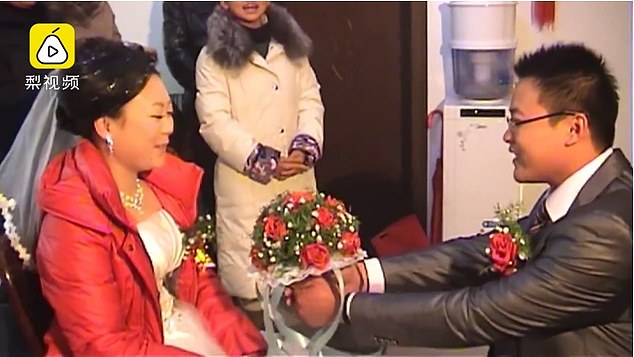 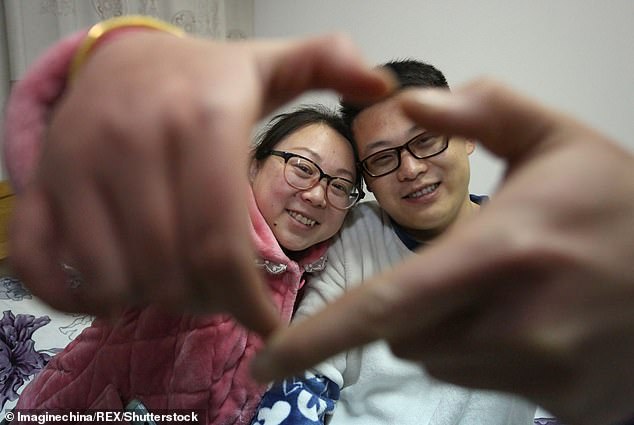 One day two years later, Xiaoyu showed signs of consciousness, and the first thing she said was her boyfriend’s name.

The couple got engaged two years later and are now living a happy married life in their hometown in eastern China.

The incredible story took place between 2008 and 2010 in the city of Bengbu in Anhui Province. But it only became known to the public last year when Jiafeng was awarded by the Chinese authority for his dedication towards his partner.

According to Chinese media, Jiafeng and Xiaoyu were classmates in middle school and the two fell in love in 2007 when they were both 19 years old. 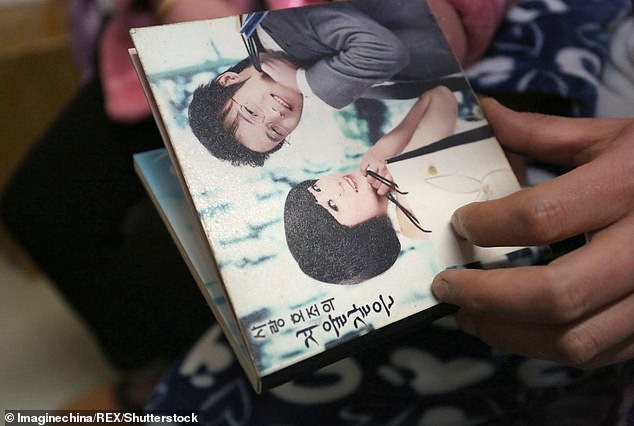 Jiafeng took Xiaoyu to have a set of glamour photos (one featured in the picture) taken in 2010 after she gained conscious and largely recovered. They got married two years later 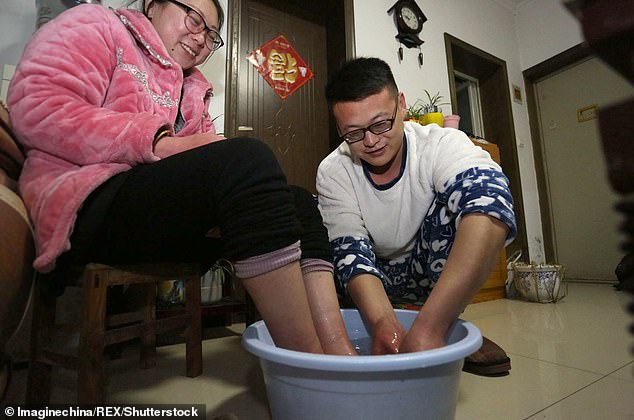 A decade later, Jiafeng still does whatever he could to look after Xiaoyu. He opened a restaurant so they could have steady income. He is pictured washing Xiaoyu’s feet

On one fateful day in 2008, 20-year-old Xiaoyu suddenly collapsed and was rushed to hospital. She was diagnosed with hydrocephalus – a build-up of fluid in the brain – and needed emergency surgery.

The news left Xiaoyu’s family and her boyfriend completely devastated. But instead of breaking up with her, Jiafeng insisted he stay to take care of his partner.

Xiaoyu’s mother, Zhu Jianmei, was reluctant to let Jiafeng shoulder the task at first and suggested Jiafeng should find a new girlfriend.

Speaking to reporters, Ms Zhu explained her logic at the time: ‘His family are from rural China and his parents had sacrificed a lot to nurture him to be a university graduate.

‘In addition, on what grounds could we allow him to stay and (look after Zhang Xiaoyu)?’ 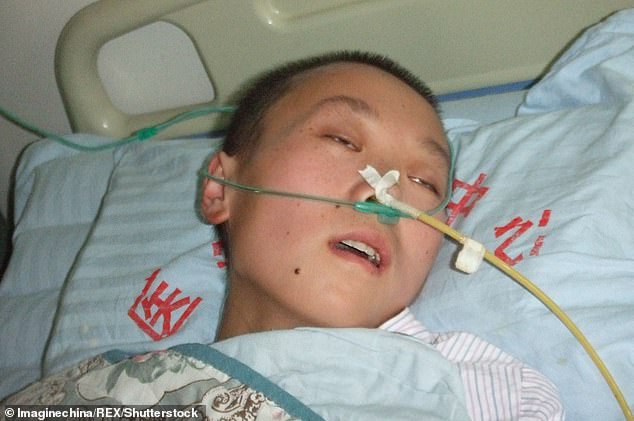 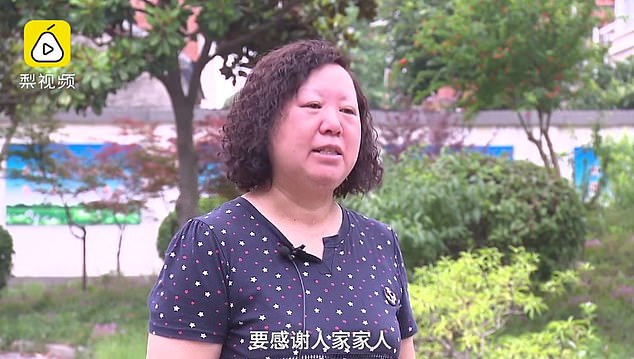 Xiaoyu’s mother Zhu Jianmei (pictured) said she was reluctant to allow Jiafeng to stay and nurse Xiaoyu at the beginning. She told Jiafeng it was not possible for them to keep ‘dating’ 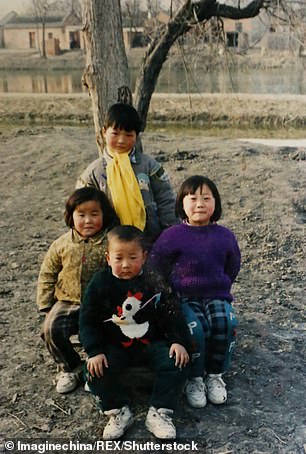 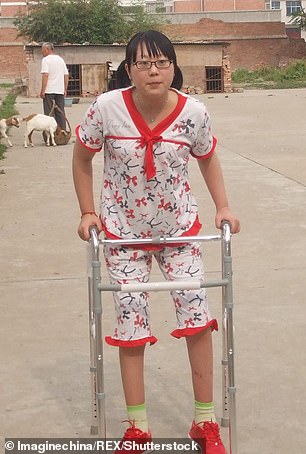 Jiafeng brought Xiaoyu to seek medical advice in larger cities so she could learn to walk again. Xiaoyu is seen in a childhood picture on the left (in purple) and practising walking on the right

But Jiafeng refused resolutely. He said he had chosen to be with Xiaoyu, therefore he would not give up so easily.

He gained the permission to accompany Xiaoyu after kneeling in front of Xiaoyu’s mother to show his sincerity and determination.

Jiafeng told Chinese media: ‘When I was accompanying her, I had faith that she would come to one day in the future.’

Jiafeng quit his job to be a full-time carer for Xiaoyu. He gave her a full-body massage every day and fed her liquid food using a large syringe. 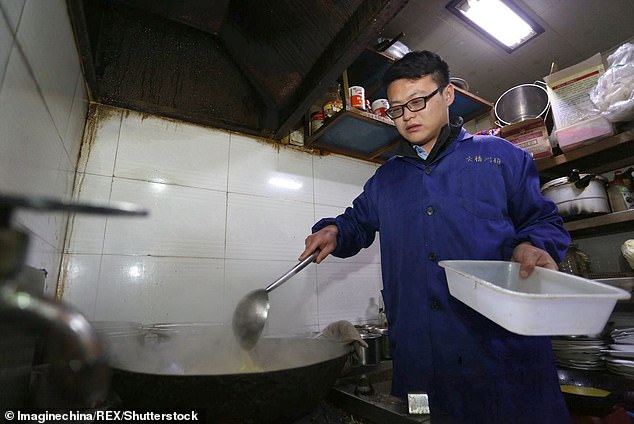 Jiafeng hopes to run his business better in 2019 in order to take good care of his wife. Jiafeng opened a restaurant in their hometown after they got married, so he could have steady income 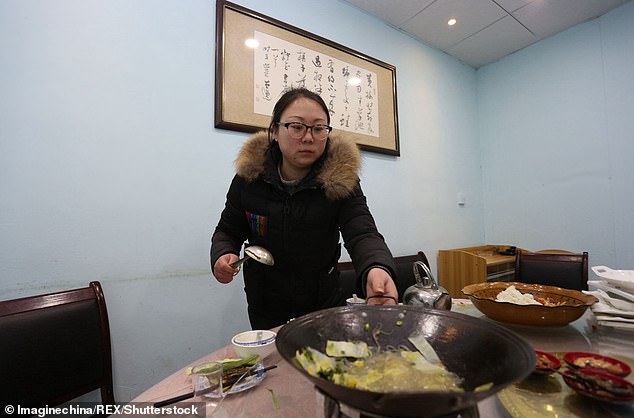 Xiaoyu, who is still recovering, also helps out in the restaurant as much as she can

Day in day out, Jiafeng stayed by Xiaoyu’s side without a single complaint. The man said one day two years later, Xiaoyu suddenly looked like she wanted to talk.

‘Afterwards, she called my name. I felt so relieved – like the sun had come out after a storm and a heavy stone had dropped from my chest,’ Jiafeng explained.

After Xiaoyu gained consciousness, Jiafeng and her family members brought her to seek medical advice in larger cities, including Beijing and Shanghai, so she could recover and walk again.

The couple got engaged in 2011 and married in 2012. Jiafeng opened a restaurant in their hometown, so he could have steady income while caring for his wife as much as possible. 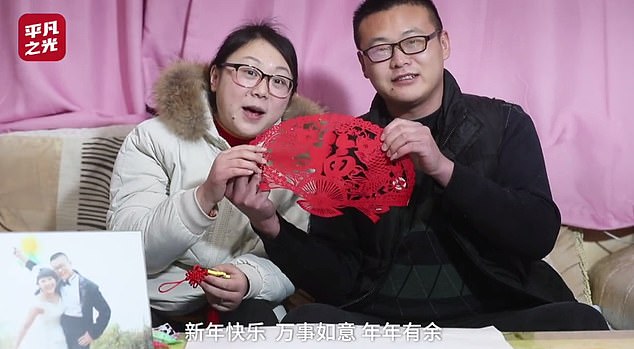 In a latest interview this month, the couple wished readers a happy Chinese New Year

She could not walk farther than 10 metres and needs medication daily. Jiafeng is still by her side whenever she needs.

In a latest interview this month, the loving husband told : ‘In 2019, I wish to work better and harder.

‘I wish to look after my business in order to take better care of her. ‘

Jiafeng said Xiaoyu would still need an operation on her arm, and he would try his best to earn money to afford that.

The couple’s biggest wish is to be able to have a baby one day.