has denied sending ‘mercenaries’ to Venezuela as the country’s Moscow-backed President Nicolas Maduro battles to hold on to power.

The Kremlin has faced claims that up to 400 private military contractors had travelled to South America to shore up Maduro’s weakening grip on the country.

But Russia’s government, which backs Maduro and has previously supplied tanks to Venezuela, today denied the claims. 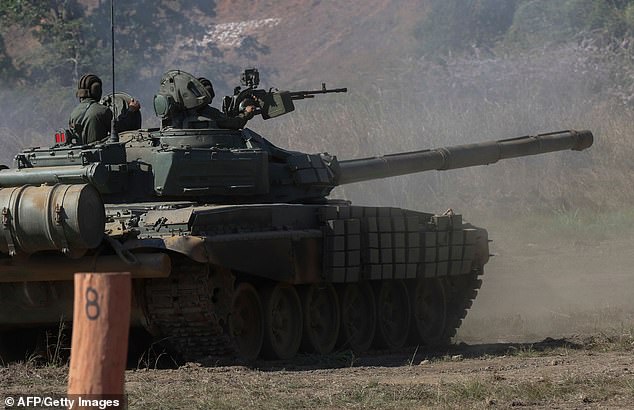 A Russian-made T72 tank takes part in military exercises at Fort Paramacay in Venezuela today. The Kremlin has denied claims that 400 ‘mercenaries’ have been sent to the country 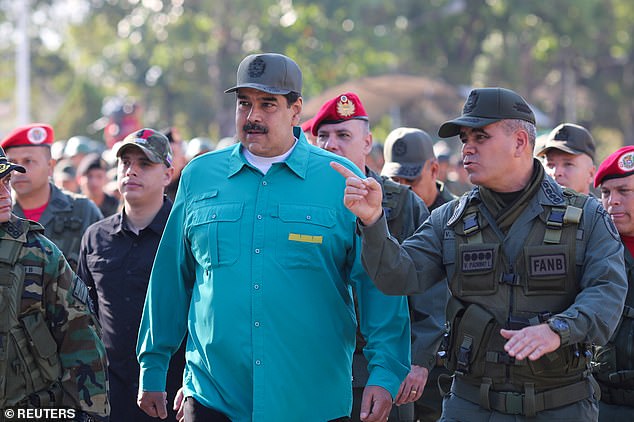 Venezuela’s President Nicolas Maduro, centre, speaks to the country’s defence minister during a military exercise today as he battles to hold on to power

Washington has recognised Guaido’s claim to power and Europe has threatened to follow suit if Maduro does not call fresh elections.

But Russia, along with China, Iran and Turkey, has backed Maduro against what they regard as a coup attempt.

The Russian ambassador to Caracas also dismissed reports of Russian mercenaries in Venezuela.

The group had ‘urgently’ got together ‘400 people’ to send to Caracas via Cuba to assist Maduro, he claimed.

Asked whether Russian mercenaries were in Venezuela, Kremlin spokesman Dmitry Peskov responded: ‘No of course not.’ 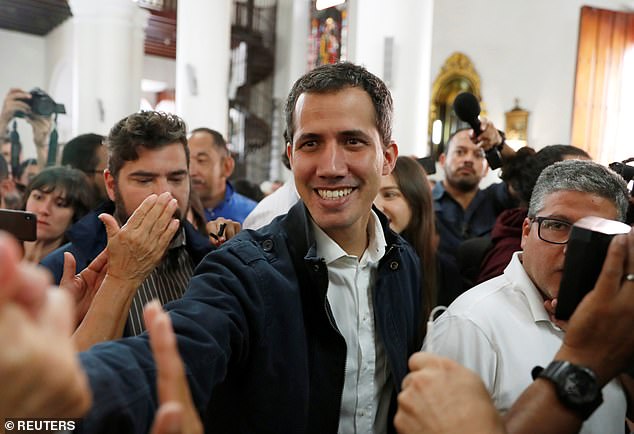 Today Maduro appeared at a military exercise in the state of Carabobo where he called for ‘union, discipline and cohesion’ to defeat what he called an ‘attempted coup d’etat.’

Rejecting the call for new elections, Maduro said: ‘Venezuela is not tied to Europe. This is complete insolence.’

The military has so far remained largely loyal to Maduro but opposition leader Guaido has tried to persuade them to switch sides.

Earlier Venezuela’s military attache to Washington Jose Luis Silva broke ranks with Maduro and urged his ‘brothers in the military’ to bcak Guaido.

The crisis has erupted after Maduro was sworn in for a second term following a disputed election victory last year.

Pope Francis, winding up a trip to Panama, said Sunday he was praying that ‘a just and peaceful solution is reached to overcome the crisis, respecting human rights.’