undergoes a dramatic transformation in order play a very bad cop in her new film, Destroyer.

But the Oscar-winning Hollywood star was back to her red carpet best when she donned an elegant white pantsuit for the film’s Sydney premiere on Monday. 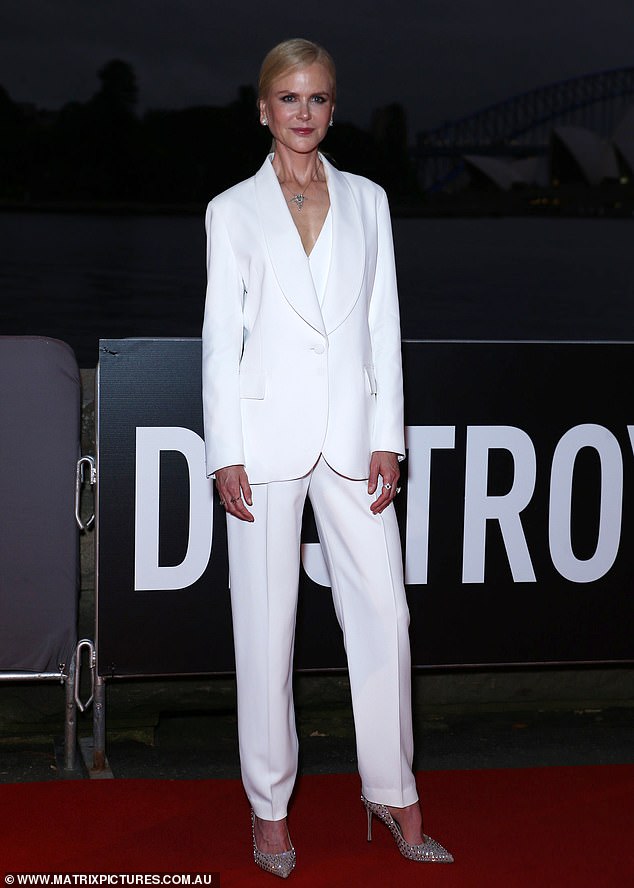 ‘They’re not seeing this film right now’: Oscar winner Nicole Kidman, 51, reveals her children won’t be watching her new flick as she dazzles at the premiere of her new film Destroyer

Look sharp in a suit like Nicole wearing Ermanno Scervino

Shop the designer at Farfetch

If there is one staple piece to have in your wardrobe, it’s got to be a suit. One only suitable for the boardroom, the two-piece ensemble has become a must-have for events or everyday looks.

And if you’re in need of some inspiration on how to effortlessly pull one off then check out Nicole Kidman, who we spotted in this Ermanno Scervino look.

Hot off the SS19 runway, the single-breasted blazer and tapered trousers make a refreshing change from a little black dress or metallic number, and we’re a fan here at Fashion Finder.

With the help of stylist Julia von Boehm, who completed the look with Sergio Rossie shoes, Nicole has mastered the androgynous look and you can too by shopping the edit below. Replicate Nicole with sets by Damsel in a Dress, Zara or Rut&Circle for as little as £60.

The actress was a picture of grace in the outfit, which she paired with an ornate drop necklace, matching earring and and assortment of rings.

Nicole completed her upscale ensemble with a pair of metal embellished pointed heels, which added a touch of edge for the siren of cinema.

The starlet opted for a glossy make-up look, choosing a dewy foundation, rouge lipstick, and dark eye make-up for the event. 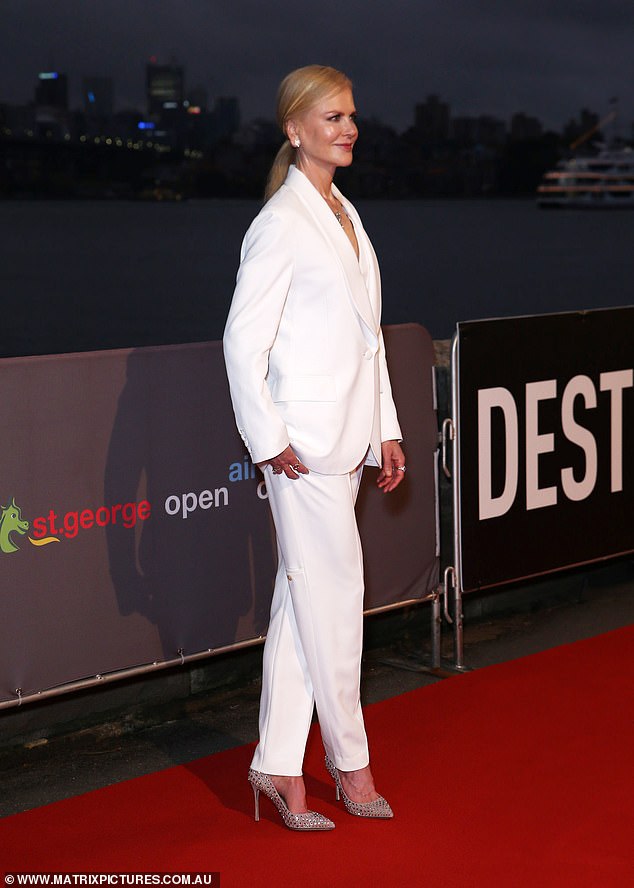 Statuesque: Nicole looked simply stunning as she posed on the red carpet in the glamorous white pantsuit, which she matched with metal embellished pumps 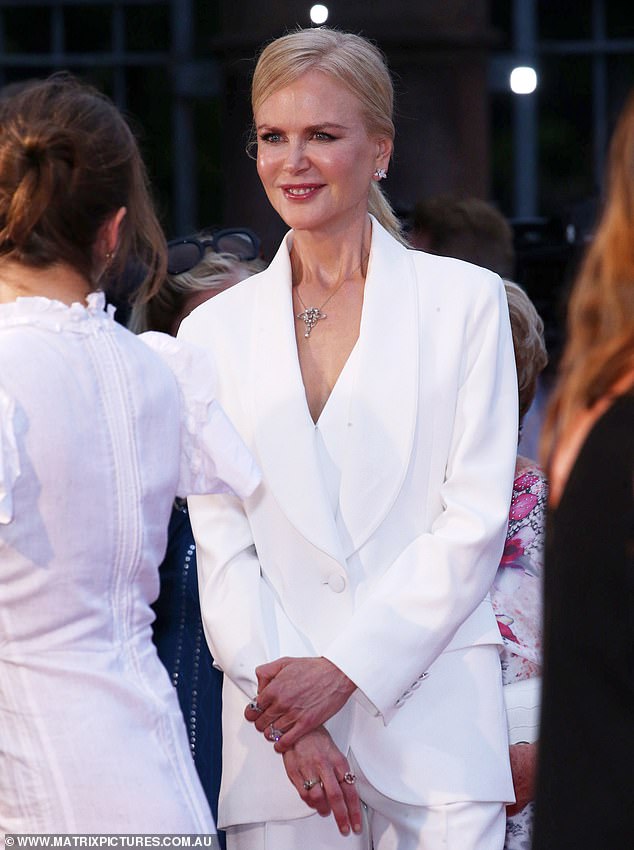 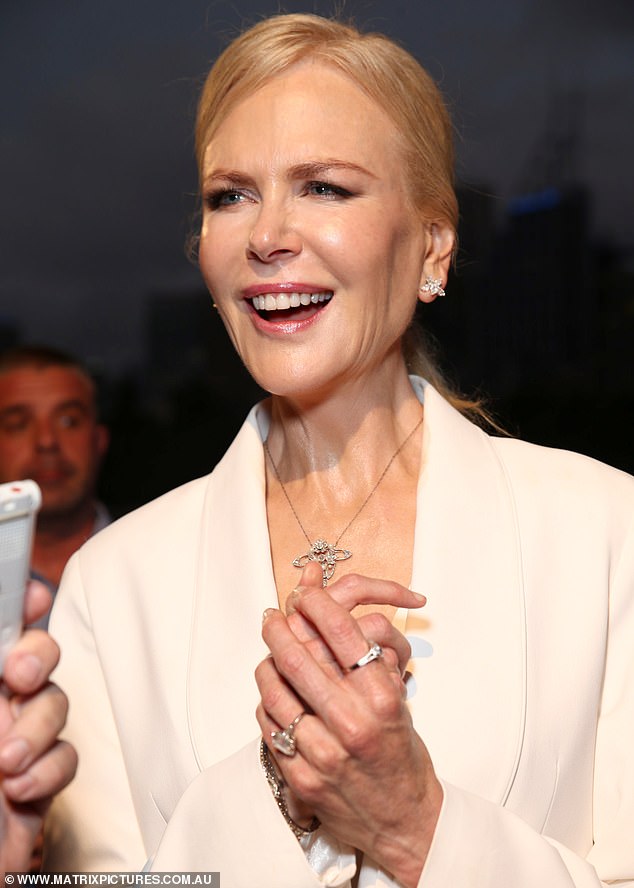 High glam: Nicole opted to wear a glossy style make-up for the event

The star wore her signature strawberry blonde tresses tied back in a classic low ponytail, which complimented the pantsuit perfectly.

Speaking on the red carpet at the premiere, Nicole told Daily Mail Australia that her two youngest children, Faith Margaret, 8, and Sunday Rose, 10, who she shares with husband Keith Urban, would not see her latest racy thriller.

‘They’re not seeing this film right now because it’s an R-rated film, they don’t see anything R rated’ she said. 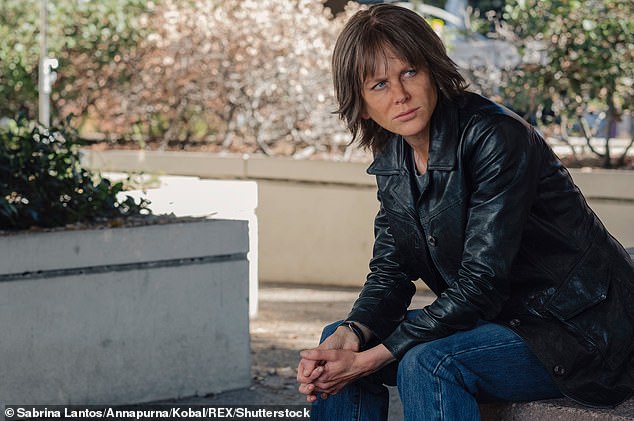 Edgy: ‘They’re not seeing this film right now because it’s an R-rated film, they don’t see anything R rated’ Nicole said of her youngest children. Pictured here in Destroyer 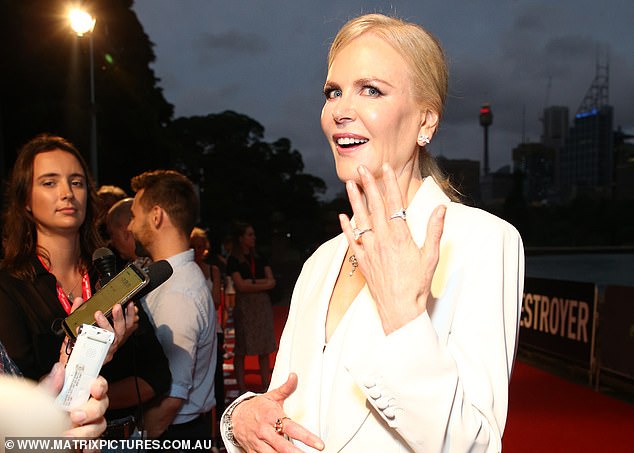 Nicole went on to gush over the Jason Momoa blockbuster Aquaman: ‘They see the PG, they saw Aquaman and they loved it,’ she said of her young daughters

Nicole went on to gush over the Jason Momoa blockbuster Aquaman: ‘They see the PG, they saw Aquaman and they loved it.’

Nicole portraying Erin Bell in her new film, an anti-heroine who is still haunted by a sting operation which went horribly wrong.

She is forced to face her past after the ringleader suddenly re-emerges and  embarks on a mission to bring him to justice. 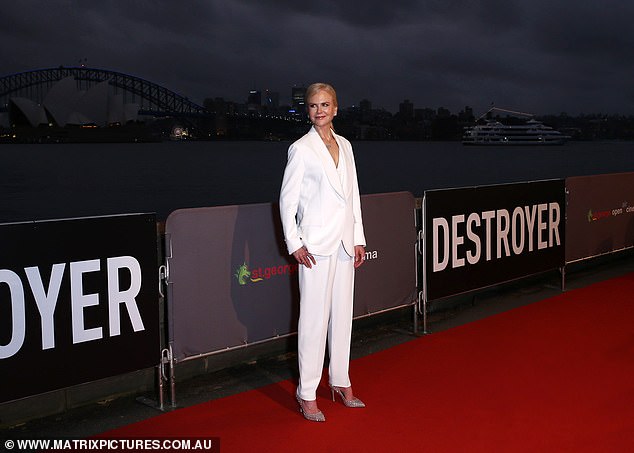 Stunning: Nicole was only too happy to pose up a storm on the red carpet in her native Sydney

Nicole summed up her character saying: ‘She has an enormous amount of self-loathing, and wherever she goes she’s carrying with her shame and stress.

She added: ‘Erin is a great cop but she’s not functioning, so instead of talking to cops for research I watched footage of wild coyotes.’

The film star has been making the most of her time Down Under, enjoying the Australian Open with her country superstar husband Keith this week. 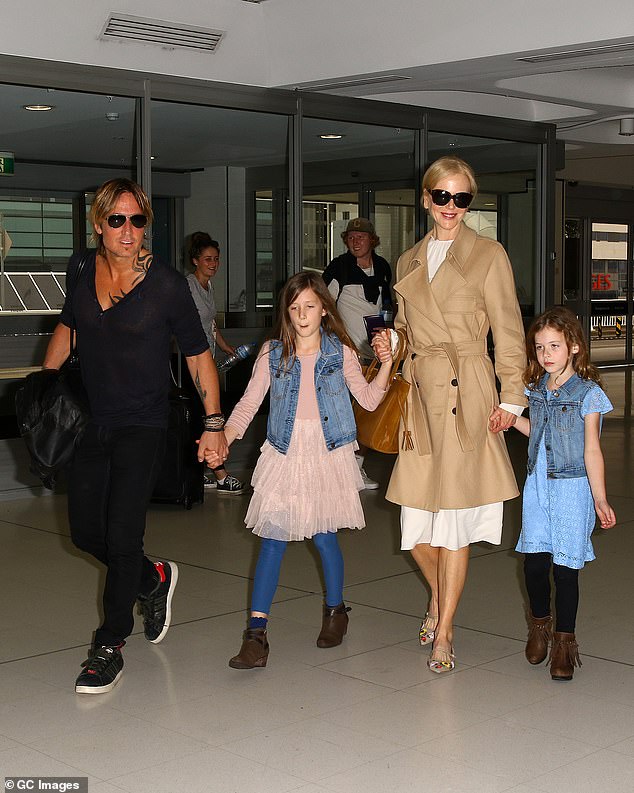 Vicky Pattison radiates beauty as she steps out after leaving fans in tears with her break-up show
Carson Daly stepping down from Last Call after 17 years to spend more time with his family
Gordon Ramsay's pregnant wife Tana, 44, reveals her growing baby bump in tight black t-shirt
Khloe Kardashian gets sassy with commenter who says photoshopped snap with True doesn't 'make sense'
Ola Jordan looks chic in a black blazer dress as she and husband James Jordan enjoy a date night
Kelly Osbourne joins boyfriend Jimmy Q for the All Point East festival in East London
Kim and Kourtney Kardashian spare no expense for North and Penelope's Candyland-themed birthday
Dakota Johnson cuts a casual figure in plaid trousers and T-shirt while stepping out in Santa Monica