A hunt has been launched for a red panda which went missing from a zoo in Belfast.

Police in said the animal had gone missing on Sunday and was believed to be in Glengormley.

The public has been urged to keep clear of the panda as it ‘may be defensive when cornered’.

Police said in a statement: ‘Earlier today a red panda decided to take a surprise vacation from Belfast zoo, it is believed to be currently taking  the sights of beautiful Glengormley. 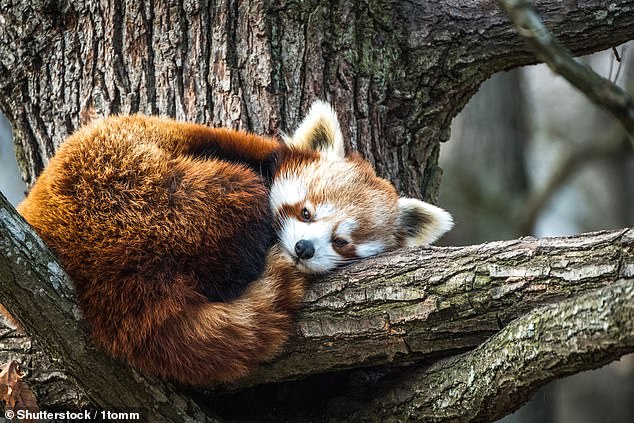 ‘Should you see this panda, please ring us on 101, the PSNI along with help from our friends at the zoo will help transport the explorer home. These animals are nocturnal and would generally be located within wooded areas.

‘Please do not approach or attempt to capture this animal, although they are not aggressive by nature they may be defensive when cornered.

‘Our curious friend has not yet learned the green cross code, so if motorist’s could also be vigilant! Especially within the Glengormley area.’

It is not the first time a red panda has escaped from Belfast Zoo, after one of the animals disappeared from an enclosure in 2002.

According to zookeepers the red pandas are also known as ‘lesser’ pandas or ‘firefoxes’.

It was originally thought that this species was related to the raccoon family or even the other bamboo eater, the giant panda, but they have since been classified as a unique species in their own family, the zoo said.

The mammals spend most of their time in the trees, with sharp claws which make them agile climbers, according to zoo chiefs.

100 years ago, US fought its deadliest battle in France
Is the iPhone XR in trouble? Analyst cuts shipments of Apple's 'budget' $749 phone by 30m units
Hubble capture 655 MILLION pixel image of a nearby galaxy showing its 40 billion stars
Spending Review 2019: What will be in the pre-Brexit giveaway?
More than 1,000 schoolchildren caught with weapons including knives and knuckledusters
Britain's 20th coronavirus case first to contract infection on UK soil
Novelist Barbara Taylor Bradford is told to change the name of her latest work 'Blackie and Emma'
UK's patient zero 'is Sussex IT worker, 50, who caught coronavirus in Austrian ski resort party bar