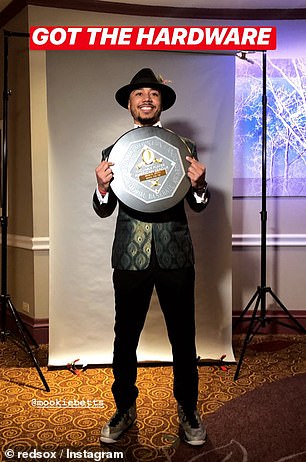 American League MVP Mookie Betts won’t be with the Boston Red Sox when they visit the White House as World Series champions.

According to a report Saturday by Pete Abraham in the , the 26-year-old Betts will skip the visit, which is scheduled for May 9.

The player did not elaborate any further or mention if his refusal had to do with President Trump.

Betts was in  to accept his Most Valuable Player award at the 96th annual Baseball Writers’ Association of America dinner Saturday night.

The star player has rarely spoken publicly about politics or social issues. In an interview last year, Betts expressed his own need to educate himself about topics and be nuanced with his views.

‘Some of it is still learning. I haven’t really gotten [into] a lot of issues that are going on, social issues and all those type of things. So yeah, I still learn about it. And some of it is just, pick your battles,’ he said according to .

In 2016, Betts made a comment about former NFL player Colin Kaepernick’s kneeling protests during the national anthem, but couched it in terms of his personal connection to his father’s military service. 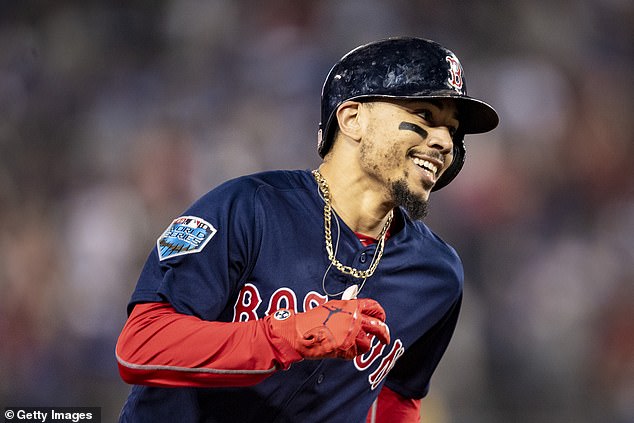 Mookie Betts, #50 for the Boston Red Sox, has been largely quiet on political and social issues 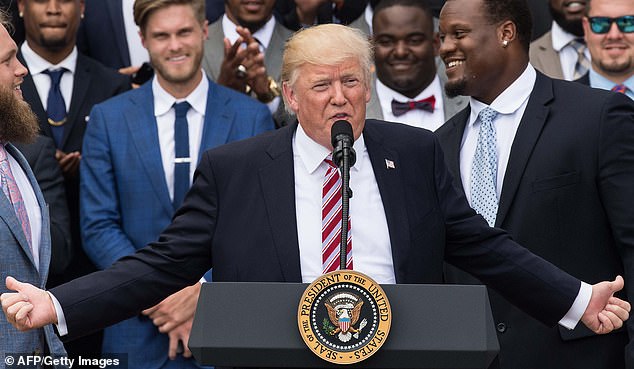 Donald Trump, seen here, has hosted a number of championship sports teams since 2017, with several high profile players in that time balking at visiting his White House

‘My dad fought for this country. We may be in a completely different spot if we don’t have those people to go out and protect us. So I’ll always make sure [to stand.]’

Still, in a little remarked upon moment, the ballplayer met with Karl Dean, the Democratic candidate running for governor in his home state of Tennessee back in 2017.

Dean, who is the former mayor of Betts’ home town of Nashville, still has the picture of him meeting the baseball superstar on his own Twitter feed.

‘It’s not every day you get to meet one of the best players in baseball,’ Dean captions the image. ‘Huge thank you to Tennessee native and Red Sox star @mookiebetts for lending his time in support of our campaign.’

The Red Sox were scheduled to visit the White House on Feb. 15 but postponed the trip because of the government shutdown. The team will now work the visit into the end of Boston’s road trip to play the Baltimore Orioles from May 6-8.

Last weekend, team president Sam Kennedy explained the club did not feel it was appropriate to attend the White House during a government shutdown which came to a temporary end last Friday.

With the next deadline over government funding slated for February 15, it is unclear what might happen to a Red Sox visit in May. 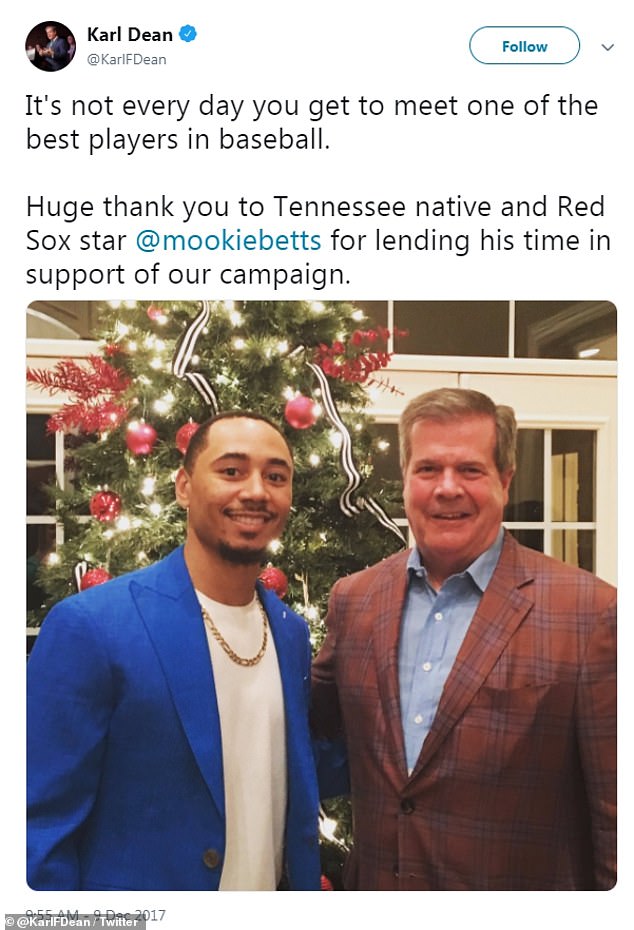 Former mayor of Nashville, Mookie Betts’ hometown, Democrat Karl Dean, posted this photo around Christmas time in 2017. Dean would go on to lose the governor’s race to Bill Lee

Cora has been critical of President Trump’s stance on Cora’s native Puerto Rico and the devastation caused by Hurricane Maria in 2017. Cora’s family was on the island when the hurricane hit.

‘There’s a few things that have come up in the last 10 days about Puerto Rico,’ Cora said. ‘It’s a topic that back home is huge. But like I said, if I go, I’ll represent Puerto Rico the right way. I don’t know what kind of platform I’m going to have if I go. It’s not that I’ve changed my mind, but we’ll see what happens in the upcoming days.’

Betts will be joining a list of very prominent athletes who have decided not to meet with President Trump after winning their sports’ top prizes. Stephen Curry and his Golden State Warriors were dis-invited after Curry hesitated to go in 2017.

Tom Brady, New England Patriots quarterback who has a friendly relationship with Trump going back years, declined to visit last year due to family issues, and Chris Long, Philadelphia Eagles defensive end, has declined to visit the Trump White House twice: once with the Patriots and the following year with the Eagles.

Clemson University’s national championship football team was the most recent group of athletes to visit Trump at the White House earlier this month.

The White House said Trump himself sprang for what he pronounced to be ‘great American food’ for the visiting Clemson Tigers during the recent partial government shutdown.

‘We have pizzas, we have 300 hamburgers, many, many french fries, all of our favorite foods,’ Trump told reporters, as one White House worker still on the job lit tapered candles.