A select group of moneyed and high-powered guests turned up at the home of Vernon Jordan on Sunday for brunch.

Among those who were spotted outside the DC townhouse were billionaire Berkshire Hathaway CEO Warren Buffett with his daughter Susie, the current United States Secretary of Commerce Wilbur Ross, 81, with his wife Hillary Geary, 68, and Colin Powell, who was seen heading home with his wife Alma after the gathering.

Alan Greenspan, the former Chair of the Federal Reserve from 1987 to 2006, was also seen exiting with his wife, NBC News Chief Foreign Affairs Correspondent Andrea Mitchell.

The 92-year-old financial adviser, who currently works in the private sector, looked frail as he walked down the stairs with a cane as Mitchell, 72, held his arm to assist. 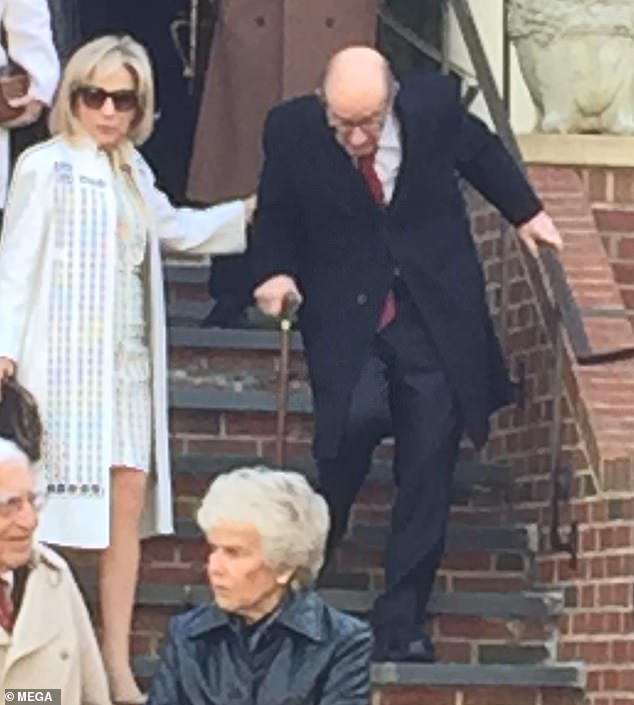 Step and repeat: Alan Greenspan looked frail as he exited a brunch at the home of Vernon Jordan on Sunday, with the former Fed Chairman being helped by wife Andrea Mitchell (Greenspan and Andrea Mitchell above on Sunday) 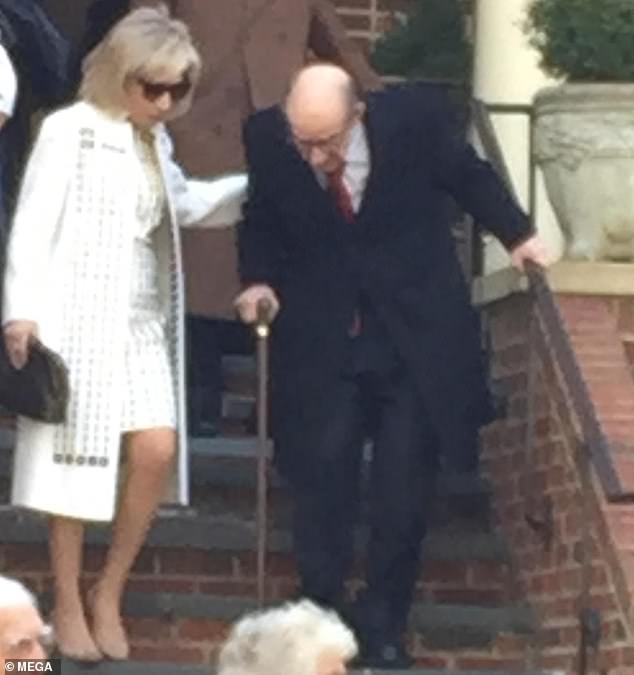 heading down: The 92-year-old (above) attended the brunch the morning after the Alfalfa dinner, joining fellow guests including billionaire Warren Buffett and his daughter Susie 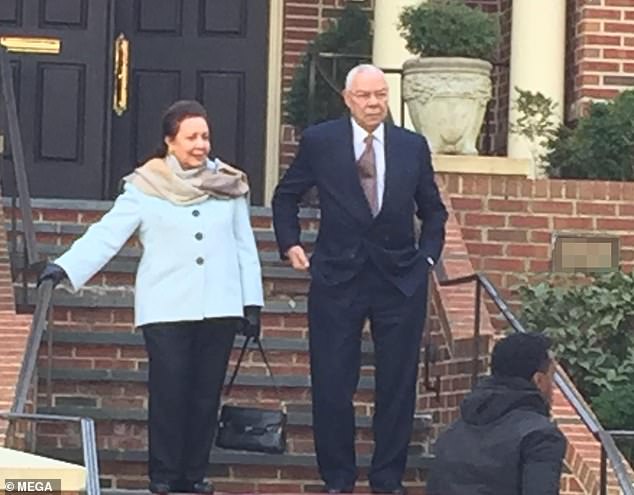 Powelling through: Colin Powell (above with wife Alma), Eric Holder and the current United States Secretary of Commerce Wilbur Ross were all spotted leaving brunch too on Sunday with their wives 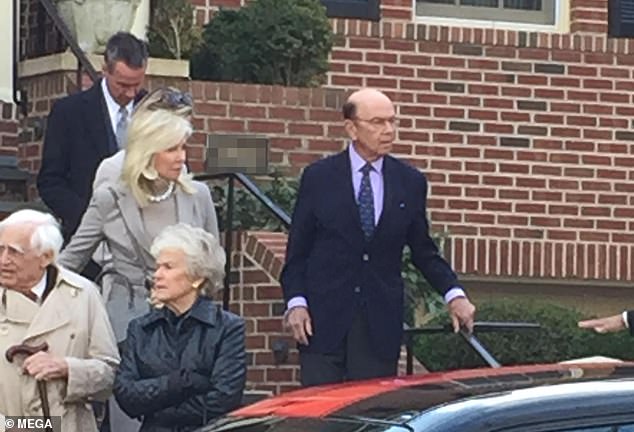 Loan shark: The current United States Secretary of Commerce Wilbur Ross and his wife Hillary Geary (above) was spotted leaving brunch too on Sunday

Jordan and his wife Ann hosted the brunch the day after the annual Alfalfa Gala.

That event drew out a long list of big-name politicians and billionaires this year, including new member Tim Cook and newly single Jeff Bezos.

President Donald Trump did not attend however, for the third year in a row.

A number of his cabinet members did however, including Transportation Secretary Elaine Chao, Treasury Secretary Steve Mnunchin and Kellyanne Conway.

Conway did not appear to get an invite to Jordan’s fete however, despite living just across the street.

Former Attorney General Eric Holder was there, and seen speaking with his wife Sharon, while financial journalist Carol Loomis was also among the guests spotted exiting Jordan’s home on Sunday.

Loomis was seen exiting at the same time as her good friend Bufett. 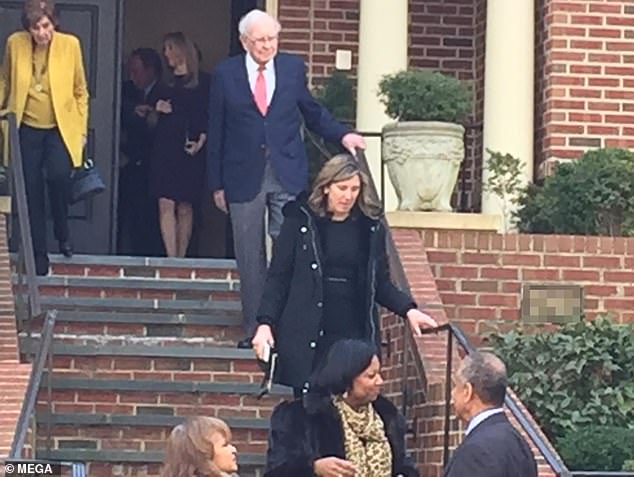 Billionaires and buddies: Warren and Susie Buffett exit down the stairs (right) while Eric Holder (bottom) holds a conversation with fellow guests 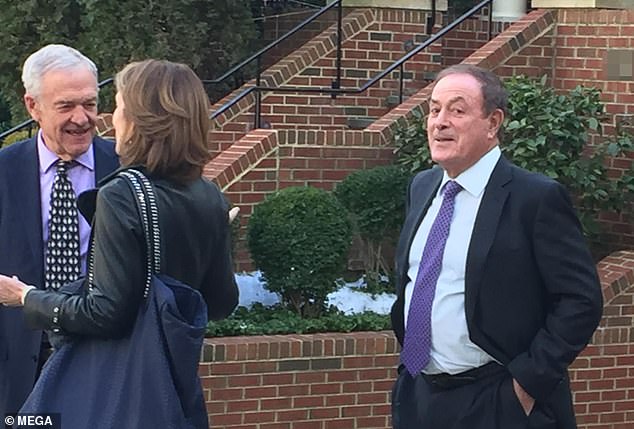 Play-by-play: Al Michaels waits for his car after the event (above) 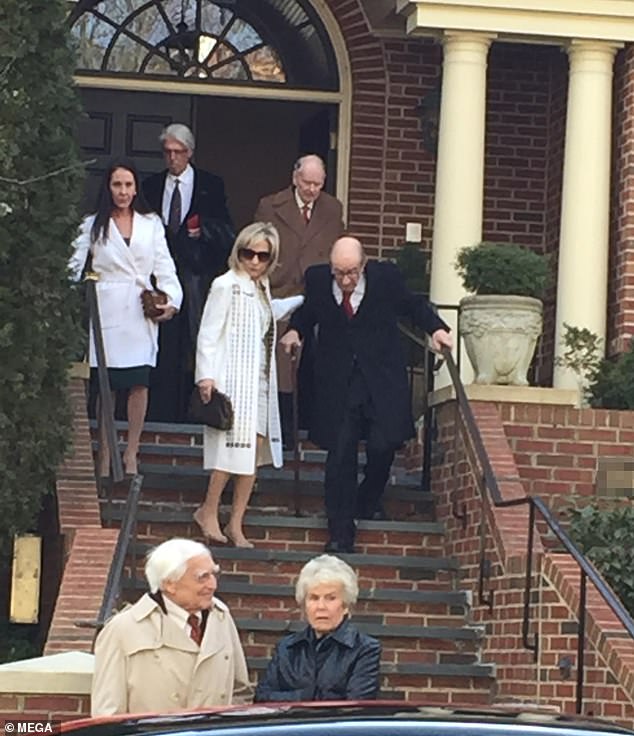 Exodus: the scene outside Jordan’s home on Sunday after the brunch festivities ended (above)

John Kerry was the speaker at this year’s Alfalfa Gala, and he did not hold back as he went after the president and the man who will succeed him as president of the group – Mitt Romney.

‘Just think, Mitt and I are two of the only people who understand the temptation to run for office in every state where you own a home,’ said Kerry.

‘Mitt’s running mate Paul Ryan went on to become Speaker of the House, my running mate John Edwards got booted out of his house.’

He also went after Donald Trump. saying: ‘Donald Trump could be the first president to go to the inaugural of his successor in a limo with license plates made by his campaign manage.’

Even Brett Kavanaugh got called out by Kerry, who said: ‘I’ve learned so much over the past year as your president: I learned that I’m at an awkward age, too old to run a marathon, too young to be in the House Democratic leadership. And I learned that at an average Alfalfa dinner, this crowd goes through 70 cases of beer, 300 bottles of wine and over 2,600 mixed drinks.

‘Or as Brett Kavanaugh calls that — a quiet weekend.’

The best dig of all however may have been directed at Ross, who just days earlier encouraged furloughed workers who needed money because of the government shutdown to take out loans.

‘I think we’ve all noticed, there’s been a lot of turnover in this administration. Secretary Zinke was fired. Reince Priebus was fired. Rex Tillerson, General McMaster, Jeff Sessions. They were all fired,’ said Kelly.

‘One thing you can say about the Trump people:  they’re not quitters. Wilbur Ross is here. I want to thank him for taking care of dessert. He went to the kitchen and said, “Let them eat cake.”‘

Stormy Daniels screamed at Superstar Huge Brother bosses earlier than storming off set
DR MICHAEL MOSLEY: Diet pills may sound great, but are they a magic bullet?
Fox News host Tucker Carlson responds to Antifa at his home, former colleague Megyn Kelly weighs in
Samantha Markle hits back at 'fake news' that Meghan had a guard to protect her
Larry Kudlow says Trump and Xi are expected to sign new trade deal THIS MONTH at Mar-a-Lago
Car crashes into lobby of Trump Plaza in New York
Rapper ASAP Rocky shows off fun manicures as he urges more men to embrace nail art
Moment a painter, 46, plummeted 30ft to the ground after a passing pensioner shook his ladder