Yvette Cooper today warned that the game of ‘chicken’ over Brexit must end – as ministers pleaded with Remainer MPs not to kill off no deal in crunch votes this week.

The Labour MP urged politicians to back her bid to delay the UK’s departure date in a Commons showdown on Tuesday and avert the threat of crashing out.

But the PM’s effective deputy David Lidington begged the House to hold off inflicting another stinging blow on the government’s strategy, saying they would have more chances in the coming weeks.

Meanwhile, Education Secretary Damian Hinds suggested keeping no deal as a ‘possibility’ was crucial to have leverage with the EU in frantic negotiations.

The appeal for more time came as tensions escalated dramatically over how to resolve the deepening political crisis over Brexit.

Mrs May is facing another gruelling week as she tries to keep her Cabinet together and fend off the bid by cross-party Remainers to force her to extend the Article 50 process. 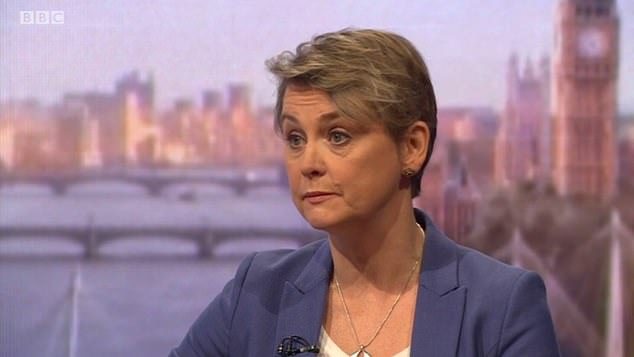 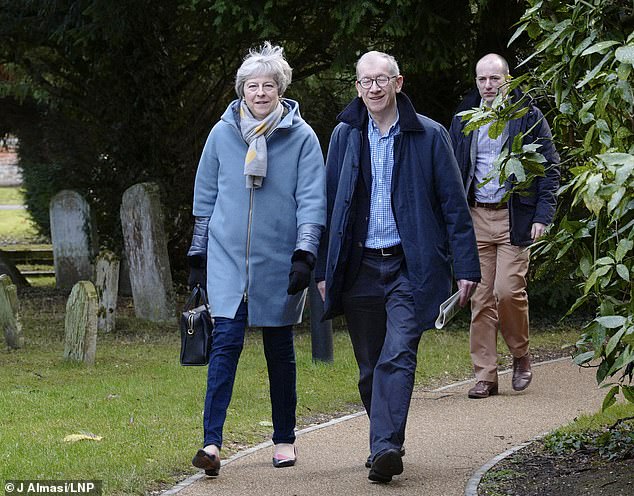 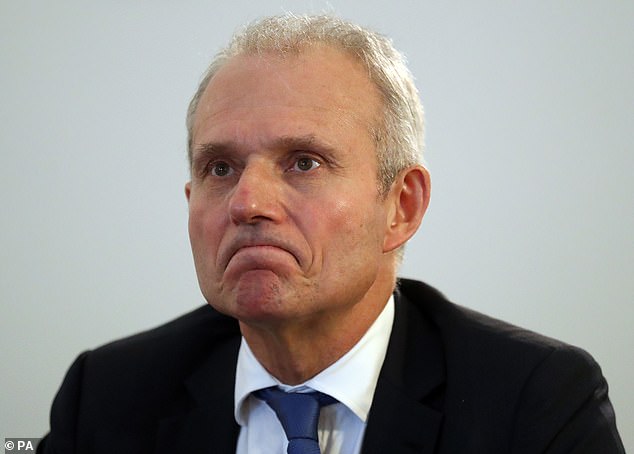 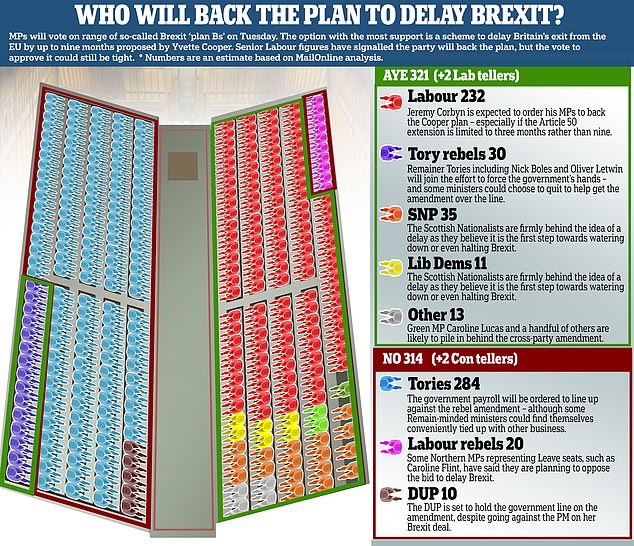 If the plan, pushed by Ms Cooper, is passed by MPs on Tuesday it would pave the way for law ordering a nine-month extension to be considered on February 5.

Amendments are also tabled intended to rule out a no-deal Brexit, and stage a series of ‘indicative’ votes to work out what approach would gain a majority in the Commons.

The government seems to be pinning its hope on changes tabled by senior Tories that would demand a rewriting of the controversial Irish border backstop – something she could take to Brussels as concrete evidence of the will of MPs.

Ministers are increasingly hopeful that there could be movement as splits emerge between Dublin and EU leaders over whether there would need to be a hard border if the UK crashes out.

However, a rattled-looking Irish deputy PM Simon Coveney today warned that it will not help if the Commons votes to make demands that will be rejected by the EU.

‘The European Parliament will not ratify a Withdrawal Agreement that does not have a backstop,’ he told the BBC’s Andrew Marr show.

Mrs May must control rising unrest in her own ranks, after Amber Rudd hinted she could quit to support the Cooper amendment on Tuesday.

Chancellor Philip Hammond also refused last week to rule out resigning if the government’s stated policy becomes no deal Brexit – although he tried to play down the idea that the latest votes are ‘high noon’, saying there was still time to find a solution.

Speaking on the BBC’s Andrew Marr Show, Ms Cooper denied she was trying to ‘block Brexit’ with her amendment.

The former Treasury minister said she was not yet sure if she had the backing of Labour leader Jeremy Corbyn, nor of some of the Tory frontbench. On Mr Corbyn she said: ‘I hope he will support it – he obviously needs to make a decision in the normal way.

Whitehall officials have been ‘war-gaming’ imposing martial law to avoid chaos on the streets after a no-deal , it was claimed today.

The extreme measures are being considered as part of a major response if the UK crashes out of the EU at the end of March.

Mandarins have been discussing whether to use wide-ranging powers in the Civil Contingencies Act 2004 – which include curfews, travel bans and deploying the army, according to the Sunday Times.

Robert MacFarlane, the deputy director of the Civil Contingencies Secretariat, has been involved in preparations for no-deal Brexit.

The possibility of using the Civil Contingencies Act for Operation Yellowhammer – the no-deal Brexit plan – was apparently raised for the first time last week.

‘As no-deal preparations are accelerated and training is rolled out to civil servants, questions have been raised about the legislation and how it could be used in the event of a no-deal Brexit,’ a source told the Sunday Times.

‘The PM has said that there will be disruption in the event of no deal, but as a responsible Government we are taking the appropriate steps to minimise this disruption and ensure the country is prepared.’

‘I suppose what I would say to him, to the Prime Minister, to the Government ministers who I think also want to make sure that we don’t have no deal is in the end we can’t… keep waiting for other people to sort this out.

‘We can’t carry on with a kind of game of chicken… That’s not a way to make sensible decisions.

‘In the end someone has to take some responsibility and say: ‘if the Prime Minister runs out of time she may need some more time’ – that is not about blocking Brexit, that is about being responsible and making sure you can get a Brexit deal.’

Cabinet Office minister Mr Lidington urged Remainer MPs to hold their fire, saying there would be other opportunities to avoid no deal.

‘If Parliament wishes to avoid no deal, I have no doubt it will find ways to express a view in the coming weeks,’ he wrote in the Observer.

‘But next week’s debate is not a re-run of the meaningful vote, nor is it the final decision point for MPs.

‘So we must keep our focus on the only real way to rule out no deal – and that is to find common ground on a deal.’

Mr Hinds made clear no deal was not his favoured outcome, but warned that ‘prolonging’ the Article 50 period would not help resolve the crisis.

‘I don’t envisage no deal becoming Government policy. We want to avoid a no deal. No deal would not be a good outcome,’ he told Sky News’ Sophy Ridge On Sunday.

‘But, it is important that it remains as a possibility because, on the other hand… some people are trying to thwart Brexit altogether.’

Health Secretary Matthew Hancock also said he ’emphatically’ did not want no deal, but argued that delay would not help.

He also suggested that despite the ‘negotiating position’ being taken by the Irish government it was clear they were alarmed at the prospect of no deal.

‘The whole purpose of the backstop is to avoid a hard border, which risks being a consequence of a no-deal Brexit,’ mr Hancock said.

‘The idea the EU and the Irish Government would drive this process to a no-deal exit in order to try to achieve something which is intended to avoid no-deal Brexit, that is not going to happen.’

Junior minister Stephen Hammond, who declared himself a ‘proud’ Remainer, hinted that he might not jump ship to back the Cooper plan.

He told the BBC he was hoping Mrs May would give ‘some definition to when she intends to hold the meaningful vote’.

However, defence minister Tobias Ellwood today openly contradicted the PM by warning it is ‘time to rule out the very possibility of no deal’.

‘It is wrong for government and business to invest any more time and money in a no-deal outcome which will make us poorer, weaker and smaller in the eyes of the world,’ he wrote in the Sunday Times. 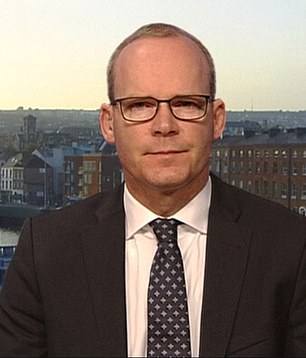 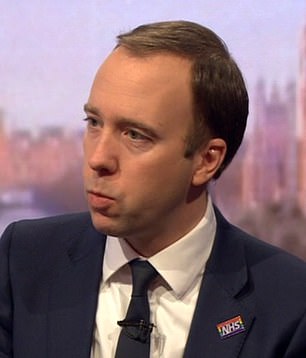 Irish deputy PM Simon Coveney (left) today warned that it will not help if the Commons votes to make demands that will be rejected by the EU. Health Secretary Matthew Hancock (right) said he ’emphatically’ did not want no deal, but argued that delay would not change the fundamentals in the Parliamentary standoff

What is Tuesday’s Plan B vote and what will it mean?

Because Theresa May’s Brexit deal was defeated, the law says she must tell Parliament what her Plan B is.

This has to be done in a motion to the Commons, which will be voted on by MPs next Tuesday night.

That motion can be re-written by MPs if they table amendments and win a vote in favour of them.

Some amendments have already been tabled and MPs can keep producing them until Monday night.

What does May’s plan say?

It promises more cross-party working, renews commitments to protecting workers’ rights after Brexit and says the PM will ask Brussels for more concessions on the backstop.

It it based on the current deal that was crushed by 230 votes last week.

What do the main amendments say?

Jeremy Corbyn’s amendment says Parliament should vote on ‘options’ including a renegotiation of the deal to get a permanent customs union and for a second referendum.

A cross party amendment from Yvette Cooper and Nicky Morgan seeks to block no deal by giving time to a draft law that would require the Government to delay Brexit if a deal has not been agreed by February 26. It upturns normal convention by putting a backbench MP’s Bill ahead of Government plans.

An amendment from Tory rebel Dominic Grieve seeks to set up weekly debates that would mean regular votes on what to do in the absence a deal. His amendments sets aside six named days for the debates – including as late as March 26.

The Government also appears to be encouraging MPs to back an amendment from Tory MP Andrew Murrison that would effectively set a time limit on the backstop of December 31, 2021.

Some ministers hope that if the Murrison amendment is passed it will pile pressure on the EU to concede an expiry date on the backstop – which Brexiteers fear the UK will be stuck in forever, and the DUP believes risks splitting the union.

Another amendments tabled by Sir Graham Brady, chair of the powerful 1922 committee, would effectively eradicate the backstop and demand the EU and UK find other solutions.

What would the vote do?

Legally nothing – but if the Commons votes in favour of a clear way forward by a majority it will be a major political signal of what might happen.

Is it a new ‘meaningful vote’ that can approve May’s deal?

No. At some point, the PM will have to stage a repeat of last week’s vote to get explicit approval from MPs to go ahead with her deal if she wants it to survive.

Man punched by Ben Stokes insists he was sufferer of...
Consumers evacuated as blaze guts landmark Belfast constructing
Under-fire US gymnastics coach hits back at criticism
Corbyn orders Labour MPs not to talk to May about solving Brexit
Disgraced Labour MP Kate Osamor begs judge to keep her 'beautiful son' out of jail
Pictured: The boy, nine, who was mauled to death by a 'bulldog' in Cornish caravan park
Less enthusiastic social media users react to first glimpse of Archie
Thousands of tourists are unable to get money back for trips cancelled due to Covid