It seems that Mika Brzezinski and Joe Scarborough are still very much enjoying wedded bliss, as the pair has not taped their MSNBC show in New York since getting married last year.

The newlyweds have instead opted to film Morning Joe from their home, according to Washington Post reporter to Paul Fahri.

Scarborough and his bride are doing their best to make it seem as though they are taping in different studios in Washington DC, with the help of few green screens. 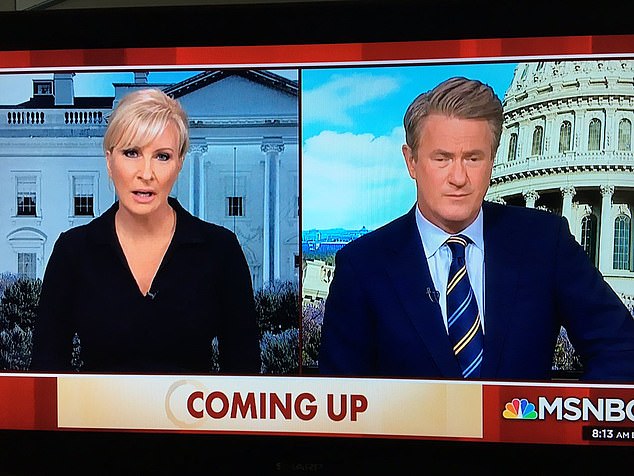 Scarborough and his blushing bride are doing their best to make it seem as though they are taping in different studios in the nation’s capital, with Mika at the White House and Joe in front of a photo of the Capitol

‘So how come Joe and Mika never appear in the same camera shot? Two reasons: They’re broadcasting from a home studio in Jupiter,’ said Fahri.

‘And there’s no formal set in their home studio, just a couple of (Washington) backdrops.’

Fahri then pointed out that this is not the most natural set-up for the hosts.

‘What you don’t see in these shots: Joe and Mika are actually sitting a few feet away from each other. But they each address their own camera rather than turning to speak to each other (because doing that would expose the fact that they’re sitting on a makeshift set),’ noted Fahri.

‘Awkward? Well, yes. People on the show say the multistate production arrangement has caused some concern about its affect on the “chemistry” of the panelists and the co-hosts. They say having everyone on set at the same time creates a smoother show (and is easier to produce).’ 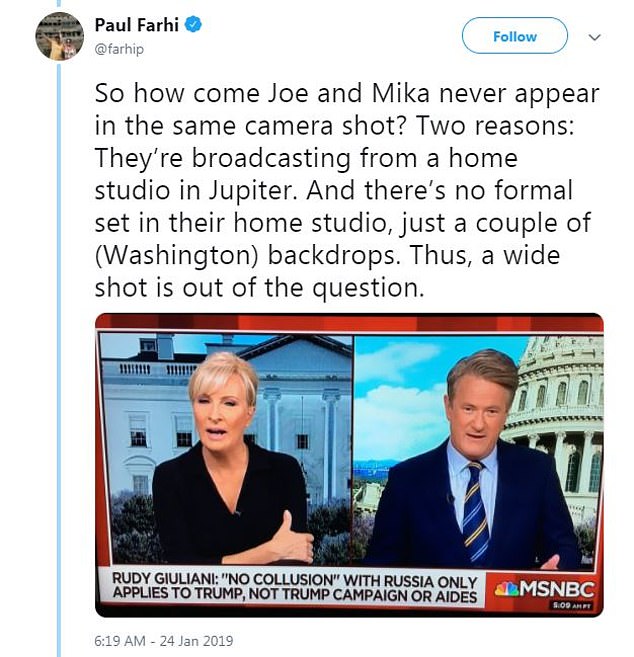 The newlyweds have instead opted to film Morning Joe from their Florida home, according to Washington Post reporter to Paul Fahri

The move has not seemed to hurt the program in the ratings, where it has posted increases over the past year while its competitors lost viewers.

Fox & Friends still dominates the time slot on Fox News, but Morning Joe has moved well past New Day on CNN in both total viewers and the key demo.

There was also a different set-up this week after Scarborough was forced to miss the show due to an unknown illness.

Brzezisnki hosted alone Monday through Thursday, and on Friday she too was not on the program.

‘Joe is out and hopefully he’ll be back next week and Mika is out with family matter,’ said Willie Geist at the top of the show.

YouTube make-up guru's sponsors flee after resurfacing of racist and fat-shaming tweets from 2012-13
Parents of Chris Watts tell judge they have been denied access to their son
Former Scientologist, 27, tells how stranger she met on Reddit helped her escape
Alec Baldwin's wife Hilaria shares photo of herself with her four kids after miscarriage
People with disabilities reveal their sassiest comebacks to the stupid questions people ask
How Michael Cohen's plea for attention from Trump was snubbed by the president
Transgender model Andreja Pejic discusses her struggles to gain acceptance in the fashion industry
Three assisted living facility workers 'videotaped, encouraged elderly dementia patients to fight'