Trump confidant Roger Stone has been arrested in as part of the Russian election meddling probe.

Stone was arrested on five counts of making false statements, one count of witness tampering and one count of obstruction of an official proceeding.

He is due to appear at the federal courthouse in Fort Lauderdale on Friday, according to a press release from Mueller’s office. 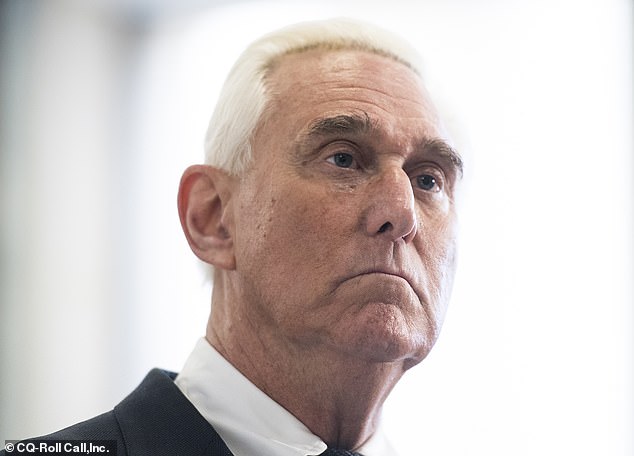 Roger Stone, a close confidant of Donald Trump, was arrested Friday morning in Fort Lauderdale on seven charges including witness tampering as part of the Russia probe

The former Nixon campaign adviser has long been portrayed as a central figure in the election interference scandal, but as recently as January 4 told Dailymail.com that he doesn’t expect to be indicted.

‘They got nothing,’ he said of the special counsel’s investigation.

‘They’ve tried hard, but I didn’t do anything illegal. That’s why I’m not worried and I’ll do a public appearance like tonight’s without a problem.’

As part of various investigations into Russian election meddling, he testified before the U.S. House of Representatives Intelligence Committee for four and half hours in September 2017.

He recently refused to testify before the U.S. Senate’s Judiciary Committee.

Stone has accused Mueller of harassment after the counsel’s sleuths tracked down and interviewed 19 of his friends and business associates.

‘My cleaning lady had to go back to Cuba for a while, so I hired a temp,’ Stone said.

‘The temp spoke only Spanish. I never knew her name or anything. Yet, government agents found her in Miami. They asked her if I was meeting with Russians at home.

‘Now, how they found her when I didn’t even know her name, I can only guess. I know she had nothing to say to them.’

He claims agents showed some of Stone’s friends a photo of the two-year-old boy born to Kristin Davis, the infamous Manhattan Madam whose prostitution service was used by disgraced former New York Governor Eliot Spitzer and, allegedly, the likes of retired baseball slugger Alex Rodriguez.

‘They kept asking if the baby was mine,’ the married Stone said. ‘What does that have to do with Russian collusion? The baby is not mine, I’m the godfather. But that’s an invasion of privacy if I’ve ever seen one.’

Being at the forefront of this political scandal has been ‘financially debilitating, to say the least,’ he says.

Trump says Democrats using `con game´ to sink Kavanaugh court bid
George H.W. Bush's casket arrives at St. Martin's Episcopal Church in Houston
Elizabeth Warren makes a surprise appearance at Native American luncheon
We'll drink to that! The Clooneys see their fortune grow to £270m
Renter, 48, is charged with battery after he put his elderly landlord in a headlock
Man dies jumping off tenth floor balcony of an Atlanta hotel after 'exposing himself' to housekeeper
Batlow roads lined with thousands of dead animals
Bodies of missing couple in their 20s who disappeared while hiking in California are found