A woman has shared a video from an unwelcome admirer who sent her a photo montage featuring her own selfies and a snap of him in a Cookie Monster costume.

The male calls Emma Miller his ‘cutest princess’ as computer-generated petals cascade down the screen to a backing track of Patrick Swayze’s ‘She’s Like The Wind’.

The young woman, from Kilwinning, North Ayrshire, tweeted the tribute, writing: ‘Av had many admirers but never had anything like this sent tae me.’

The video has now been viewed nearly 300,000 times and has attracted hundreds of comments from those who found it hilarious, with one person suggesting the sender was a ‘comedy genius’. 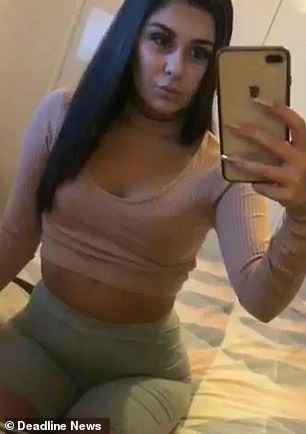 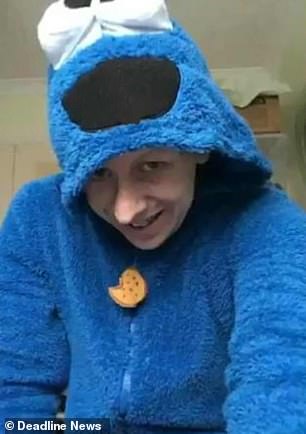 Emma Miller (pictured, left) received a message from a male dressed as the Cookie Monster (right) in a video that has been viewed 244,000 times

Social media users shared their amusement at the video after it surfaced online, which this man speculating that the sender was a comic genius 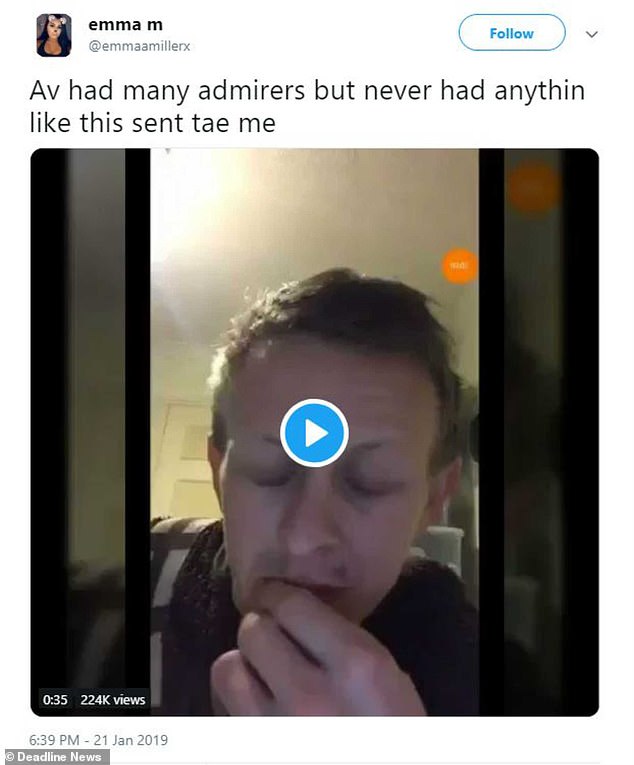 The clip features flower petals cascading down the screen before a series of images pop up, with the first one of him dressed as the Sesame Street character.

There is then a series of Emma’s selfies interspersed with images of the sender ‘Either a complete helmet or a comedy genius, can’t quite figure it out yet.’ Victoria MacKenzie said: ‘Why’s no one done this for me?’

Another wrote: ‘Why won’t someone love me like this?’ and Alice Wiggins said: ‘Howling, imagine the time it took to produce and edit that number.’

Police Scotland advises that users of social media consider picking user names that don’t reveal their actual identity, date of birth or where they live.

Officers recommend setting profiles to private so that only friends can see what’s on the profile.

This limits the likelihood of strangers getting in touch. Users are also advised to limit the amount of personal information revealed online.

Last year, a customer assistant revealed the creepy messages she was sent by an admirer who was able to track her down on social media.

The man in that case described Ciara Welsh, from Glasgow, as a ‘piece of meat’ before admitting that he was being ‘creepy.’

She recorded the voice messages sent to her on Facebook and uploaded them to Twitter where it racked up more than 400,000 views.

The Newest: Connecticut Sen. Murphy sails via...
Man, and girl, eight, are killed instantly during horrific car crash
This Morning: Rochelle Humes praised by viewers during her first day as Holly Willoughby's stand in
Home Bargain's sold out £7 slime advent calendar is being sold on eBay for FIVE times the price
Man, 35, is charged with murder of father, 51, who was stabbed to death on a train
ISIS held territory has been '100 per cent eliminated' in Syria, White House reveals
Hull mother banned from having visitors hits back at neighbours said she had wild parties
Sir Michael Palin reveals he set fire to his house and was rescued by 86-year-old neighbour