is to hold its first election since 2014, when a coup overthrew a democratically elected government and crushed dissent, the king has announced.

Thais will go to the polls on March 24 after more than four years of military rule which has seen the constitution rewritten and junta allies appointed across the bureaucracy.

The date was revealed shortly after King Maha Vajiralongkorn issued a royal decree calling for a general election to be held in the country this year. 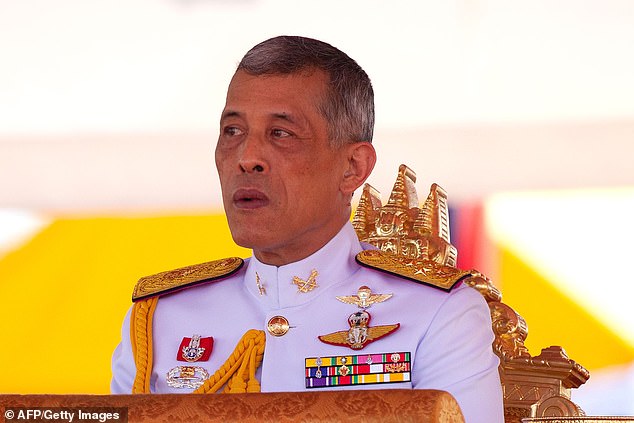 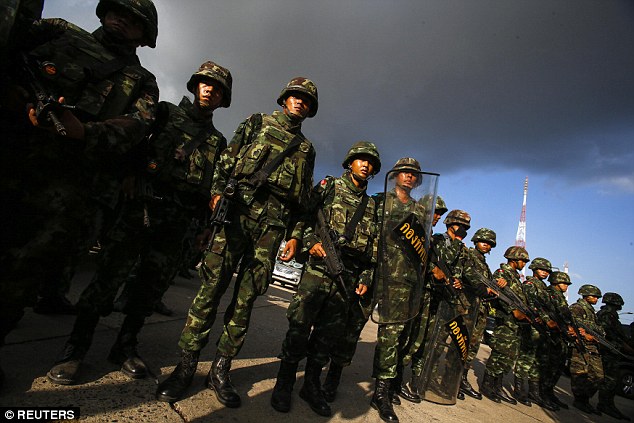 Thailand is to hold its first election since 2014 when a junta overthrew a democratically elected government and crushed dissent. Pictured: Thai soldiers during the coup five years ago

The poll date is set to ignite campaign season in a country where colourful and boisterous political rallies have often tipped into deadly violence.

The office of Prayut Chan-o-cha, who is also prime minister, called for an ‘environment of orderliness, civility and unity’ – although violence is unlikely among a public tired of political conflict.

An array of new parties – including some aligned to the military, others to the still powerful Shinawatra family – have already begun meetings and recruitment as a blizzard of names are tossed up as likely future prime ministers.

Those include Prayut, who has spent months touring the country as he rebrands himself from a gruff man-in-khaki to an avuncular civilian leader with a common touch.

Yet he is deeply unpopular among many Thais, who have wearied of his hectoring style as well as a junta accused of running down the economy and doing little to address graft, poor education standards and the kingdom’s chasmic social inequality. 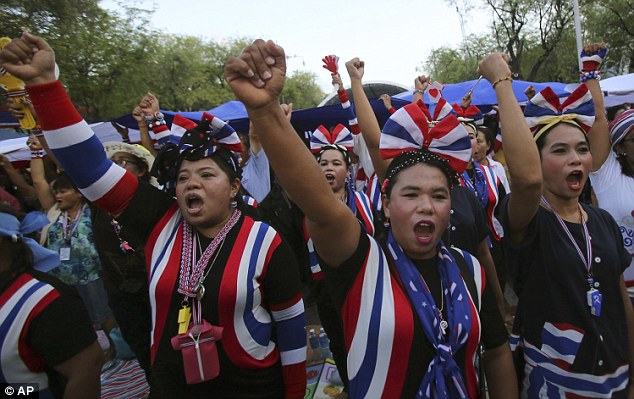 Thailand’s Election Commission on Wednesday announced that the nation’s first general election since the military seized power in a 2014 coup will be held on March 24. Pictured: Anti-government protesters in 2014

Even if the junta’s rivals do well in elections, any new civilian government is expected to be hamstrung by the military-scripted constitution.

It allows for a fully appointed upper house and embeds 20-year strategies governing everything from the economy to education.

‘You can call it hybrid democracy,’ said Somjai Phagaphasvivat, a political analyst at Thammasat University.

But he cast doubt on whether the caustic divisions of the past had been healed.

That catapulted the then-political neophyte Yingluck, the younger sister of billionaire Thaksin Shinawatra, into office as head of the Pheu Thai party.

Questions remain over Pheu Thai’s enduring electoral pull among its vote banks in the poor, rural north and northeast without the star power of the brother-sister duo, both of whom are in self-exile. 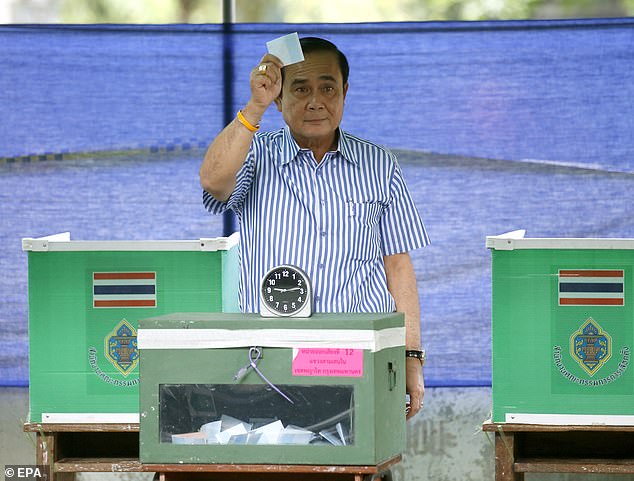 The office of Prayut Chan-o-cha (pictured), who is also prime minister, called for an ‘environment of orderliness, civility and unity’ – although violence is unlikely among a public tired of political conflict

The party is ‘ready’ for the vote, spokeswoman Ladawan Wongsriwong said.

‘Pheu Thai is a big party and we have been trusted across the country for a long time.’

But the long years of junta rule have decimated the networks of the Thaksin-affiliated ‘Red Shirts’, while scores of key Pheu Thai politicos have been co-opted into the army-linked Phalang Pracharat party.

The Shinawatra clan sits at the core of Thailand’s political rupture.

Their supporters say they are the first political dynasty to address the aspirations of Thailand’s poor in a sharply hierarchical kingdom where wealth is hoarded by the Bangkok business elite.

To their enemies among the ultra-royalist, conservative elite, they toxified Thai politics and society with graft, nepotism and populist handouts.

After nearly five years of military rule, Thailand will hold elections on March 24.

The poll will be the first since generals ousted a democratically elected government in 2014 after violent street protests.

Here is a brief look at two turbulent decades in Thailand’s politics.

In the wake of the Asian Financial Crisis, policeman-turned-telecoms giant Thaksin Shinawatra storms into Thai politics riding a populist wave to a poll victory in 2001.

The waves from the financial crisis created his opening.

Other politicians ‘were very discredited at this point’, Thailand historian Chris Baker told AFP. ‘This was Thaksin’s great opportunity to rise.’

After years of politics marked by a boom and bust cycle of coups, Thaksin’s government becomes the first elected civilian administration to complete a four-year term.

But a controversial ‘war on drugs’ kills upwards of 2,500 people, while scores die in the Muslim-majority south in crackdowns by security forces which ignite a new round of insurgency.

Thaksin sweeps polls in 2005 But the victory is short-lived. His premiership is engulfed by financial scandal and protesters take to the streets.

Thaksin calls another election the next year but is booted out months later in a bloodless coup.

Violence soon dominates the political stage, with Bangkok descending into a cycle of rallies, riots – including a blockade of city airports – and protests in 2008.

With Thaksin in self-exile and his successors deposed by the courts, the government of Abhisit Vejjajiva struggles for legitimacy after being installed without a public mandate.

Thaksin is convicted in absentia on charges he says are politically motivated and goes into self-exile.

Bangkok-based royalists known as the ‘Yellow Shirts’ face off in the streets against the pro-Thaksin ‘Red Shirts’.

In 2010 more than 90 people are killed as the army – led by current junta leader Prayut Chan-O-Cha – opens fire on Red Shirts gathered in downtown Bangkok.

The city centre is set ablaze in days of mayhem.

Historians dubbed the period from 2006 Thailand’s ‘lost decade’, as Southeast Asia’s most dynamic economy slows during the political paralysis.

The protest years saw deep social cleavage between the rural poor and wealthier middle and upper classes – the latter mostly in Bangkok.

‘Urban voters were allied with the senior military officials and aristocracy,’ said Paul Chambers, a lecturer at Thailand’s Naresuan University.

But protests erupt halfway through her administration as Yingluck tries to gain an amnesty for her brother.

The fever reaches breaking point in 2014 as tens of thousands of opposition protesters vow to ‘shut down’ Bangkok until Yingluck quits and the Shinawatras are cut from Thai politics.

Yingluck calls an election to break the impasse but the death toll on the streets mounts and the vote is annulled.

An embattled Yingluck is hit with charges related to a rice subsidy scheme for her rural base and is removed from office.

In 2014 the army declares martial law in the name of bringing stability to a country in paralysis and then carries out its 12th successful coup since 1932.

Junta leader Prayut Chan-O-Cha oversees a crackdown on dissent and expands his powers, winning a referendum in 2016 to change the constitution.

Amid the upheaval revered King Bhumibol Adulyadej, who was seen a rare figure of unity over a seven decade reign, dies that year.

Thailand plunges into mourning as politics goes into the deep freeze.

Facing jail, Yingluck flees the country in August 2017 and joins her brother in self-exile.

The junta promises elections but delays them repeatedly. Finally on Wednesday polls are announced for March 24.

But experts warn Thailand’s democracy will not be the same after years of junta rule.

Thaksin, a policeman-turned-telecom billionaire, was toppled by a coup in 2006 and went into self-exile in 2008 over a graft conviction.

Yingluck fled Thailand in 2017 before she could be sentenced for criminal negligence linked to a rice subsidy scheme.

The siblings have crept back to prominence in step with the approach of elections.

Thaksin has launched a weekly podcast, sharing his views on everything from Bangkok’s pollution crisis to the global economy.

‘He still figures in Thailand as a popular hope,’ Chris Baker, a Thai history expert said, despite the ‘extraordinary myth’ of the billionaire businessman as a kindred spirit of the common man.

Many Thais hold little enthusiam for elections, widely seen as stacked in favour of the military.

‘Under the junta the country is just going from bad to worse,’ said news vendor Lek, declining to give her full name.

‘Even if there is an election, it will likely be the same prime minister.’