A black undercover St Louis police officer claims his colleagues beat him ‘like Rodney King’ when they mistook him for a protester at a 2017 rally against racial profiling, newly released court documents have revealed.

Detective Luther Hall, who is black, called the attack a ‘free for all’ in an affidavit that the FBI used to justify their search of four officers’ cellphones.

Officers Dustin Boone, Randy Hays, Christopher Myers and Bailey Colletta were charged in November after the FBI investigated Hall’s attack and the detention of other protesters at a demonstration on September 15, 2017.

The rally was in response to the acquittal of St Louis officer Jason Stockley, who had been charged in the fatal shooting of a black man.

Hall and his partner were undercover ‘documenting protest activity and property destruction’, FBI Special Agent Darren Boehlje wrote in an affidavit supporting the search warrant applications, according to the .

He reportedly told someone at headquarters that officers ‘beat the [expletive] out of him like Rodney King’, referring to the black construction worker who was beaten by four Los Angeles police officers in 1991, sparking massive riots. 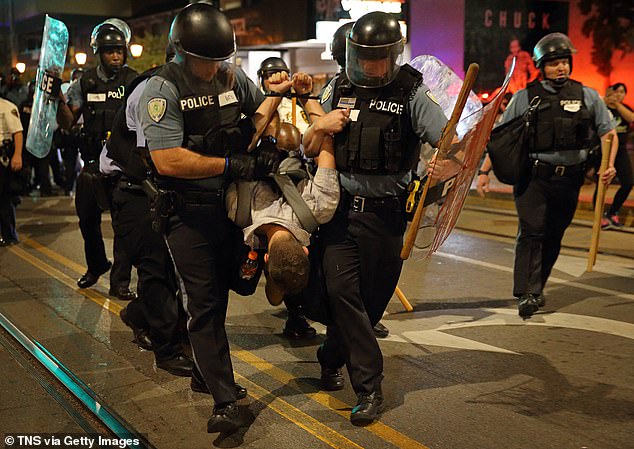 Hall, who was carrying a Nikon camera and a cellphone, was separated from his partner while fleeing officers who were firing pepper-spray pellets and bean bag rounds into the crowd, the affidavit says.

Hall said that after a police SUV pulled up, he was getting on he knees when officers picked him up twice and slammed him to the ground face first.

He was allegedly told to put his hands behind his back but couldn’t because officers were standing on his arms, Boehlje wrote in the FBI affidavit.

Hall’s cellphone screen was shattered in the melee, and he watched as an officer took out the battery out of his camera and threw the camera to the ground, breaking it.

The affidavit suggested that there may be video from the incident, because Hall’s cellphone was ‘actively recording’ as he surrendered.

Not wanting to reveal his identity and blow his cover, Hall made eye contact with someone he knew, and that person got two SWAT officers to take him away.

The undercover officer received medical treatment in an armored vehicle before being taken to a hospital.

The affadavit states that it took three layers of stitches to close the hole in Hall’s lip, and that he suffered multiple herniated discs. A jaw injury has made it hard to eat, and Hall has lost about 15 pounds, it said. 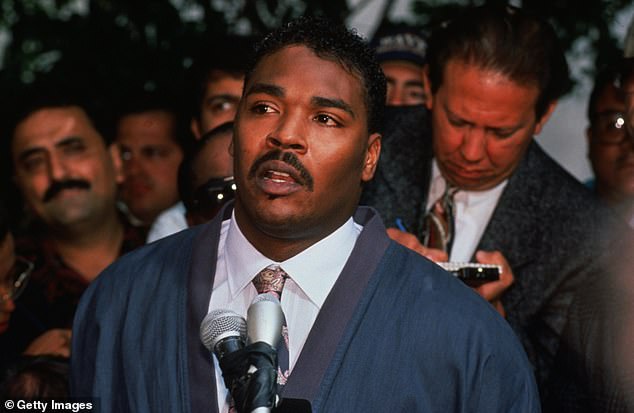 Hall reportedly told someone at headquarters that officers ‘beat the [expletive] out of him like Rodney King’, referring to the black construction worker (above) who was beaten by four Los Angeles police officers in 1991, sparking massive riots

Boone, Hays and Myers were accused of the physical assault and charged with depriving Hall of his constitutional rights and conspiracy to obstruct justice.

Myers is also accused of destroying Hall’s cellphone, while Colletta is charged for allegedly lying to the federal grand jury investigating the attack.

The indictment says the three thought Hall was a protester and assaulted him “while he was compliant and not posing a physical threat to anyone.”

All four officers were on duty at the protests as part of the ‘Civil Disobedience Team’.

Several had allegedly exchanged electronic messages before and after the arrest expressing ‘disdain’ for protesters and ‘excitement about using unjustified force against them and going undetected while doing so’, the indictment stated.

It said that Hall was assaulted ‘while he was compliant and not posing a physical threat to anyone’.

The affidavit obtained by the Post-Dispatch also details text messages allegedly exchanged between Hays and Boone after the attack.

The day following day, Hays wrote that he’d told someone ‘the ass whooping can be explained. The camera thing can’t and we weren’t a part of that’.

Boone replied that he was ‘WAY more alright with what u and I did than what the others did! I don’t like that we put our hands on another cop, but the situation was a little [expletive] up, too, wasn’t JUST us’, the affidavit states.

Hays agreed, writing that Hall ‘could’ve announced himself any time. And he wasn’t complying. The camera thing is just ignorant, nothing we all haven’t done and if it was a protester it wouldn’t be a problem at all’.

A week later, Boone wrote that someone was trying to call Hall to arrange an apology.

Hays replied that he wanted to apologize ‘before someone gets in his ear and true (sic) to turn this into something more than it was’.

Boone responded: ‘EXACTLY! That’s my biggest fear now that it’s getting around. Somebody puts money or race in his ear and he listens for some reason and it’s over before we get to say a word.’

Boone contacted Hall via text on September 25, offering an apology and to extend another in person.

The Jacksons carry out at Rewind North pageant in Cheshire after their father Joe's dying
Trump calls on Jeff Sessions and DOJ to investigate NYT Op-ed writer
R Kelly pleads not guilty to 10 counts of criminal sex abuse with three teens
Heroic grandmother, 75, holds car theft suspect at gunpoint in her front yard
Ashton Kutcher resists posting a 'snarky tweet' after release of ex Demi Moore's bombshell memoir
75 years on, an all guns blazing account of the toppling of the Tirpitz
ANGELA LEVIN: How DID our Royal Family come to this?
Boris Johnson leaves hospital: PM stops off in Downing St with Carrie, to broadcast heartfelt thanks