Fashion has certainly changed over the years with some fads becoming cool again.

However it appears that a particular look from an old 1975 Target catalogue won’t be making a comeback anytime soon, with social media users poking fun at the re-surfaced ensemble.

Tucked into the shorts were slim-fitting white button up shirts paired with loud and wide ties. 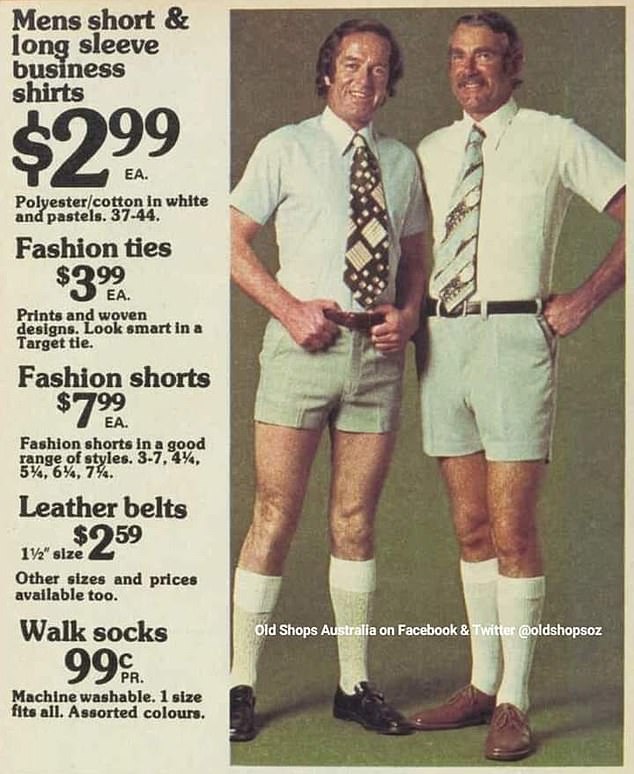 A particular look from an old Target catalogue won’t be making a come back anytime soon, with social media users mocking the ensemble

The ensemble was completed with knee-high socks and tan and dark lace-up shoes.

‘Target Australia 1975: No aircon, no worries – gents stay cool and comfy with quality summer businesswear at unbeatable prices,’ the caption to the summer advertisement read.

‘Think my primary school principal shopped at Target,’ one person commented on the snap.

‘My [husband] better start dressing sexy like this or he’s getting divorced,’ another said.

One said to a friend: ‘Back to work is a week away so you still have time to fashion up.’

Another said: ‘Oh my Lordy, that is not a fashion I want to come back.’

In September 2018 shoppers with a fondness for nostalgia took a trip down memory lane after catalogues showing Father’s Day gifts from the 1980s emerged.

The vintage glossies resurfaced via a Facebook page dedicated to old advertisements and featured a range of catalogues for Kmart. 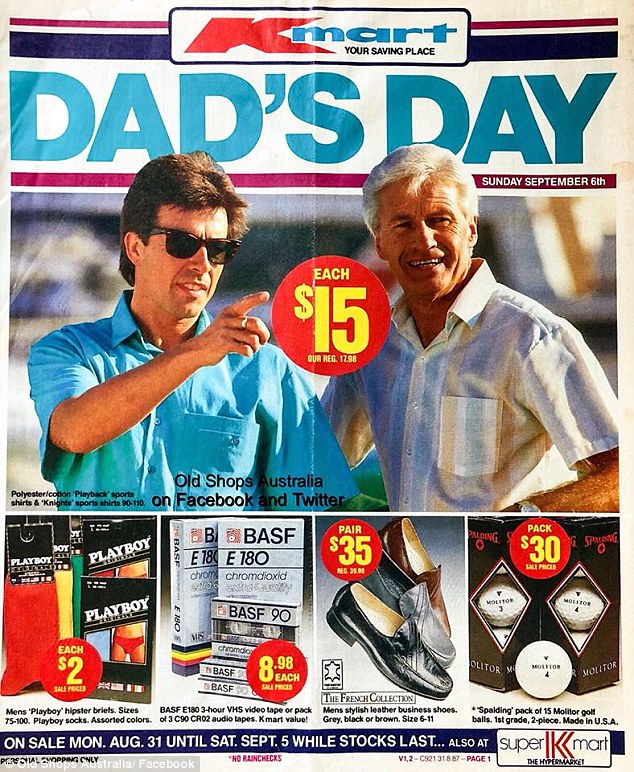 Thirty years ago, stylish dads may have been given a polyester/cotton sports shirt (pictured top), some Playboy underwear (bottom left) or a pair of French Connection loafers (pictured, centre right)

Printed in 1987, the pages show those looking for the perfect gift may have opted for all sorts of gems such as the portable two-in-one hair dryer that converts into an iron.

Other great presents included some rather racy underwear courtesy of Playboy, a range of classic colognes including Brut 33 and Old Spice, along with some high-waisted Bonds shorts. 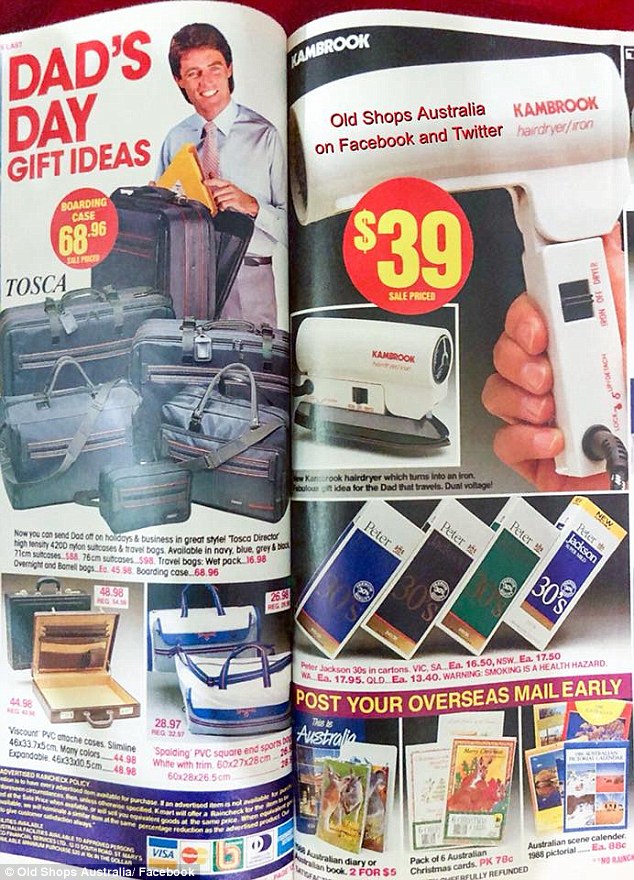 For the father who enjoyed an outdoors experience, one of the pages featured fishing rods, a collapsible golf buggy and inexpensive ammunition, if a spot of hunting was on the cards.

Rad dads of yesteryear may have been given anything from a cute Casio Tone organ to a must-have Walkman or portable cordless phone.

And while today it seems almost unimaginable, giving dad a carton of cigarettes wasn’t something he’d likely frown upon. 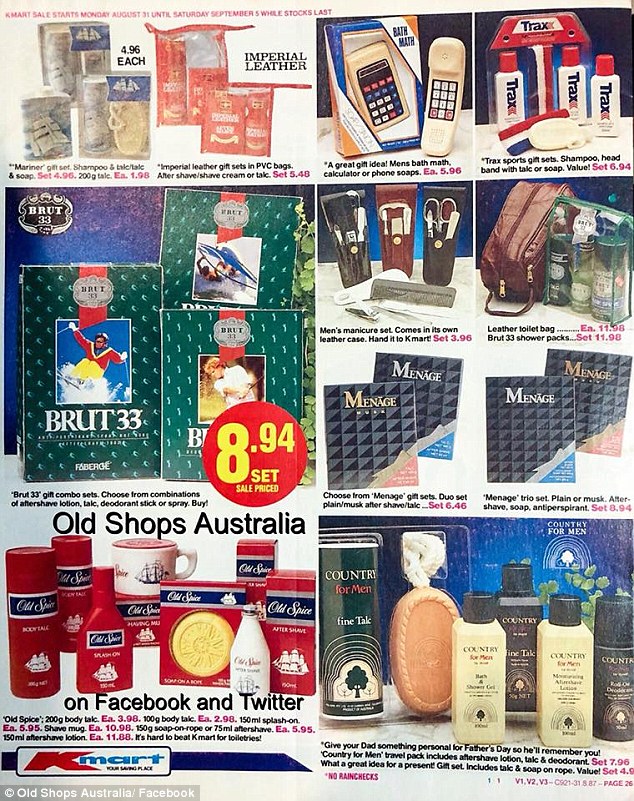 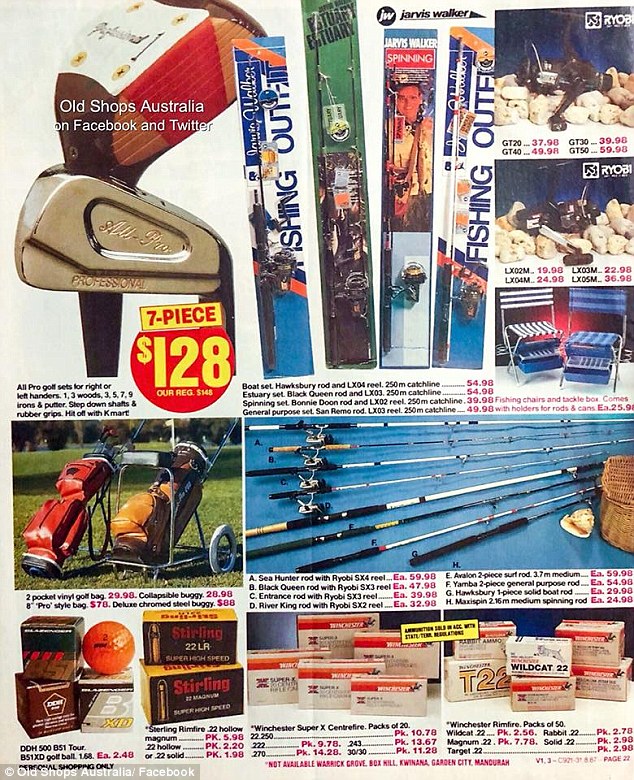 Those who have seen the catalogue pages online have shared their own stories about some of the products feature.

One person, Sam said he had ‘one of those hair/dryer iron… probably since then’. 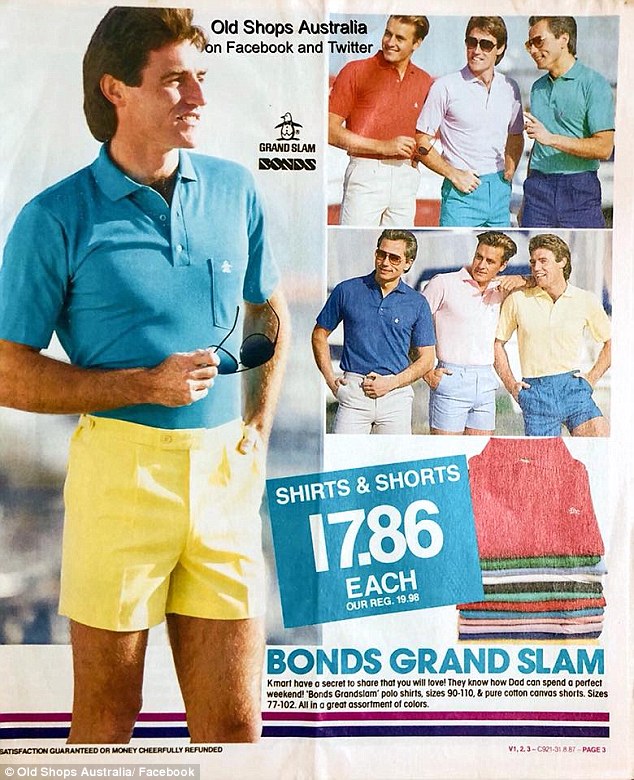 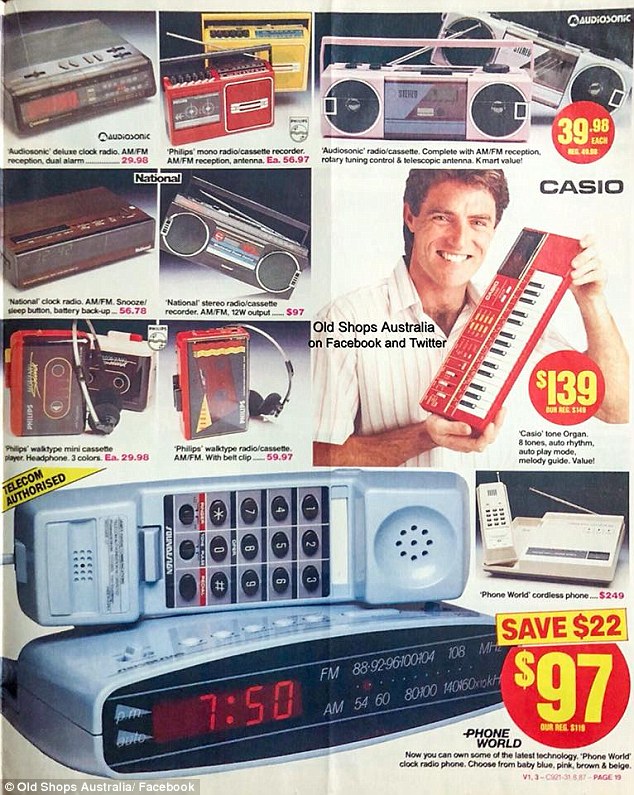 A Casio Tone Organ made for a quirky gift, however, it’s unlikely this could beat the must-have Walkman or the cordless phone

Michelle shared how the Old Spice was her ‘go-to gift’ every Father’s Day.

‘Remember buying it for $2 one year at school Father’s Day stall. Dad said he loved it so I bought it every year. In hindsight though, not sure he ever wore it,’ She wrote.

While Gail shared a fond memory she had of owning the much-coveted red Casio tone organ.

‘I had that red Casio keyboard…you buy different cassettes and learn how to play the songs with the lights above the keys…I loved it!!!’ She said. 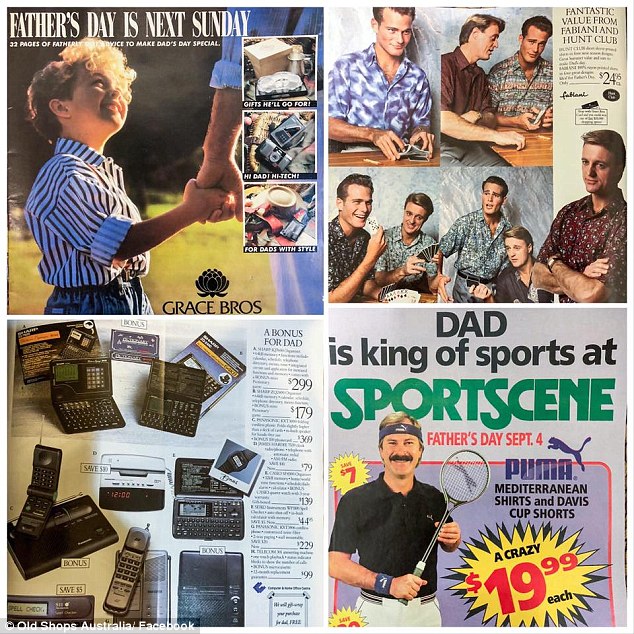 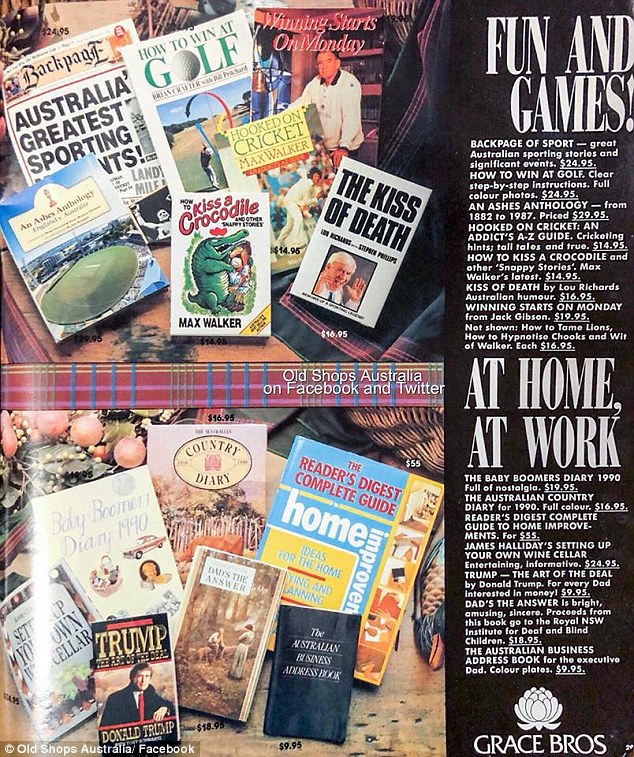 The department store Grace Bros offered tennis-mad dads a range of Puma-brand gear including a shirt, headband, wristband and tennis racquet for ‘A crazy $19.99 each’.

Other gifts from the department store included some very hi-tech looking gadgets including a flip-top cordless phone, a range of calculators and an on-trend digital watch in black. 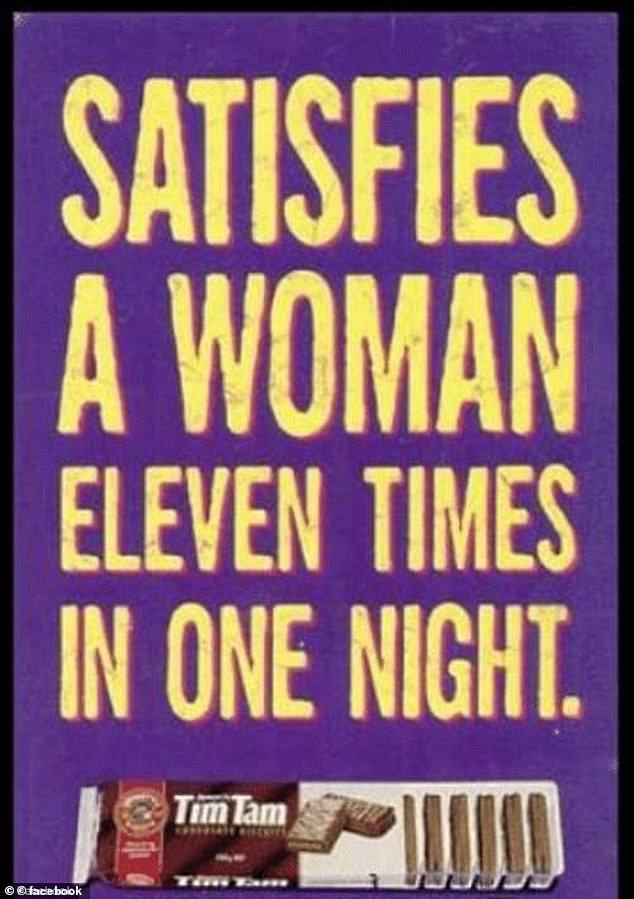 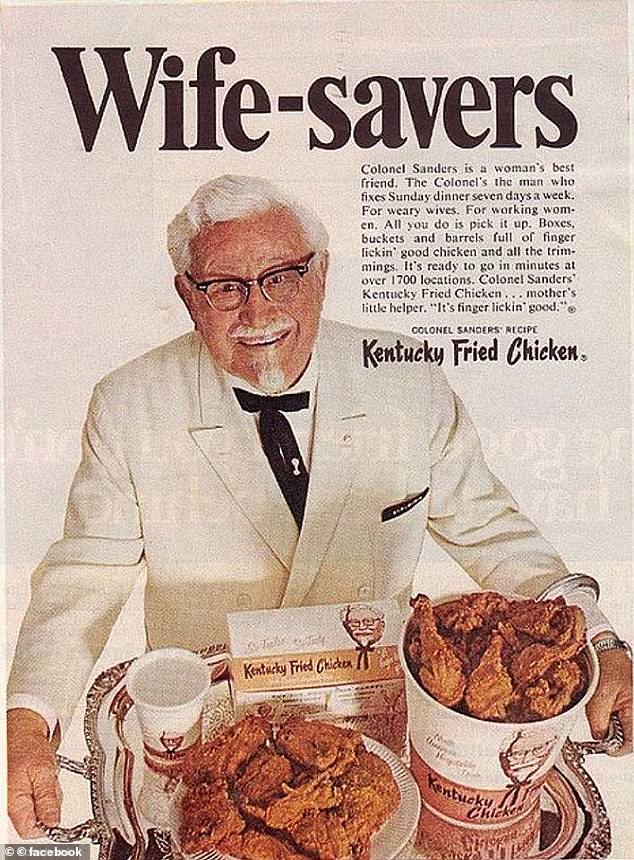 However not all of the older advertisements are as funny or innocent, with some now being considered extremely sexist.

For instance an advertisement from Tim Tam reads that the product can help ‘satisfy a woman 11 times in one night’.

While a KFC one called the brand a ‘wife-saver’ and ‘a woman’s best friend’ as it helps ‘weary wives’ prepare a meal.

Young Dutch soccer player dies after on-field colllision
Motorist becomes 10th person to die during Yellow Vest riots
Man in his 30s is stabbed to death in south-east London
March sees slowest asking house prices rise in eight years, says Rightmove
El Chapo and his wife to launch signature clothing brand while kingpin is behind bars
LightSail has raised its orbit driven only by SUNLIGHT in landmark achievement
Pictured: 'Murder suicide' married couple
First picture of Oxford graduate whose body was found in a ravine 'after he fell 1,300ft' in Greece