She has a net worth of $6m and sings about how Fancy she is.

But that didn’t stop rapper from knowing a good thing when she saw it, as she was pictured leaving a Greggs in Dumfries, Scotland over the weekend.

The 28-year-old was dressed down as she was pictured leaving the eatery with a security guard in tow, as her beau Playboi Carti faced a court rap nearby. 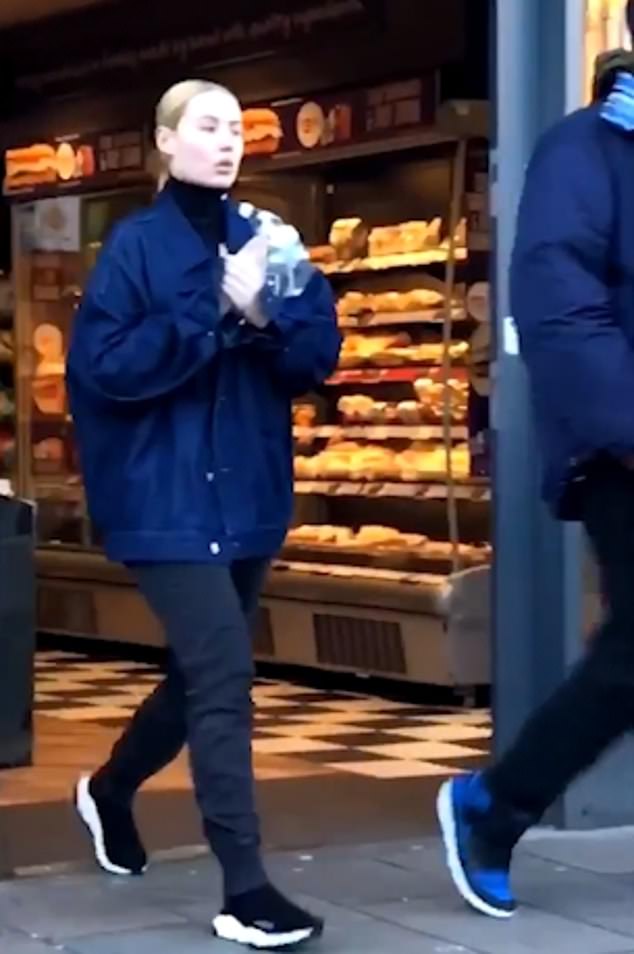 ‘Was she picking up a vegan sausage roll?’ Iggy Azalea stunned fans when she pops into a Greggs in Dumfries, Scotland over the weekend… as her beau Playboi Carti faced a court rap 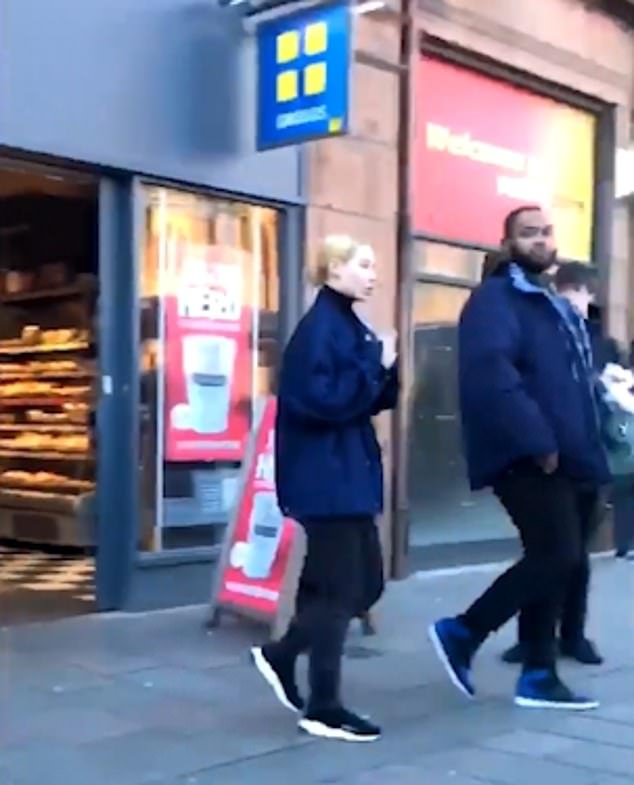 She’s so Fancy: The 28-year-old was dressed down as she was pictured leaving the eatery with a security guard in tow

Fans went wild for Iggy’s appearance at the low-cost bakery, taking to Twitter to wonder if she was there to pick up one of the much-publicised vegan sausage rolls.

‘Not even Iggy Azalea can turn down a greggs.’

‘There are a lot of things mad about iggy azalea but going greggs is not one. wot? just cos she’s got money you lot wanna deny her a sausage roll or the joy of cheese and onion pasties?’

Freezing: Iggy is thought to have been checking out the hot rolls during her visit to the low-cost eatery

‘No f***ing way was iggy azalea in a Greggs in my town?! Was she after a vegan sausage roll?’

‘People really shaming Iggy because she went to Greggs??? Greggs is the truth.’

Iggy’s boyfriend Carti, real name Jordan Carter, 22, was fined £800 at Dumfries Sheriff Court, (£500 for assault and £300 for the damage), for punching his tour bus driver around the corner, according to

Loving it: Twitter went wild for Iggy’s superstar arrival at Greggs and were excited about what she would have bought there

The site reports that the rapper, who has been dating Iggy since September, appeared in court for punching his driver and shattering a window on his luxury tour bus when it broke down after a sold-out Glasgow gig.

He is said to have lost his temper when his transport suffered heating problems and then refused to start as he headed to London.

The rapper, who is said to be worth more than $11.5million, denied assault, but was found guilty.

Both he and Iggy are now in Paris for Fashion Week. Iggy was seen heading out in a camouflage print jumpsuit, a bondage belt and thigh-high boots.

While Carti was dressed in a smart suit. 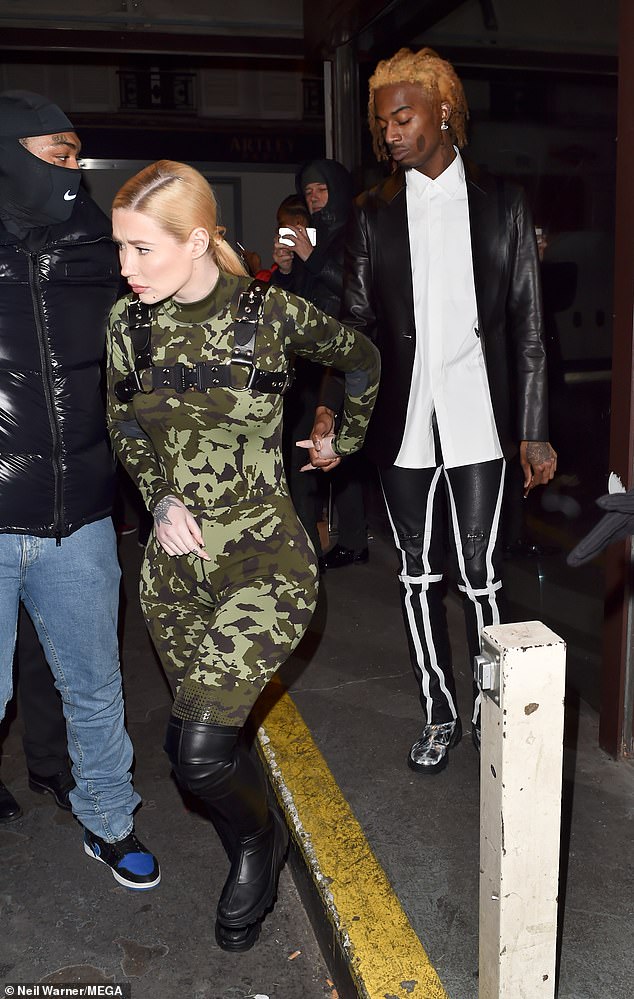 Her man: Iggy’s beau, Playboi Carti had been to court, where he was fined $1080 (£800) for punching his tour bus driver, despite pleading not guilty – the pair are now in Paris for Fashion Week 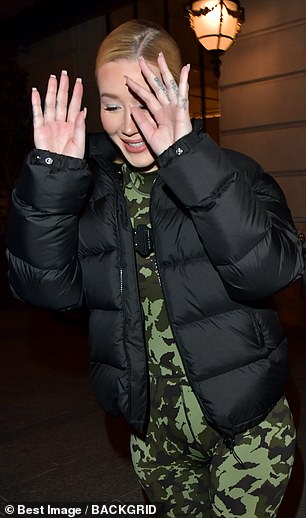 Fashion first: Iggy was wrapped up warm in her camouflage jumpsuit and padded jacket 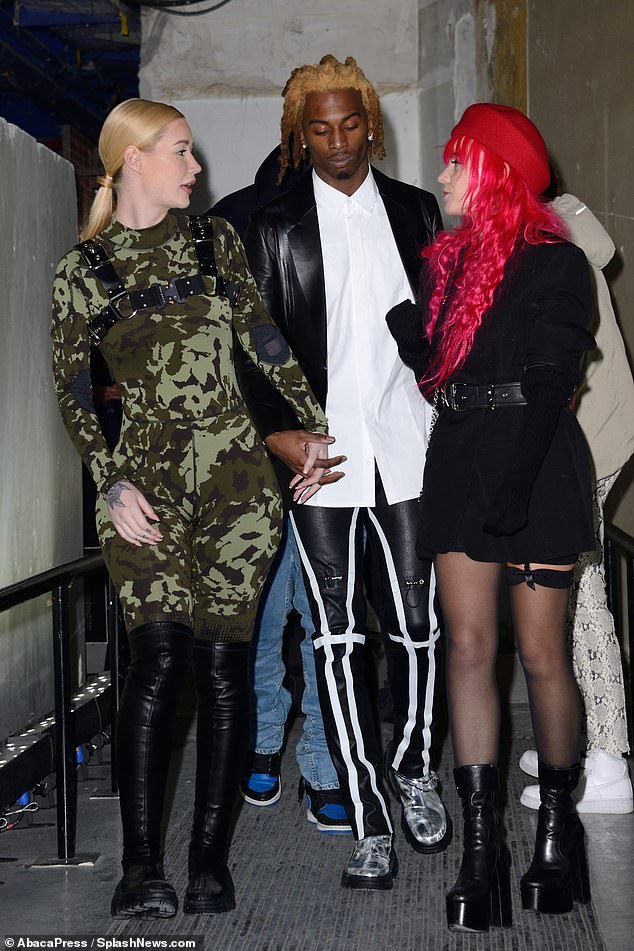 She’s not bothered: Iggy held hands with her beau, seemingly unfazed by his court rap

Curves for days: She looked incredible in her sexy outfit as she headed out with her rapper beau

Strictly's Gorka Márquez locks lips with girlfriend Gemma Atkinson in a smitten snap
Jordyn Woods looks stylish in a quirky pink playsuit
Made In Chelsea: Maeva strips down to lingerie for Miles after he tempts her with chocolate fondue
Gigi Hadid is suited and booted in a cream scribble print two-piece as she steps out in Paris
Rachel Weisz looks effortlessly demure in a white A-line shirt dress at Annabel's soirée
Phil Collins appears frail as he's pushed in a wheelchair... one day before falling onstage
Sofia Richie wows as she showcases her washboard abs in a tiny white bikini top at Hard Rock event
Eiza Gonzalez flashes her taut tummy in a Grateful Dead T-shirt while shopping in Beverly Hills