When most of us open the wardrobe door, we’re greeted by the sight of far too many clothes crammed into too small a space. With over-stuffed drawers and messy shelves, it’s impossible to find anything. But that’s not the case for Alaina Foy.

When she opens her wardrobe door, she’s greeted by a sight that would turn most women green with envy. For in front of her isn’t just a small closet, but a huge room with floor-to-ceiling rails, drawers and racks to accommodate every piece of her extensive wardrobe and shoe collection.

And in pride of place, in the centre of the room, is her beautiful ivory wedding gown. 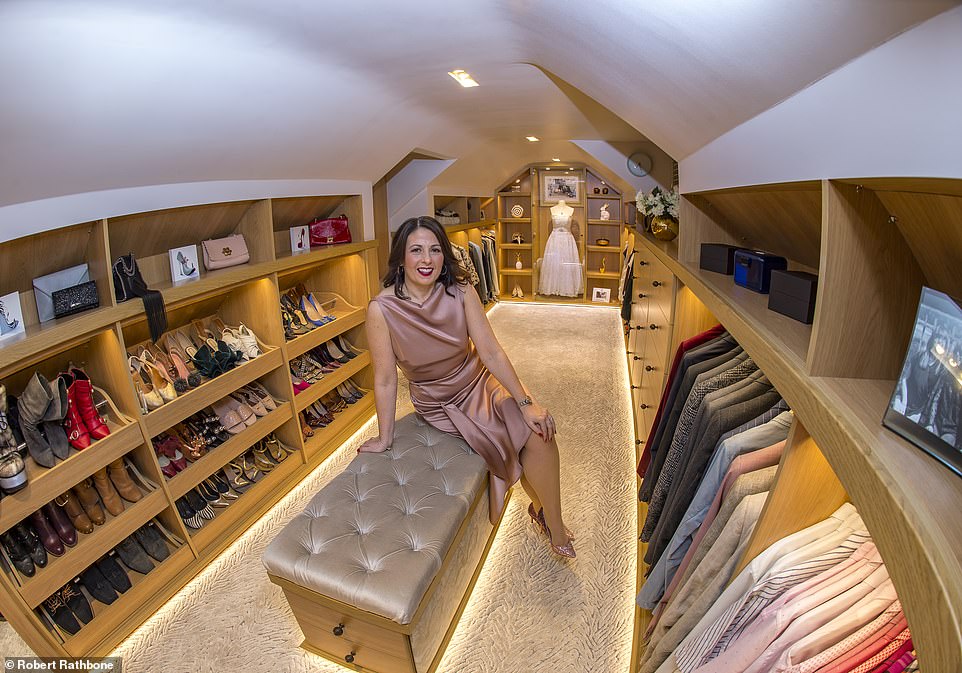 Stunning: The walk in wardrobe at the home of Alaina Foy from East Markham, Newark, Notts 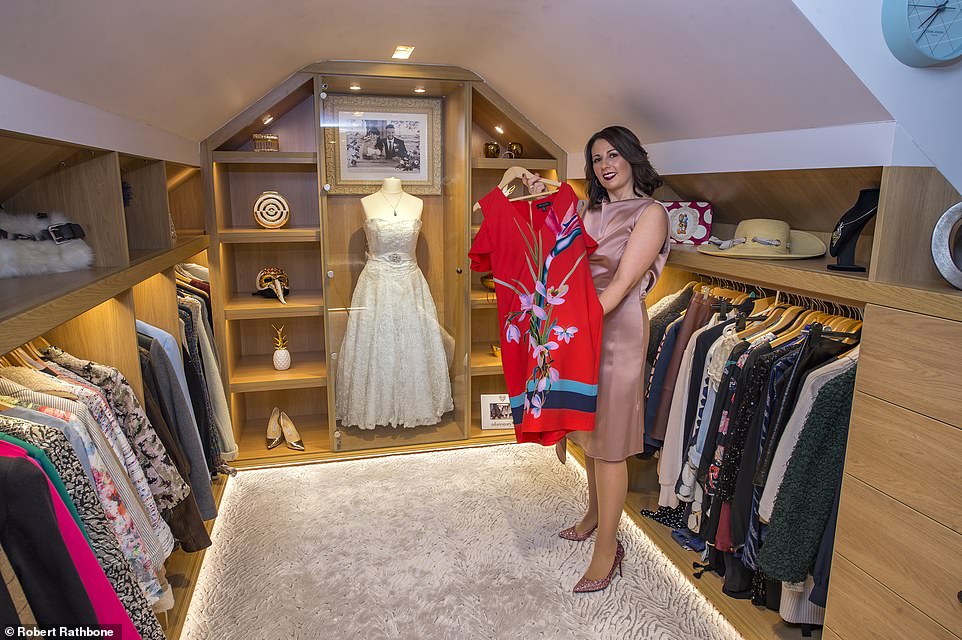 Wedded bliss: Alaina Foy’s wedding gown is the centrepiece of her walk-in wardrobe

‘It’s on a mannequin inside a bespoke display case which also contains my favourite pair of Jimmy Choo shoes and a framed photograph of my husband Andy and me on our big day,’ says Alaina, who married in 2015.

‘Every time I walk in here and see this beautiful reminder of such a special day, it lifts my spirits.

‘The room is soothing and calming – it’s my haven. After a tough day at work, I’ll come here to have a quiet moment surrounded by beautiful things.’

But while dedicating a whole room of your house to your clothes and shoes might seem self-indulgent, Alaina, 45, is far from alone. Walk-in wardrobes are now the must-have for aspirational middle-class homes, with wine cellars, garden pods and second kitchens now relegated to yesterday’s news.

Celebrities adore them too. Actress Catherine Zeta-Jones regularly posts pictures on Instagram of the sprawling walk-in wardrobe at her Hollywood home which has a huge shoe closet, with row upon row of heels on display. 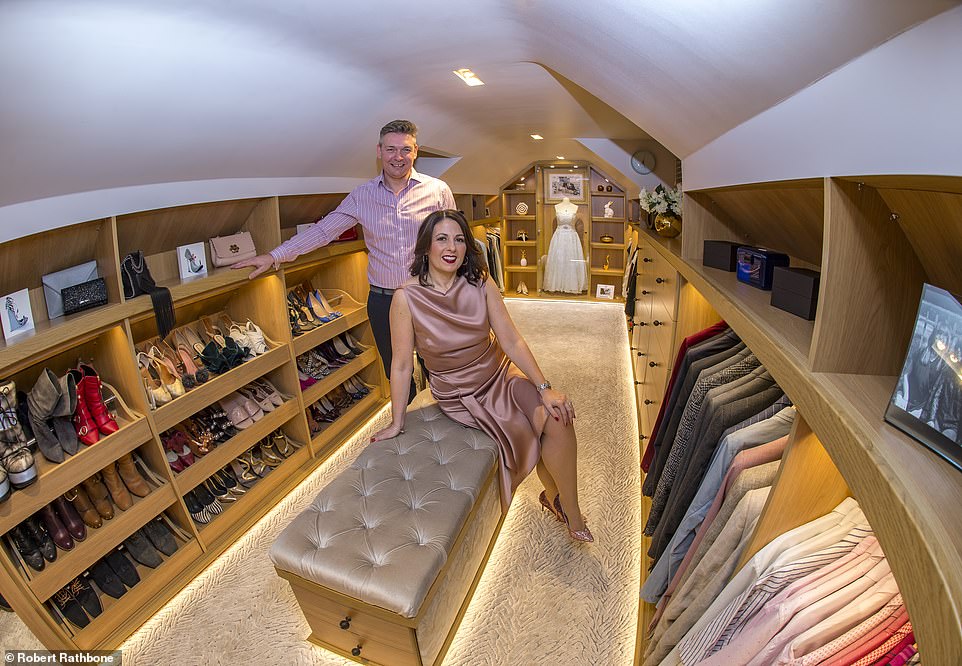 And the Duchess of Sussex, who had one in her Toronto home, is believed to be planning to install one in her and Prince Harry’s new home, Frogmore Cottage in Windsor, as part of its multi-million-pound renovation. For Alaina, an NHS director from East Markham, Nottinghamshire, hers is the coming to fruition of a long-held dream.

‘For as long as I can remember I’ve wanted a space like this. What woman wouldn’t?’ she says. ‘I love fashion, and to have a dedicated place for all my clothes is a dream come true. I love seeing my Mulberry handbag and my Manolo Blahnik heels on display, rather than stashed in a cupboard.’

She and Andy, 45, bought their 19th-century cottage in 2013, with Alaina immediately earmarking the fifth bedroom as a wardrobe.

Her architect husband then set about designing the dream room, with English oak drawers, shelving, rails, slide-out Strachan shoe racks and luxurious seating. ‘The cabinet for my wedding dress was Andy’s idea,’ says Alaina. ‘He knew how much I loved my dress and thoughtfully wanted me to enjoy it every day. It’s touches like that which make it more than a wardrobe. It was a labour of love by him for me.’

A very expensive labour of love – the oak drawers and bespoke touches means the 200sq ft space cost £30,000. And that’s not all – the total spend on the room, including an adjacent dressing room with more storage, was £54,000.

‘It’s an extravagance,’ admits Alaina. ‘But we work very hard, we don’t have children so we have more disposable income, and as this is our forever home, it’s going to give us years of use and pleasure. And it’s incredibly practical. Now our bedroom is solely for sleeping and relaxing – there’s no clutter or space taken up with lots of furniture. It feels very minimal, which I like.’

The space is very much Alaina’s domain. ‘Andy has a small section of the wardrobe for his things,’ she says. ‘We joke that an alarm will go off if he takes up any more space. He keeps the rest of his clothes in a separate dressing room, as we agree that this is my territory.’

Despite the cost, Alaina feels it was worth every penny. ‘My sister Emma says she loves the room and wants one too, while my friend Lynn became tearful when she first saw it because she thought it was so stunning. Seeing a reaction like that, I felt incredibly lucky.’ 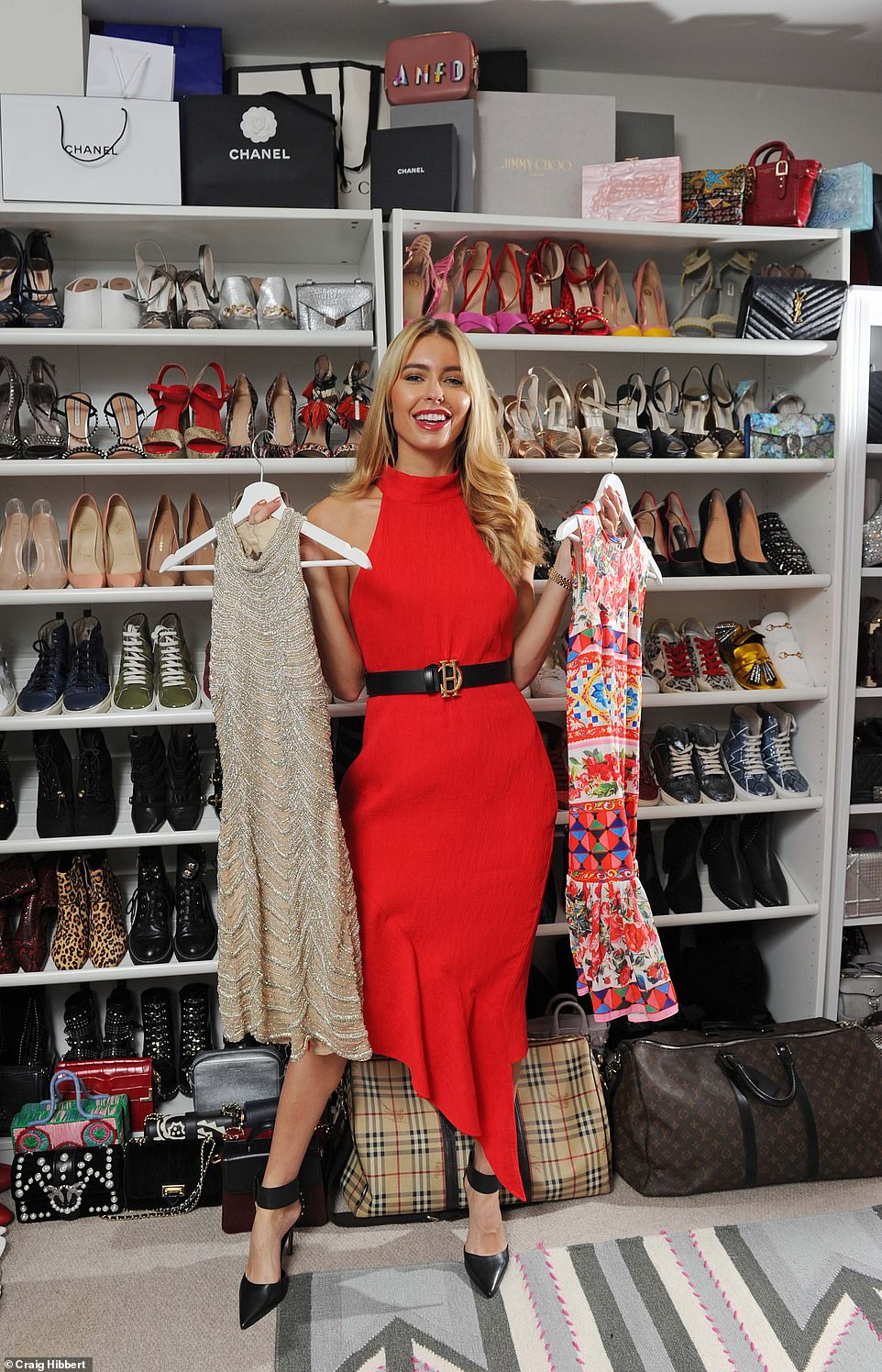 Well-heeled: Model Amy Neville with the shoe racks in the room she transformed herself 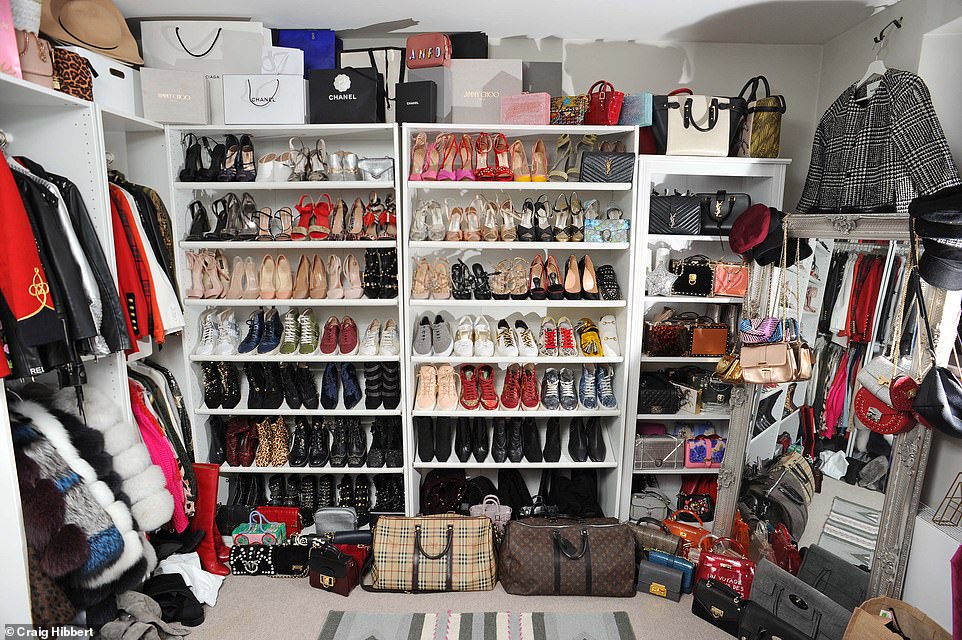 Wardrobe on a budget: Amy created her walk-in wardrobe for just £500 but some women shell out thousands on their perfect room 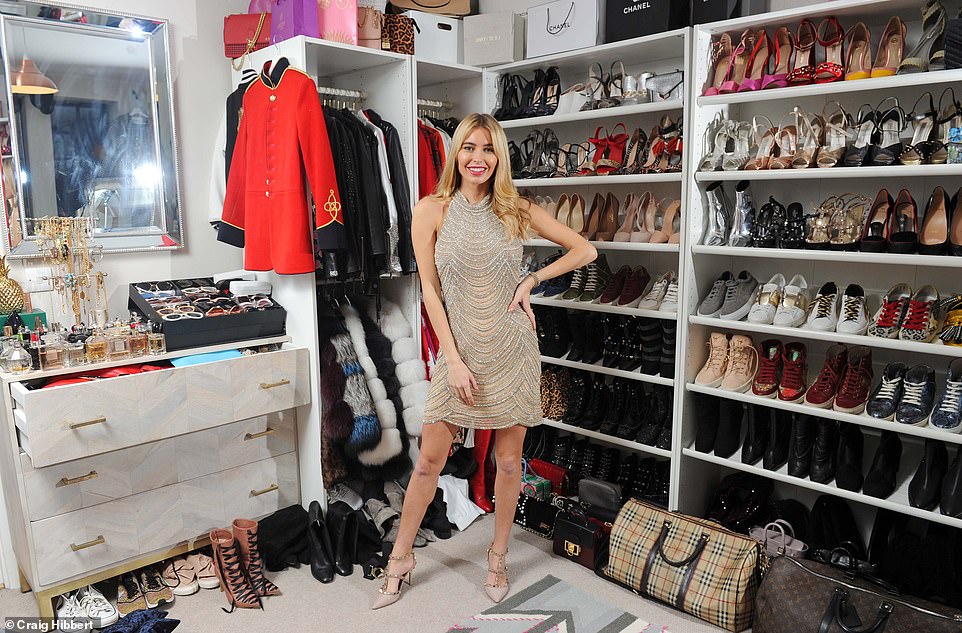 Amy says it’s more important to have a stunning wardrobe than a spare room to be home to her bags, shoes and clothes

But you don’t have to spend a fortune to get this most extravagant of additions to your home. Fashion model Amy Neville managed to turn a room into a walk-in wardrobe for just £500.

‘People love it and are amazed when I reveal it cost £500 and all the materials are from Ikea,’ says the 27-year-old from East London.

Amy converted the master bedroom of her rented two-bedroom apartment into her wardrobe, fitting everything herself, while she sleeps in the smaller second room. She is the first to admit it’s not the most practical of ways to use a second bedroom.

‘If a friend stays over, she has to share my bed as I now don’t have a spare room. And if more than one person is visiting, I have to ask them to book a hotel.

‘It’s not ideal but it’s more important to me to have a stunning wardrobe, plus I need it – I have so many clothes and accessories, particularly as I’m often gifted them,’ she says.

‘The materials were inexpensive, and flat-packed so they were easy to put together. I tried to be clever with the layout, to get as much storage in as possible while being able to see everything.

‘It’s a fun, sociable room. When friends come over before a night out, we’ll try on outfits while drinking champagne – they tell me they’re envious but I insist they could do something like this too.’

So where has this trend sprung from? Sheena Murphy, of interior design studio Nune, believes social media sites, with their endless images of inspirational interiors, have played a major role.

‘The rise in popularity of social media platforms such as Pinterest and Instagram have put the concept of a walk-in wardrobe firmly on the radar and I think we are more mindful of the idea when designing their homes,’ she says.

‘If you have the space, it’s a brilliant addition to a home because it provides a dedicated space for an activity many people spend a lot amount of time on each day.’ 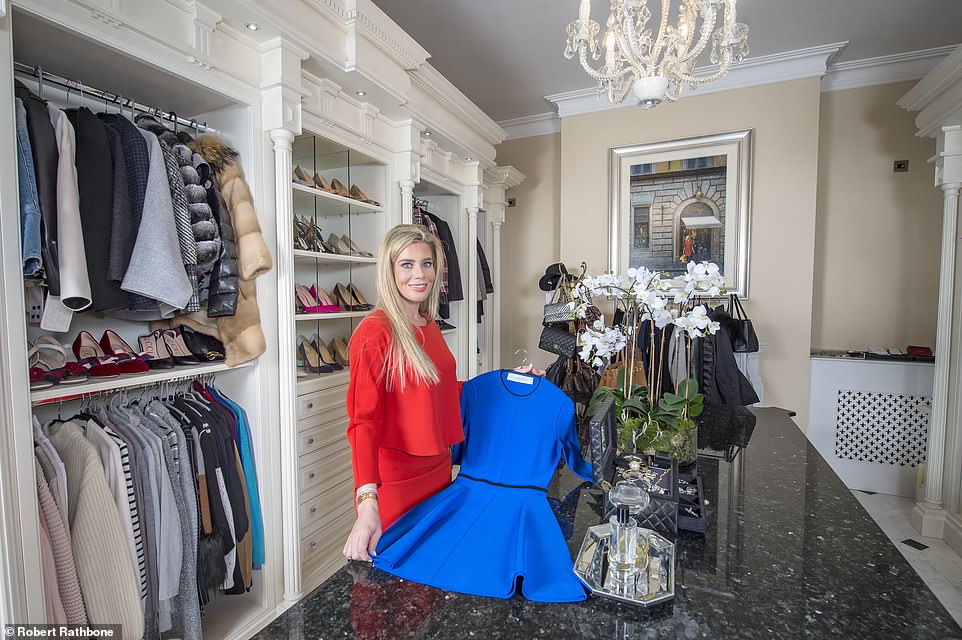 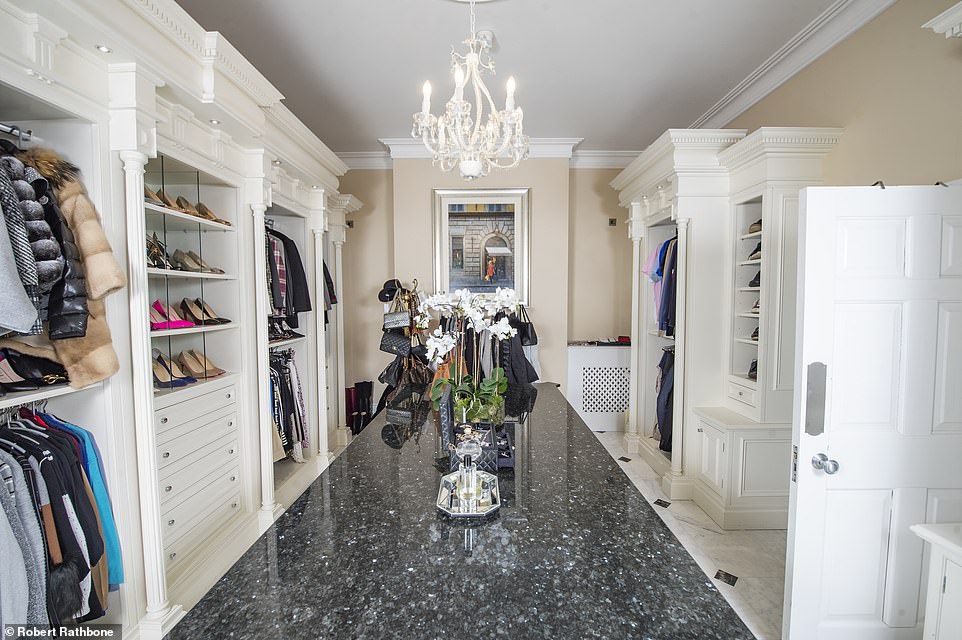 Bedroom conversion: Carolyn and her husband John, 52, have totally transformed a room of the their ten-bedroom property near Manselfield

For Carolyn Radford, 36, her walk-in provides a haven from her busy life as chief executive of Mansfield Town Football Club.

‘Life can be very hectic so when I need a moment to myself, this is where I come,’ she says.

‘To potter about, rearrange things and enjoy all the beautiful pieces of fashion I’ve invested in over the years. It’s a child and sticky-finger-free area.’

Carolyn and her husband John, 52, who have three sons – Hugo, five and twins Rupert and Albert, four – bought their ten-bedroom home near Mansfield a decade ago and have completely renovated it, including turning a bedroom into Carolyn’s walk-in wardrobe.

‘Since I was a child, I’ve always liked to have things neat, and my parents encouraged me to take care of my belongings,’ she says. ‘That’s stuck with me. At university I had a perfectly organised wardrobe in my student digs, and before now I always had built-in storage with mirrored doors in my bedroom. 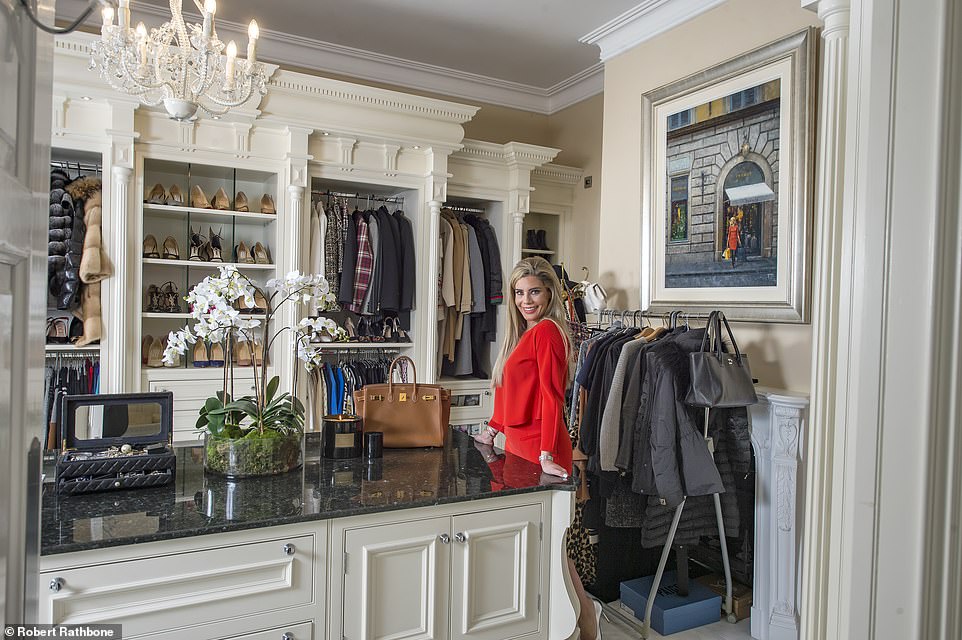 In demand: Walk-in wardrobes have become the ultimate luxurious status symbol and their popularity has soared

‘When we bought this house in 2009, it had the room to create a dedicated space, and I worked with an independent joiner to draw up the plans before he built it.

‘I wanted to be very involved with its creation because I knew what design and layout was going to be most practical for me.

‘For example, I needed high rails for my coats and evening dresses, lots of shelves for shoes, and drawer units so tops and underwear all have a place.

‘Having everything so accessible makes it very quick to choose what to wear, and also pack for business trips and holidays.’

Her favourite part of the room is the central island where she keeps her lingerie and loungewear, as well as the shelving for her designer handbag collection.

‘I own a number of Hermes Birkin bags which cost several thousand pounds each,’ Carolyn says.

‘A painting of that value would be proudly displayed on a wall, so why not a handbag?

‘To me, they are pieces of art, and I don’t want to hide them away in a cupboard – I want to enjoy them. My wardrobe lets me do that.’

‘Given that it is a space I use every day, I think it was a good investment and I’m sure it will have added value to the property.’

It’s a price increasing numbers of people – mainly women – are prepared to pay. John Osborn, of John Osborn Design, has seen a 70 per cent rise in demand for walk-in wardrobes over the past year.

‘It’s become the luxurious status symbol an en suite bathroom used to be,’ he says. ‘They’re not ostentatious or flashy, because they are usually tucked away, but for image-conscious people, spaces like these are a measure of success.’

For others, it’s simply about creating an awe-inspiring, yet useful, space they can love forever. ‘I still get goosebumps when I walk into mine,’ says 51-year-old Sarah Morgan, of the room she converted nearly two years ago. ‘Just being in it makes me feel pampered.’

Sarah and her husband John had bought the detached Georgian former farmhouse in Duffield, Derbyshire, in 2004 but undertook a major refurbishment of the upstairs space in 2017.

‘We had eight bedrooms, more than we needed,’ says the mother-of-two. ‘As part of the remodelling, we decided to turn one into a walk-in wardrobe, as part of a master suite for John and me. 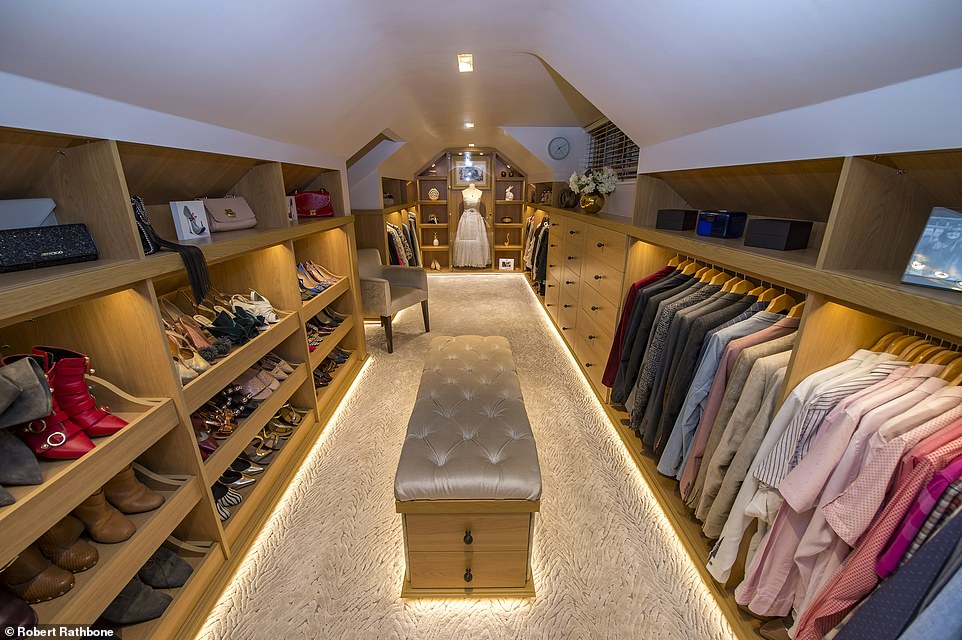 Rising demand: A 70 per cent surge in people snapping up walk-in wardrobes has been reported in just a year

‘Our bedroom was feeling cluttered with wardrobes and chests of drawers bursting at the seams, and it was the opportunity to create a dedicated space for our clothes and accessories.’ She worked with an interior designer to create a space full of mirrored wardrobes, concealed shelving and a central island with drawers. The Heritage Wardrobe Company project cost about £25,000 in total. ‘It was really important that it was a beautiful space, as well as being practical,’ says Sarah.

‘I love sitting at the island doing my hair and make-up before choosing what to wear.

‘It’s one of my favourite rooms in my home, next door to the master bedroom and en suite, and overlooking the countryside that surrounds our home.

‘Friends have visited to get inspiration, as more and more women I know are planning to do the same work to their home.’

And while we all may be wildly jealous of these sumptuous but quite unnecessary rooms, let’s admit it: which of us with the space and money wouldn’t do the same?