Snow, hail and rain are set to sweep across the country this week as Britain braces itself for freezing temperatures expected to dominate well into February.

This morning saw a huge contrast in conditions for the east and west of the UK, with the latter hitting highs of 44.6F (7C) and the former freezing at -6C (21.2F). Wintry showers will hit London and the south-east in the coming days, with sleet expected in the capital.

Today the western reaches of Scotland as well as Northern Ireland had snow and the cold is set to spread in a south-easterly direction today, sparing only the east of England, which will have bright spells throughout.

But tonight it will be close to freezing across the entire country, bringing a frosty start tomorrow, which will be wet and windy the north of England as well as the Scottish Highlands. 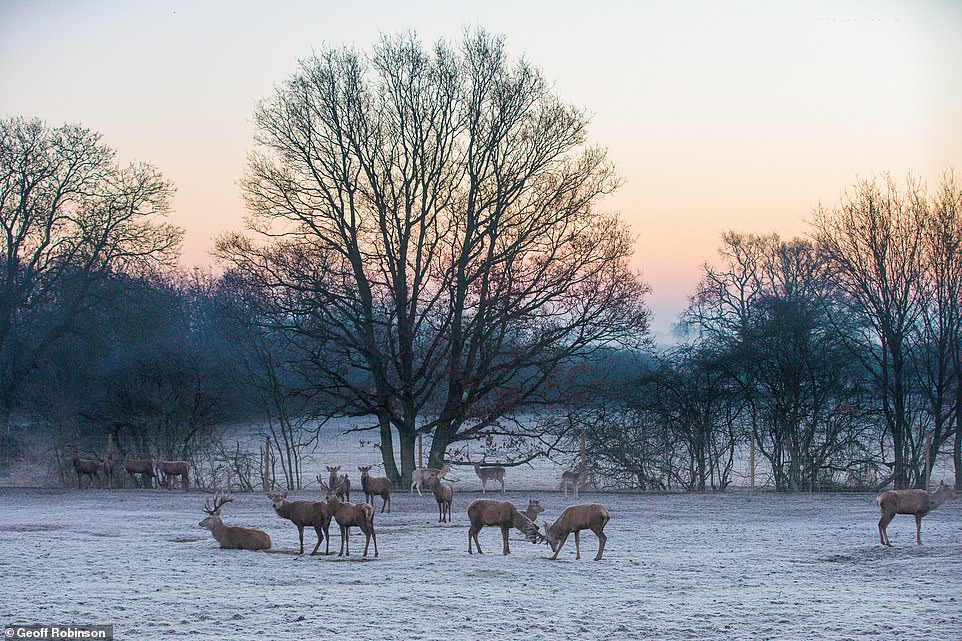 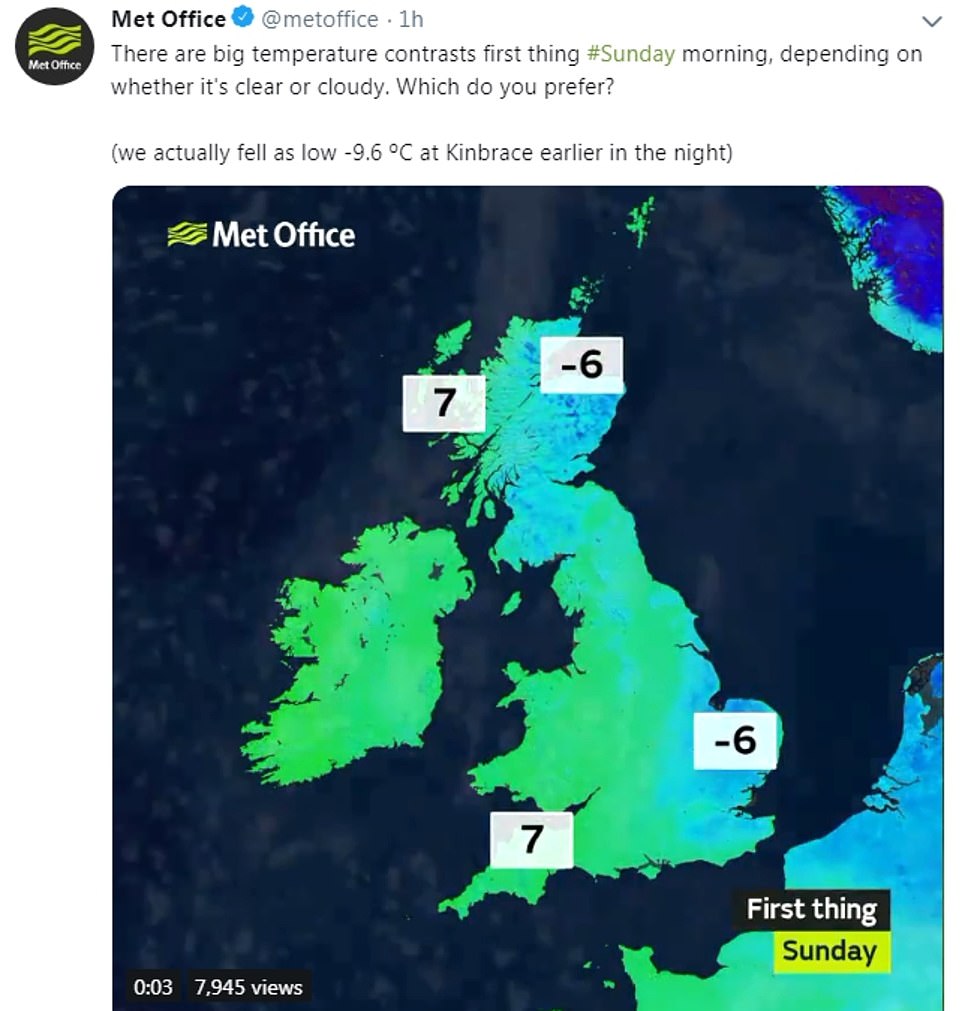 The country kicked off today with a split in temperatures across the UK, with the east plummeting to -6C and as high as 44.6F (7C) in western reaches 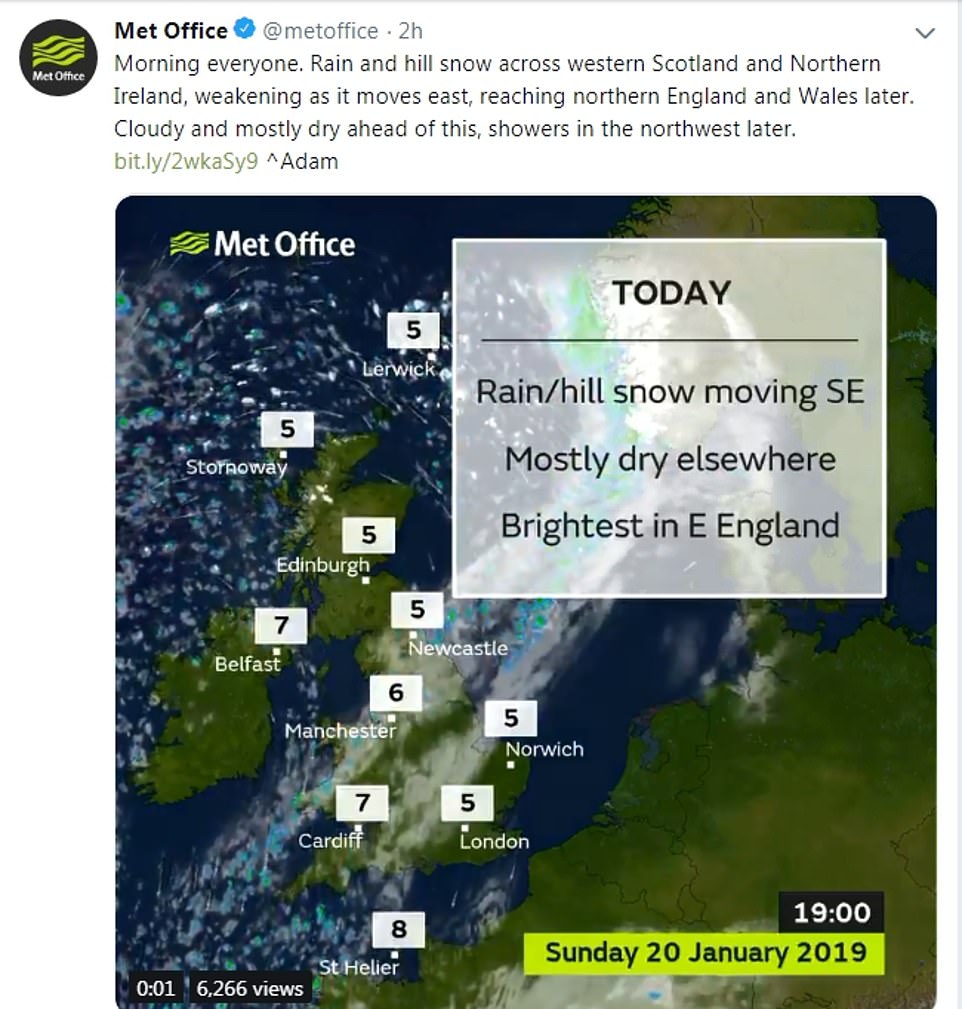 The Met Office has warned that the only portion of the country to escape today’s miserable conditions will be the east of England, which should remain dry 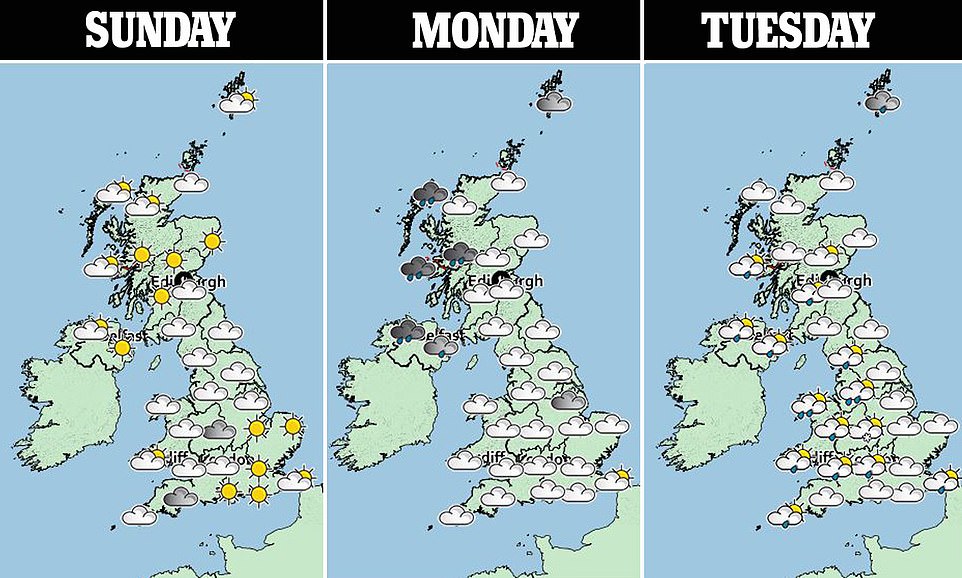 It was a frosty start in Sandringham, Norfolk, this morning (pictured) but temperatures are set to improve in the east of England throughout today before conditio ns continue to plummet later today across the country

That rain and wind will push in a south-easterly direction as we head into Tuesday, when snow is expected to hit the northern reaches of both Scotland and England.

Wintry showers on Wednesday will bring hail, sleet and snow to the north-west of the UK. Temperatures were set to plunge heading into the weekend, but the expected cold snap from the east will briefly give way to warmer conditions from the Atlantic.

Despite an overall improvement in temperatures heading into Thursday and Friday, the cold snap will materialise as January approaches its end – with lows of -10C..

The Met Office’s chief meteorologist Andy Page said: ‘On Monday and early Tuesday, a band of heavier rain, hill snow and strong winds will move quickly south across the UK, followed by wintry showers for the middle of the week. 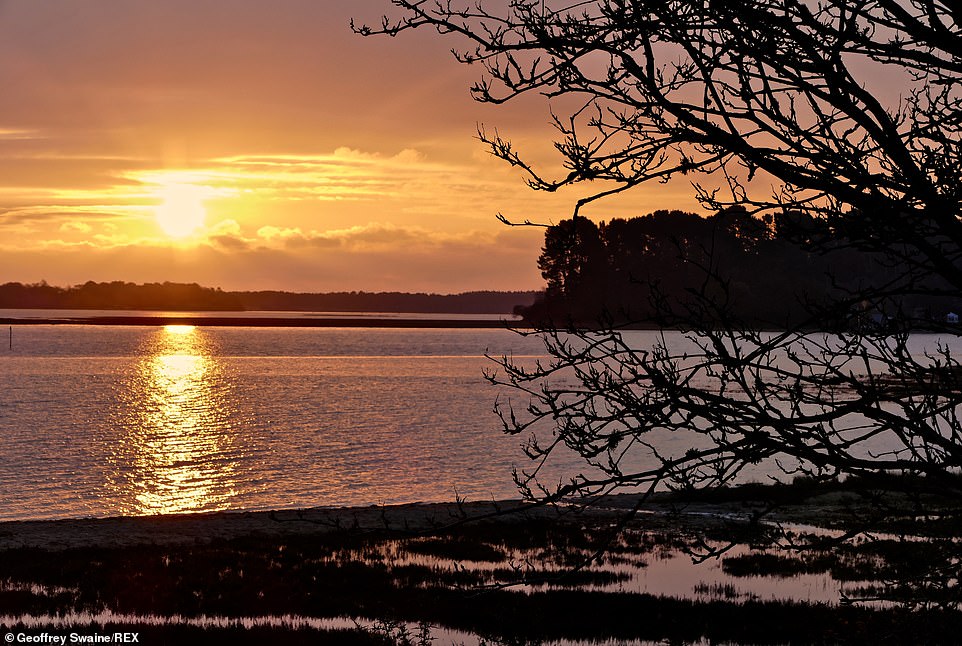 Temperatures in the western reaches of the UK were far more pleasant than the chilly east. Pictured: This morning’s sunrise at Shipstal Beach in Dorset 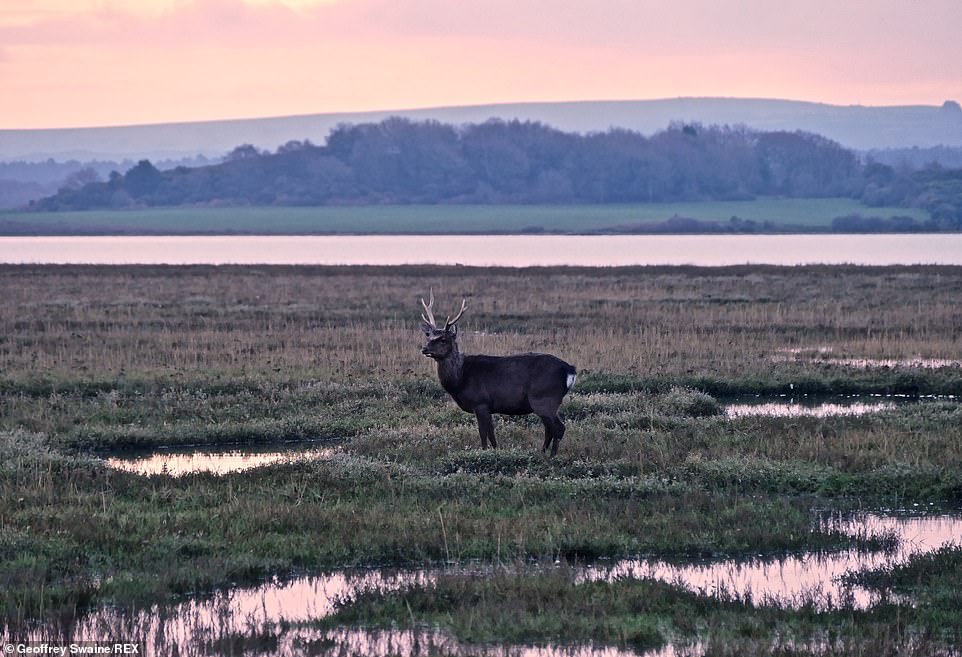 Pictured: The mild weather at first light this morning at Arne in Dorset, where temperatures and conditions will worsen throughout the day

‘Some of the showers will be heavy bringing a mixture of rain, hail, sleet and snow, most frequently across parts of the north and west.

‘There are then strong signals for a change to northeasterly winds towards the end of next week. As we go through the rest of the month and into February the longer-range outlook indicates it will remain cold and possibly very cold for a time.’

The Met Office has revealed that the country could be facing freezing temperatures which will drag on for weeks, threatening even more disruption to commuters across the UK.

In Darley Dale, Derbyshire, a Mini fell victim to the poor weather conditions yesterday and was left abandoned next to a gate covered in snow. 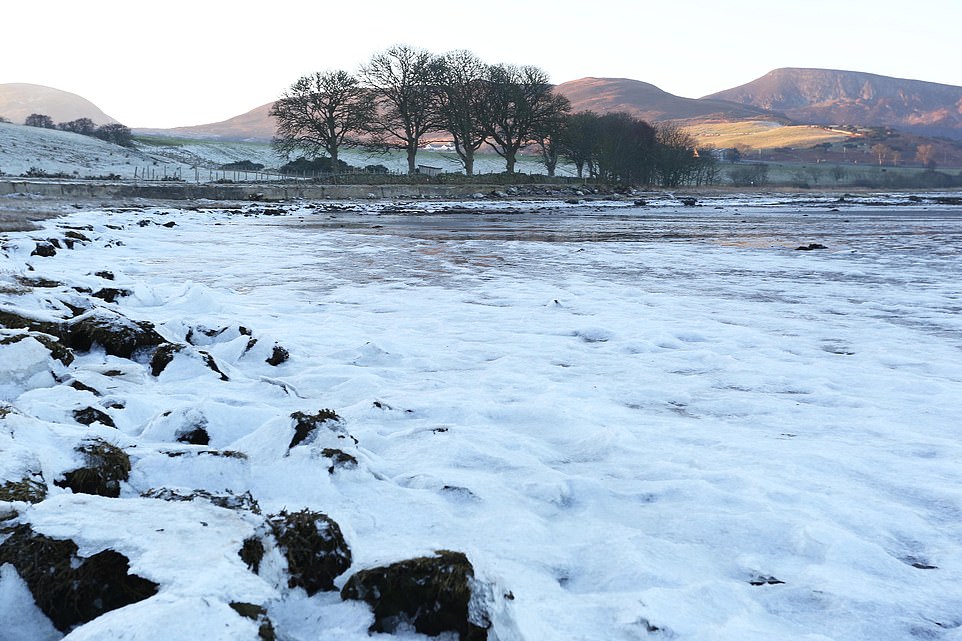 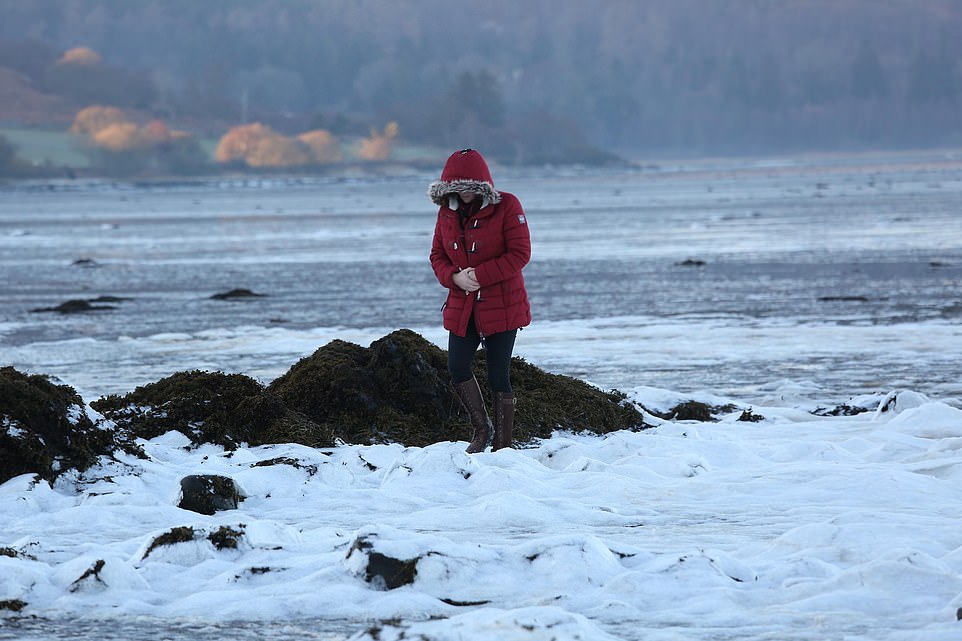 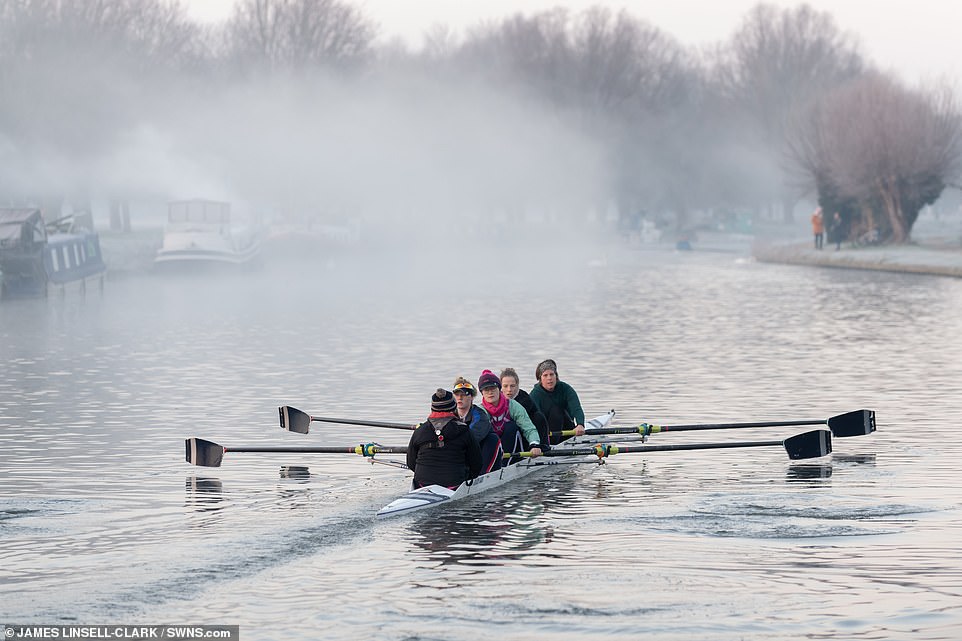 A foggy and frosty start to the day in Granchester, Cambridge, where rowers  braved the biting conditions this morning as temperatures look set to worsen in coming weeks 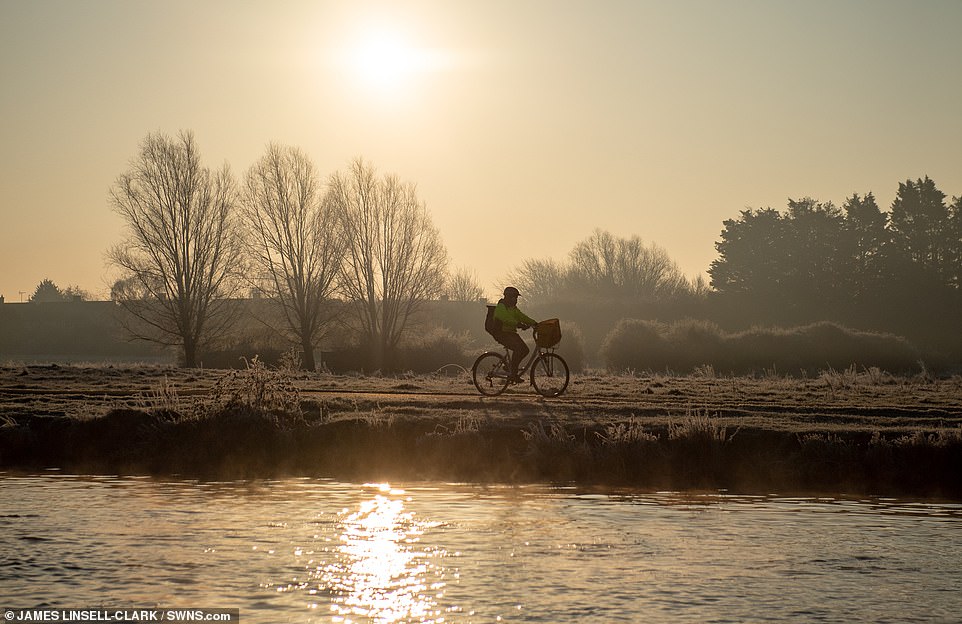 Pictured: First light at Granchester, Cambridge, where early risers were greeted by frosty temperatures and a low-hanging mist this morning

The frigid weather comes from a sudden stratospheric warming event at the end of December, causing temperatures to rapidly rise in the atmosphere, leaving open the possibility of an extended cold period.

Temperatures sunk as low as -9C (16F) in parts of northern Scotland as the weekend began, while in the South conditions hovered a few degrees above freezing.

A cold front sweeping in from the North West on Sunday morning will bring fresh dustings of hill snow for the Highlands and Grampians in Scotland, and then the Pennines in northern England and Snowdonia in Wales as it sinks south, he added.

Mr McGivern said: ‘The cold weather is here to stay for now, and there could be more significant cold and disruptive snow at times through next week. Still a lot of uncertainty, so we’re keeping a keen eye on that here at the Met Office.’

Public Health England suggested that during the cold snap, people should look in on elderly neighbours and relatives.

Dr Emer O’Connell of PHE said: ‘Experience shows us that every winter thousands of people are seriously affected and even die from illnesses linked to the cold. Protecting yourself from the cold may seem like common sense but many people do not manage to keep themselves warm

‘If you know someone at risk, someone over 65, anyone with dementia or a heart and lung condition, or a young child, check up on them and see if there’s anything you can do to help. All of us should be heating our homes to at least 18C, keeping up to date with weather forecasts and planning our days around them – simple steps can really help protect against the cold.’

Possibilities of 'no deal' Brexit are 50-50, warns Latvian minister
Alexis Sanchez fuming after being axed from Man Utd squad at West Ham
Ex-Queen bassist John Deacon is worth £105m but he's been a recluse for 30 years
Tory MPs vow to call no-confidence vote in May over Brexit plan
The Apprentice EXCLUSIVE: WINNER Sian Gabbidon chats girl power after final catty boardroom showdown
Andy Warhol soup can, unpublished James Dean photograph and letters from Charles Darwin for auction
Broadband customers will get refunds of £8 every day their service is down
The Vatican launches £85 'Click to Pray' rosary beads