Donald Trump has touched down at the Dover Air Force Base in Delaware where he saluted the transfer cases carrying the bodies of the four Americans tragically killed in a suicide bomb attack in Syria.

The president visited the base to pay tribute to the lives lost in the deadly attack that took place Wednesday in the northern Syrian town of Manbij. 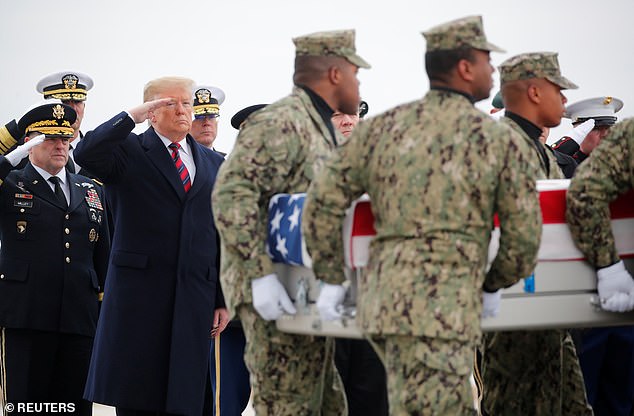 President Donald Trump saluted the military honor guard that carried the remains of Scott Wirtz, one of the four Americans killed in a bomb blast in Syria on Wednesday. He honored them at a transfer ceremony at the Dover Air Force Base in Dover, Delaware 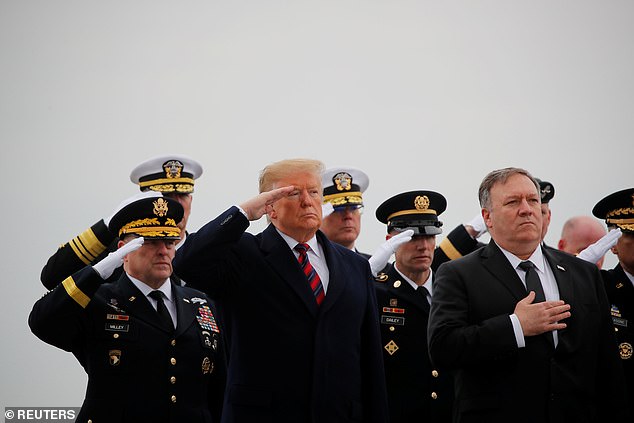 Prior to landing at the Dover Air Force base he told reporters: ‘When I’m going to meet relatives of some of our great, great heroes that have fallen, I think it might be the toughest thing I have to do as president’ 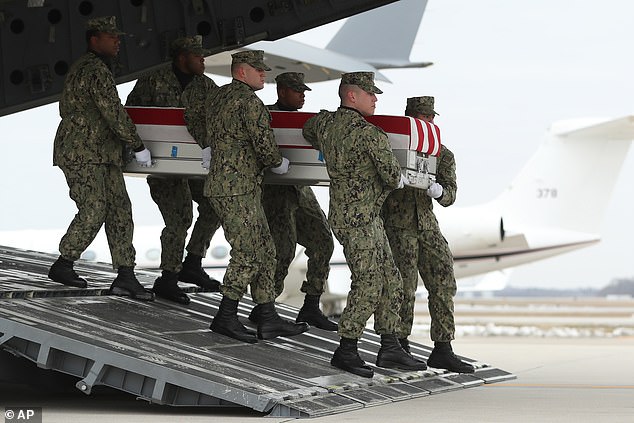 A U.S. Navy carry team moved the transfer cases of the American victims to the Dover Air Force base on Saturday, three days after the bomb blast in Syria

At least 19 people including the four Americans were killed when a suicide bomb detonated in a restaurant in the town on Wednesday, marking the deadliest assault on U.S. troops in Syria since American forces moved into the war-torn country in 2015.

She was later named as Ghadir Taher, a 27-year-old Arabic interpreter from Georgia.

Her brother confirmed her death in a statement issued by Valiant Integrated Services, the defense contractor that hired her, according to the .

‘We are extremely saddened by the tragic and senseless passing of Ghadir Taher. She was a talented and highly-respected colleague loved by many who will be dearly missed,’ a Valiant spokespersons said.

The Islamic State group has claimed responsibility for Wednesday’s attack. 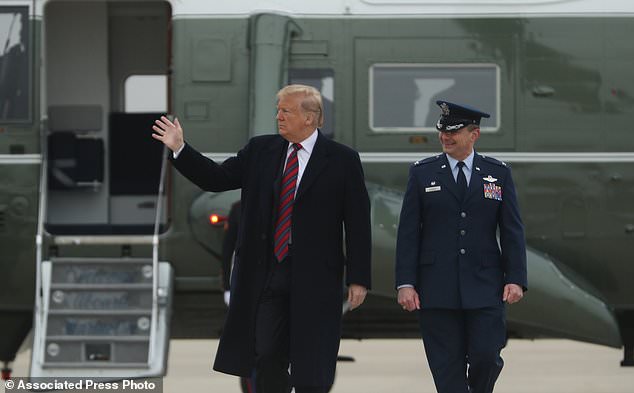 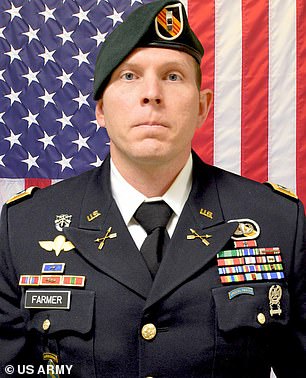 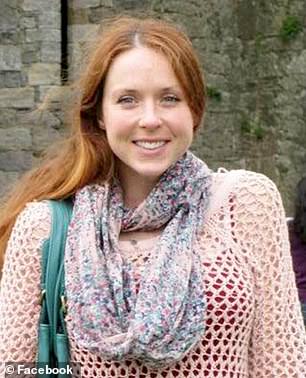 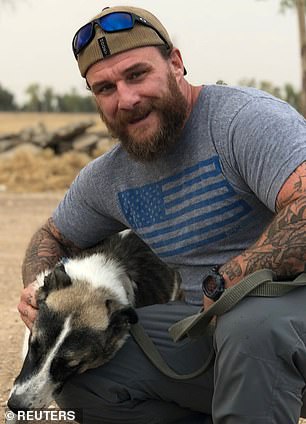 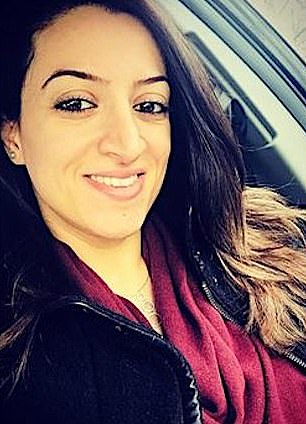 Defense Department civilian Scott A Wirtz (left) of St Louis, Missouri, was also killed in the attack.  The fourth victim is believed to be interpreter Ghadir Taher (right) of Georgia

‘I’ve always said who are we killing ISIS for? You know, the worst enemy of Russia, Iran, Syria, you look at it, is ISIS. So we’re killing ISIS for people that aren’t necessarily always in agreement with us, let’s put it that way. We have gone into Syria and in two years we have I guess reduced it to 99% of the territorial caliphate,’ he added.

‘We’ve been hitting ISIS very hard over the last three weeks … and it’s moving along very well,’ the president said on American forces on the ground in Syria.

The attack comes about a month after Trump announced that ISIS militants were defeated and he will withdraw U.S. forces from Syria.

The bomb highlighted just how strong ISIS’ grip in Syria still is and could complicate Trump’s withdrawal plan.  Some of his senior advisers have disagreed with the decision and have offered an evolving timetable for the removal of the approximately 2,000 U.S. troops.

Over the past month, Trump and others have appeared to adjust the Syria pullout timeline, and U.S. officials have suggested it will likely take several months to safely withdraw American forces from Syria.

In a December 19 tweet announcing the withdrawal, Trump had said, ‘We have defeated ISIS in Syria, my only reason for being there during the Trump Presidency.’

He said the troops would begin coming home ‘now.’

That plan triggered immediate pushback from military leaders and led to the resignation of Defense Secretary Jim Mattis.

A leading U.S. voice on foreign policy, Sen. Lindsey Graham, said during a visit Saturday to Turkey that an American withdrawal from Syria that had not been thought through would lead to ‘chaos’ and ‘an Iraq on steroids.’

Graham urged Trump not to get out without a plan and said the goal of destroying IS militants in Syria had not yet been accomplished. 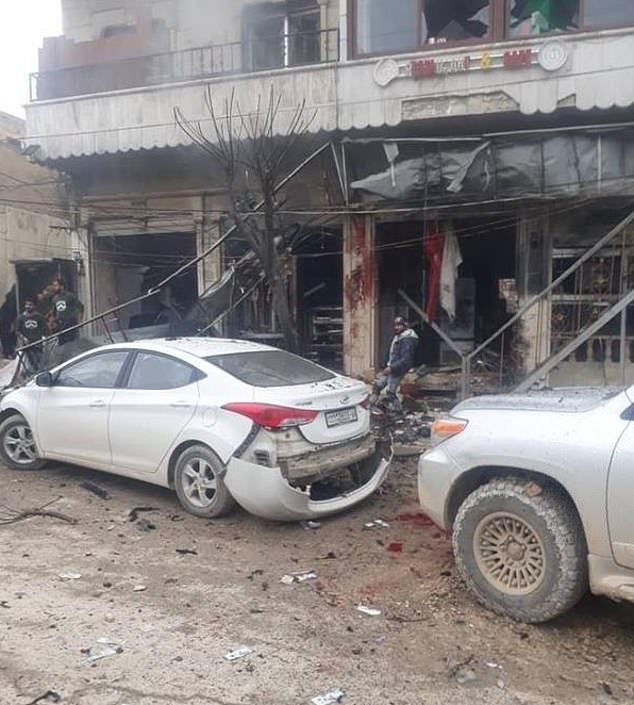 Trump will stop at the Dover Air Force Base to honor the four victims killed after a suicide bomber detonated explosives on Wednesday in Manbij, Syria 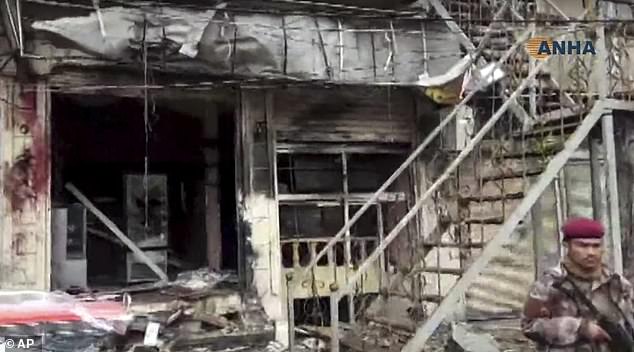 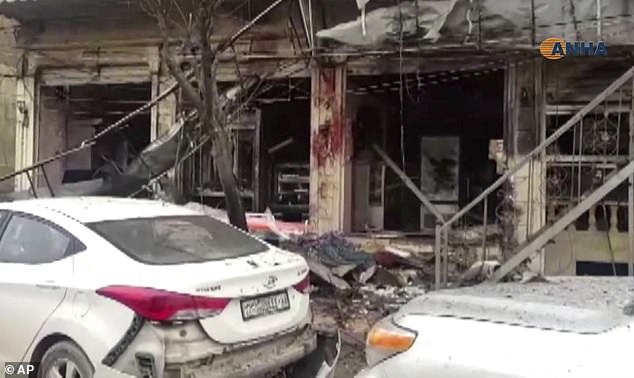 Aftermath of the deadly bomb in Manbij, Syria pictured above. It was the deadliest attack against Americans in Syria

Before Trump took off on Saturday, he briefly spoke with reporters, promising a speech at 3pm ESP on the dragging government shutdown and border control.

He also shared some warning words for Pelosi from the White House lawn who he called ‘controlled by the radical left’.

‘I hope that Speaker Pelosi can come along and realize what everybody knows, no matter who it is, they know that walls work and we need walls. And whether it is personal or not, it is not personal for me,’ he said Saturday morning.

The government has been partially shut down for 29 days now, leaving hundreds of thousands of workers without pay. 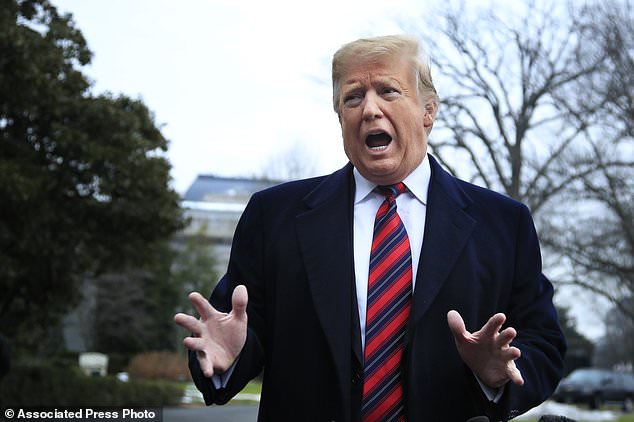 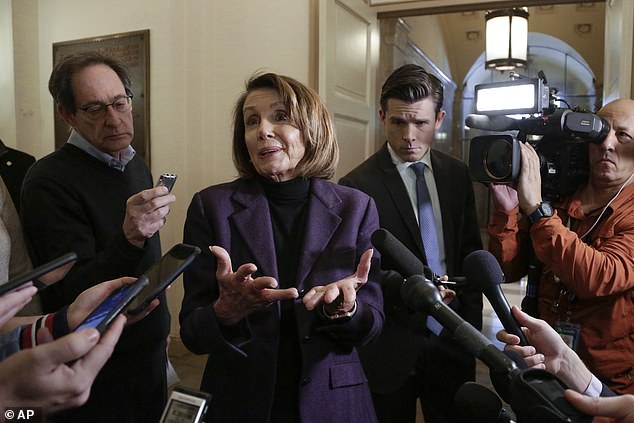 On Saturday Trump is expected to present a third spending bill proposal, as his last two have been rejected Pelosi, according to

Raising the stakes in his heated dispute with Pelosi, a Democrat from California, the president abruptly canceled her military flight on Thursday, just hours before she and a congressional delegation were scheduled to fly to Afghanistan on a previously undisclosed visit to U.S. troops.

On Friday she accused Trump of threatening her security when he publicly revealed her plans to head to Afghanistan.

‘When the Speaker of the House and about 20 others from Capitol Hill decide to book their own commercial flights to Afghanistan, the world is going to find out,’ a senior White House official said to DailyMail.com via e-mail. ‘The idea we would leak anything that would put the safety and security of any American at risk is a flat out lie.’

Trump also tweeted directly at her saying: ‘Why would Nancy Pelosi leave the Country with other Democrats on a seven day excursion when 800,000 great people are not getting paid.’

Teacher tells mum to pack less food for school - but not everyone agrees
Scientists warn using a smartphone at mealtimes can lead to an expanding waistline
Woman says she feels sexier than EVER after deciding to embrace her natural silver hair
Agony of Illinois mom who became a trigger for her 14-year-old daughter's Tourette syndrome tics
Mexico threatens to sue the US for failing to protect its citizens after El Paso mass shooting
Hillary Clinton says Donald Trump will LOSE the next election
Activists say Star Spangled Banner shouldn't be national anthem
Australian medical student Ricky Rosen, 21, goes viral with accent singing challenge