The pound has climbed against the dollar and Euro as markets react to Theresa May’s no confidence vote victory.

Sterling had been in a resilient mood during the day, holding onto gains ahead of a the Parliamentary no-confidence vote on Mr May’s Government.

The pound was trading broadly flat versus the US dollar and euro at 1.285 and 1.127 respectively, as MPs once again prepared to cast their ballot. 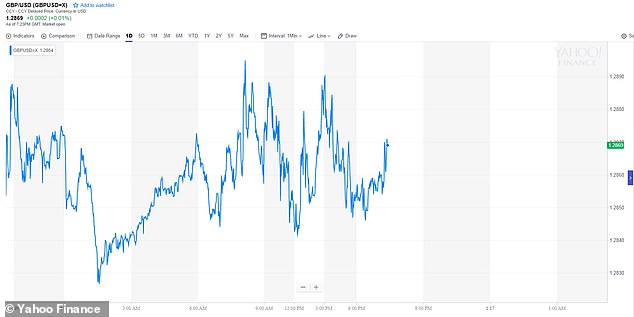 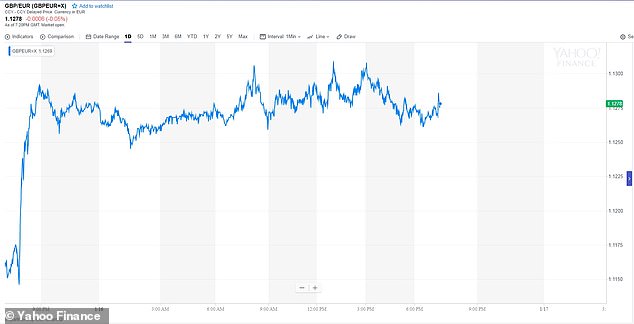 The sterling tanked to a near two-year low soon after the Government’s proposal on leaving the European Union was soundly beaten last night, but soon bounced back.

Traders bet there would not be a No Deal exit, and analysts said the positive news is that the options for the future are now narrowing in the long-running saga.

‘The deadlock is so apparent in Parliament and the result so dire that traders view the chances of a no-deal Brexit as greatly reduced.

‘Extending Article 50 and/or a softer version of Brexit, or no Brexit at all are the most viable options now, in the eyes of the market.’

Bank of England governor Mark Carney also chimed in, saying the pound’s rebound after the Commons vote signals market hope that Brexit can be delayed, but warned over further volatility. 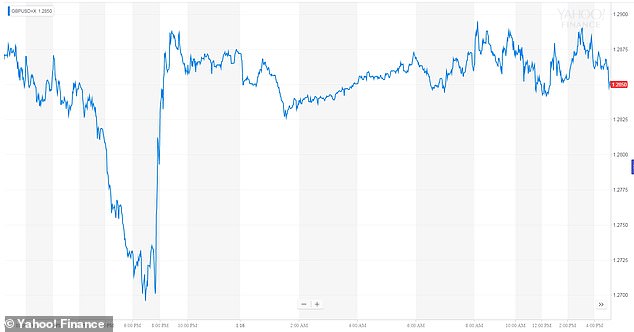 The £:$ rate over the past 24 hours. Sterling clawed back initial heavy losses overnight after yesterday’s crushing Brexit deal defeat in Parliament 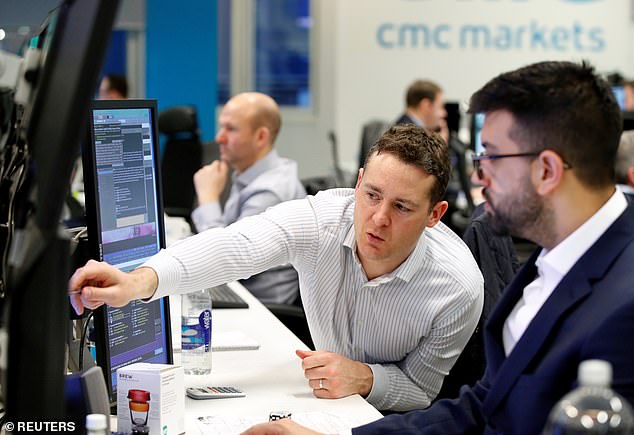 With Mrs May expected to the win a vote of no confidence called by the opposition Labour Party, talk among traders turned to what happens next.

‘Sterling spent the day acting as if it didn’t have a care in the world,’ said Connor Campbell, financial analyst at SpreadEx.

‘The currency is in for another rough night, however, as investors prepare for the no-confidence vote in Theresa May and whatever fresh Brexit hell its aftermath brings.’

Analysts say she could ask to delay Britain’s March 29 exit, while there is growing speculation of a general election and even another referendum.

Jasper Lawler, head of research at London Capital Group, said traders were hoping the Commons defeat might kick Brexit into the long grass.

He said: ‘Rather than seeing this as a step closer towards a no-deal Brexit, as Theresa May had originally threatened, traders are seeing this as a move towards extending Article 50 and delaying Brexit.

‘The perceived probability of a no-deal Brexit is diminishing, which is pound-positive.’ 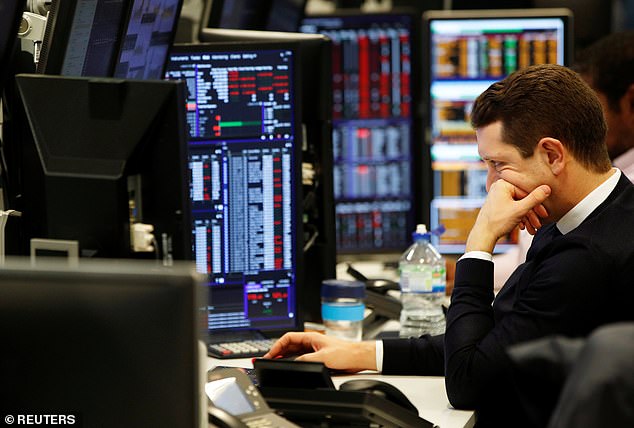 While Mr Campbell said: ‘The no-confidence motion tabled by Labour seems to have given the currency a glimmer of hope that a softer Brexit, a Brexit delay, or, whisper it, no Brexit at all, might be in the offing.’

But experts warned of further volatility ahead for the pound, even if Mrs May and the Government win Labour’s vote of no confidence. 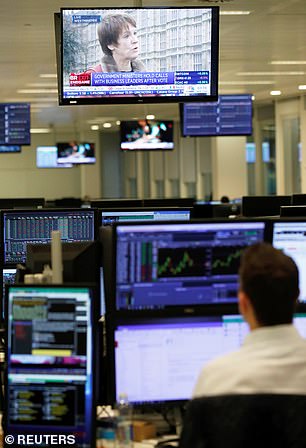 Mr Lawler added: ‘Whilst this level of uncertainty looms over UK politics and Brexit, we don’t expect the pound to push much higher.’

Gavin Friend at National Australia Bank said: ‘Momentum is shifting away from the harder Brexit route and towards a number of options ranging from postponement and second referendum.

‘That is pound supportive, (but) I don’t see the pound rallying much until markets are sure the (ruling) Conservatives have seen off the confidence motion.’

The FTSE 100 Index was also holding firm today, down four points at 6891. Meanwhile, Britain may still leave the EU without a backup.

Neil Wilson, chief market analyst at Markets.com, said: ‘We cannot ignore the fact that it takes very little effort for no-deal, whilst it takes a vast amount of effort to avoid it.’

In Brussels EU chief negotiator Michel Barnier warned ‘the risk of a No Deal has never seemed so high’. 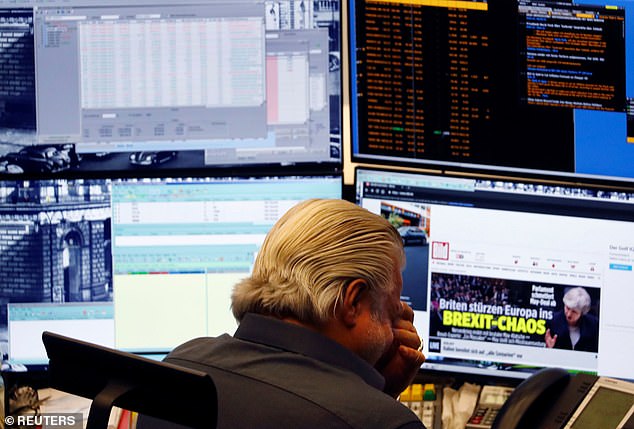 A share trader in Frankfurt, Germany, reacts as he reads the headline ‘Brexit chaos’ at the start of the trading session this morning, 12 hours after Theresa May lost her vote in Parliament

Asian equity markets mostly rose after yesterday’s rally that was fuelled by Chinese plans to cut taxes in a bid to support the stuttering economy.

However, traders are growing increasingly worried about the lack of movement in the US over the government shutdown, which is now in its fourth week, with both sides digging their heels in.

Last night, the pound recovered some of its losses after the crunch Parliamentary vote where MPs rejected Mrs May’s Brexit deal.

Sterling was trading down 0.25 per cent versus the US dollar at 1.283 and increased 0.29 per cent against the euro at 1.124 after MPs decisively rejected the Prime Minister’s Withdrawal Agreement. 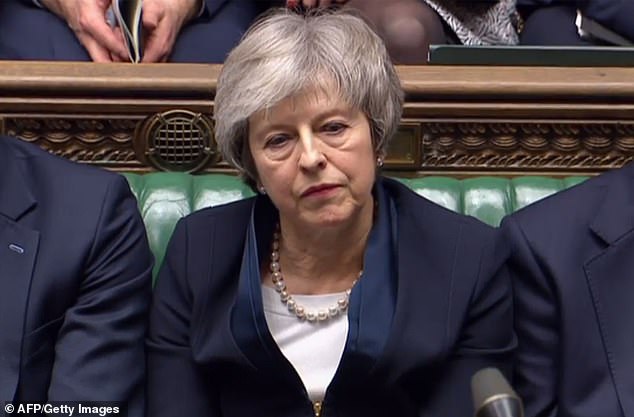 Last night, the pound recovered some of its losses after the crunch Parliamentary vote where MPs rejected Theresa May’s Brexit deal 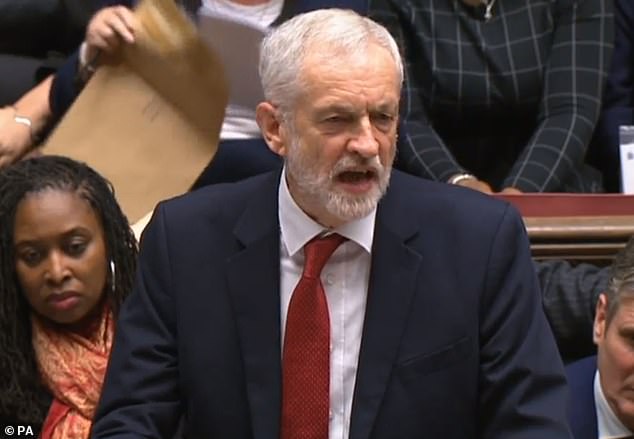 It had been feared that the pound would tank further if Parliament rejected the deal with a large majority.

MPs rejected Mrs May’s Brexit plans by an emphatic 432 votes to 202, throwing the future of her administration and the nature of the UK’s EU withdrawal into doubt.

But markets did not seem to be panicking, with the pound rising in value following the results, which were announced at around 7.40pm yesterday.

JR Zhou, Market Analyst at the online trading platform, , added: ‘The markets’ bet is that time is now on their side. With Britain lurching, empty-handed, towards the March 29th deadline, parliament may soon be forced to come together to prevent the one thing there is a majority for – stopping a painful no deal Brexit.