‘s historic Commons defeat over her deal has made the front pages across the world, with international press branding the vote ‘chaos’, ‘self-harm’ and simply ‘Brexs**t’.

In , Le Monde says Mrs May was subject to a ‘humiliating defeat’ that left the future of her Government and Brexit ‘more uncertain than ever’.

Le Figaro carried a comment on the vote by President , who said that Brits should not expect much movement on the withdrawal agreement from Brussels, adding  ‘the first losers of this are the British.’ 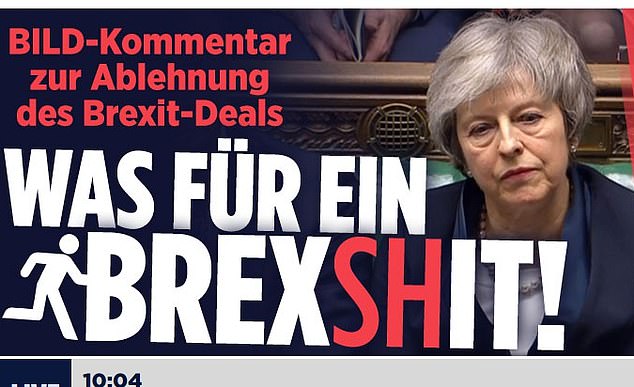 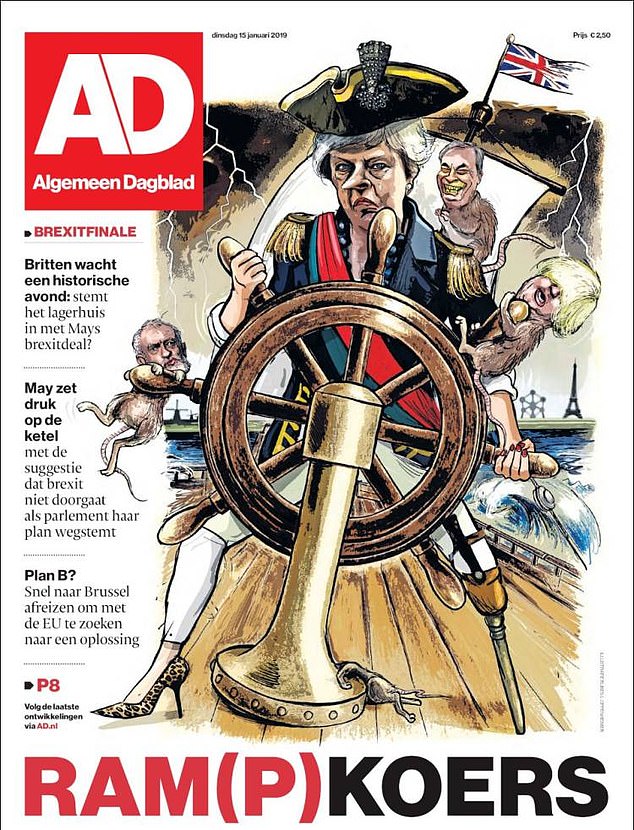 ‘Collision course’: Dutch daily Algemeen Dagblad’s front page was made up of a large cartoon of Theresa May as a captain trying to steer the UK ship through a storm, with Jeremy Corbyn, Nigel Farage and Boris Johnson as ship rats 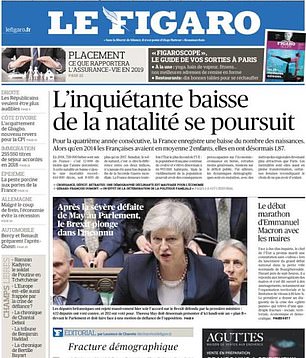 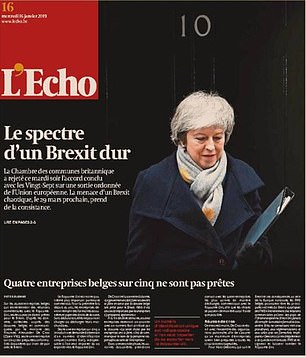 French newspapers also covered the vote, with Le Figaro including comments by President Macron, who said that ‘the first losers of this are the British’

Dutch daily Algemeen Dagblad’s front page was made up of a large cartoon of Theresa May as a captain trying to steer the UK ship through a storm, with Jeremy Corbyn, Nigel Farage and Boris Johnson as ship rats, headlined ‘collision course’.

The Prime Minister’s loss is on the front page of El Pais in Spain, which says the ‘crushing defeat’ make the ‘crisis’ over Brexit worse.

In Germany Der Spiegel says Mrs May’s Brexit plan has been ‘shattered’ and asks: ‘Must she go now?’ – while a commentator for Bild describes the situation as ‘Brexs**t’.

Mrs May was on the front page of two major Italian newspapers today, with La Repubblica declaring ‘May on the edge of the abyss’. 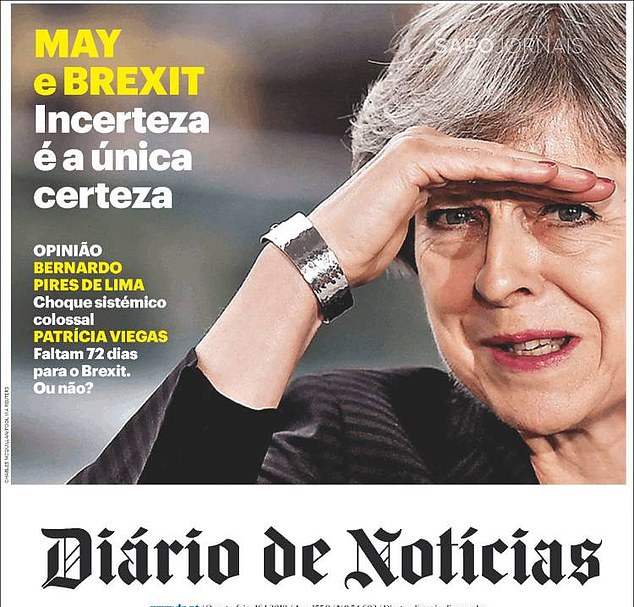 Uncertainty: Diário de Notícias, a Portuguese daily tabloid newspaper, had May looking into the distance on its front page 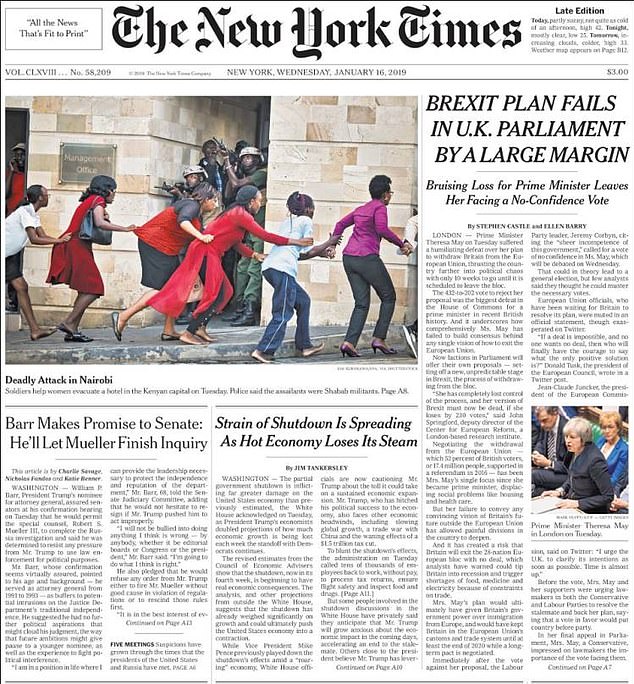 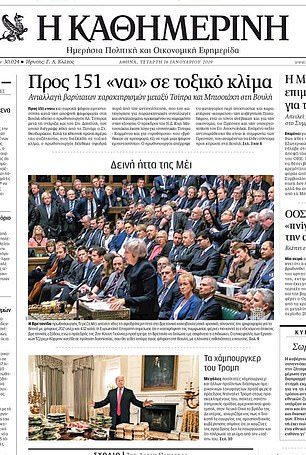 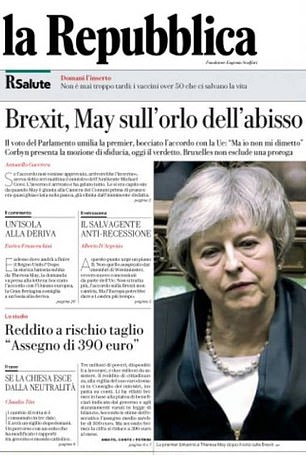 Greek and Italian newspapers also covered the vote result, with La Repubblica declaring ‘May on the edge of the abyss’ 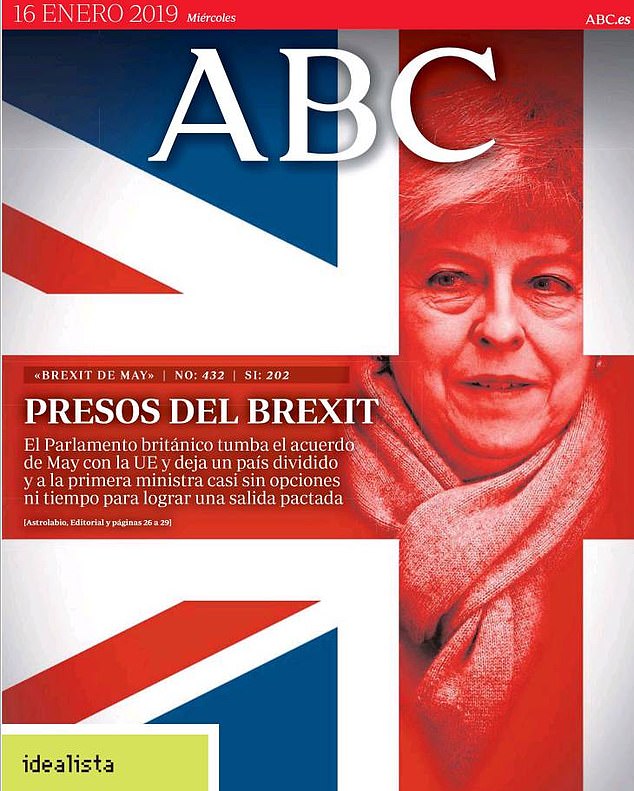 In Belgium L’Echo’s headline reads ‘The shadow of a hard Brexit’, while La Libre Belgique mulls ‘the jump into the void of the British parliament’.

Diário de Notícias, a Portuguese daily tabloid newspaper, had Mrs May looking into the distance on its front page on Wednesday.

The Brexit vote is also on the front of four papers in Sweden, the Svenska Dagbladet, which leads with Mrs May’s ‘historic loss’, and the Dagens Nyheter, which says: ‘After the historic setback – May’s fate can be decided today.’

Tabloid Aftonbladet’s expert declares that ‘what Britain is doing is self-harm’. 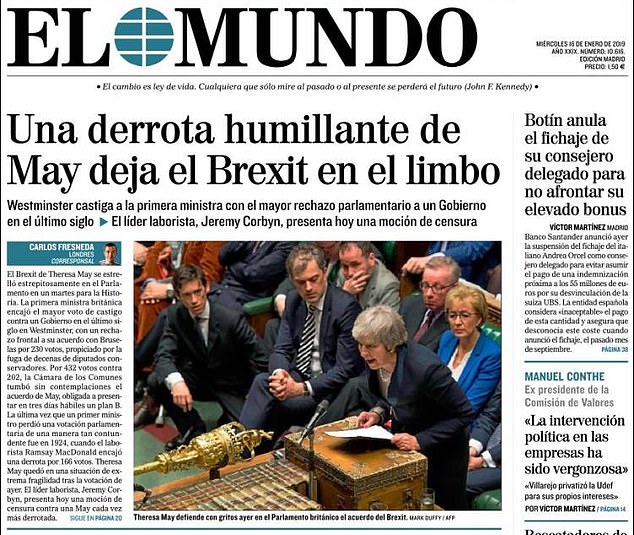 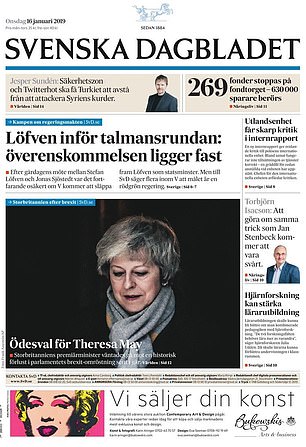 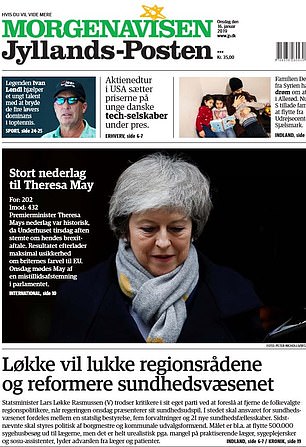 ‘Great defeat’: Scandinavian newspapers, Svenska Dagbladet in Sweden and Morgenavisen Jyllands-Posten in Denmark both chose large photos of Theresa May looking down

In Denmark the national Jyllands-Posten leads with the ‘big defeat for May’, saying it leaves Brexit facing ‘maximum insecurity’.

The New York Times describes the loss as a ‘humiliating defeat’ that has ‘thrust Britain further into political chaos’, and picked up on Mrs May’s warning before the vote that the decision will ‘set the future of our country for generations’.

The paper says: ‘Like most others, though, the prime minister had no easy answers about the way forward.’

The South China Morning Post wrote Theresa May’s Brexit deal ‘basically dead’ and like many other newspapers declared the entire process of leaving the EU to be ‘in chaos.’

Louis Vuitton unveils a $2,400 JENGA set
Family of TV meteorologist who killed herself after eye surgery speak out
Ava DuVernay says her new Netflix series will 'humanize' the Central Park Five
New York community leaders WALK OUT of closed meeting with AOC meeting after she bashed US and Trump
AOC slammed for saying millennials are 'more informed' and willing to protest than older generations
Furious backlash after it emerges Google has secretly amassed healthcare data on millions of people
Mississippi couple married for over 50 years die of coronavirus while holding hands
First court hearing for three cops charged with aiding and abetting murder in George Floyd's death