The witness, Alex Cifuentes, was a member of a Colombian drug-trafficking clan when he was sent in 2007 to live with Guzman and his associates at one of the kingpin’s hideaways in Mexico – complete with satellite TV and maid service – ‘for business reasons,’ he told jurors in federal court in Brooklyn.

Business was as robust as Guzman’s vanity: Cifuentes testified last week that his organization ended up making $40 million a month by supplying stockpiles of cocaine that the Sinaloa cartel smuggled into the United States. 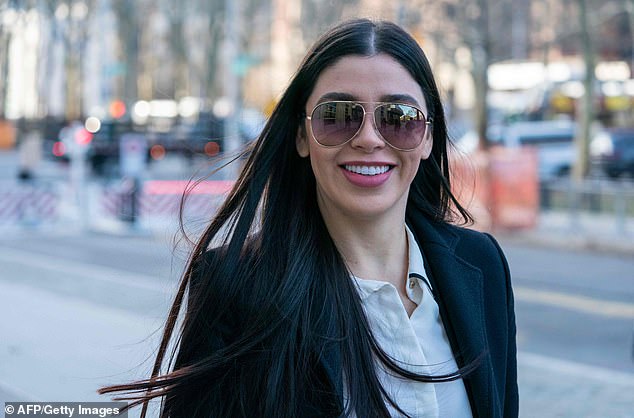 The wife of Joaquin ‘El Chapo’ Guzman, Emma Coronel Aispuro, arrives at the US Federal Courthouse in Brooklyn on January 14 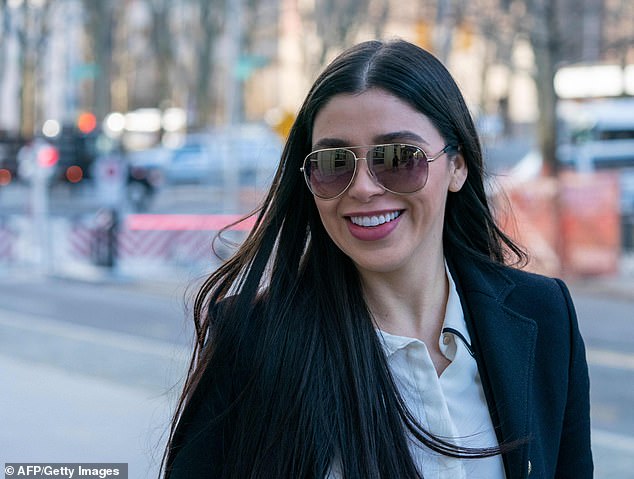 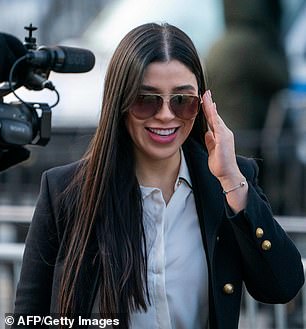 Lawyers for Guzman say Cifuentes is one of several cooperators who are framing their client in hopes of getting leniency in their own cases.

Cifuentes described Monday how when his wife suggested that Guzman should make a movie about his life as a near-mythical outlaw on the run, ‘He loved the idea.’ There were two drafts of the story written but it never made it to production, he said.

Another time, when it appeared the military was closing in on the camp, Guzman ordered his followers to grab their assault weapons and flee on foot into the darkness, the witness said. ‘We were running practically all night,’ he said before trucks arrived to take them to another one of Guzman’s half dozen hideouts in the region.

There also was testimony about Christian Rodriguez, a computer tech hired by the cartel to set up a secure communications system installed with spyware that allowed Guzman to covertly track his associates and love interests.

The kingpin ‘was really interested in what people were saying about him,’ Cifuentes said. ‘If it wasn’t pertaining to him, then he really didn’t care.’

During another conversation, Guzman informed Cifuentes that Rodriguez had given information to authorities about Cifuentes’ drug dealer brother. 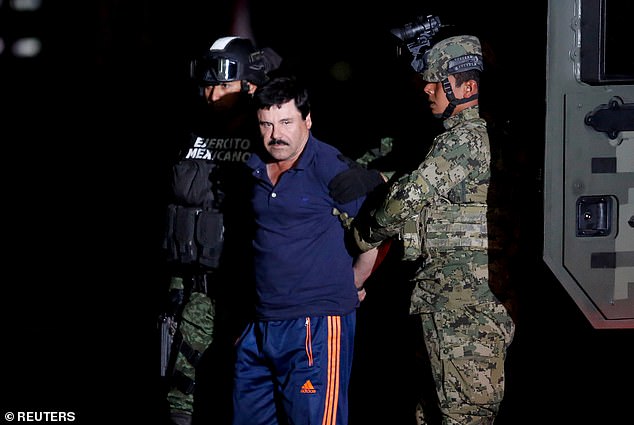 El Chapo (seen above at his arrest in 2016) case continues as he’s pleaded not guilty to a 17-count indictment, including firearms possession, murder conspiracy, and importation and distribution of cocaine 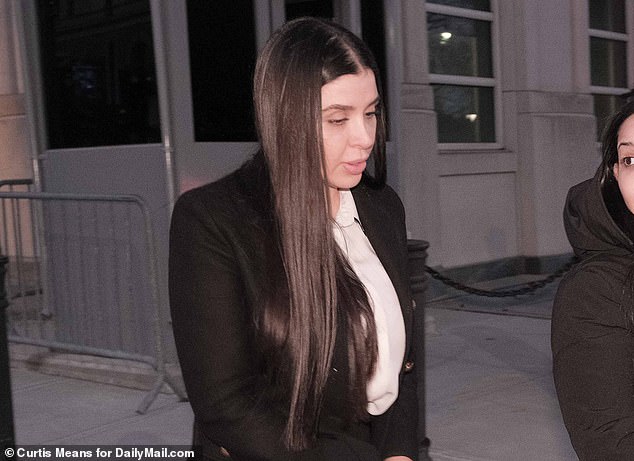 Guzman said ‘that we should look for him to kill him,’ Cifuentes testified. His response: ‘I started looking for him.’

In an intercepted phone call to his mother about his brother, Cifuentes asked her to ‘send him my regards and tell him that Christian was the one who blew the whistle.’

The hit never happened and the tech ended up helping the FBI collect scores of incriminating text messages that are a centerpiece of the prosecution.

Meanwhile, El Chapo’s case continues as he’s pleaded not guilty to a 17-count indictment, including firearms possession, murder conspiracy, and importation and distribution of cocaine.

'Effeminate' restoration of a 17th century statue leaves Colombian churchgoers angry
Jenna Dewan shows off her cleavage in plunging pink dress at Gold Meets Golden Party
Tesla slashes prices of its high-end Model S and Model X cars
Martin Scorsese's daughter launches GoFundMe to house her pets because her apartment is flooded
Hurricane Dorian death toll rises to 7 in the Bahamas after the Category 5 storm decimated islands
Kate Middleton hair style: The nineties blow dry is back for Princess Charlotte first day at school
Athlete undergoes life-changing brain surgery to remove mass that could have killed her
'As gay kid I never thought I'd have a child': Anderson Cooper welcomes son Wyatt via surrogate