We’ve been here before. When Britain stood alone in World War II, the threat of hunger and starvation was a genuine possibility.

By 1941, food imports had been halved as German U-boats sank convoys bringing meat, fruit and vegetables from the colonies.

With supplies dwindling, the Ministry of Agriculture urged people to grow their own food — a campaign called Dig For Victory.

The Dig For Victory drive was a triumph of British resilience, ingenuity and self-sufficiency in the face of great adversity

The population responded magnificently, turning back gardens into vegetable patches and erecting makeshift greenhouses to grow tomatoes. Public parks were ploughed and converted into allotments.

At the Tower of London, the lawns were dug up and given over to vegetable production. 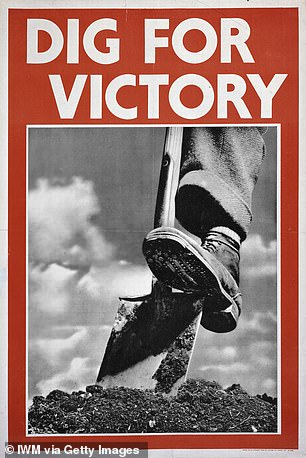 With supplies dwindling, the Ministry of Agriculture urged people to grow their own food — a campaign called Dig For Victory. A Dig For Victory poster is pictured above

The rose-beds at Buckingham Palace were used to grow onions.

The Dig For Victory drive was a triumph of British resilience, ingenuity and self-sufficiency in the face of great adversity.

Now, though, there’s a danger of it being forgotten. So the Royal Horticultural Society is appealing for any family photos of wartime vegetable gardens and examples of government propaganda posters and leaflets from the time.

Dig For Victory will be commemorated in a series of exhibitions, marking the 80th anniversary of the outbreak of war.

This could not be more timely, since we are being warned that Britain once again faces the threat of food rationing and empty supermarket shelves, ‘because of Brexit’.

The fundamental difference is that during the war, supply ships were being torpedoed to the bottom of the ocean by enemy submarines.

The greatest dangers confronting us today are a potential 15-minute customs delay at Calais, or a ten-mile tailback on the M20 in Kent (just like every other day of the week).

Yet according to the architects of Project Fear, imports of everything from Dutch tomatoes to Spanish strawberries and even vital ingredients used in the manufacture of Mars bars will dry up. 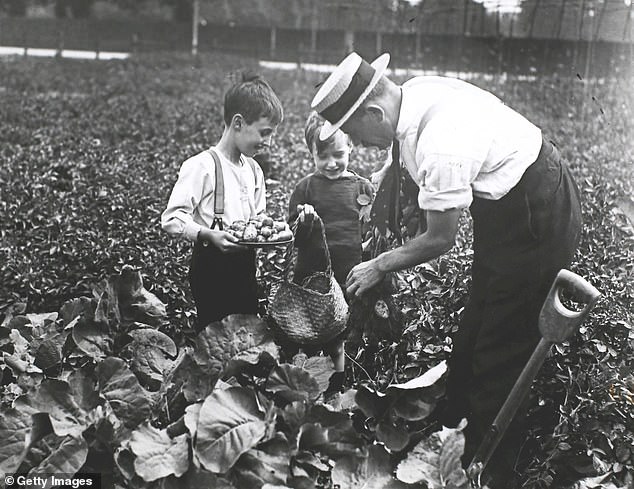 Allotments at Dulwich in the Dig For Victory campaign. Dig For Victory will be commemorated in a series of exhibitions, marking the 80th anniversary of the outbreak of war

There are widespread worries about panic buying if Britain leaves the EU with no deal in March. Petrified Remainers are already stocking up with emergency supplies.

You’d be amazed what people can’t live without these days. Parents who fear being unable to feed their children have been posting their concerns on the website Mumsnet.

Cupboards are being crammed full of bottled water, since the mains supply will obviously be horribly polluted with lethal carcinogens immediately after March 29.

I’m led to believe Fiji spring water is particularly popular, even though it retails in Waitrose at £1.49 for a litre bottle.

I wonder if Del Boy and Rodney have still got a few cases of Peckham Spring in the lock-up. If they have, they can knock it out at inflated prices to desperate Remainers.

Given the scale of the national emergency, they may even be permitted to restart production. This time next year, they really will be millionaires.

Among the other ‘essentials’ being hoarded in advance of Brexit are tricolour quinoa, couscous, avocados and mayonnaise. From what I can gather, most of our quinoa (whatever the hell that is) comes from Peru — which, last time I looked, wasn’t actually in the EU. 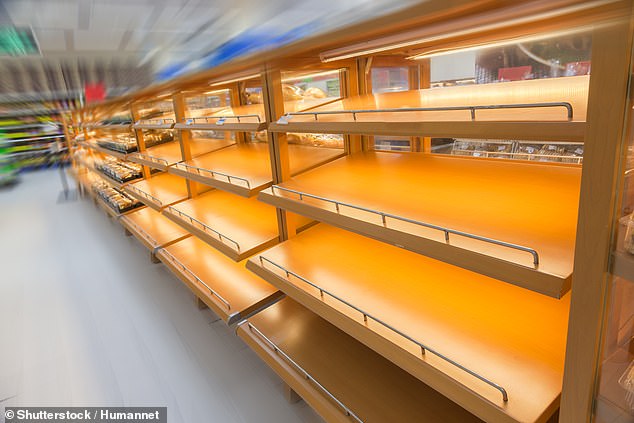 This could not be more timely, since we are being warned that Britain once again faces the threat of food rationing and empty supermarket shelves, ‘because of Brexit’ [File photo]

But why let the facts get in the way of a good panic? The hoarders have dubbed themselves the ‘48 Per Cent Preppers’ — a nod to the proportion of people who voted Remain, but also, perhaps unwittingly, to the Right-wing militia members in the U.S. who call themselves ‘Preppers’ and take to the hills to await the End of Days.

The 48 Per Cent Preppers may not be armed to the teeth, but they’re just as barking mad as red-neck American survivalists. They’re certainly as fervently evangelical about their cause.

And speaking of evangelical, by far the funniest thing I read over the weekend was a feature in the Times Magazine about young people dedicated to the extreme cult of ‘wellness’.

One of them seems to live on shakes made out of ‘coconut milk, cacao, maca, acai, blueberries and cashew butter’.

(I thought Acai was a Japanese electronics company and Maca was one of The Beatles.) He’s also a big fan of Himalayan salt.

When he’s out and about, he says: ‘I’ll try to have a shot of activated charcoal — they sell it at Pret now. We’re so blessed in Britain.’ You couldn’t make it up.

I’m only guessing, but I can’t imagine for a moment that this dedicated New Age maca-muncher voted Leave. And if Project Fear is proved right and the supply of exotic foodstuffs really does dry up, he’ll have to fall back on bacon banjos or die a horrible death from starvation within a few days of Brexit.

His only hope is that all the wood-burning stoves Michael Gove wants to ban are converted overnight to the production of activated charcoal.

So how are we to tackle the forthcoming, post-Brexit famine and pestilence? Step forward Jolly Jack Monroe, an old favourite of this column.

The celebrated non-binary Guardian food blogger, famous for her delicious Kale Pesto Pasta, has created a selection of delicious new recipes to beat the Brexit blues.

‘I live in real terror of going hungry,’ she told the Financial Times. So to keep the hunger pangs at bay, she recommends scones made out of Brussels Sprouts (will we still be able to get them when we tear ourselves away from Brussels?) and some other concoction made out of Marmite. 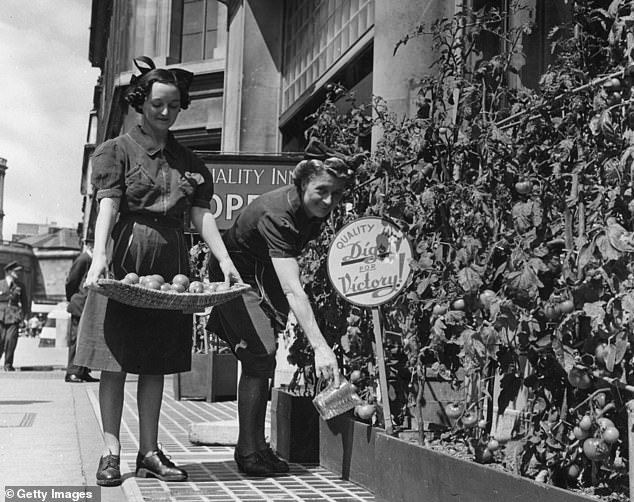 Waitresses from a restaurant in Regent Street, London, pick their own tomatoes in June 1942 grown from the side of the pavement. By 1941, food imports had been halved as German U-boats sank convoys bringing meat, fruit and vegetables from the colonies

But at least Jolly Jack is thinking practically, instead of panicking in the face of the looming acai shortage.

Maybe the Government should look to the past for inspiration and launch a new Dig For Victory campaign, fronted by Jolly Jack, Alan Titchmarsh and Nadiya, from the Great British Bake Off.

To meet modern tastes, instead of planting potatoes and growing onions, public parks could be given over to the production of tricolour quinoa and couscous.

During World War II, car factories switched to making fighter planes. Post-Brexit, they could be converted to manufacture mayonnaise.

We might even see Richard Dimbleby’s spoof spaghetti trees — from the legendary April Fool’s edition of Panorama — popping up in Hyde Park. The glasshouses at Kew Gardens could be utilised to cultivate avocados, a crucial component of every hipster’s healthy breakfast.

Who knows, the boffins may even come up with a way to grow our own Mars bars?

Where there’s a will, and all that. Let’s draw on our glorious island history, revive the Bulldog Spirit and defy the Brexit Jeremiahs.

It’s time to Dig For Victory! 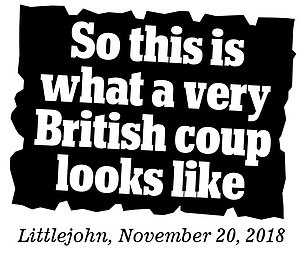 Had to chuckle when I saw the Sunday Times front-page headline ‘A Very British Coup’ above the story about the conspiracy to derail Brexit.

The expression has now been picked up as common currency by MPs and the boys in the bubble.

I wonder where they got that from, then? Modesty forbids, but they say imitation is the sincerest form, etc . . .

John Macris is among seven Greek underworld murders in Athens this year
Dozens of products like garlic bread and pesto are under threat from new calorie limits
Holly Willoughby looks chic at This Morning Live in Birmingham amid technical gaffes
Children's playground ride banned 30 years ago for being too dangerous is set for a comeback
'Fantasist Nick', 51, 'changes story to tell court Edward Heath cuddled him on his yacht'
False widow spider bite forces mother to have huge abscess removed
Headless, cat-like robot pillow wags its tail when it's stroked to reduce stress
Jeremy Corbyn refuses FIVE TIMES to say whether he wants to leave the EU