The pound recovered against the US Dollar this evening as the markets reacted to Theresa May’s Brexit plan defeat.

Sterling had earlier been trading more than 1 per cent versus the US dollar at 1.273 prior to the vote.

But soon after it was trading just 0.63 per cent as the markets responded to the vote of 202 in favour and 432 against.

As MPs prepared to vote on the Withdrawal Agreement, currency traders were awaiting more volatility, depending on the scale of the defeat and what might happen next. 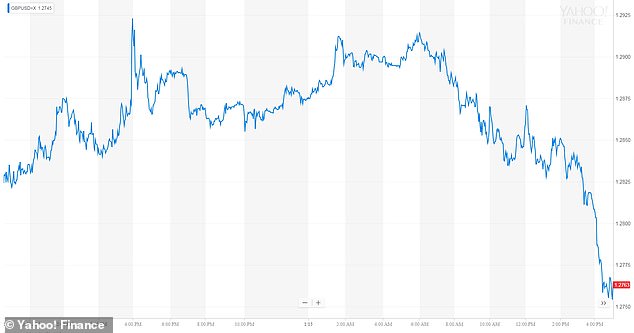 Sterling was down 0.8 per cent versus the US dollar at $1.276 prior to the vote. The last 24 hours are pictured

If Parliament rejects it with a large majority, City Index’s Fiona Cincotta believes that the pound could tank.

She said: ‘Labour (will) look to call a vote of no confidence in Theresa May, pushing for a general election.

‘Domestic political chaos, the prospect of a Labour government and on-going Brexit uncertainty would be a toxic combination for the pound, sending it back towards $1.20 and the post Brexit referendum lows.

‘An extension of Article 50 seems almost inevitable at this stage. This would offer some support to the pound as investors see the risk of a no-deal fading.

‘How the pound moves thereafter depends not only on what Plan B is, but also Labour’s reaction.’

However, the FTSE 100 ended today in positive territory off the back of higher oil prices and moves by China aimed at strengthening its slowing economy. 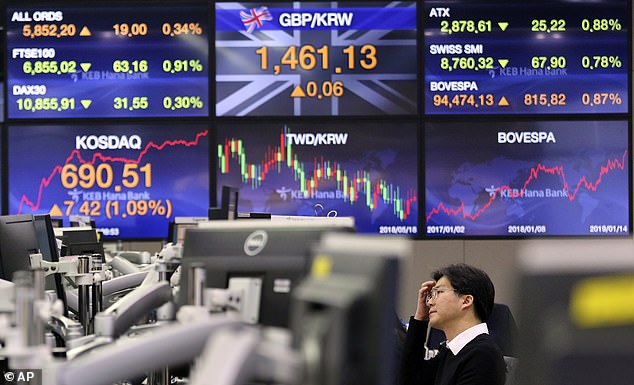 A trader looks at monitors in a foreign exchange dealing room today in Seoul, South Korea

Earlier, the pound edged fractionally higher this morning as Asian markets weighed up the next 24 hours ahead of the Prime Minister’s  deal.

What will happen to the pound after tonight’s vote in Westminster?

Number crunchers at ING have outlined a series of scenarios for the pound following the vote.

In the unlikely event that Mrs May’s deal passes, sterling will rally to $1.38, according to the bank.

If a general election is called, which is also unlikely, the pound would plummet to $1.20 and if a Norway-type arrangement is agreed, it would rise to $1.35.

A second referendum would see the British currency jump to $1.40.

However, all three latter scenarios require an extension of Article 50.

If a no deal hard Brexit comes to pass, then ING reckons sterling would tank to $1.12 and hit parity with the euro.

Sterling rose 0.3 per cent against the dollar before slightly falling back to $1.289 as markets in Hong Kong and traded ahead of the crunch vote from 7pm.

He added: ‘The question is whether the imminent disorder is fully priced.

‘It seems unlikely that the market really reflects where we are about to go on Brexit, albeit the lie of the land is more favourable for pound bulls longer term, i.e. a higher chance of a no-Brexit or very soft Brexit.

‘Extension of Article 50 seems likely if this deal fails and Jeremy Corbyn manages to force an election.

‘But similarly, the no-deal risks rise by the day with March 29 just a couple of months away. As previously argued, the either of the extremes is still the most likely outcome.’

‘There are many scenarios after that. Still I’d think the most likely outcome is to extend the (March 29) deadline of Brexit. 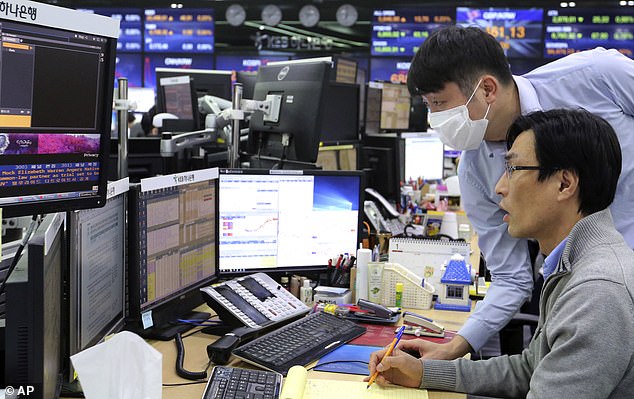 Currency option markets are barely pricing in the chances of sharp moves in sterling. The pound’s one-month implied volatility stood at 12.5 per cent.

This was above the average for the past year of 8.8 percent, and well off 20-percent plus levels seen in the days just before the EU referendum in June 2016.

Michael Hewson, chief market analyst at CMC Markets, told This Is Money: ‘The pound is set for a potentially choppy next few days.

‘It’s been suggested that if the PM loses the vote badly, which looks highly likely, she would have to step down, though it’s not immediately clear who would replace her.

‘The PM was at pains to set out yesterday that if the deal is voted down later this evening then there would be the real possibility that Brexit may well not take place.

‘The pound also appears to be trading on that basis given yesterday’s sharp move higher on a report that the Conservative Eurosceptic ERG group might vote for the deal.’