The joined schoolchildren in Islington today to make pizzas in an open air kitchen.

And while Kate certainly appeared to be a fan of the Italian staple one little girl was curious to know whether other royals enjoyed the treat.

Nadirah, eight, who studies at St Jude’s and St Paul’s Primary School asked her: ‘Has the Queen ever eaten pizza?’

But Kate admitted she had no idea, replying: ‘That’s such a good question, I don’t know. Maybe next time I see her shall I ask?’

While Kate was unsure of Her Majesty’s stance on pizza former Buckingham Palace chef Darren McGrady claims she is not a fan of the snack.

Speaking to the MailOnline he said: ‘I cooked for The Queen for eleven years and never served her pizza once. 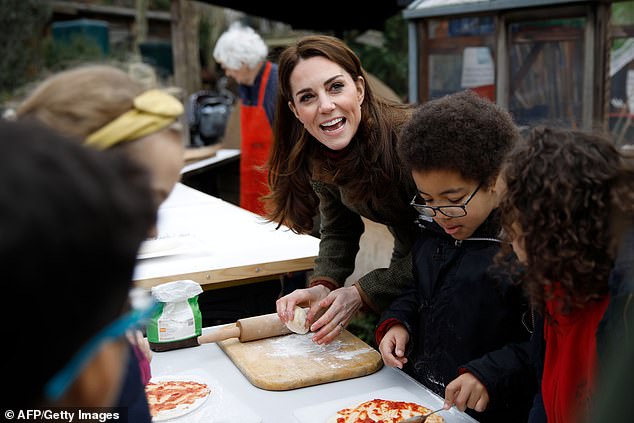 Keep cosy in a J. Crew knit like Kate

The Duchess of Cambridge dressed accordingly as she visited a community garden in Islington!

Channelling country chic vibes, the royal wrapped up warm in a coat by Dubarry teamed with jeans, See By Chloé boots and a cosy knit by J. Crew.

Christmas and New Year may be over, but the freezing weather rages on, meaning toasty layers are still the name of the game right now, and we love the luxe burgundy colour of this turtleneck top.

The great news is it’s still available to buy, so click right now to buy this royalty-approved rollneck! J. Crew has also been worn by everyone from Meghan Markle, to Diane Kruger, so you’ll be in good company.

You can also browse some burgundy beauties from the high-street below if you fancy saving a few pennies, plus complete the look with Kate’s exact coat and boots! 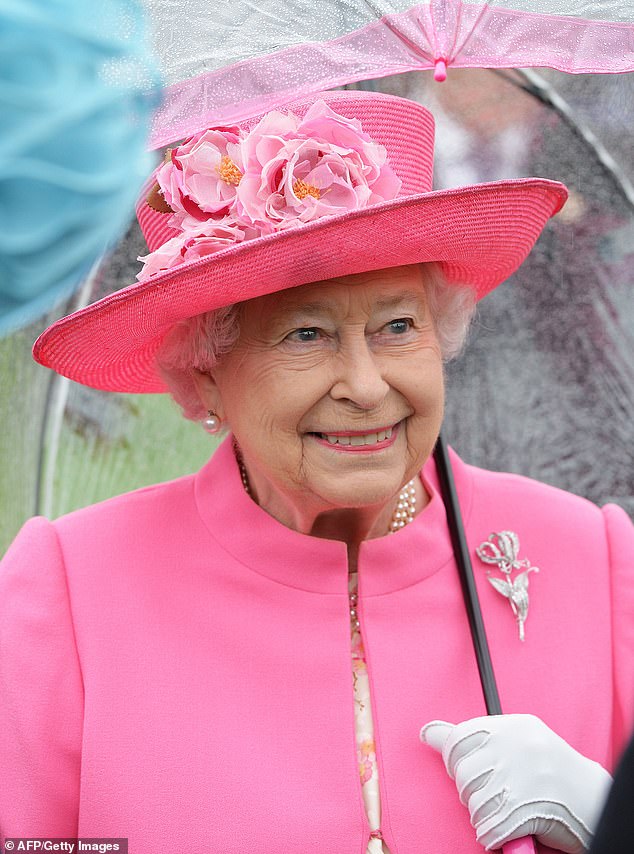 One youngster asked if the Queen ever eats pizza, and Kate admitted that she wasn’t sure

‘The Queen didn’t even have it on the menu when we were in Palermo, Sicily on HMY Britannia. The chefs had to go ashore after royal dinner to try it.’

McGrady did say, however, that two of her grandsons were huge fans.

He added: ‘I didn’t start really cooking pizzas until I moved to Kensington Palace. William and Harry would have had it every night if Nanny had let them. They loved it.’

Kate however, admitted to indulging in the treat revealing that she prefers to have bacon as a topping rather than ‘spicy pepperoni.’

She made the comments while visiting the King Henry’s Walk Garden to see how its brings members of the local community together through gardening and growing food.

While the Queen is apparently not a fan of pizza Her Majesty’s more unusual eating habits have let slip over the years.

McGrady said the monarch loves dark chocolate, refuses to have garlic in her meals, and sometimes even eats out of Tupperware. 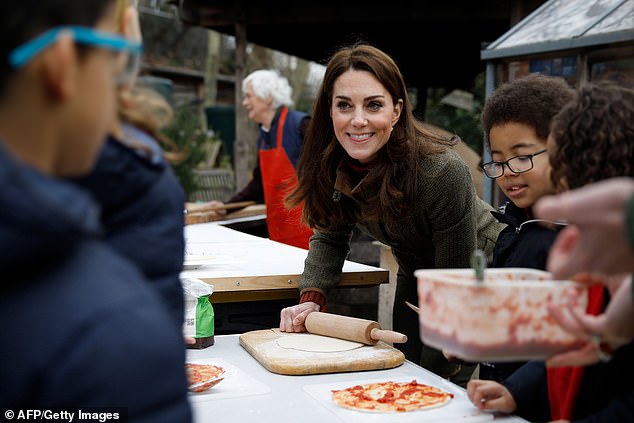 Kate however, admitted to indulging in the treat revealing that she prefers to have bacon as a topping rather than ‘spicy pepperoni’ Some of the Queen’s more unusual eating habits have previously been shared including eating cereal from a tupperwear containner. Pictured: The monarch at a state dinner with King Felipe VI of Spain

Describing the Queen’s eating habits, he told : ‘Breakfast was very simple for Her Majesty.

‘Some Kellogg’s cereal from a plastic container, which she’d serve herself. And some Darjeeling tea.’

He also revealed how dark chocolate was the monarch’s ‘favourite’ – but said she could not stand to have garlic in her meals because she ‘hated the smell of it’, as well as the taste.

While most would imagine that the Queen always eats off the finest crockery, the chef said that she would occasionally eat from a ‘plastic yellow Tupperware container.’ 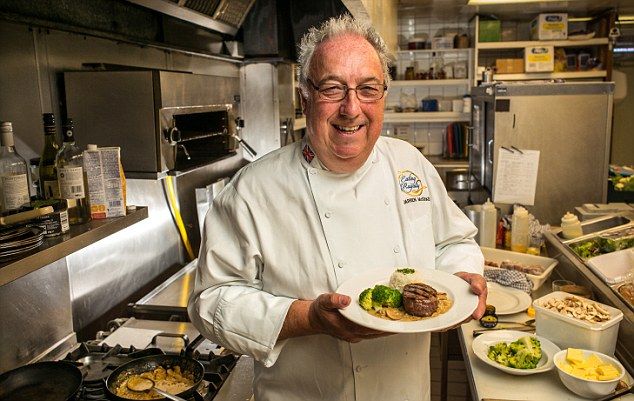 Mr McGrady, who now runs his own catering company, has previously revealed how the Queen would be presented with a ‘menu book’, which was sent to her two or three times a week for the coming days.

Speaking in an interview with FEMAIL, he said: ‘The menu book was sent up to her and she’d put a line through the ones she didn’t want

Explaining how the monarch played an even bigger parts in state banquets, he said: ‘She’d oversee the full menu, choose what she wanted – do we have enough pheasant, grouse, partridge?

‘She loved food from the estate and to see her own produce on the menu.’

He added: ‘She loved the hosting side of the event. Garden parties were huge we’d have to do so much food, scones and pastries, ice cream made fresh. ‘

Duchess Sophie Württemberg marries French Count Maximilien d'Andigné
Defending the world from terror: Fascinating pictures show anti-terror police in action
Deaf puppy finds the perfect home as he is adopted by a deaf man who teaches him sign language
Slain firefighter's widow, 32, is charged with capital murder after 'evidence she killed for money'
Photo shows woman, 46, leaning over baby she's accused of ripping from mom's womb at hospital
Stunning photo shows the moment a Japanese probe swoops 30 FEET above an asteroid
Water Mission co-founder has drowned in a 'tragic accident' during a family trip to the Bahamas
Crown Princess Mary of Denmark wears $55 Elise Gug blouse for first public event after isolation