Witnesses who looked on in horror as a young mother pushing a pram died crossing the road when she was hit by a car have revealed her last frantic screams of ‘where’s my baby?’

The unnamed woman, in her 20s, was with her eight-month-old son when they were struck by the vehicle in Penge, south London at about 8pm.

Paramedics raced to the scene, but the mother was pronounced dead on arrival while her young son was left with life-threatening injuries.

Images from the scene showed a broken pram and a handbag in the middle of the road and a large number of vehicles from the police, fire and ambulance services.

A neighbour who lives close to the crash site told MailOnline: ‘Her last words were screams of “where’s my baby? Where’s my baby?” 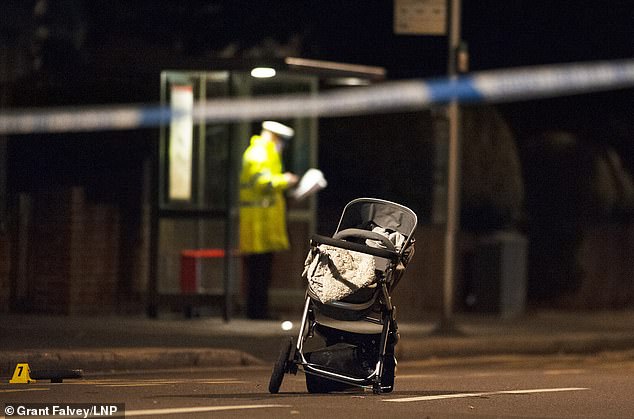 The pram is pictured at the scene of the crash in Anerley near Penge, south London last night 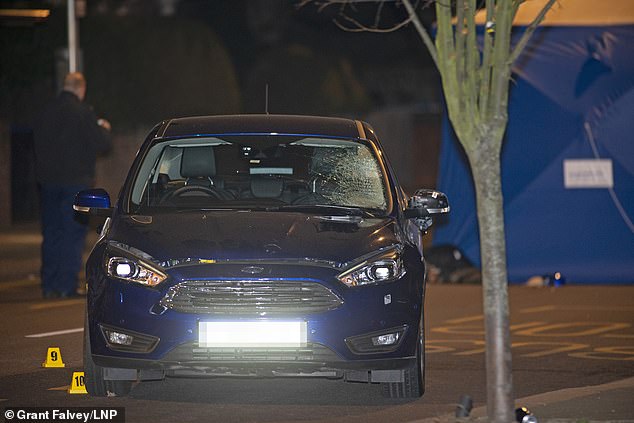 This car showed damage on the passenger’s front side as police combed the scene for evidence. A driver who was taken to hospital is helping police with their inquiries

‘That was just after the emergency services arrived. But they kept her in the same spot, so I knew that she was unlikely to survive.

‘I’d heard shouting and arguing at first and I thought it was neighbours rowing.

‘When I looked outside a passer-by was holding the baby to stop the car or the driver moving from the point of impact.

‘The driver was a man with a young child aged around five-years old. Cars speed down that road all the time so I wouldn’t be surprised if he’d been going too fast at the time.

‘It took about 15 minutes for the ambulance to show up. When they arrived they gave her a drip but kept her there. Hearing her final screams was so upsetting.’

Officers added that the driver of the vehicle that hit the pair stopped at the scene and was later taken to hospital with non life-threatening injuries.

The eyewitness added: ‘I know her locally. She’s a fun, outgoing party girl who likes to be with her family and friends. She was only 23.

‘Her parents turned up at the scene straight after. Her dad stormed off but her mum stayed there. 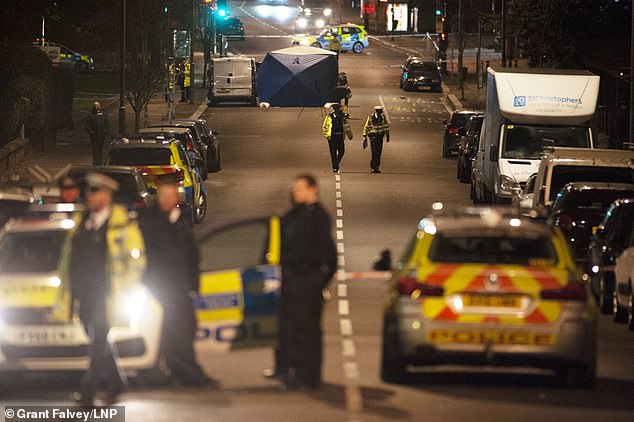 When paramedics arrived at the scene on Croydon Road at around 8.08pm, the mother had already died

‘I believe that they’re a close-knit family. I can’t imagine how they’ll all cope.

‘Another neighbour thinks that she might have had a row with her partner just before the accident. They wondered whether she might have been upset as a result.’

A local woman who lives nearby added: ‘The woman is a friend of a friend’s girlfriend.

‘The baby is their son. He is eight months old. He is in an on-off condition at the moment and they are not sure if he will live.

‘I am really shaken up. People are always speeding on this road and they need to do something about it.

‘I can hear them revving their engines from the top of the hill. There needs to be more speed cameras.’

She added that although her neighbours lived opposite to where the crash happened she did not think anyone had seen it from their window.

She said: ‘She took a real hit, her handbag flew off in one direction and broke and the buggy flew off in another.’ 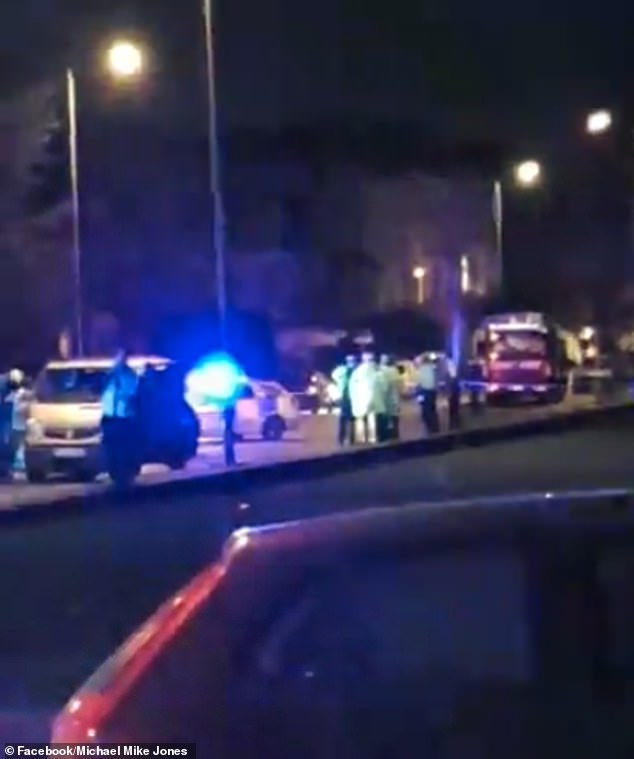 The incident took place in Anerley, near Penge last night and when paramedics arrived at the scene on Croydon Road at around 8.08 pm, the mother had already died 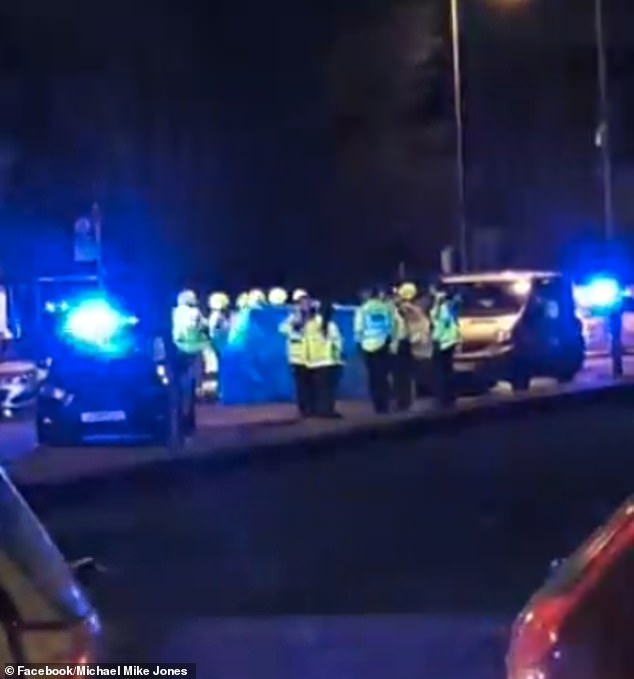 A newsagent also said the woman was local but he did not know her by name.

He said: ‘I saw people looking at something on the road but I didn’t see what happened.’

Another man who lives in a block opposite the scene laid flowers by a lamp post.

He said he did not see the accident but his neighbour had been at the bus stop last night and saw it happen.

He said: ‘He saw everything, he spoke to a reporter about it last night.’

The driver is also helping officers with their inquiries.

In all, around 12 emergency service vehicles responded to the call and the road remains closed.

A spokesman for the Metropolitan Police said last night: ‘A car was found to have been involved in a collision with a mother and a baby in a pram. 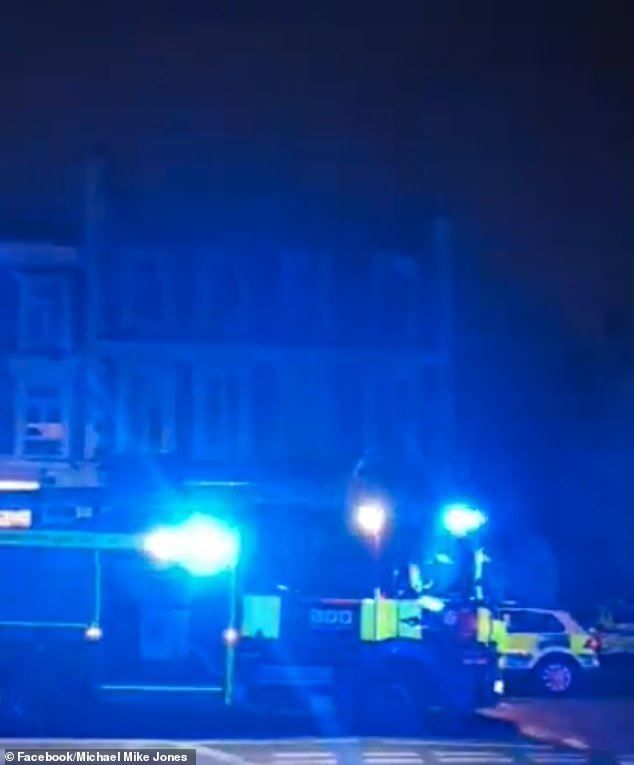 In all, around 12 emergency service vehicles responded to the call and the road remains closed

‘Despite the efforts of officers and paramedics, the mother, believed to be in her 20s, was declared dead at the scene

‘The baby has been taken to hospital. His injuries have been assessed as life-threatening.

‘Road closures have been put in place.

‘The driver of the car, who stopped at the scene, has been taken to hospital. His injuries are non life-threatening.’

Bromley Police asked people to avoid the area, and closed the road to carry out their investigation.

One witness of the aftermath of the incident described the scene in a video on Facebook.

‘Boy what a sad start for 2019. (I was) just passing, going about my business and I came across such a horrific accident. A car hit a babymother while she was trying to cross the road. 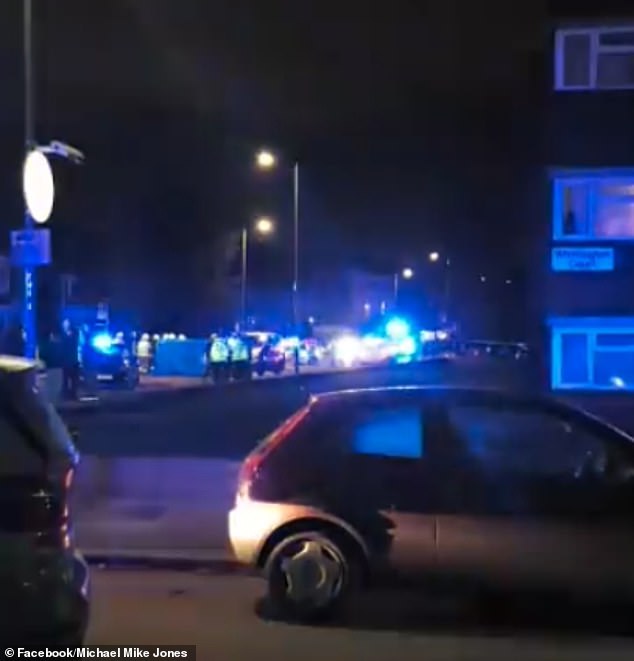 When emergency services arrived the mother had already died, according to police