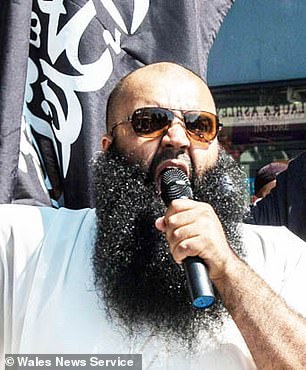 A former postman who ‘inspired young men to join ISIS’ has been spared prison despite admitting to spreading terrorist propaganda after posting YouTube videos featuring a banned cleric.

Sajid Idris, from Cardiff, was sentenced to 21 months in jail – suspended for two years – after the judge said there had been a delay in prosecuting him and there was a ‘realistic prospect of rehabilitation’.

Paul Dodgson said the videos had ‘no accompanying graphic images’ and the ‘exhortations to violence’ were made ‘in the context of the publication of the religious beliefs’.

The two-and-a-half year delay between Idris’ initial arrest and bringing charges was ‘far beyond that to be expected in this sort of case,’ the judge added, and provided ‘substantial mitigation’.

‘The authorities at that time clearly considered you to be at no great risk to the public,’ the judge said.

‘I cannot be satisfied that you pose a present danger to the public and indeed the matters referred to tend to show that you are not a danger.’

The judge said Idris’s family circumstances in recent years had been ‘of a tragic nature’ and added: ‘There is a realistic prospect of rehabilitation, and immediate custody would have a significant harmful effect upon your daughter who has already been through considerable distress.’

However, he said the videos were a ‘direct call to arms using religion as a basis to argue that there is an obligation to join the fight in Syria’.

The video ‘glorifies violence and introduces a justification of fighting and dying,’ the judge said.

‘There is no doubt when one looks at the contents that you and those like you were at that time inciting others within our country to perform acts of violence for terrorist purposes,’ he added.

‘You lived in our society and yet it was a society which you were encouraging others to fight and obliterate.’

Idris, who had been silently praying during the proceedings, blew his cheeks out in relief in the dock and then hugged bearded supporters outside court who had stayed out of the public gallery.

He promoted Salafi Islamist militant Omar Bakri Mohammad, who was banned from Britain after leaving in the wake of the 7/7 bombings, on the platform.

Idris was said to be the leader of the radical group al-Muhajiroun (ALM) in the Welsh capital and to have influenced a number of young men from the city who joined ISIS. 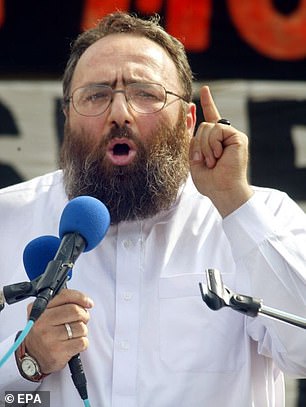 Charges against his wife, Sadia Malik, a primary school special needs co-ordinator, were left on file, after Idris entered his plea. A marriage certificate for the couple bore the signature of Islamist preacher Anjem Choudary.

The channels he used to promote Mohammad were called OBMLive, OmarBakriOnline, SheikhOmarBakri, and Omar Bakri Muhammad.

He admitted to offences carried out between November 1 2013 and December 4 2014 but was linked to extremism as early as 2010, when two members of his group were accused of planning to blow up the London Stock Exchange.

Gurukanth Desai, 30, and his brother Abdul Miah, 25, from Ninian Park in Cardiff were under surveillance as they met with the other members of the group from London and Stoke in Roath Park, Cardiff and Cwmcarn Country Park near Newport.

At first they talked about sending mail bombs through the Royal Mail and then decided on a plan to set off bombs in the toilets of the Stock Exchange.

Idris went on to post a video called ‘Support the Muslims of Syria,’ in March 2012, which said Muslims should demand an ‘Islamic solution’ to problems in the Middle East and offer ‘physical’ support.

In the 14-minute video he addressed the people of Syria, saying: ‘Our money is with you and, if need be and if we are able to, our Muslims will come and respond to your call physically as well.

‘So we call upon the Muslims to be steadfast in this struggle, to call for sharia, to call for an Islamic solution… to continue rising up against [these] regimes, whether that be in Tunisia, in Syria, in Egypt, even in Saudi Arabia, even in Yemen. The Muslims in Jordan need to rise up and we the Muslims will respond to your call.’

He hit out at Western involvement in the region, adding: ‘We are not here to call upon freedom, to call for democracy, to call for human rights. Remember these words are very establishments, these are the very causes of the oppression that has taken place in these Muslim lands.’

In March 2013, the Home Office put Cardiff, which has a Muslim population of around 30,000, on a ‘high priority’ list for combating extremism activity. 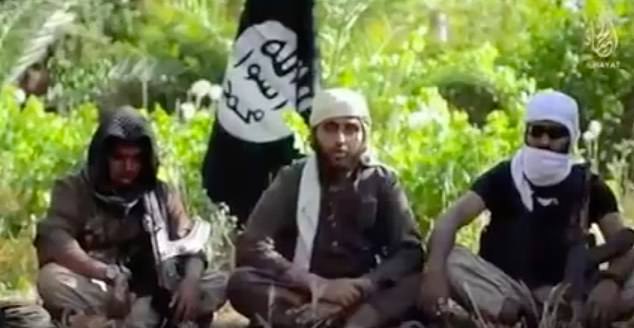 The former postal worker is said to have inspired a generation of people to go and join ISIS (pictured, some of the group’s fighters) with his online activity

Idris, from Grangetown, Cardiff, had become a notorious figure among Muslims in the city.

Two of his followers appeared in an ISIS recruitment video in June 2014 in which they proclaimed their desire to die as martyrs.

Nasser Muthana and Reyaad Khan, both 20, appeared in a video called ‘There is no Life without Jihad’, along with a third man, Abdul Raqib Amin, from Aberdeen.

In the propaganda video, Khan told his audience: ‘Know that if it’s your family, your wife, these people who you claim to love, if you really love them, martyrdom is what you do for them.’

Their local mosque blamed online radicalisation for the young men’s decision to travel to Syria but the pair actually joined established extremists in the Cardiff.

Before they left the city, Muthana and Khan were regularly seen handing out leaflets alongside other members of the Supporters of Tawheed.

Muthana had been joined by his younger brother, Aseel, then 17, in February 2014, helped by three other men, including a convert called Kristen Brekke, who met him when they both worked at an ice cream parlour at the end of Brekke’s street called Ice cream Passion.

Idris was also linked to the terrorists who murdered soldier Lee Rigby in Woolwich, south-east London.

During searches of his home in 2014, police found receipts for special delivery items sent to killer Michael Adebolajo.

Idris was first arrested alongside a number of others for membership of a proscribed organisation named al-Ghurabaa in November 2015 but prosecutors decided there was no realistic prospect of conviction.

Khan was killed in a controversial RAF drone strike a little over a year later, in September 2015.

In October 2016, Damon Smith, an autistic university student from Devon who had spoken to Idris at a street stall in Bristol, planted a homemade ball-bearing bomb on a Jubilee Line tube train in central London

Smith was handed a leaflet titled: ‘What’s your purpose in life?’ and posed for a picture with the preacher who invited him to go to a mosque with him, although it is unclear whether Smith took him up on the offer.

Smith, 20, had not converted to Islam, but police believe that he became influenced by radicals and he had viewed images of the radical preachers Anjem Choudary and Abu Hamza, as well as al-Qaeda leader Osama bin Laden.

Saunders, a convert, was accused of possessing editions two, three, four and five, of the ISIS magazine, Rumiyah and a copy of the Anarchist Cookbook which were found on his phone.

The second edition of the magazine focused on the use of a knife to carry out a lone wolf-style terrorist attack included what type of knife to buy and how to choose a target. 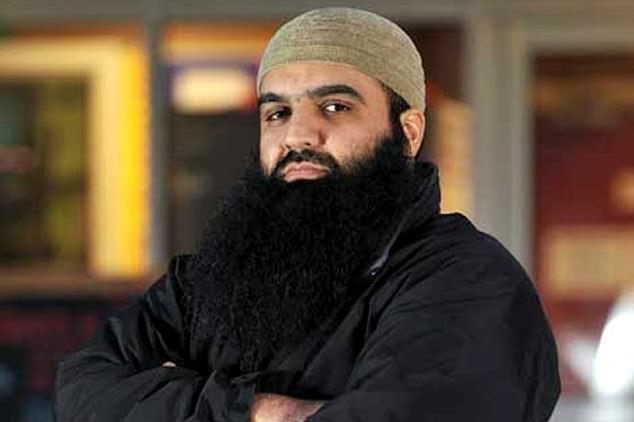 It was accompanied by an online video which showed how to disembowel and kill a bound and gagged victim.

July 2017 before Idris was re-arrested for his YouTube posts, police found two versions of an Islamic marriage contract between Idris and his wife Malik, one of which was signed by Anjem Choudary.

On a hard drive, police found a graphic with the words: ‘Let the East and the West know: we are terrorists. We terrorise the enemies of Islam’ and another graphic of a black Islamic flag with a rifle and the words ‘Support our Troops.’

Idris also had documents headed: ‘The Islamic ruling with regards to killing women and children in jihad’ by Abdullah Azzam and ‘The Islamic legitimacy of the martyrdom operations’ by Nida’ul Islam.

They did suggest there could be a prospect of charges for other offences but it was not until July 2017 that Idris was re-arrested for the YouTube posts.

Idris who worked at the Penarth Road sorting office in Cardiff, was suspended on full pay by the Royal Mail.

Anjem Choudary, the national leader of al-Muhajiroun, was jailed in September 2016, and released on licence last year, after posting videos on YouTube encouraging support for ISIS.

TripAdvisor names best B&Bs and hotels in Travellers' Choice Awards
Pregnant Meghan and Harry WON'T follow royal precedent and hire a nanny
Great-grandfather, 82, is one of the first to have an artificial ankle made from BULLETPROOF VESTS
Body found in search for 'shy' missing teenager, 18, who disappeared on A-Level results day
Baby dies after being thrown off a bridge in Greater Manchester
Florist behind Princess Eugenie's wedding blooms reveals his tips for the perfect bouquet
UK coronavirus death toll increases by 209 from 1,019 to 1,228
Killer who stabbed his teenage victim, 17, to death is living in a hotel at the taxpayers' expense