EU leaders are preparing to delay until July or possibly longer if Parliament cannot agree a deal, it has been claimed.

Brussels is reportedly expecting the British government to ask for an extension to Article 50, allowing more time to get a deal through Parliament.

Mrs May is expected to lose Commons the vote on her withdrawal deal on Tuesday, raising the prospect of a no-deal departure on March 29.

Brexit could be postponed even longer if a general election or second referendum takes place, the reported. 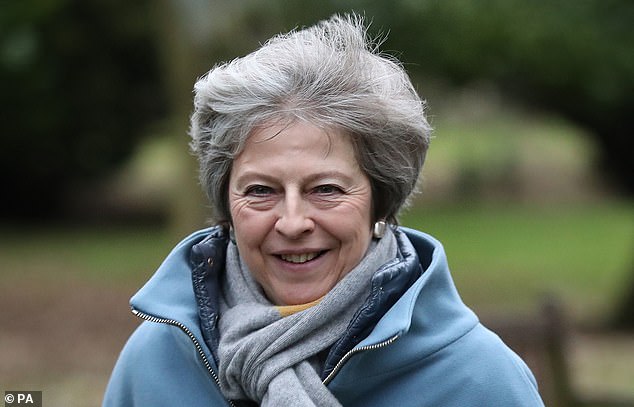 EU leaders could delay Brexit past March 29 to give Theresa May, pictured outside church today, more time to get a withdrawal deal through Parliament

An EU source told the newspaper: ‘Should the prime minister survive and inform us that she needs more time to win round parliament to a deal, a technical extension up to July will be offered.’

EU leaders could reportedly agree to delay Brexit at a leaders’ summit organised by Donald Tusk.

Should the EU not agree to a postponing of Brexit then the UK would leave the EU without a deal on March 29.

A longer extension could clash with the European Parliament elections scheduled for May.

Britain is currently not expected to take part in the elections and will no longer have any MEPs.

But if Britain were still in the union when the new European Parliament meets in July then the UK could be expected to provide members.

Mrs May is facing a heavy defeat on Tuesday as Conservative backbenchers prepare to unite with Labour to vote the deal down. 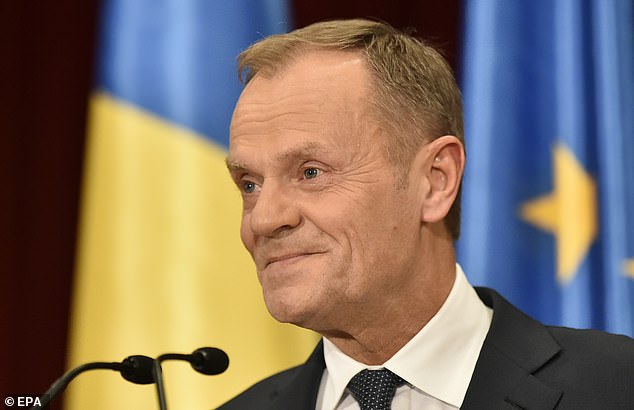 EU leaders could agree to delay Brexit at a leaders’ summit organised by Donald Tusk, pictured, although a long extension could clash with European Parliament elections

Brussels is preparing to offer fresh assurances over the Irish backstop, which Tory rebels fear could leave Britain tied to the EU’s trading rules indefinitely.

Meanwhile Mrs May warned of a ‘catastrophic and unforgivable breach of trust’ in democracy if Brexit is stopped.

One of her predecessors, Sir John Major, called for Article 50 to be revoked as he warned it would be ‘morally reprehensible’ to crash out without a deal.

‘When you turned out to vote in the referendum, you did so because you wanted your voice to be heard,’ she said.

‘Some of you put your trust in the political process for the first time in decades. We cannot – and must not – let you down.

Labour is also facing calls to put forward a vote of no confidence in Mrs May and a general election could take place should the Government lose.

Thousands of rowdy footy fans give their team a heroes’ welcome after incredible AFL victory
You can afford a new kitchen for Christmas!
David Beckham faces being hauled into court
Mother claims she took her daughter to the GP FIVE TIMES before she was diagnosed with leukaemia
More than 7,000 headteachers warn of a 'school funding crisis'
Irish writer calls for the haka to be BANNED saying it gives New Zealand All Blacks an advantage
Hessy the humpback whale who swam into the Thames may be stuck there for a WEEK
Extinction Rebellion eco-mob threaten chaos for travellers at London City airport