It is a conundrum that has stumped even the finest Hollywood casting directors – how to make a movie about a dumb blonde for the #MeToo generation. And perhaps it’s no surprise that, for all the beautiful, impossibly proportioned actresses in Tinseltown, none has been willing to take the role of Barbie in a major new Hollywood film. Until now.

Step forward , and a new-look Barbie who, according to insiders, is about to make one of the most unlikely transformations in the history of plastic dolls, from airhead to feminist icon.

According to a source within Mattel, the toy-maker responsible for creating the doll and new film in development, Robbie’s interpretation will have an ‘edge’. 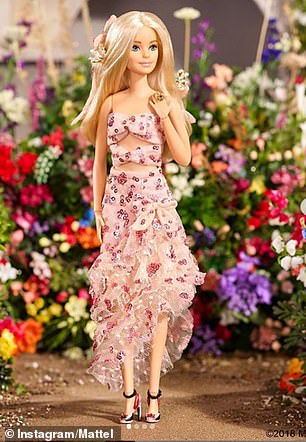 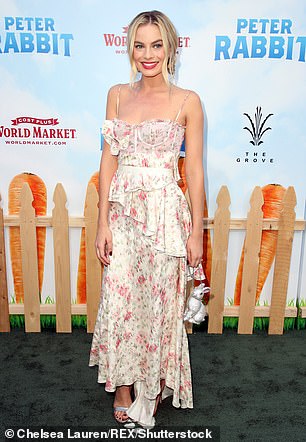 ‘She’s someone who is relatable to both men and women. She’s whip-smart and a feminist. That’s what Mattel is looking for,’ said the source. ‘Barbie has been attacked over the years for being an unrealistic model for girls, for being focused on fashion and being beautiful.

‘Mattel has been desperately trying to change her image. The new film will have a traditional-looking Barbie with distinctly untraditional views. It is all about making her relatable in a modern world.

Flight of fancy: Tailored power suits for Robbie (right) in TV’s Pan Am and 1966 flight attendant Pan Am Barbie (left) 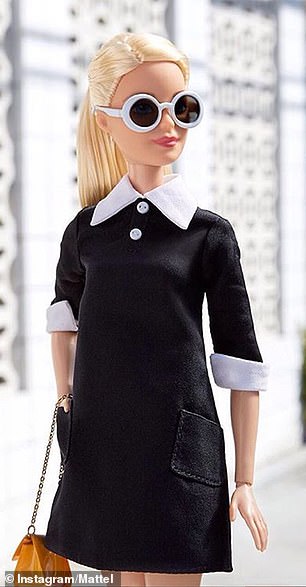 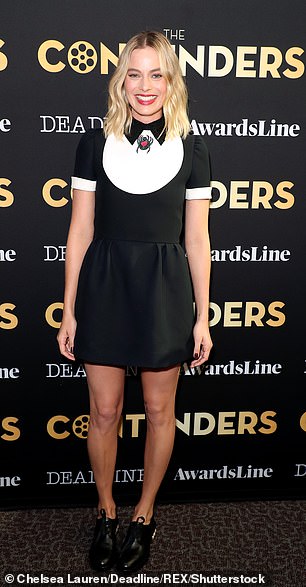 ‘Margot is a feminist. The new script empowers Barbie and has a lot of humour. People will be surprised.’

They certainly will. Indeed, just getting 28-year-old Robbie, one of Hollywood’s brightest young actresses, on board has been something of a coup.

The Australian-born star made her name opposite Leonardo DiCaprio in The Wolf Of Wall Street and was Oscar-nominated for her role as controversial US figure skater Tonya Harding in I, Tonya. 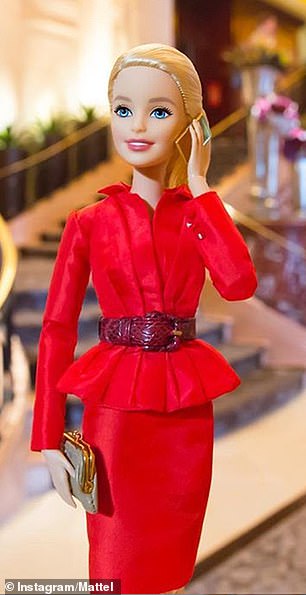 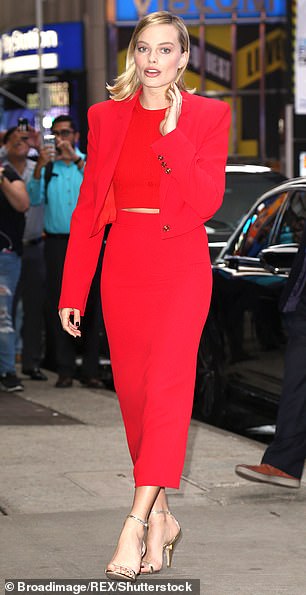 Mattel was no doubt pleased to see that Robbie likes to talk about embracing ‘new-wave feminism’, but as these pictures show, she has other distinct advantages when it comes to pretending to be the most famous doll on the planet.

Indeed she appears to have been quietly auditioning for years.

For some time, the actress has adopted a wardrobe eerily similar to the range for Barbie. Evening gowns have the same diamanté studs or plunging necklines, floral frills or risqué hemlines. Even Barbie’s more demure outfits – a flight attendant’s uniform or a Peter Pan-collared dress – have proved an inspiration.

Exposure: A plunging Valentino gown for Robbie (right) and a bejewelled jumpsuit for Barbie (left)

‘Margot is Barbie’s doppelganger and the fact she’s been dressing like Barbie, whether intentionally or purely by chance, simply reinforces the fact she’s the best woman for the part,’ the source said.

‘But Barbie is about more than good looks. Mattel wants her to be an aspirational figure who inspires young girls to be whatever they want to be in life.

‘Margot is someone who has achieved so much. She started in Neighbours and is now an Oscar-nominated actress. Who better to play Barbie? Her Barbie will be sassy, funny and smart.’ 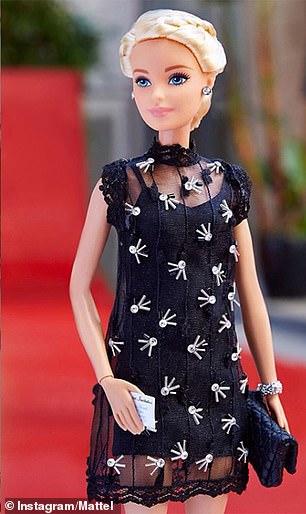 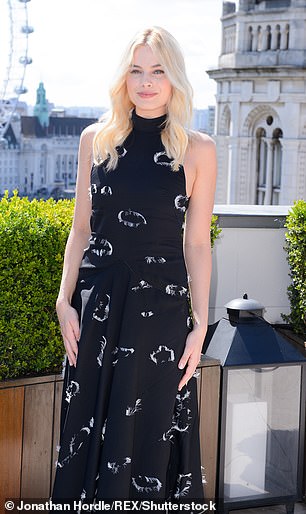 Black magic: Barbie (left) in an embellished shift and Robbie (right) in a Proenza Schoular halterneck

It is not hard to see why getting the £80 million movie made has been tough, or, as an insider put it, ‘development hell’. After all, the Warner Brothers production is battling a tide of Barbie-related controversy which has built over 60 years.

Actress and comedian Amy Schumer, who was initially cast as Barbie, dropped out in 2017 citing ‘scheduling issues’. She was replaced by Les Misérables star Anne Hathaway, who quietly left the project at the end of last year.

‘The script wasn’t up to par,’ explains the source – and it wasn’t the only one, with attempts dumped on the way, including one written by former Sex And The City writer Jenny Bicks. It seems most of them have stuck to a brave new theme: that Barbie must leave her fantasy world of Malibu mansions and pink Corvettes and finally face reality. 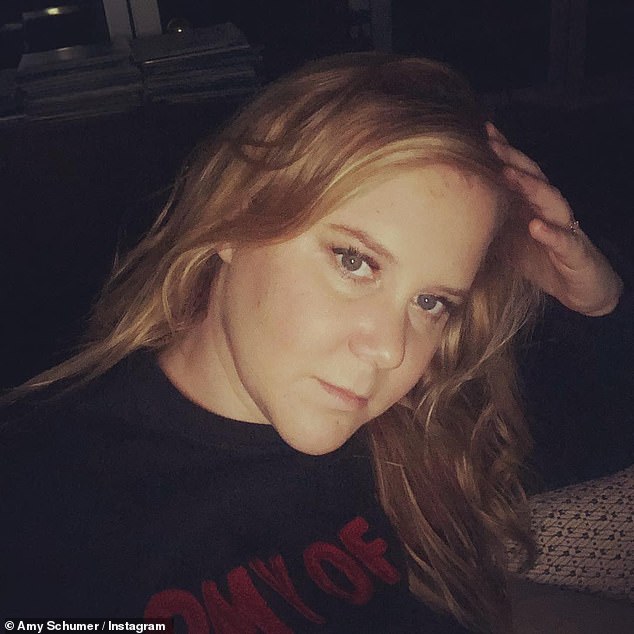 Amy Schumer (pictured above) was originally cast as Barbie 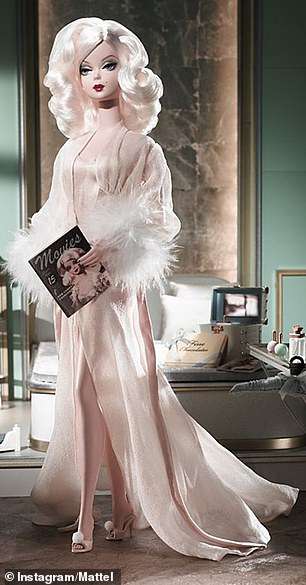 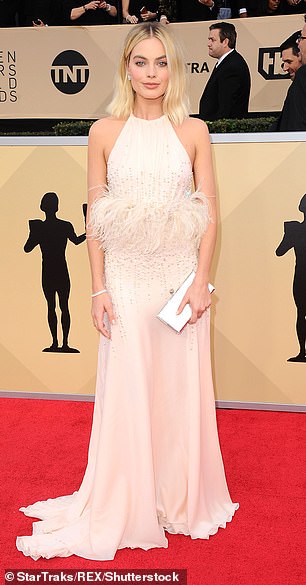 Old Hollywood: Barbie (left) looks every inch the icon in pink satin and feathers – as does Robbie (right) in Miu Miu

According to someone who has seen a version (the Robbie script is still being written), it has ‘echoes of Legally Blonde, about a perfectionist who enters the real world’.

‘One of the more recent versions of the film embraced modern themes like body dysmorphia, online bullying and how many young women struggle with body image in a world where peer pressure is immense,’ the source said.

‘Margot is producing the new film and will have a great deal of input into the plotlines and how her Barbie will be a modern woman making her own way in the world.’

The brand has historically been criticised for creating a doll which represented an image impossible for young girls to emulate.

If Barbie’s elongated body and tiny waist were translated into the real world, she would be 5ft 9in with a 39in bust, an 18in waist, 33in hips and a size three shoe. At just 110 lb she would be considered anorexic – and her child-sized feet would not support her body.

There have been additional grumbles that the range contributes to the derided ‘pink-ification’ of girls’ childhoods, and has historically failed to be racially inclusive.

Bright future: Sparkles everywhere for Barbie (left) in a skintight fishtail and Robbie (right) in an embellished Rodarte

Yet Mattel, which sells three Barbie dolls a second, argues it has been fighting to ‘modernise’ Barbie for some time.

Invented in 1959 by American businesswoman Ruth Handler, who was tired of seeing girls only being offered ‘baby’ dolls, they now come in a range of 17 different skin tones. No longer exclusively blonde, there are 24 possible hairstyles including an afro and long blue hair.

In 2017 they even introduced a line with more realistic figures, including curvy hips and thighs. Over the years she has gone from being simply a fashion template to holding a variety of ‘aspirational’ jobs from astronaut to surgeon. 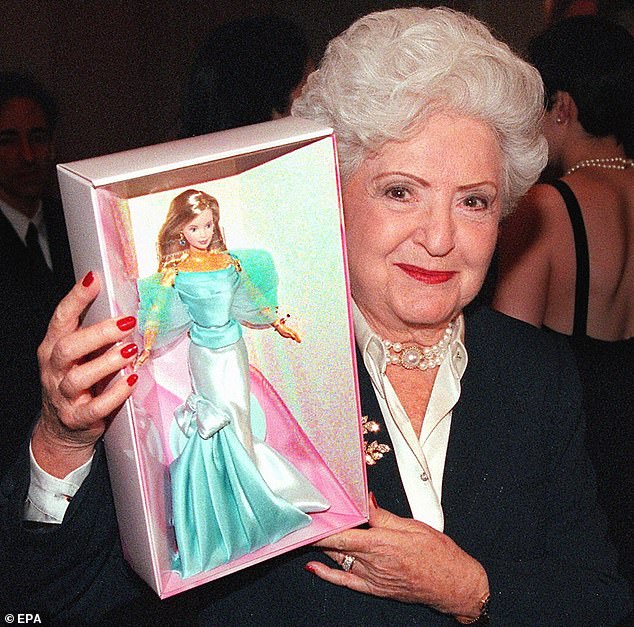 The history of Barbie films is not illustrious. So far there have been 28 animated versions, all of which went straight to DVD. This latest project has yet to announce a director or even a working title.

Despite the controversy, production has continued and cash to fund the film has not stopped flowing.

‘Mattel first decided to make a live-action Barbie film in 2014 but the challenge has been to make her relatable to today’s audience,’ explained the insider.

‘Barbie is iconic but there are pitfalls. The script has to balance how she has been perceived for generations – as a blonde bombshell – with how Mattel is trying to reinvent her for today’s audience.

‘It’s been a fraught process which is why other actresses have dropped out. But everyone is now buzzing about Margot. She’s perfect in looks but she also brings a sassy intelligence to the role.’

If her recent gushing comments about Barbie are anything to go by, she will have no problem fitting into her new role.

‘Playing with Barbie promotes confidence, curiosity and communication throughout a child’s journey to self-discovery,’ she enthused in a statement. Mattel will no doubt be hoping so.

Kourtney Kardashian hides her face during outing with daughter Penelope
Alessandra Ambrosio displays her off-duty style in ripped jeans on casual stroll in Paris
Wreckage of doomed Lion Air plane is pictured on the sea bed for the first time
I'm A Celebrity: Anne Hegerty breaks down in tears AGAIN when the two camps unite
Abandoned prison in Australia captured on video
Paul McCartney on wife Linda's photography career and photos of him and John Lennon
Brown bear who was 'sentenced' to time in a human jail has been freed to live in a zoo
Boris Johnson's father Stanley believes PM has the strength to beat coronavirus