New Governor Ron DeSantis has posthumously pardoned four black men accused in a racially charged 1949 rape case, even after the wheelchair-bound accuser rebuked him in court.

Republican DeSantis, who was sworn in on Tuesday, presided over the Board of Executive Clemency hearing on Friday in Tallahassee that voted to free the so-called ‘Groveland Four.’

The case has been documented in a book and is considered a blight on Florida’s history. One of the four men was killed before he could be charged and the other three were convicted on thin evidence.

The families of the men accused of the assault told DeSantis and the state’s three-member Cabinet – meeting as the clemency board – that there is overwhelming evidence the men were innocent and there was no rape – but the alleged victim was also present, and vocally insisted that the rape had occurred. 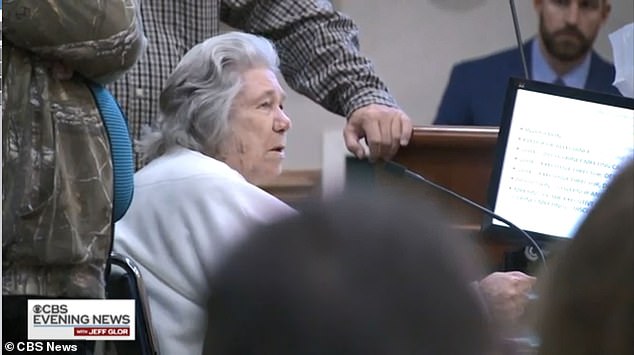 Norma Padgett, who was 17 when she said she was raped, sat in a wheelchair at the hearing on Friday and reiterated her testimony that the rape did occur, and the men were guilty 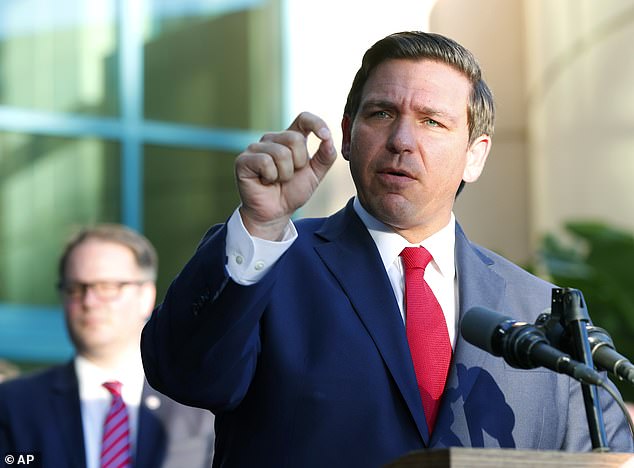 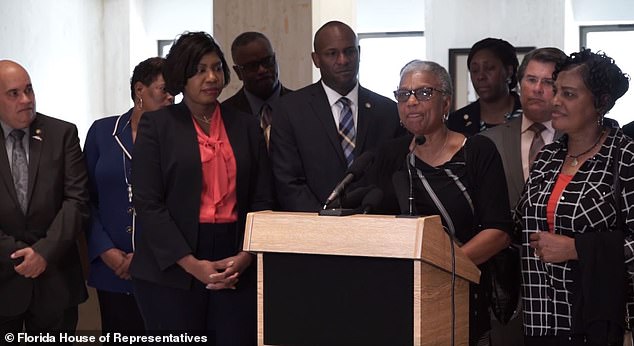 Family members of the Groveland Four are seen in 2017, when the Florida House put forth a resolution apologizing for the injustices that the men suffered

Norma Padgett, who was 17 when she said she was raped, sat in a wheelchair and told DeSantis and the Cabinet the rape did indeed happen.

Padgett, now 86, said she was dragged from a car, had a gun put to her head and was told not to scream or they would ‘blow your brains out.’

At one point, the two sides clashed when a family member of the accused dramatically called Padgett a liar.

Beverly Robinson, a niece of one of the Groveland Four, was speaking to the governor and the Cabinet when she turned to the woman and her sons.

‘It never happened. You all are liars,’ Robinson said.

‘That’s enough out of you,’ the woman said.

‘I know it’s enough out of me. It’s always enough when you’re telling the truth,’ Robinson replied.

The unanimous vote to pardon came almost two years after the state House and Senate voted to formally apologize to relatives of the Groveland Four and to ask then-Governor Rick Scott to pardon the men. Scott, now a U.S. senator, never took action. DeSantis replaced Scott on Tuesday and made the pardons a priority. 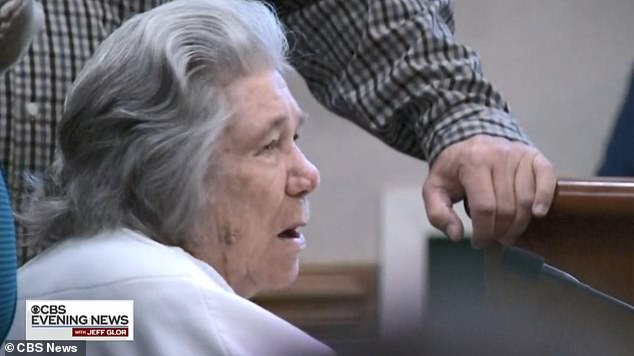 ‘Y’all just don’t know what kind of horror I’ve been through for all these many years,’ said Padgett (above), her voice trembling, as she reiterated her allegations on Friday 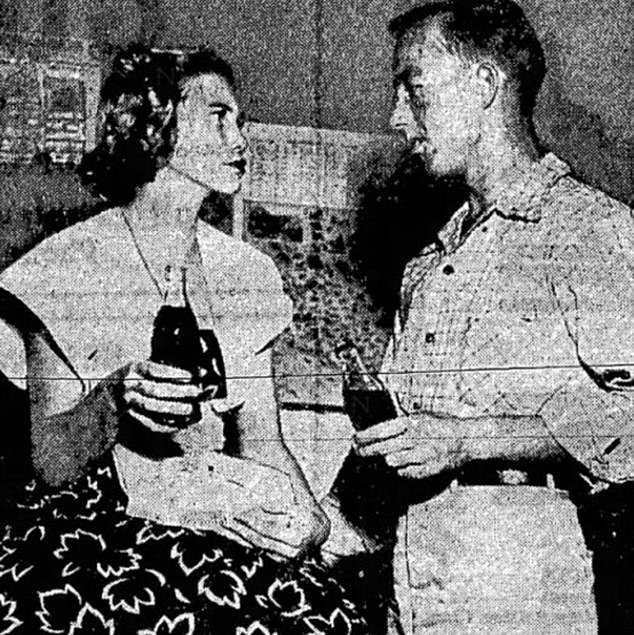 Norma Padgett and her husband Willie are seen after questioning in a 1949 news clipping. The couple both said they were present when Norma was attacked and gang raped

Groveland Four accuser’s full statement to the clemency board

Norma Padgett, 86, delivered the following statement before Florida’s Board of Executive Clemency and Governor Ron DeSantis on Friday, January 11, 2019 in Tallahassee:

‘My name is Norma Tyson Padgett Upshaw and I’m the victim of that night.

And I’ll tell you now that it’s on my mind, it’s been on my mind for about 70 years.

I was 17-years-old and this never left my mind…

I’ll tell you this: If you had a gun held to your head and told that you if you screamed and didn’t do what they said that they’d blow your brains out, so what would you do?

And if you had a daughter and a mother and a wife and a sister or a niece, would you give ’em pardon? No, I don’t think you would. I really don’t.

And every time it comes up, I just quiver on the inside. And I have lived it for 60 years.

When my boys was little, I kept my mouth shut ’cause…I was afraid something would happen to ’em. They might find out where they were and kill ’em or do somethin’ to ’em. Now my grandkids is up, and they go to school, and I worry about them. And my great-grandkids are coming up.

Y’all just don’t know what kind of horror I’ve been through for all these many years.

I never told my kids…they knew it but they never did know what kind of horror I’ve been through. And I love each and every one of them.

And I don’t want them pardoned, no, I do not. And you wouldn’t either.

I know she (Beverly Robinson, Samuel Shepherd’s cousin) called me a liar.

But I’m not no liar.

And right now, my nerves is so bad and I’m quiverin’ on the inside and I can’t help it.

I’m beggin’ y’all not to give them pardon because they done it.

Your minds might be made up. I don’t know.

If you do [pardon them], y’all going to be just like them…

And that’s all I got to say, ’cause I know I’m telling the truth.

I went to court twice.…

I can tell you right now — not the exact words — but could tell you today almost quote to what I said then. And if any of you got any questions, ask me, I’ll answer them the best I know how.

Like I say…if something happens to any of my kids I hope it ponders y’all’s mind [because] I begged you not to do it and it’s liable to.

Like I said, if there’s any question ya’ll want to ask me, I’ll try to answer it if I can.’

‘I don’t know that there’s any way you can look at this case and think that those ideals of justice were satisfied. Indeed, they were perverted time and time again, and I think the way this was carried out was a miscarriage of justice,’ DeSantis said. 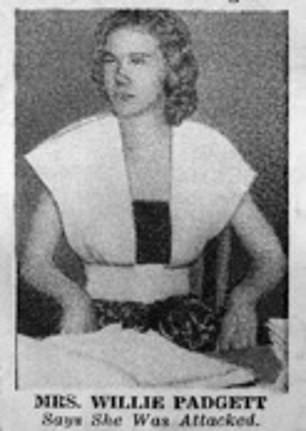 Padgett is seen testifying in the original case

The ordeal began in Lake County in 1949, when the then-17-year-old Padgett said she had been raped.

Her husband Willie also told police he was present when four black men attacked the couple in their car where it had stalled on a country road, and dragged her off at gunpoint to rape her.

Three of the men identified as suspects were arrested and severely beaten; a fourth, Ernest Thomas, fled.

A posse of about 1,000 men was formed to hunt down Thomas. He was shot 400 times when they found him sleeping under a tree.

White residents also formed a mob and went to a black neighborhood, burning houses and firing guns into homes in a disturbance that took days to quell.

Charles Greenlee, Walter Irvin and Samuel Shepherd were convicted by an all-white jury. 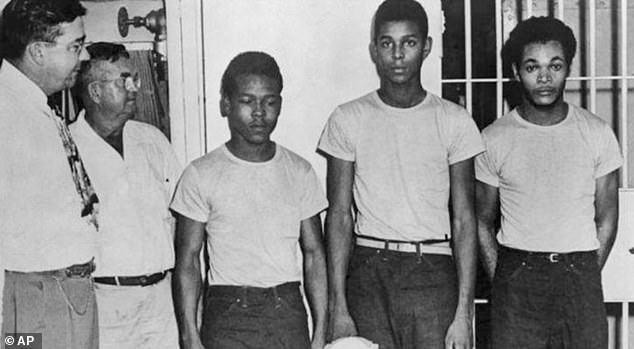 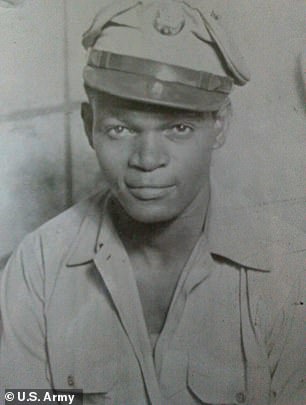 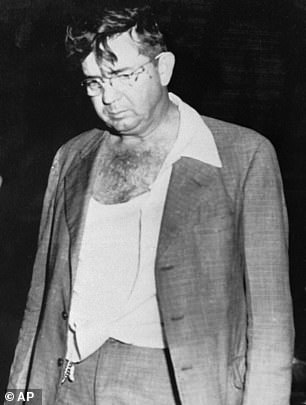 Samuel Shepherd is seen left while he was in the U.S. Army Air Corps, circa 1948. He was shot dead by Sheriff Willis McCall (right) while handcuffed in an alleged escape attempt in 1951

Other evidence that could have exonerated them – such as a doctor’s report that he was uncertain whether she was raped – was withheld at their trial. Greenlee was sentenced to life, and Irvin and Shepherd to death.

Just before those trials began, Lake County Sheriff Willis McCall shot Irvin and Shepherd, claiming the handcuffed men tried to escape as he transferred them from prison to a jail.

Shepherd died. Irvin was shot in the neck and survived despite an ambulance refusing to transport him because he was black. He was again convicted, even though a former FBI agent testified that prosecutors manufactured evidence against him.

Charges were never brought against any white law enforcement officers or prosecutors who handled the cases.

Irvin was paroled in 1968 and found dead in his car while returning to Lake County for a funeral a year later. 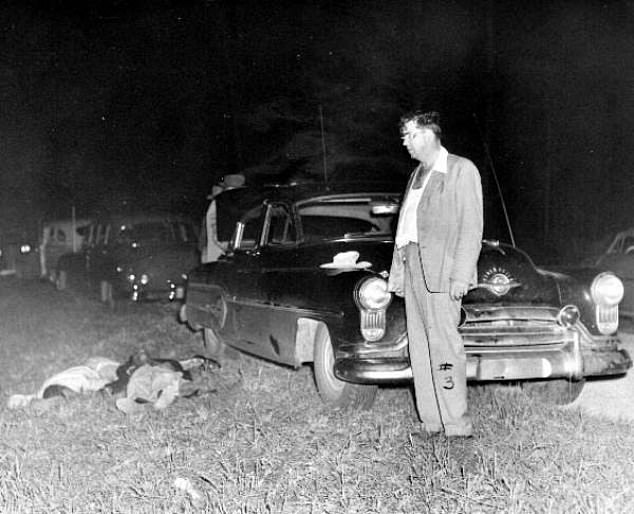 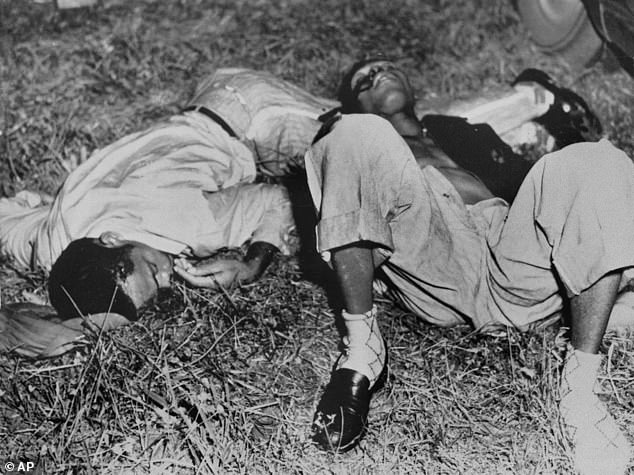 The two suspects are seen after being shot. Shepherd died. Irvin was shot in the neck and survived despite an ambulance refusing to transport him because he was black

Greenlee’s daughter, Carol Greenlee, told DeSantis and the Cabinet that there was overwhelming evidence that her father was innocent.

‘He was accused, put in jail and tortured for something he didn’t do,’ she said.

The woman who said she was raped disputed the families’ stories.

‘Y’all just don’t know what kind of horror I’ve been through for all these many years,’ she said. ‘I don’t want them pardoned, no I do not, and you wouldn’t neither. I know (Robinson) called me a liar, but I’m not no liar.’

Afterward, state Senator Gary Farmer, who sponsored the 2017 resolution apologizing to the families, said the woman’s comments were disappointing.

‘She’s now here at the end of her life and she had a chance to come clean, to seek forgiveness for herself and to support the justice these four families and these four men deserve,’ Farmer said. ‘It’s very said that she lost this opportunity and continues to perpetuate this lie. This crime did not happen. The evidence is overwhelming.’

Members of the Greenlee family met with reporters after the vote. Carol Greenlee said while the family is grateful for the pardon, she wants her father exonerated.

‘I started out with two goals in mind. One, for the world to know the truth, and that is my father is not a rapist. The second was to clear his name, so his children, his grandchildren and nieces and nephews would not continue to walk around with this stigma, with the shame,’ she said. ‘Those two things were accomplished. And the complete exoneration will close the gap. That’s our mission.’

Despite the pain the family went through, Greenlee’s brother, Wade, said his parents always taught their children to love and not hate.

‘If I had an opportunity this morning, I would have told (the accuser) that the Greenlee family has forgiven her a long time ago. We have no hate against her because we were taught differently,’ he said.

Japanese lady dressed as a maid turned rock star stuns world air guitar championships in Finland
Gun-toting neo-Nazi, 26, who held train and terrorized 175 passengers gets 14 years in prison
Boohoo named and shamed in Parliament as expert says £5 dress is too rubbish for charities to want
New York is one of the safest cities in the world because of ‘cyber sleuths’
Virginia driver annoys other motorists by speeding down shoulder - but cops pull him over
'Hot grandma' yoga teacher shocks her Instagram followers when she reveals she's turned 40
Bernie Sanders admits he will CUT the hours of staffers who are not getting the $15 minimum wage
US Songwriter Allee Willis dies in LA