Meghan Markle’s not shedding her Hollywood roots anytime soon — particularly not when it comes to her footwear.

The 37-year-old visited Smart Works, a charity that provides interview clothes and training to unemployed women in need, at St. Charles Hospital in West on Thursday, and dressed to impress in a meticulous outfit of designer duds.

But while her simple $218 black Hatch dress, her classic $2,990 Oscar de la Renta coat, and even her $2,710 box bag were timeless, traditional choices, Meghan still made sure to make a little red carpet rebellion in a pair of trendy — and sexy — PVC pumps. 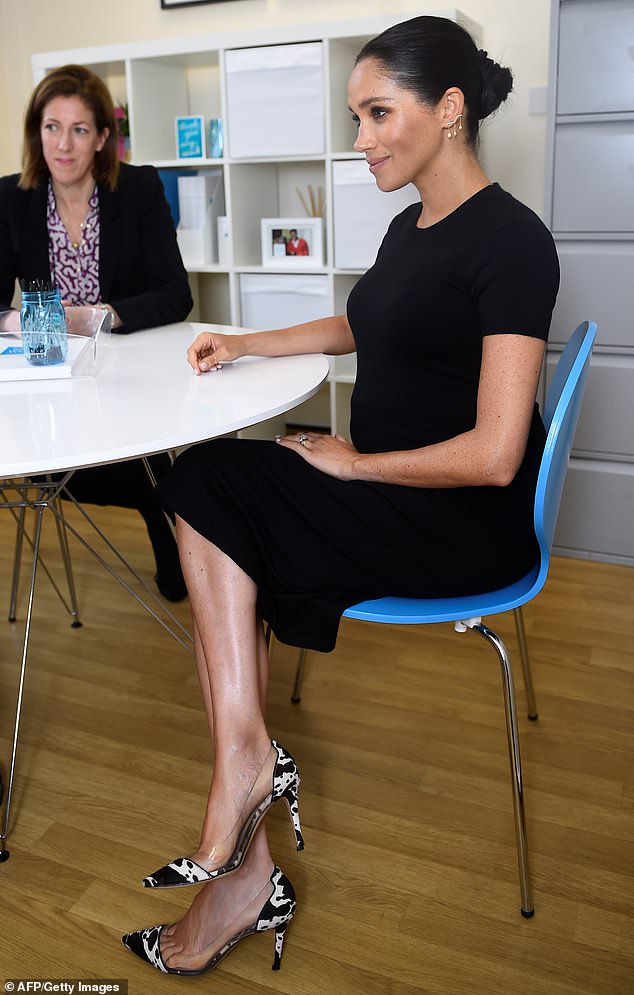 Dressed up! Meghan Markle wore a trendy pair of shoes for her visit to Smart Works in West London today 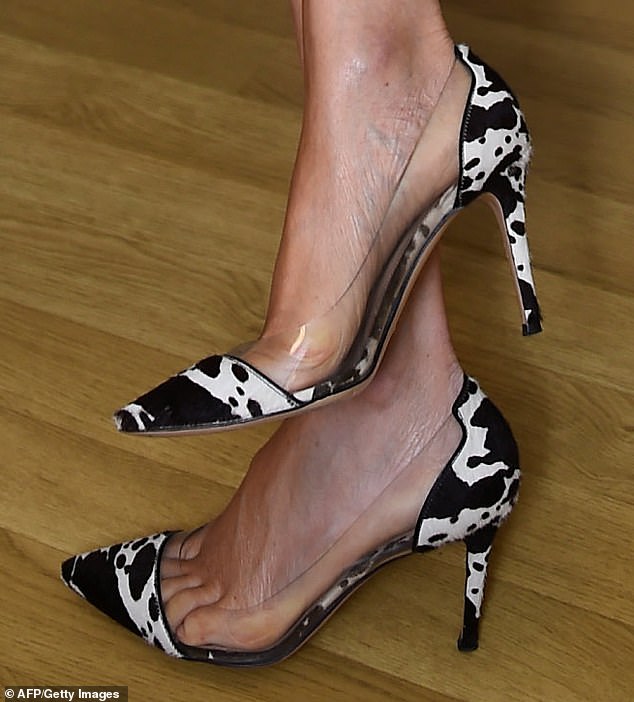 Fashion forward: The 37-year-old’s Ginavito Rossi ‘Plexi’ pumps feature a cow print and a clear PVC lining around part of the foot 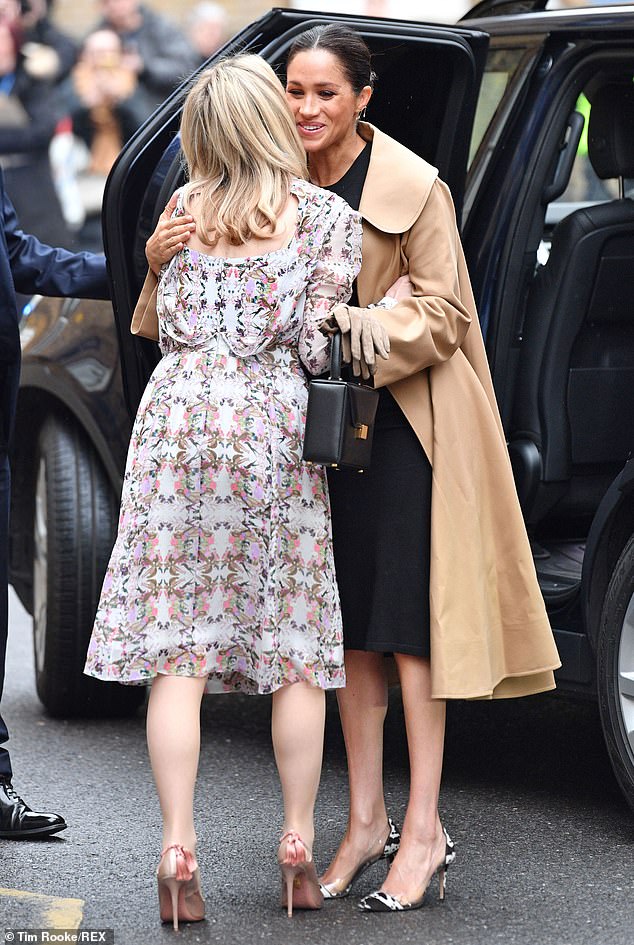 Hello! The Duchess forwent pantyhose, too, sticking to her more modern take on royal fashion

Designer girl: She smiled as she arrived at the charity wearing $218 Hatch  maternity dress and a $2,990 Oscar de la Renta coat

The shoes have a black-and-white cow print on the heels and toes, with clear PVC inserts running up the sides and along the upper toe area.

While PVC heels are a favorite among Hollywood’s trendy stars, they’re hardly a go-to for the royal family, making Meghan’s choice a standout one.

Other members of the family, including the Queen and Meghan’s sister-in-law Kate Middleton, also typically wear nude pantyhose with dresses and skirts, but Meghan has made a habit of skipping hosiery altogether.

Though the Duchess has changed her style quite a bit since leaving Suits behind and pairing off with Prince Harry, she hasn’t completely stepped away from her previous preferences, either.

Nor as she cleaned out her closet.

The Gianvito Rossi pumps she wore on Thursday have actually been in her wardrobe for years, and appeared in a photo of her shoe closet that she shared on her Instagram page before deleting it.

Back in 2014, she also shared a blog post on her website The Tig in which she documented a day in her shoes. 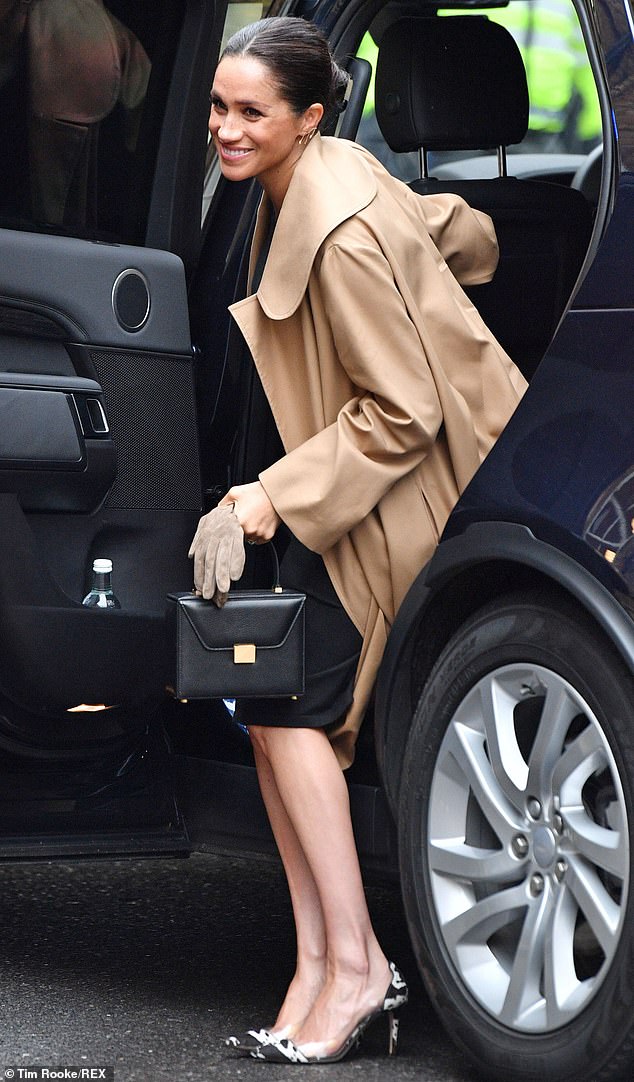 Arrived: Meghan also held onto a $2,710 Victoria Beckham bag as she stepped out of the car

Back again: The Duchess of Sussex spent time with  charity chair Lady Juliet Hughes-Hallett. She has visited Smart Works before 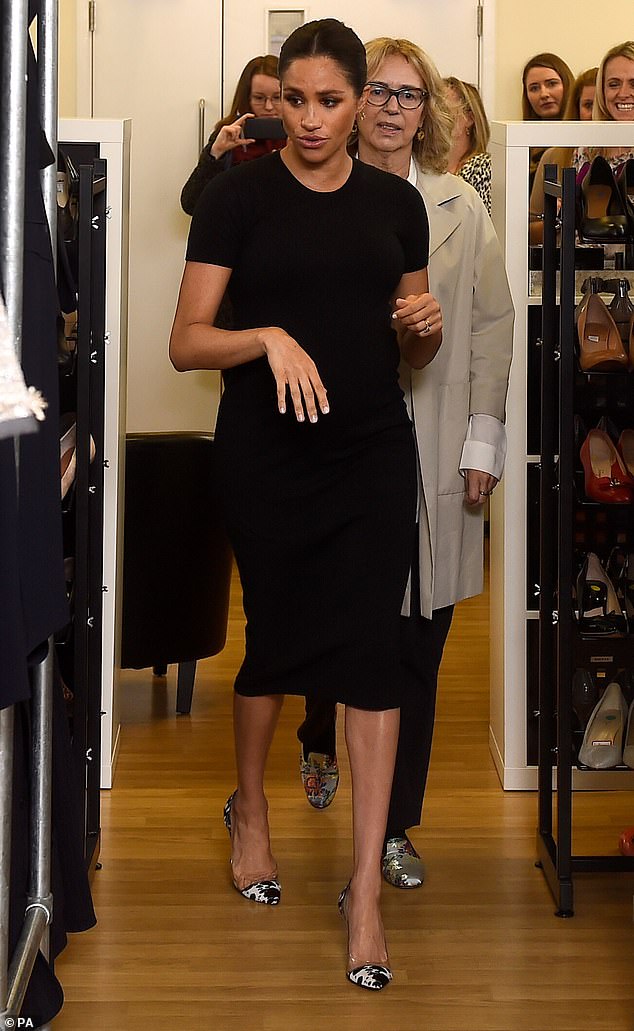 Stylishly charitable! Kensington Palace announced today that Meghan has also taken on honorary roles with the National Theatre and Association of Commonwealth Universities

In addition the the shoe closet snap — which included 39 visible pairs of shoes, from leopard pumps to red bow-bedecked sandals — she also took photos aimed down at the four pairs of shoes she wore on a particularly busy day, including those Rossi pumps.

‘Some days I wear one lone pair of shoes, and others, my toes are caught in a fashion flurry of beautiful footwear from day to night,’ she wrote at the time, according to the fan site .

‘On this particular day, I had the luxury of slipping out of my go-to Jack Purcell kicks in favor of looks of the high fashion persuasion. From Chanel, to Blahniks & McQueen on set for Suits, to some beauties from Gianvito Rossi for an event at night, it was a Cinderella glass slipper kinda day at its finest.’

Interestingly, this also doesn’t happen to be the first time she’s adorned her feet in PVC since she and Harry made it official.

In May, she wore a pair of $450 Tamara Mellon d’orsay pumps to a garden party for Prince Charles’ 70th birthday. The nude shoes features a small PVC insert on the open side along the inner foot.

And in November of 2015, before she met Harry, she attended the CFDA/Vogue Fashion Fund Awards in a Misha Nonoo mini dress with another pair of $325 Gianvito Rossi PVC shoes — this time a black pair of mules with thick PVC straps across the front. 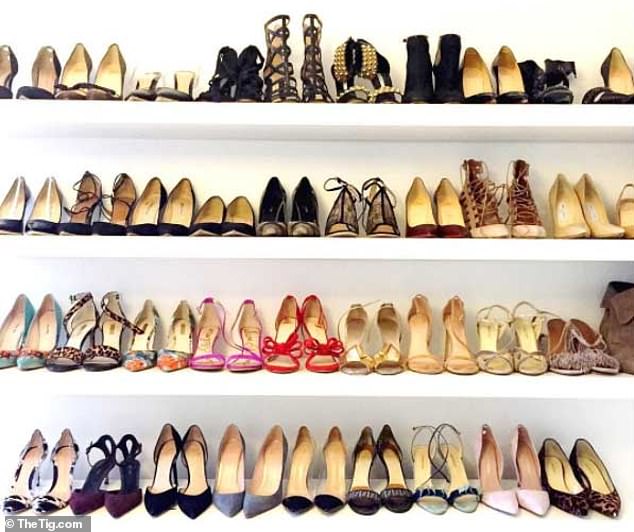 Jealous! Back when she ran her website The Tig, Meghan showed off a snap taken inside her shoe closet — revealing she’s had these PVC shoes (bottom left) for years 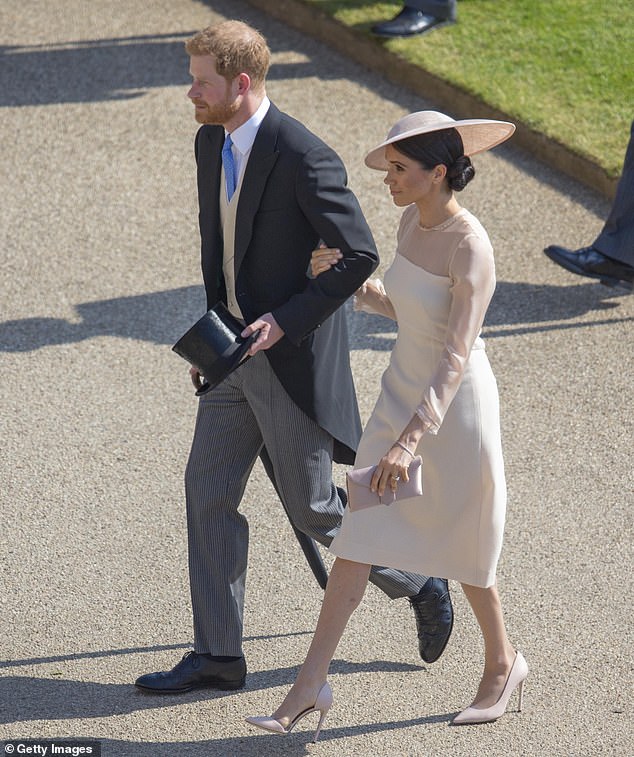 Another pair! She also wore a pair of Tamara Mellon shoes with PVC inserts back in May 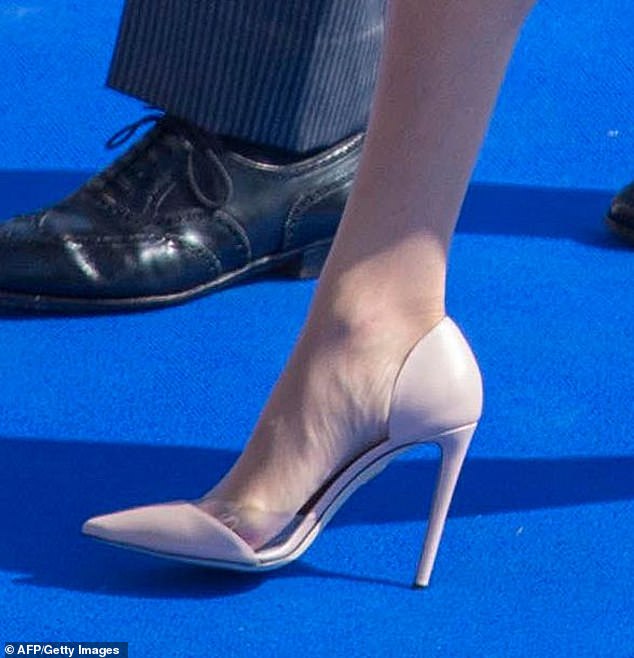 Mixing it up: On those shoes, the plastic detailing was a bit more subtle

Flashback: She also wore a different pair of Gianvito Rossi PVC shoes (left) at a Hollywood event in 2015, and other PVC pumps in April 2016 (right)

Though Megan’s clear footwear is certainly a unique choice for a royal, the style is now fairly commonplace among celebrities and Fashion Week regulars.

Kim Kardashian is a huge fan of the look, and has worn not just PVC pumps and sandals but tall see-through boots made of plastic.

She also infamously wore a pair of PVC shoes while she was pregnant in 2013, squeezing her poor swollen feet into the too-small shoes.

Though Meghan is also expecting, she stuck with a pair that fits — and luckily for her, her feet don’t seem to be swelling much yet.

Besides Kim, Chrissy Teigen, Katy Perry, Kylie Jenner, and countless others have taken clear shoes for a spin in the past six or so years.

In fact, several stars have worn the same Gianvito Rossi Plexi pumps that Meghan has.

Meanwhile, her sister-in-law has also worn pumps by the brand — though she opts for the PVC-free Gianvito 105 style.

She has several pairs in a variety of colors that she has been spotted wearing on numerous occasions. 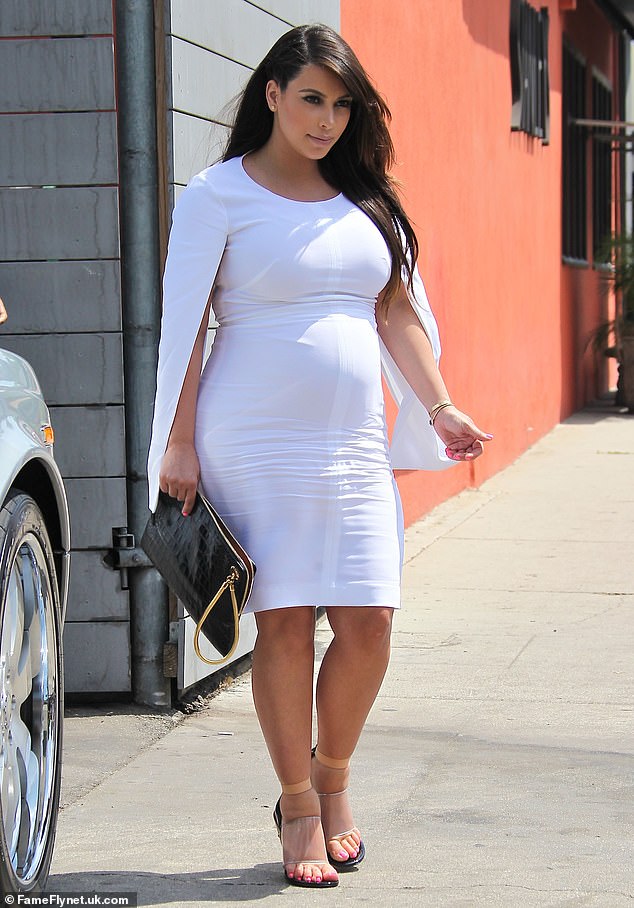 Remember these? Kim Kardashian wore PVC sandals when she was pregnant in 2013 — except hers were much too small for her poor swollen feet 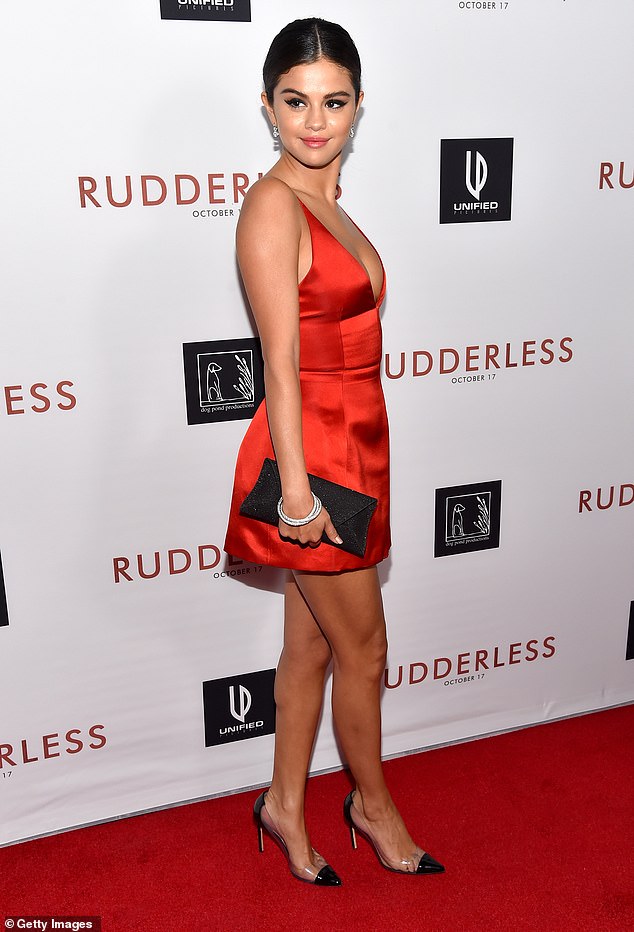 Popular look! The style of Gianvito Rossi that Meghan wore today is popular among celebrities, including Selena Gomez (pictured October 2014)

Famous feet: Anna Kendrick (pictured left in October 2016) and Penelope Cruz (pictured right in September 2016) also have pairs of their own 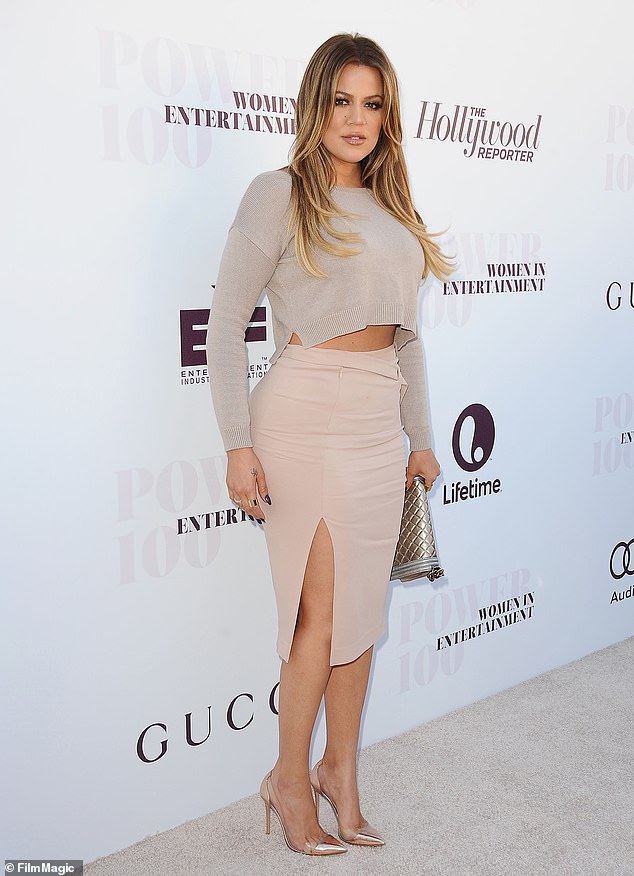 Not her! Kate Middleton has also worn pumps by the designer, though she favors a version without PVC

Shoes aside, Meghan, who is expecting her first child in the spring, was putting the focus on good deeds on Thursday whens he visited Smart Works.

The Duchess has privately visited Smart Works several times over the last year and worked with some of the women who have benefited from the charity’s support, Kensington Palace revealed.

She told the group, which included two former clients: ‘I’m so happy to be here. You guys know I’ve been quietly coming by… close to a year. It’s nice to be able to now do it publicly and really talk about the work that you do.’

The Duchess waved at the press before heading inside. Women are referred to the charity from organizations such as job centers, work programs, prisons, care homes, homeless shelters, and mental health charities.

Kensington Palace announced today that Meghan has also taken on honorary roles with the National Theatre and Association of Commonwealth Universities, patronages both previously held by the Queen.

The Queen has been patron of the National Theatre for 45 years and the ACU for 33 years. The Duchess will also be patron of Mayhew, an animal charity based in Kensal Green, North West London.

She added: ‘She’s really hands-on and involved, and has a natural empathy with people that we’ve been really impressed by, she’s amazing. She puts people at their ease. It does feel slightly surreal.’

Meghan helps mother, 55, who was out of work for 16 years pick an outfit

Meghan helped Patsy Wardally, 55, pick out an outfit during her visit to Smart Works today.

The mother-of-three from East London had trained as a plumber but had stopped work 16 years ago to look after her autistic daughter. 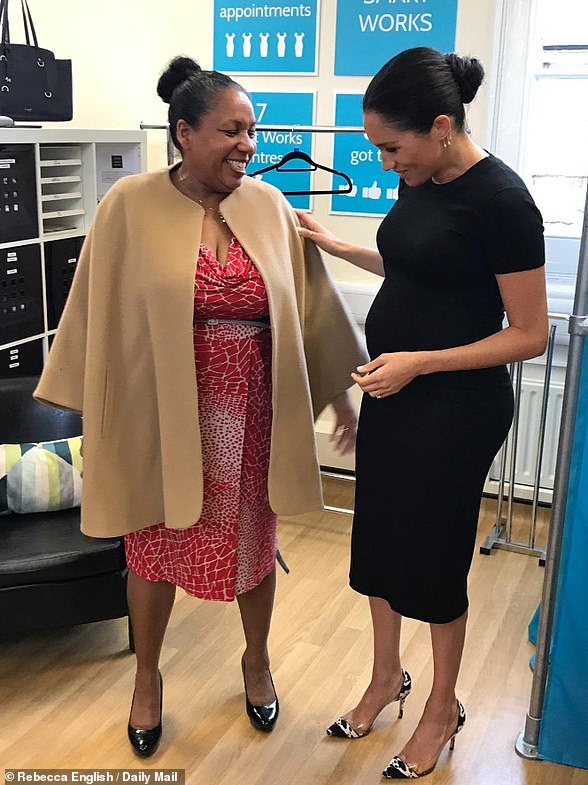 She told the duchess how hard life had been for her, but Smart Works had helped her land a job at Gatwick Airport as a passenger services agent.

Mrs Wardally said: ‘It was so exhilarating to meet the Duchess. She picked out a Hobbs cape, a pair of earrings, a bracelet and a handbag for me.

‘She chose things that were fantastic and now I feel much more confident and more beautiful.’

Meghan later picked out a black handbag and tan cape for Mrs Wardally.

‘Green seems to be the colour,’ she joked, prompting laughter from the room as she complimented the mother on her green coat.

The duchess then picked her out a tan cape and a black shoulder bag to go with a red and white patterned dress.

‘Isn’t that great,’ Meghan said as she glanced at Ms Wardally – and then pointing at a pink bracelet which complemented her dress, added: ‘Such a pretty colour, is this one of the accessories here?’

Meghan told Mrs Wardally she ‘loved’ her first green dress and told her the wrap style was great as ‘you can play around with it’.

Afterwards, Mrs Wardally said: ‘I was so happy meeting her! No words can explain it! The things she chose me – I know it’s me but my self-esteem just shot through the roof.

‘She’s very down-to-earth, very straightforward and has gorgeous skin! I was watching her tiny little baby bump and I thought ‘Wow! It’s so small’ as when I was just three months pregnant I was out here – you could see my tummy before you saw me!

‘She chose me some accessories and asked me if my style was ‘simple’ or statement’ and I said ‘simple’.

‘She picked a chunky black bead bracelet and some pearl and diamond earrings which were very my style.

‘She asked me how I got involved with Smart Works and I explained that I used to be a plumber but was out of work for a long time – maybe 16 years – due to my kids.

‘My daughter was diagnosed with autism when she was three and I had to make a decision whether to work or stay at home and look after her. So obviously I stayed at home.

‘Now she’s nearly 18 so I thought it was time for to do something different. I was referred here in February last year for getting the clothes and applying for jobs.

‘I got my job with Menzies at Gatwick airport last April, did all the training and was made permanent after I passed all my probation last November.

‘I feel so exhilarated now I’m back at work – I look forward to going into work. What I look like is so important in my new job as I represent the company and I have to be well groomed.

‘Smart Works taught me how to dress and gave me so much confidence.’