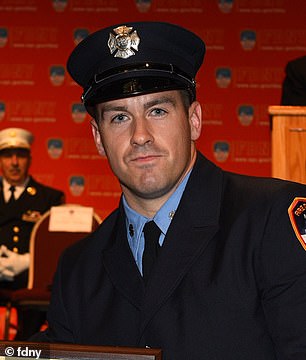 A wake was held Wednesday for Steven H Pollard (pictured), who fell 52ft to his death on Sunday after slipping through a 3ft-wide gap between lanes of the Mill Basin Bridge in Brooklyn

Hundreds of mourners gathered Wednesday night for the wake of FDNY firefighter Steven Pollard who died while responding to an accident when he fell through a gap on the Belt Parkway on Sunday.

The tragedy rippled through New York City’s fire department, who are now mourning the loss of Pollard. He was just 30-years-old.

Wednesday night marked the start of three days of services for Pollard, with another wake schedule for Thursday. His funeral will take place on Friday at Good Shepherd R.C. Church in Brooklyn.

‘At a time when people are tempted to get cynical and wonder where our heroes are, where sacrifice and selflessness is, all you’ve got to do is think about Steven Pollard,’ said Cardinal Timothy Dolan.

‘We all hope that when our loved ones go off to work each tour they come back safe,’ said FDNY Commissioner Daniel Nigro said, according to . ‘But in the back of each family’s mind is the knowledge that they may not.’

The wake at Marine Park Funeral Home continues Thursday from 2 to 4pm and 7 to 9pm. 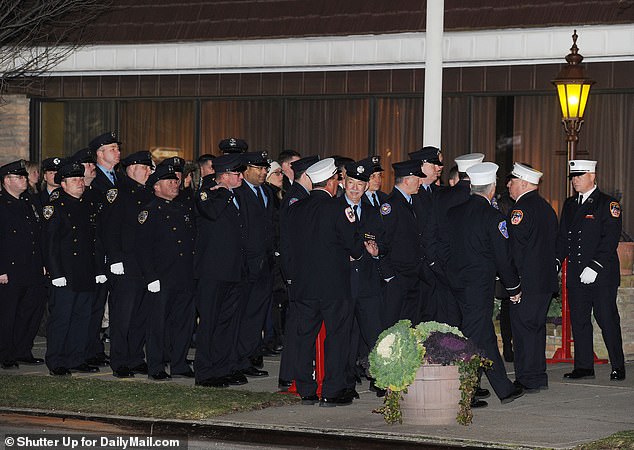 Hundreds of New York’s fireman lined the outside of the Marine Park Funeral Home Wednesday to pay their respects for the fallen Bravest. They had the whole block on lock down with NYPD officers on hand with bomb sniffing dogs and machine gun policeman on watch

Highest respects: FDNY Commissioner Daniel A. Nigro (left) and Cardinal Timothy Dolan, head of the Archdiocese of New York gave their condolences during Wednesday’s wake and expressed the highest of praise for Pollard, who died saving others lives 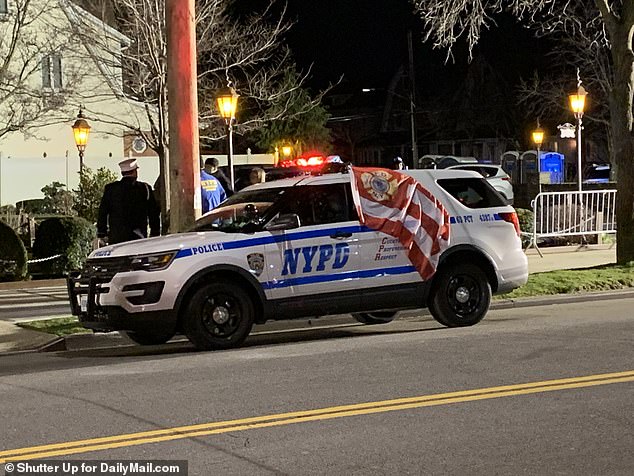 The NYPD was also on hand to give top notch security to firefighters, friends and family who came out in droves to pay their respects to Pollard 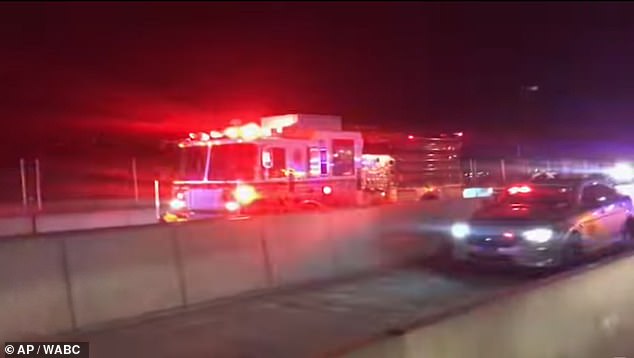 Pollard was trying to cross from one side of the carriageway to the other Sunday when he fell, though it is unclear if he knew the gap was there because it was added recently 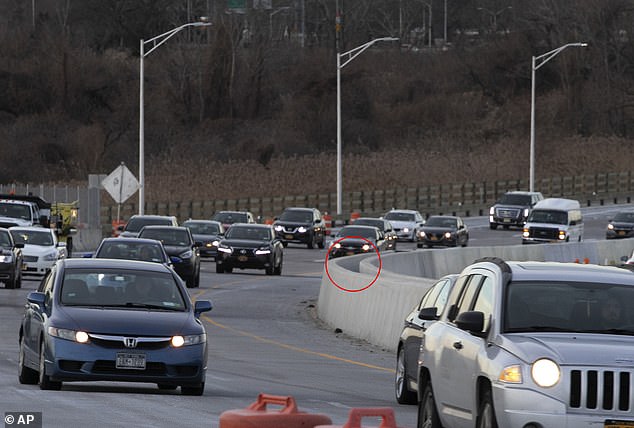 On Monday, an emotional bunting ceremony was held to honor Pollard.

Pollard had been walking between the carriageways of the Mill Basin Bridge on  Sunday when he tragically tumbled 52 feet through a 3 foot-wide gap that he attempted to climb over.

The bridge, which was originally solid the whole way across, was recently rebuilt to include a gap between each side of the road.

The ceremony took place outside Ladder Company 170 in Canarsie, where the American flag hung from a ladder truck as ‘Amazing Grace’ played.

Pollard was remembered throughout the community Monday as a hard-working and ‘model’ firefighter. 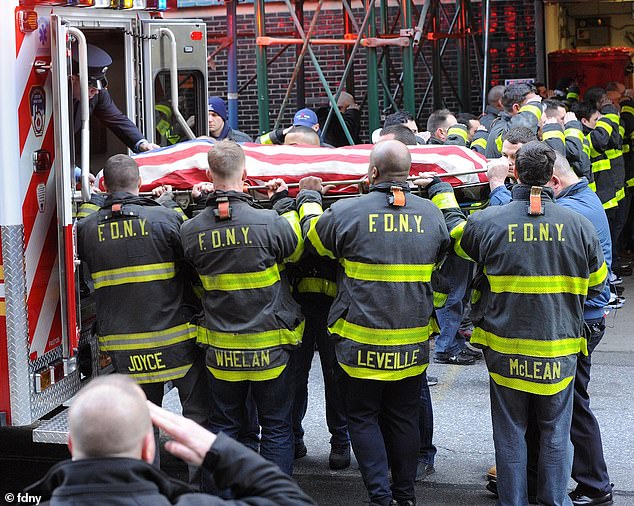 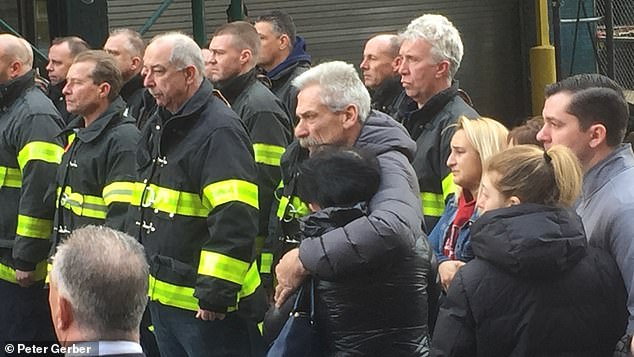 Captain James Quinn said: ‘Steven Pollard came to us in November of 2017, out of probie school.

‘He was the model probie. Any job we gave him, he accomplished it. Any task we asked him to do, he did it well.

‘He was a good firefighter… he was on the way to being a great firefighter. He was going to become an anchor in the firehouse.’

New York City Mayor Bill de Blasio also said Monday: ‘[Pollard] devoted his life to the people of our city, like his brother, like his dad, he was trying to do such a good and important thing, and it’s just really painful to see him as we did in the hospital.’

The late Pollard comes from a family of firefighters, including father Ray Pollard, of Ladder 102 in Brooklyn and his brother Ray Pollard Jr., who is an active member of Ladder Company 114.

He is also survived by his mother. 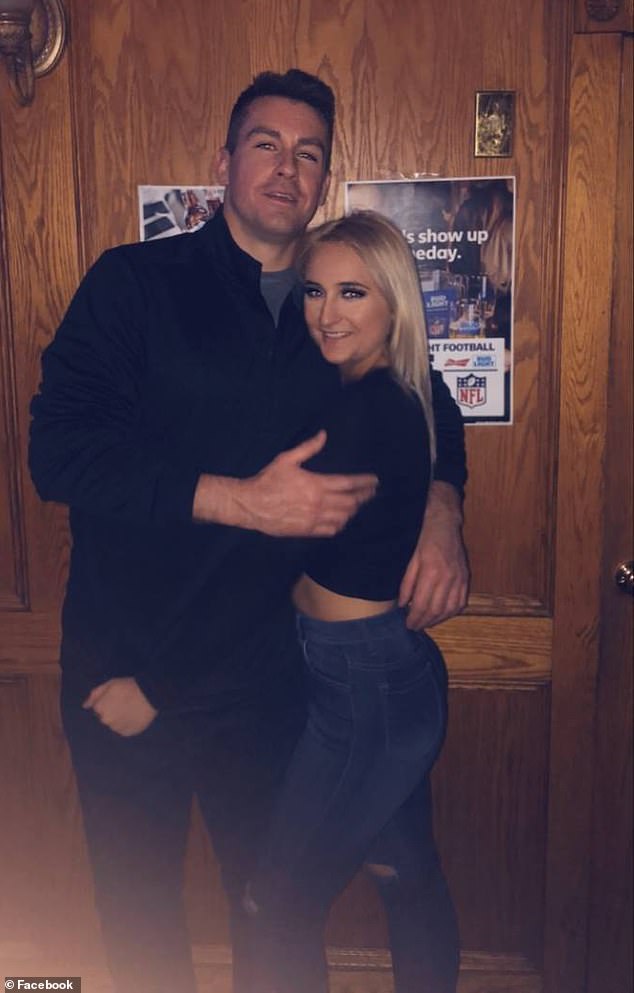 Brianne Torkel, the girlfriend of fallen New York firefighter Steven Pollard, has posted a touching tribute to him on social media

His girlfriend, Brianna Torkel, took to Facebook this week to honor Pollard, in a touching tribute.

‘To know you was to love you. My sweet angel I am so proud of you,’ she wrote.

‘You left this world a hero, something you were born to be.’

Torkel credited her boyfriend with lighting ‘a spark back in me that I thought was long gone’.

‘Thank you for loving me the way you did,’ she continued.

‘You were my safe place, my protector, my ball buster, my big idiot, and my absolute best friend. You were my home.’

Torkel said she was ‘so proud’ to have known Pollard, who fell while trying to cross a 3ft gap that separated the eastbound and westbound lanes of an overpass bridge.

‘Some people never get to experience the love we shared in a lifetime, and I was lucky enough to have it with the absolute greatest man I have ever and will ever know,’ she continued.

‘I have unfortunately gained the greatest angel I could ever ask for, the love of my life.’

‘Please watch over your parents, family, all the fellas down at the fire house and me, puppy. I love you so much. Rest in the sweetest peace.’ 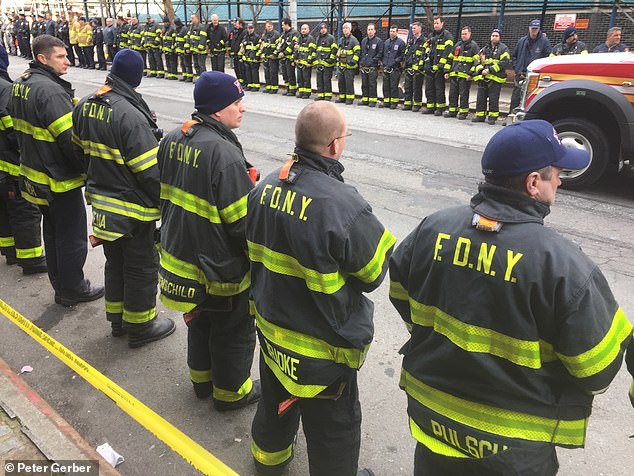 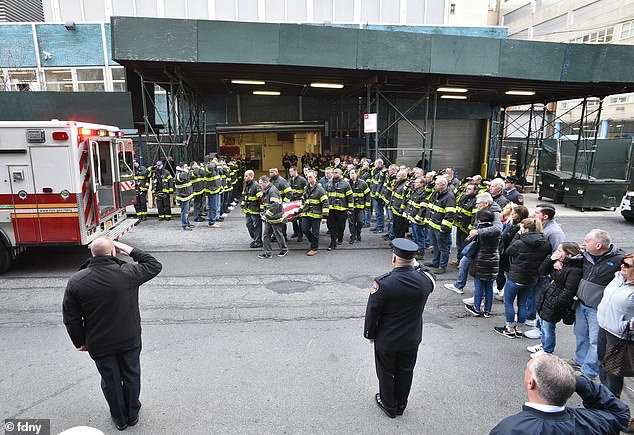 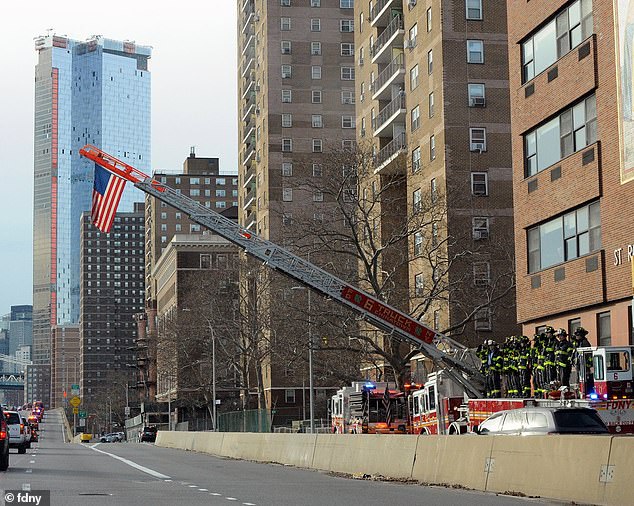 Nigro said: ‘To lose a member just at the beginning of his career like this is devastating to us.’

‘#NYC will never forget your sacrifice,’ the tweet read.

In another statement posted on the department’s Facebook page Monday morning FDNY Commissioner Daniel A. Nigro and Mayor Bill de Blasio said: ‘It’s an incredibly sad night for the Pollard family, for the Fire Department family, and for our city. 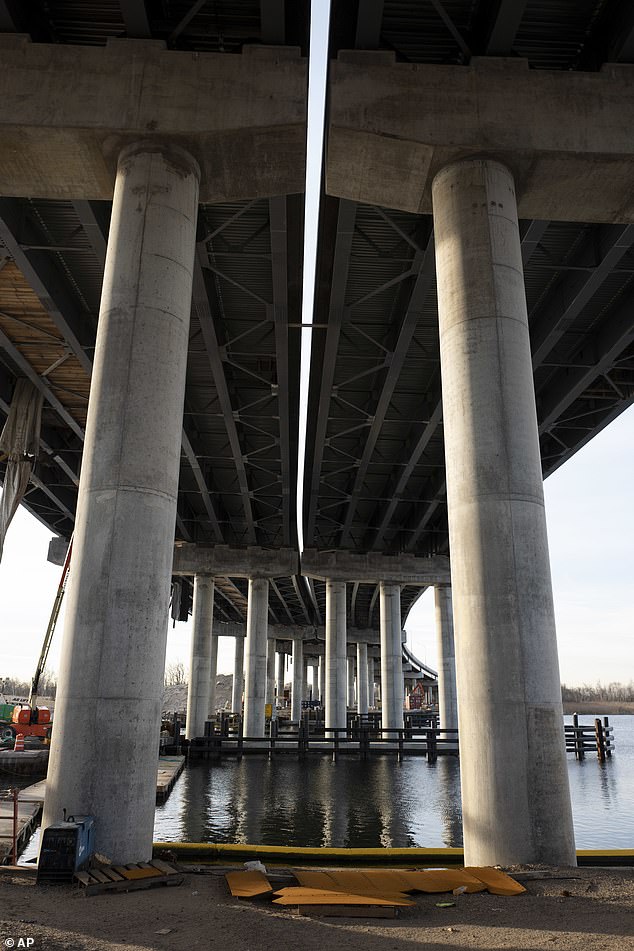 A gap where the firefighter fell through separates the twin spans of the Mill Basin Bridge, Monday in the Brooklyn borough of New York

‘He lost his life tonight in the process of helping others.’

De Blasio and O’Neill went to the hospital after the accident.

‘This is a family who has done so much for New York City and now they’re going through this loss and this pain. It’s a very, very tough situation,’ de Blasio said.

Nigro said Ladder Company 170 in Brooklyn was called to the two-car accident with injuries on the Belt Parkway, just east of Flatbush, on Sunday at 10 p.m.

As the firefighters were going to help the victims Pollard slipped through a gap in the roadway and fell approximately 52 feet to the ground below.

He was pronounced dead at a Kings County Hospital.

The man who he was trying to save, Travis Simms, 30, revealed his overwhelming feeling of guilt while speaking to the Monday from his home.

‘Pollard, he’s my hero. I send my prayers, my condolences to his family. I could only imagine what they’re going through.

‘When I got to the hospital, that’s when I found out [Pollard died]. Immediately I couldn’t control my emotions.’

Simms, who was left with a broken rib and seven stitches on his finger, plans to attend his hero’s funeral.

‘I have to tell to him, ‘thank you,’ say my final goodbye… because at the end of the day, he made the ultimate sacrifice to make sure that I was alright.’

Pollard is the 1,151st member of the FDNY to die in the line of duty.

The deadly incident is under investigation.