New Caledonian crows can tell how heavy an object is simply by seeing it sway in the wind, researchers have found.

The experiment makes crows the first creatures other than humans to have the ability.

Researchers say the animals use the skill to search for food. 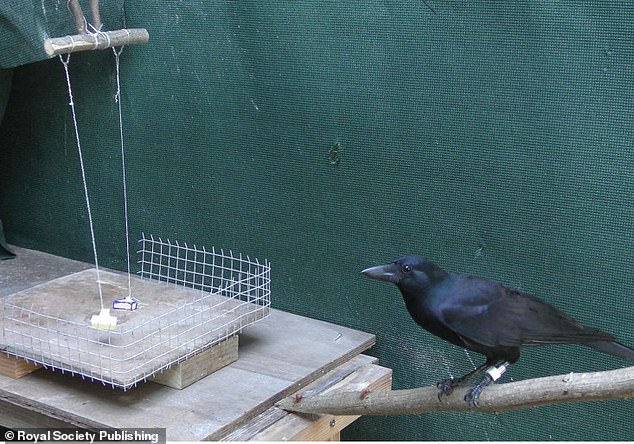 The Cambridge experiment makes crows the first creatures other than humans to have the ability. Researchers say the animals use the skill to search for food. Pictured, the experiment in progress

HOW THE EXPERIMENT WAS DONE

In the experiment, the team first trained 12 crows to discriminate between light and heavy objects.

During this initial training, the birds were able to touch and pick up the objects.

Then pairs of unfamiliar objects – one light and one heavy – were suspended from strings in front of an electric fan before the birds could interact with them.

After seeing how they moved in front of the fan, the birds touched the correct object first, according to the rule they learned earlier, in 73 per cent of tests.

If the test was done with the fan switched off, the birds did no better than chance.

‘If we observe an object being blown down the street by the wind, we can infer that it is light,’ the researchers, led by Sarah Jelbert at the University of Cambridge, wrote.

Previous research has found crows have a reasoning ability rivalling that of a human seven-year-old.

‘We reason based on how the wind works: the wind can move light, but not heavy, objects.

‘Do animals make such inferences? We found that New Caledonian crows infer the weight of objects from how they act in the wind.’

Crows were trained that they needed either light or heavy objects.

After observing novel heavy and light object being blown in an (electric fan) breeze, crows interacted with the correct object first, the team found.

‘Overall, our results suggest that these birds are capable of making inferences about the properties of objects in the world around them, without having to directly experience those properties themselves,’ the researchers wrote.

The believe the crows use the skill to find food.

‘Determining the weight of small objects may be particularly relevant to New Caledonian crows, as they consume candlenuts, for which weight correlates with quality, and drop snails, which can be very heavy relative to a crows’ body weight,’ they said.

This test has never been done with any other animals, so it’s unclear how widespread this ability is.

“If you set up the situation in a way that’s meaningful to the animal and remove other ways they can fail, they show they are capable of so much more than we give them credit for.”

WHY CROWS ARE AS SMART AS CHILDREN

Crows have a reasoning ability rivalling that of a human seven-year-old, research has shown.

Scientists came to the conclusion after subjecting six wild New Caledonian crows to a battery of tests designed to challenge their understanding of cause and effect.

The tasks were all variations of the Aesop’s fable, in which a thirsty crow drops stones to raise the level of water in a pitcher.

In the ‘water displacement task’, crows worked out how to catch floating food rewards by dropping heavy objects into water-filled tubes.

The birds’ understanding of the effects of volume displacement matched that of human children aged between five and seven, scientists from the University of Auckland claimed.