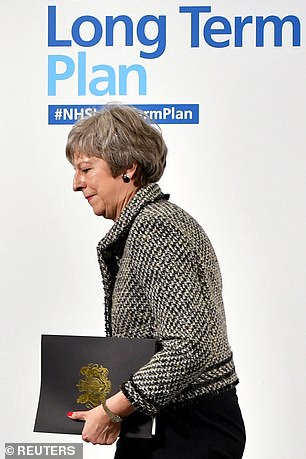 The PM is still scrambling to win over mutinous MPs as she stares down the barrel of a disastrous defeat in the vote, due to happen next Tuesday

British officials are said to be ‘sounding out’ the EU about delaying Brexit beyond March as Theresa May faces a mounting political crisis.

There are claims that the UK has been ‘putting out feelers’ over the prospect of an extension to the Article 50 process.

Brexit Secretary Steve Barclay did not completely rule out the prospect this morning – although he insisted government policy is still to leave the EU in March.

Ireland has also made clear it would not block any effort to push back the exit date.

The apparent manoeuvring came as the PM scrambles to win over mutinous MPs as she stares down the barrel of a disastrous defeat in the vote on her Brexit deal, due to happen next Tuesday.

Irish PM Leo Varadkar has signalled that the EU will give ‘assurances’ that the UK will not be ‘trapped’ in the controversial backstop arrangements designed to avoid a hard border.

However, French minister for Europe Nathalie Loiseau seemed to dash any hopes of significant concessions today, saying the bloc could only provide ‘political’ statements rather than the legally binding guarantees Mrs May has been pleading for.

Ministers are said to be urging Mrs May to give Parliament the final say on whether the backstop takes effect, as well as the right to exit the Treaty after 12 months if Brussels is not behaving fairly.

A Cabinet source told The Times the government should present the EU with those conditions on a take-it-or-leave-it basis – with no deal the alternative.

However, there are currently few signs that the change would satisfy the DUP and Eurosceptics, or that Brussels would agree to those terms.

Sources have suggested they are instead proposing an ‘exchange of letters’ with Mrs May, setting out the bloc’s intention to conclude a trade deal by 2021.

That timetable would mean the backstop need never come into effect, but experts have voiced scepticism about whether it is possible.

Ireland’s foreign affairs minister Simon Coveney warned MPs that the time for ‘wishful thinking’ is over if the UK wants to avoid crashing out of the EU – and also admitted that his country would be seriously damaged.

Speaking at the Global Ireland 2025 Heads of Mission Conference in Dublin, Mr Coveney said: ‘There is no alternative 585-page agreement waiting to be dusted off.

‘And it is also wishful thinking to ignore the default outcome if nothing else is agreed – that default is a crash-out.

‘Surely now is the time in Westminster for everyone, in government and in opposition, to cast aside unrealistic options based on promises that simply cannot be delivered.

‘If that doesn’t happen quickly, in the absence of that realism, it is the hardliners who think no price is too high to pay for their version of Brexit who will win out to everyone’s cost, including Ireland’s.’

Ms Loiseau insisted the backstop was a ‘last resort’ for the EU as well as the UK.

‘These are political assurances. But there is nothing more we can do. The withdrawal agreement is indeed a good agreement, both for the UK and the EU. We should stick to it,’ she told reporters.

With the prospect of Mrs May’s plan passing the Commons looking vanishingly small, opponents are pushing their own visions of how to proceed.

Labour’s Yvette Cooper and Tory former education secretary Nicky Morgan have tabled an amendment to the Finance Bill today designed to make it harder for the government to push ahead with no deal.

The change would effectively limit the Treasury’s tax-raising powers, making it more difficult to respond to the disruption from crashing out.

As the PM wooed Tory MPs in Downing Street last night, business minister Richard Harrington made clear he will resign if the government backs no-deal after Mrs May’s plan is defeated.

Several Cabinet members, including Justice Secretary David Gauke, have also signalled they would quit – while some Conservatives have insisted they would vote no-confidence in the government to avoid a chaotic departure. 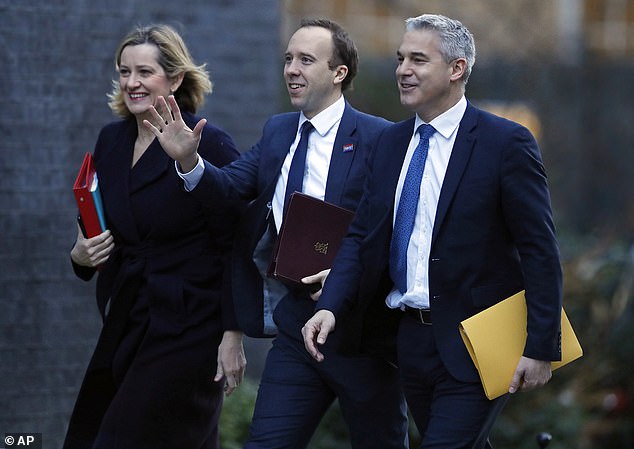 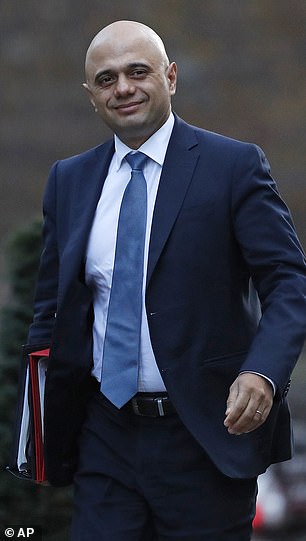 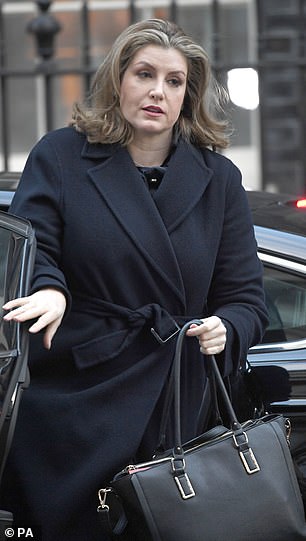 Culture minister Margot James yesterday broke ranks to suggest Brexit might have to be delayed if Mrs May’s deal is voted down.

According to the Telegraph, EU sources say UK officials are ‘testing the waters’ for extending Article 50.

Even if Mrs May’s deal was to pass next week there are serious questions over whether the full legislation would be passed to implement it by March.

Mr Barclay this morning insisted the policy was still to leave the bloc at the end of March, and warned an extension would cause ‘very practical issues’.

Barclay said: ‘It’s not a unilateral decision for the UK. That is not a decision the UK Government could take, it would require the consent of all 27 member states.

‘It would also generate some very practical issues, for example EU parliamentary elections at the end of May.’

He continued: ‘The real question for Members of Parliament who voted to give the public a say through the European referendum in 2016, who voted in large numbers to trigger Article 50, (is) the consequence of triggering Article 50 is you either have a deal and the EU have been clear that the only deal on the table is the PM’s deal. You either have a deal or you have no deal.’

Downing Street has repeatedly dismissed the idea of a delay in the departure date, with Mrs May’s official spokesman saying: ‘The Prime Minister has been very clear on a number of occasions that extending Article 50 is not something we are intending to do.’

Speaking on a visit to Mali, Mr Varadkar said: ‘We don’t want to trap the UK into anything.

‘We want to get on to the talks about the future relationship right away,.. I think it’s those kind of assurances we are happy to give.’

Mrs May last night began a seven-day charm offensive by inviting all Tory MPs and their partners to drinks in No 10.

Those attending included vocal critics such as Boris Johnson.

But hardline Eurosceptic MPs warned they would not vote for the deal even if Mrs May achieved a breakthrough on the Irish backstop.

Sir Bill Cash, chairman of the Commons European scrutiny committee, said the backstop was ‘not the whole story by any means’.

He added: ‘Reassurances are going to get nowhere and they are certainly not going to convince anybody who’s thinking hard about this when it comes to the vote next week.’

Fellow Eurosceptic Sir John Redwood said opposition to Mrs May’s deal ‘goes way beyond the unacceptable Irish backstop and includes paying huge sums of money with nothing nailed down over the future partnership’. 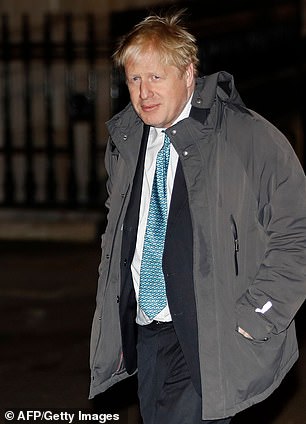 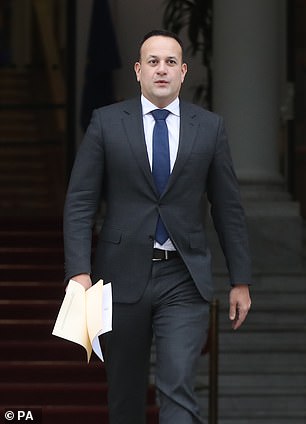 Boris Johnson (left) was at a reception in Downing Street where Theresa May tried to win MPs over to her Brexit deal. Leo Varadkar (right) has said the EU can give assurances over the Irish border backstop 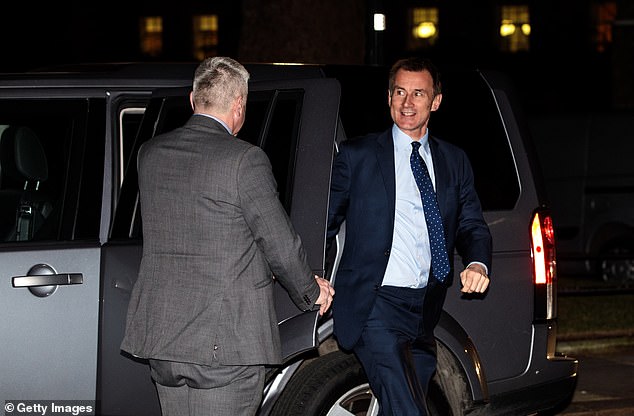 Daisy Lowe oozes glamour in a plunging dress as she continues to flaunt new blonde bob in London
The simple test that could have saved newborns like Tommy
Eurovision Song Contest 2019, by Jim Shelley
Thug couple kick and stamp on elderly man in shocking city centre attack as 10 bystanders watch
Twisted teen who brutally hacked girl to death worked as teaching assistant at Oxford primary school
Richard Branson's Virgin Orbit will conduct key rocket test TODAY over the Mojave Desert
Depressed pilot of MH370 was in control until the end, investigators believe
Woman, 24, finds love with a man 25 YEARS her senior