Jeremy Clarkson has launched a bitter tirade against the BBC, claiming it’s now so politically correct men don’t stand a chance of getting top jobs.

The star – who was dropped by the broadcaster in 2015 after he hit a Top Gear producer – said ‘anyone who has got a scrotum’ won’t be hired by the corporation.

Describing himself as a ‘big old dinosaur’ he said: ‘If I ran the BBC, it would be better. I’d make programmes for everybody, not just seven people in Islington.

‘It’s become so up itself, suffocating the life out of everything with its nonsense need to be politically correct.’ 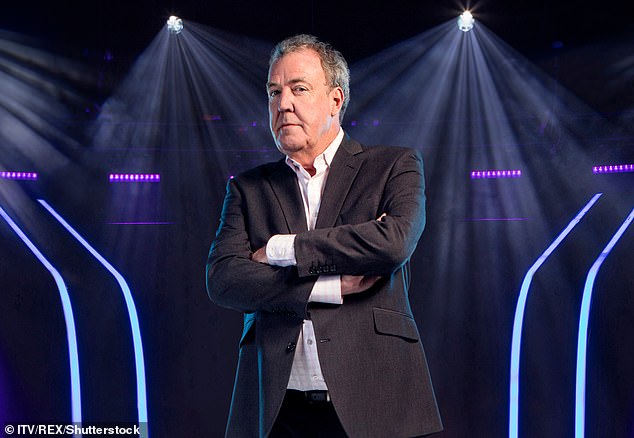 Jeremy Clarkson has launched a bitter tirade against the BBC, claiming it is ‘up itself’ and ‘suffocating everything’ with its need to be politically correct

Referring to the appointment of Fiona Bruce as the new host of Question Time, he said: ‘Honestly, poor old Nick Robinson going for an interview… what a waste of petrol that was. No chance he’s going to get it. Anyone who has got a scrotum, forget it. They just aren’t giving jobs to men at the moment.

‘There is an argument that it’s been all-men for a long time, so what’s wrong with it being all-women for some time? I get that. That’s fine. We just, as men, have to accept we’ve had it. Let’s just go down the bar.’ 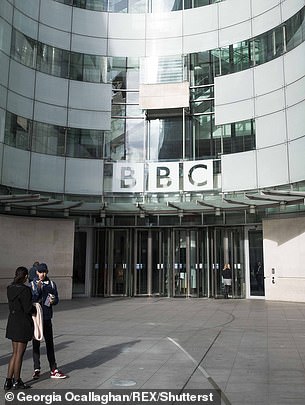 Robinson was the only man to audition for Question Time after David Dimbleby stepped down.

He was on a shortlist that included Bruce, Kirsty Wark, Emily Maitlis and Samira Ahmed.

He added: ‘I had a very happy time at the BBC and I care very much about it. I’d be sad if it got knackered by a few unwise Corbynites. I may be wrong. Maybe I’m just a big old dinosaur. The world isn’t mine any more, it belongs to people my children’s age [daughters Emily, 24, and Katya, 20, and son Finlo, 22].

‘They live in a secret world, on their phones and social media. I listen to them talking and think, “This is an alien planet. I’m William Shatner and I’ve just beamed down somewhere”.’

He has since moved in a £160million deal to Amazon Prime Video, where he has released three series of The Grand Tour with his former BBC co-stars Richard Hammond, 49, and James May, 55.

BBC Radio 4 host Jane Garvey has branded Radio 2 ‘old-fashioned’ for its previous lack of female presenters in its daytime schedule.

But the Woman’s Hour presenter congratulated it on ‘tip-toeing tentatively into the New Age’ by giving two top jobs to Zoe Ball and Sara Cox.

Lamenting why the station had previously gone so long without a female primetime host, Miss Garvey, 54, wrote in Radio Times: ‘Strange, though, that Radio 2 should be such an old-fashioned outlier: the other BBC radio networks don’t seem to have a problem finding women who can find and keep an audience.

‘Just don’t get me started on what they pay them…’

‘I still care about Top Gear very much,’ he told Radio Times. ‘I dreamt it up, and everything on it is something I came up with.

‘I haven’t watched it [since his 2015 departure]. I can’t bear to look. It would be like going to visit your baby after it’s been adopted by someone else, and pressing your face up at the window. Anyway, The Grand Tour is the latest incarnation of what would have been Top Gear.’

Speaking about the next series of Top Gear, which will see Freddie Flintoff and Paddy McGuinness as hosts, he said: ‘If I was in charge of Top Gear now, I’d send the new presenters away to a desert island for a year so they could get to know one another really, really well, to get the same dynamic we have.’

n Grand Tour co-star Richard Hammond claims more female presenters are carrying on in the TV industry as they age.

Hammond said it was a ‘tragedy’ that it was ‘still easier’ for men to age publicly, adding: ‘If you look there are more female actresses and presenters who are carrying on and people aren’t commenting that you have lost your rosy fresh youthful looks.’

Bethenny Frankel cuts a chic form in studded denim in NYC
Lawsuit that lays bare the longest feud in rock: tensions in Fleetwood Mac are about to EXPLODE
Worst dressed celebrities at Oaks Day 2018
Lily Allen's former public school becomes first to offer discount on its £38,000 a year fees
Alex Oxlade-Chamberlain is complaining about a MANSION SHORTAGE in Cheshire
FBI and Italian police target Gambino and Inzerillo Mafia in Sicily
EastEnders star Sandy Ratcliff, 70, died from an accidental overdose
Italy's death toll of doctors rises to 44 in coronavirus crisis