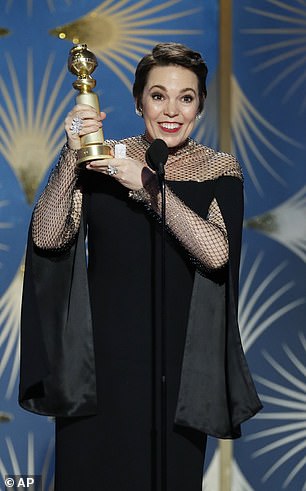 Olivia Colman shot to serious Oscar contender status after being crowned queen at the for her wacky portrayal of a monarch.

But the British actress hid a secret under her swanky Stella McCartney gown, the Daily Mail can reveal.

As she arrived at a celebratory party in Los Angeles on Sunday night, onlookers wondered why her publicist kept squatting down to smooth over the train of the sleek black dress.

It soon emerged that she was wearing a pair of unsightly, yet comfy, Ugg boots – to give her aching feet a rest after being in heels for hours at the ceremony.

The 44-year-old was named best actress in a musical or comedy for her role as Queen Anne in acclaimed film The Favourite on what was a good night for British talent.

Bohemian Rhapsody, the movie about rock band Queen, was best drama film and its star Rami Malek, who played Freddie Mercury, was best actor in a drama. He was congratulated by band members Brian May and Roger Taylor. 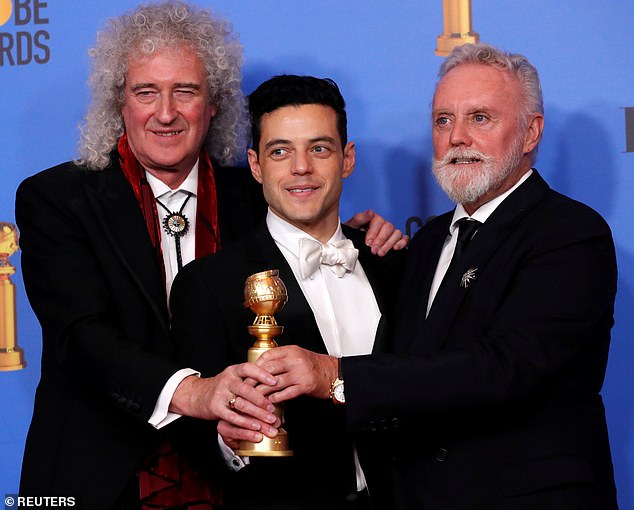 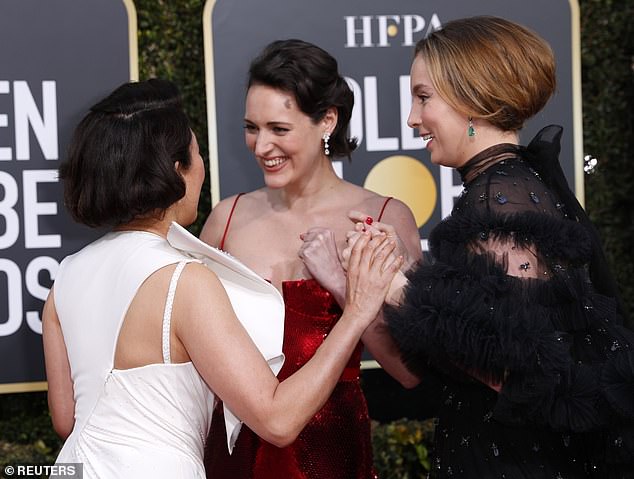 You did it! Sandra Oh, left, Phoebe Waller-Bridge and Jodie Comer at the Golden Globes

The hit BBC series Killing Eve was recognised with a best actress in a TV drama award for Sandra Oh, who was congratulated on stage by her co-star Jodie Comer and the show’s screenwriter, actress Phoebe Waller-Bridge. 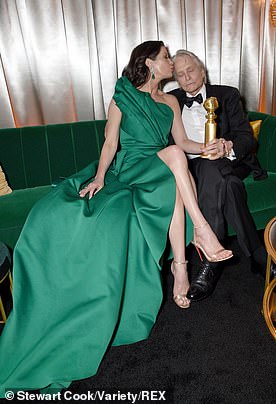 Michael Douglas looked like he’d rather be tucked up in bed at home than partying at the Golden Globes.

The actor, 74, rested his eyes at the Netflix party on Sunday as his wife Catherine Zeta-Jones, 49, wearing a dramatic off-the shoulder

Elie Saab emerald gown, gave him an affectionate kiss on the head.

Douglas won a best TV actor Globe for his role in Netflix show The Kominsky Method.

Ben Whishaw was best supporting actor in a limited series or TV movie for his role as Norman Scott in the BBC’s A Very English Scandal, about the Jeremy Thorpe affair.

Whishaw, 38, dedicated his award to Mr Scott, saying that he ‘took on the establishment with a courage and defiance that I find completely inspiring’ and hailing him as ‘a true queer hero and icon’.

In her own acceptance speech, Colman showed her natural aptitude for comedy.

‘Cor blimey, thank you so much,’ she said. ‘I’m not going to cry because my entire table will point and laugh at me as I’ve been crying all evening.’

She had the audience in stitches as she paid tribute to her co-stars, Britain’s Rachel Weisz and American actress Emma Stone, who play rival courtiers in The Favourite, labelling them ‘ma bitches’.

Colman said that every second of working with them ‘was such a joy and I was so sad that it finished’, adding: ‘I would like to tell you how much this film meant to me but I can’t think of it because I’m too excited. I just had a f****** blast … I promise I will keep on enjoying this, because it’s amazing.’

Looking into the camera, she held up her Globes statuette and said to her husband Ed Sinclair and their three children back in London: ‘Ed and the kids, look! Yay!’

Glenn Close won the best actress in a film drama category for her role in The Wife, beating Lady Gaga who had been considered the front-runner for A Star Is Born.

It is likely that Colman, Close and Lady Gaga will all receive Oscar nominations when they are announced on January 22.

Eyeing up my job, Mr Elba?

He’s been hotly tipped to take over as James Bond, even though the current 007 is still in the role.

So Idris Elba, 46, had much to laugh about when he found himself alongside Daniel Craig, 50, at the Golden Globes.

The Luther star posted a picture of the pair at the Los Angeles ceremony, in which both men jokingly exchange troubled glances.

Elba, who has been known to tease his social media followers about the potential role, captioned the humorous picture: ‘Awks…’ 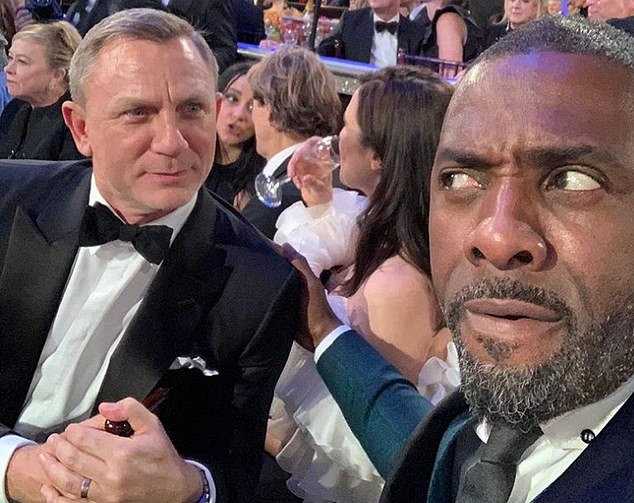 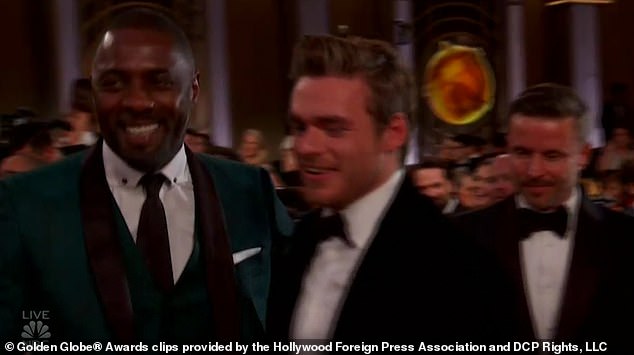 … and Elba with Richard Madden, also tipped for Bond role

He has been the frontrunner to take over as Bond since a leaked email from Sony producer Amy Pascal revealed that he was in the running in 2014.

Elba’s potential rival for the Bond role, Richard Madden, 32, was also at the ceremony and picked up a best TV actor award for the BBC’s Bodyguard.

Elba was seen giving Madden a friendly hug as he went up on stage to collect his trophy.

Craig was at the ceremony to support his wife Rachel Weisz, 38, who had been nominated in the best supporting actress category for her role in period movie The Favourite.

They might be pop rivals, but Lady Gaga appeared to copy Madonna as she won the best song award at the Globes.

Gaga, 32, in a strapless Valentino gown and a diamond necklace, seemed to echo Madonna’s 1984 Material Girl video as she was kissed by fellow songwriters Mark Ronson, Andrew Wyatt and Anthony Rossomando.

While Shallow from her film A Star Is Born was a winner, Gaga lost out on the best actress title for her lead role in the movie. 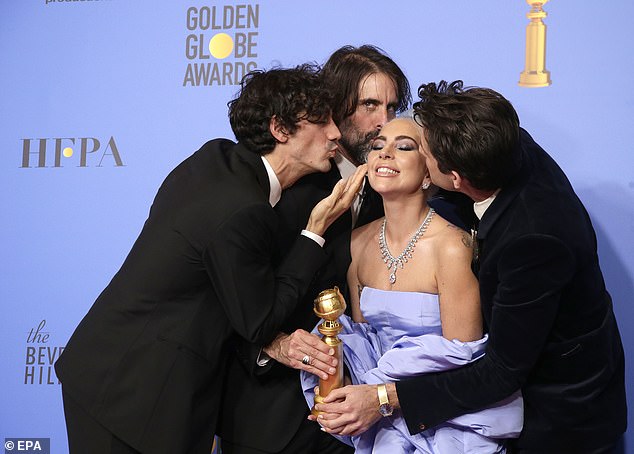 Gaga, 32, in a strapless Valentino gown and a diamond necklace, seemed to echo Madonna’s 1984 Material Girl video as she was kissed by fellow songwriters Mark Ronson, Andrew Wyatt and Anthony Rossomando 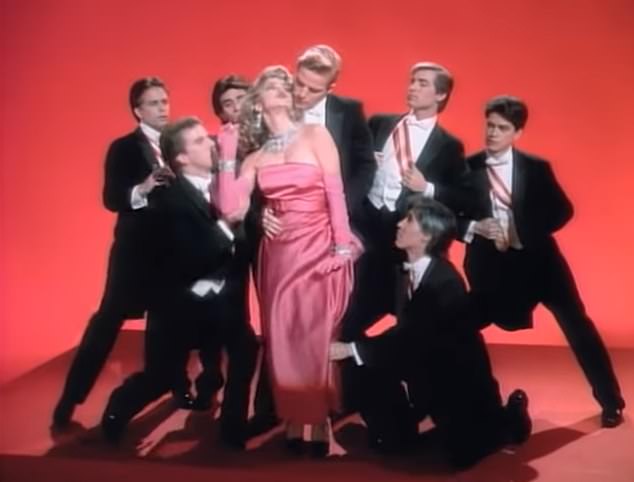 Dancing On Ice: Jane Danson's husband chokes back tears during routine after her fainting spell
WAG Phoebe Burgess makes a joke about 'mum life' with kids Poppy, 2, and newborn Billy
Love Island's Anton Danyluk and Belle Hassan share a kiss as they return to Mallorca
Nick Cummins DEFENDS Instagram models while insisting they're a 'beacon of light to guide us'
Vicky Pattison hits back at a troll who uses a vile slur by telling them to 'get a hobby'
MAFS expert Mel Schilling reveals the early warning signs of 'micro-cheating'
Love Island's Amber Gill DENIES having a bum lift as she posts snap of her VERY peachy posterior
Gigi Hadid leaves Isabel Marant's Paris Fashion Week Show