A mob of protesters were branded vile today after they interrupted a live TV interview to hurl Nazi chants at Tory MP Anna Soubry.

Ms Soubry, a leading Remainer, was being quizzed about her views on the Prime Minister’s deal on the when the mob began shouting out abuse.

As the MP for Broxtowe was speaking on College Green outside Parliament, the gang – who were just out of camera shot – shouted ‘Soubry is a liar’.

Ms Soubry, a former business minister, broke off from the interview to condemn the noisy demonstrators.

She said: ‘I do object to being called a Nazi actually. I just think this is astonishing – this is what has happened to our country, actually.’

Gesturing to the mob, she added: ‘This is what has happened to our country – but let’s try and move on and be positive about things.’ 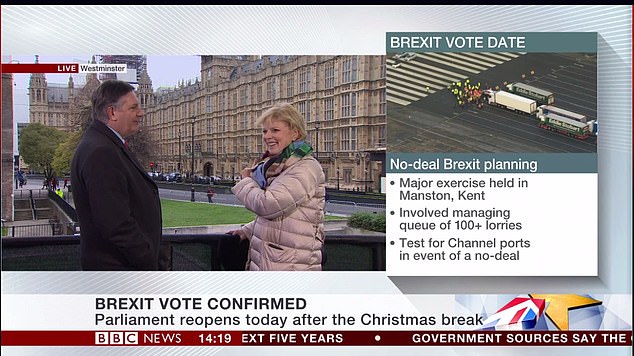 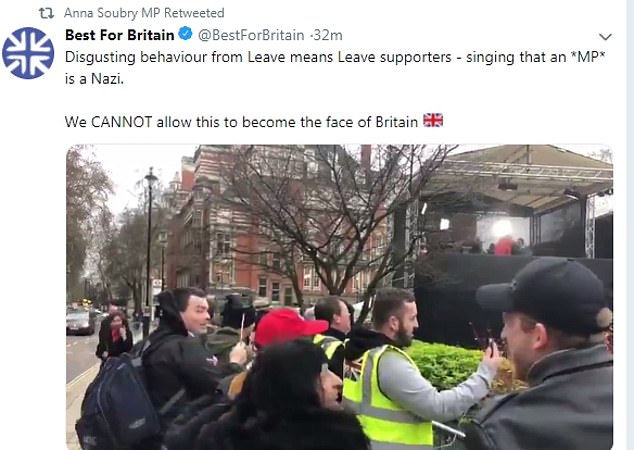 Ms Soubry, a leading Remainer, was being quizzed about her views on the Prime Minister’s Brexit deal on the BBC when the mob began shouting out abuse (pictured, the protesters)

BBC presenter Simon McCoy said: ‘Apologies too if you are offended to what you are listening to.’

The rest of her interview was interrupted with loud heckles from the mob who s shouted ‘liar liar liar’ as she gave her views.

She was mobbed by the gang of men as she walked back to Parliament after the interview, who aggressively heckled and shouted at her.

Theresa May’s official spokesman condemned the abuse saying: ‘Nobody involved in politics should be subject to intimidation or harassment while they are trying to perform their daily activities.’

Tory MP Nick Boles raised the incident in the Commons Chamber this afternoon – and demanded that action is taken to protect the safety of MPs.

And he criticised police for not arresting the gang of protesters as they hurled the abuse, writing on Twitter: ‘Far be it from me to tell the police their job but I thought that threatening violence was an arrestable offence under the Public Order Act 1986.’

Speaking in the Commons, he tore into the ‘threatening behaviour’ of the demonstrators towards Ms Soubry and asked Commons Speaker John Bercow to work with the parliamentary authorities to see if the police are doing enough to protect MPs.

Mr Bercow said: ‘I have been made aware of recent incidents involving aggressive and threatening behaviour towards members and others towards assorted protesters who have donned the yellow vests used in France.’

He added: ‘I take this issue very seriously, so I am sure, do the police, who have bene made very well aware of our concerns.’ 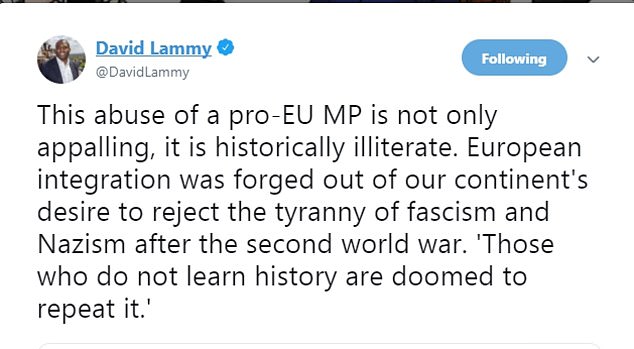 He added: ‘I am concerned at this stage about what appears to be a pattern of protests targeted in particular…at women.’

Tory MP David Lammy tweeted ‘This abuse of a pro-EU MP is not only appalling, it is historically illiterate.

‘European integration was forged out of our continent’s desire to reject the tyranny of fascism and Nazism after the second world war.

‘Those who do not learn history are doomed to repeat it.’

Labour MP Wes Streeting tweeted: ‘Abuse, harassment and attempts to intimidate politicians and journalists are an affront to our democracy.

‘See Anna Soubry, Owen Jones and others today. There’s always a place for protest, but never a place for intimidation.’

Labour MP Anna Turley tweeted a link to a clip of the incident with the words: ‘This is not my Britain.’

Ms Soubry tweeted to condemn the protesters after she had finished her interview.

She wrote: ‘Apparently MPs & politicians are meant to accept it as part of the democratic process. 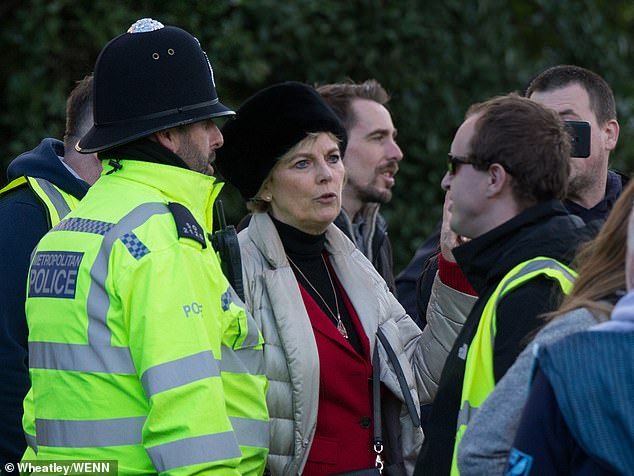 ‘I fail to see why journalists and technicians should be subjected to the same abuse & intimidation as the police stand by and do nothing.

‘They tried to stop me getting into Parliament.’

A group of anti EU protesters gathered on College Green in Westminster – where many of the press interviews around Brexit are held – have harassed journalists there before.

A few weeks ago Guardian columnist Owen Jones was heckled by protesters as he gave his views on politics and Brexit.

Eloise Todd, the head of Best for Britain – the anti Brexit campaign group Best for Britain – said: ‘It’s downright disgusting to see people baying at an MP like that and throwing around such offensive words simply because they disagree with her position on Brexit. It’s awful and it turns my stomach.

‘Britain is a place for vigorous and vibrant debate, but, it seems today it turned into pure hate for a few mindless thugs.

‘This kind of evil discourse belongs in the sewer and not a stones throw from Parliament.’

Apology issued as 1,761 women not invited for final...
Police probe GP's ex-wife after he was left disfigured by two knifemen
Woman with excruciating swelling condition becomes a marathon runner and competitive body-builder
Love Island Wardrobe Secrets: How fast-fashion stylists behind stars' skimpy wardrobes
How you should briskly walk 15,000 steps a day to get the maximum health boost
Former Labour MP Andrew Miller dies at the age of 70, four years after bowing out of politics
Professor Frans de Waal argues our fellow mammals are just as emotional as we are
Boohoom slammed by keyworkers for selling face masks reading "quarantine queen"