A millionaire who discovered the three boys he raised as his sons were not his own last night offered a £5,000 reward to find their real father’s identity.

Richard Mason, 55 – who was told by doctors that he was infertile in 2016 – believes the children were the product of his ex-wife Kate’s affair.

After initial denials, she admitted an on-off affair with a colleague during their 20-year marriage, but refused to name him and said they always used contraception.

The co-founder of price comparison site MoneySupermarket.com had been a doting father to the boys.

The eldest is 23 and a budding businessman, while the 19-year-old twins are at university. Yesterday Mr Mason said the shock of discovering the truth left him contemplating suicide. 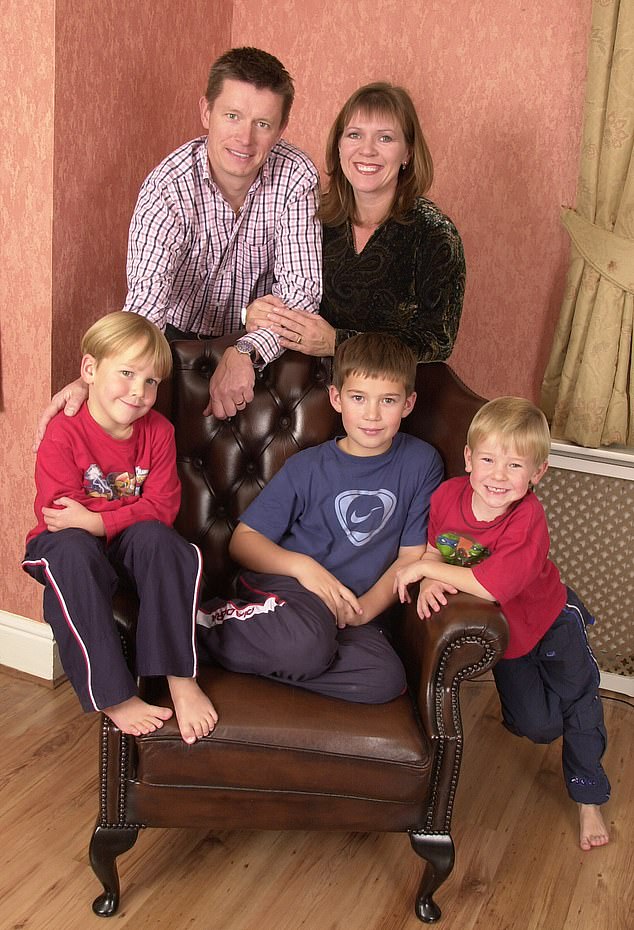 Richard Mason, pictured with ex-wife and sons in 2014, has offered £5,000 for information to help find the biological father of the three boys he raised as his own

‘I still regard them as my boys even though I’m not their biological father, and I miss them so much,’ he added. Mr Mason is offering £5,000 for information to help him identify the real father, who is not thought to have contributed financially to their upbringing.

Despite Kate’s insistence on giving all three boys Jewish middle names – even though neither of them followed the faith – and refusal to have them christened, he had no idea he was living a lie.

It was only in 2016, almost ten years after they split up, that doctors told him he had cystic fibrosis. At the time he and second wife Emma were trying for a baby, but the doctor warned him the genetic condition meant he was infertile. Mr Mason recalls saying: ‘You must have got the diagnosis wrong because I’ve got three sons.’

But the consultant told Mr Mason that the only father with cystic fibrosis he had ever known later discovered he had been duped by his cheating partner.

After he quizzed Kate, she sent him a message insisting: ‘Of course the boys are yours, no matter what the science might suggest.’

Shortly after, according to the Mail on Sunday, she admitted to an affair with a work colleague at Barclays in the 1990s but insisted she had genuinely believed her husband was the boys’ father. 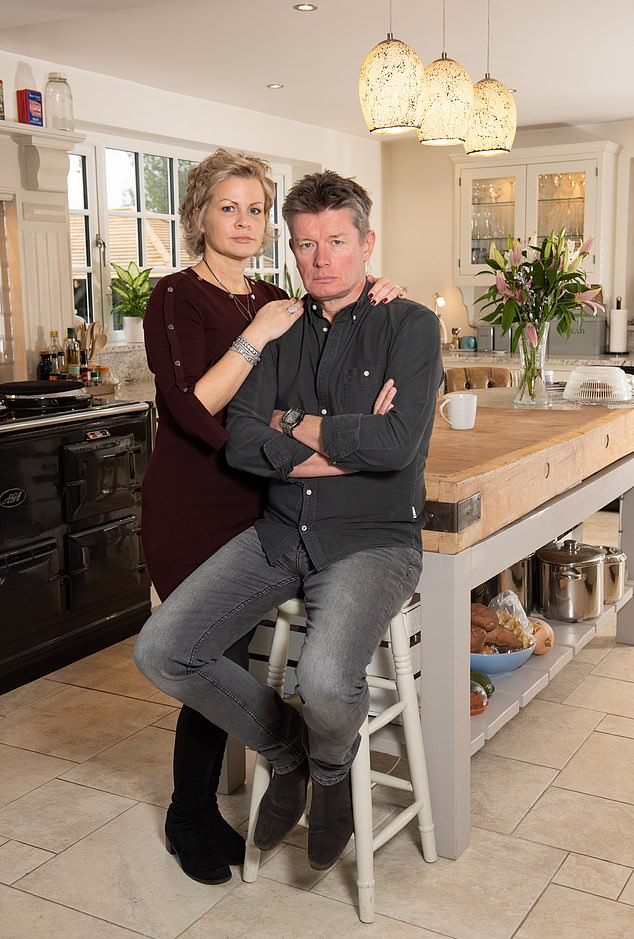 Mr Mason, pictured with wife Emma, said: ‘I still regard them as my boys even though I’m not their biological father, and I miss them so much’

Mr Mason launched a paternity fraud claim and demanded she pay back some of the £4million divorce settlement which funded their private education, as well as her new life in a seven-bedroom home.

Now, in what is thought to be the first case of its kind, 54-year-old Kate has agreed to repay him £250,000 in an out-of-court settlement. However, the bitter dispute has almost destroyed his relationship with the boys.

The eldest vowed never to speak to him again if he took legal action against his mother, who has a new partner, while only one of the twins replies to his messages.

Mr Mason is struggling to come to terms with being childless, while Emma is unable to conceive following a battle with cancer.

Yesterday at his £650,000 detached home in Rhos-on-Sea, near Llandudno, he told of his anguish. ‘Imagine being told you are going to die and your three sons are not your own – my life fell apart,’ he said. ‘But what stopped me was the love I feel for Emma. She is my soulmate, and has got me through all this trauma.’

A man who answered the intercom at the former Mrs Mason’s £1million home near Uttoxeter, Staffordshire, yesterday said she was on holiday, while her sons did not respond to messages.

Burglar who tied up girls and mocked police with graffiti is jailed for 12 years
We are British Jews participants talk about the anti-Semitic abuse they have suffered
Stone throwers face different fates across the globe
Christian Bale thanks 'Satan' for inspiration on playing Dick Cheney as he accepts his Golden Globe
Kylie Jenner becomes youngest self-made billionaire of all time
EDEN CONFIDENTIAL: Lady Pamela Hicks reveals guest died after lunch at her family's stately home
Family who lived in Dutch cellar for nine years are discovered
Fury as key workers are forced to wait 20 MINUTES to cram on to London's packed Tube trains AGAIN