The research, by an international team including professors from University College (UCL), may challenge prevailing beliefs that poverty, religious upbringing or mental illness are dominant causes of religiously-inspired violence.

The researchers used ethnographic surveys and psychological analysis to identify 535 young Muslim men in and around Barcelona – where -supporting jihadis killed 13 people and wounded 100 more in the city centre in August 2017.

Of those 535, 38 men, second-generation immigrants of Moroccan origin who had already ‘expressed a willingness to engage in or facilitate violence associated with jihadist causes’, agreed to have their brains scanned. 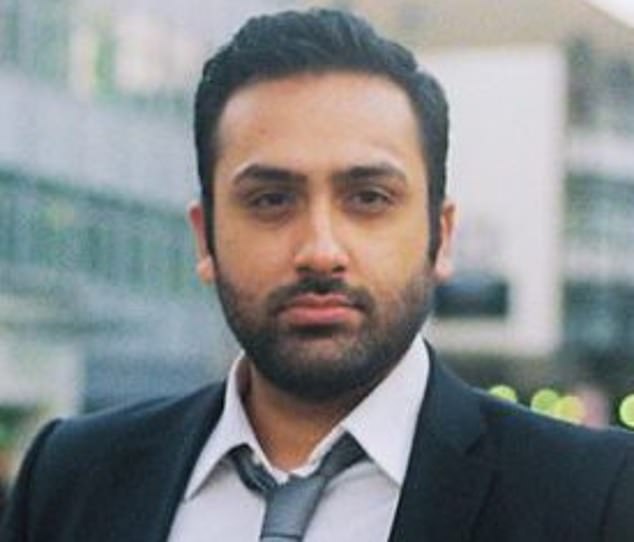 The study’s co-lead author, Nafees Hamid of UCL, pictured, said the men started treating important causes like ‘sacred’ ones after the exclusion exercise – meaning they were more willing to fight and die for smaller stakes

Scientists scanned the men’s brains while asking them questions about behaviour and policies they considered ‘inviolable’ – such as introducing Islamic teaching in schools, or the unrestricted construction of mosques.

Then the men played a ball-throwing game with fellow Spaniards, but were abruptly and deliberately excluded from being passed the ball.

Their brains were scanned again after the exclusion exercise, and researchers found that the neurological impact of being excluded meant that issues they had previously considered inviolable became far more important and were now deemed similar to ‘sacred’ and worth fighting and dying for.

His team linked their findings to previous research by the team on Israel-Palestinian, India-Pakistan and Kurds-Isis conflicts, which found that when values deemed ‘sacred’ are violated, hostility becomes intractable.

He said the findings should affect national anti-extremism policies worldwide, adding: ‘In addition, social exclusion may be a relevant factor motivating violent extremism and consolidation of sacred values.

‘If so, counteracting social exclusion and sacralization of values should figure into policies to prevent radicalization.’

Mr Hamid told The Observer: ‘This latest research has shown how values start to become sacred, and indicates that social exclusion makes non-sacred values behave like sacred values, which in turn makes people recalcitrant and prone to violence.

He called for the study, a multi-university project involving scientific research organisation Artis International and partly funded by the US Department of Defence, to be used to help ensure social exclusion was factored into policies to prevent radicalisation.

He added: ‘This finally dispels such wrongheaded ideas. The first ever neuroimaging study on a radicalised population shows extreme pro-group behaviour seems to intensify after social exclusion.’ 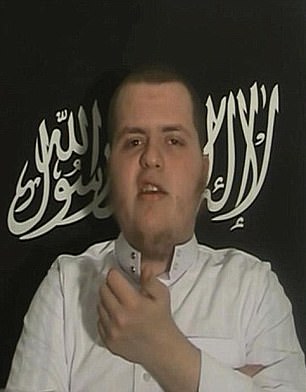 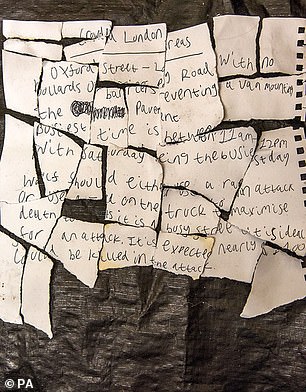 Lewis Ludlow, a former Royal Mail worker from Rochester, left, plotted a vehicle attack on Oxford Street or Madame Tussauds (evidence right) while, at the same time, meeting officials from the de-radicalisation programme. Scientists behind the new study say policymakers should look again at the cause of violent jihadi behaviour

It follows the revelation that a British-born Muslim was planning a terrorist outrage on Oxford Street, all the while keeping 17 17 appointments with the government’s de-radicalisation programme, Prevent.

The 27-year-old then tried to join a new ISIS group in the Philippines, but was stopped from travelling and so began hatching plans for an attack in London.

He plotted a vehicle attack on Oxford Street or Madame Tussauds while, at the same time, meeting officials from the de-radicalisation programme.

A court heard that among the notes Ludlow made for himself, then tore up, was one which read: ”Crowded London Areas: Oxford Street – long road with no bollards or barriers preventing a van mounting the pavement. ‘Busiest time is between 11am – 12pm with Saturday being the busiest day.

‘Wolf should either use a ram attack or use the truck to maximise death. It is a busy street, it is ideal for an attack. It is expected nearly 100 could be killed in the attack.’

Giving evidence, Ludlow, who converted to Islam at 16, told how he dropped out of school after he was bullied for nine years.

He said: ‘I was a loner. I was on my own and it was sad. People would say they found me too strange. It was really depressing. I felt everyone hated me and I thought I would be better off dead.’

Princess Eugenie wears Queen's emerald tiara for royal wedding
TOM LEONARD: Kevin Spacey is back in his most menacing, malevolent and creepy scene of all
Puppy born with upside-down paws forcing him to army crawl to move undergoes life-changing surgery
Businessman seen holding gun over two dead elephants claims he killed them in self-defense
Former gang members in an El Salvadorian prison cross through their distinctive tattoos
Antonio Brown posts 2018 text exchange showing his doctor found viral farting video 'funny as s***'
Donald Trump is very 'concerned' that he's been exposed to people with coronavirus
Truckers protest against freight rates in Washington DC and anti-lockdown rallies continue across US