Rob Schneider on Friday urged fans to boycott the Academy Awards if they didn’t have Kevin Hart as host after the comedian refused to apologize for old homophobic jokes and instead stepped down from hosting the huge gig.

Schneider posted a series of tweets after Hart’s interview with Ellen DeGeneres aired and the popular talk show host received widespread backlash for dismissing those who have criticized the comic as ‘haters’ and ‘trolls’.

Actor Schneider gushed about the daytime TV host and tried to get the hashtag #BoycottAcademyAwards retweeted as much as possible, tweeting: ‘Ellen, I’ve always loved you! I love you even more now. A voice of reason in a world of idiots.’

The screen star called those who don’t agree with him ‘morons’ and ‘c***s’, compared political correctness to fascism and insisted comedians get a pass to say offensive things.

The 55-year-old tweeted to approximately 706,000: ‘Comics are the ones who are supposed to say the horrible things we all think but don’t.’

But Hart himself didn’t appear so passionate about getting the chance to present the 2019 show earlier on Friday. 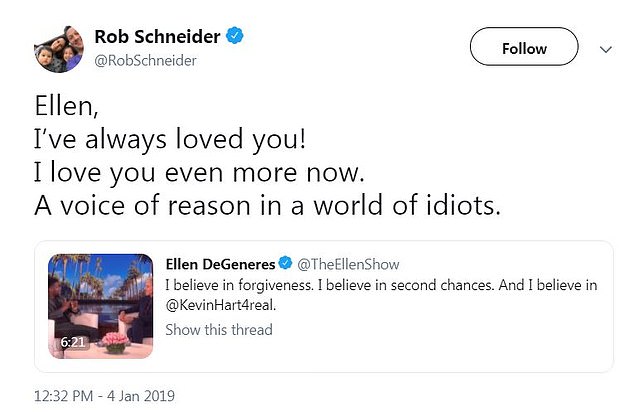 While recording a podcast with , he agreed comedians are ‘the biggest risk-takers’ but told the 40-minute Playback program: ‘Would I ever do it? No, it’s done. It’s done… I don’t believe in going backwards.’

Although he made it clear there was ‘no ill will toward the Academy’ the movie star suggested the only way to win him over was to give him a gong.

‘When I go on that stage, it will be because I’ve somehow figured out a way to win the Oscar,’ Hart said. ‘Somehow I’ll get to the stage but it’s not going to be in this way because it just comes with such a weird cloud at this point.’

Reiterating that he was an immature comic in the past, he blamed the media and internet for not highlighting his past apologies about the offending tweets enough.

However he seemed to no longer want any Oscars attention on him during the podcast interview.

‘I stepped down because I’m not going to allow this to tarnish an amazing night for the other actors and actresses that are going to be on stage that night,’ Hart continued. ‘It shouldn’t be about Kevin Hart and his tweets of old. And I’ll state it again, to anybody I’ve hurt, I’m sorry.’

The chat was just before veteran talk show host DeGeneres revealed that she has been lobbying the Academy of Motion Picture Arts and Sciences to again extend an offer to Hart to host the 91st Oscars ceremony next month, as she confessed she ‘really wants him to host’.

Two days after he was tapped for the high-profile gig, Hart backed out when some of his tweets deriding homosexuals from a decade ago resurfaced.

But DeGeneres, who is openly gay, on Friday made a full-throated defense.

‘There are so many haters out there,’ DeGeneres said, referring to Hart’s detractors. ‘Don’t pay attention to them. That’s a small group of people being very, very loud. We’re a huge group of people who love you and want to see you host the Oscars.’

She later doubled down on her argument, saying that ‘trolls’ are going to win if Hart does not host the Academy Awards. 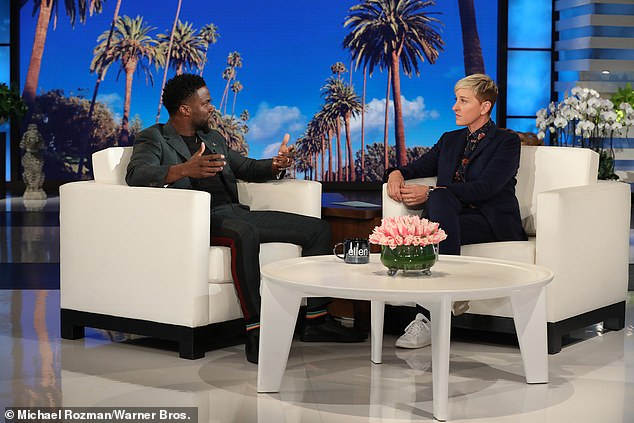 Shock: Kevin Hart has revealed he is still debating taking the hosting role at the Oscars despite stepping down last month due to a scandal over historic tweets

After the video of DeGeneres’ interview with Hart went up online, Twitter exploded with messages accusing Ellen of turning her back on the LGBTQ community for the sake of her celebrity pal.

‘I can think of at least 50 openly gay up and coming comedians who deserve your awesome platform more than douche canoe Kevin and his blatant push for the Oscars gig,’ actor Harry Cook tweeted.

User Cindi Melendrez wrote: ‘I have yet to read or hear a heart felt apology from KH? You should have asked him some tough questions instead of giving him a free pass because he’s your pal. Everyone does deserve a 2nd chance BUT they need to show they are truly sorry for the initial “mistake.”‘

Another post read: ‘So disappointed. You give another celebrity like you a pass because that’s what you all do: Protect each other. People, especially the rich and famous, need to be held accountable. If this had been a regular person on a job interview, he would never, ever be called back. Shame.’ 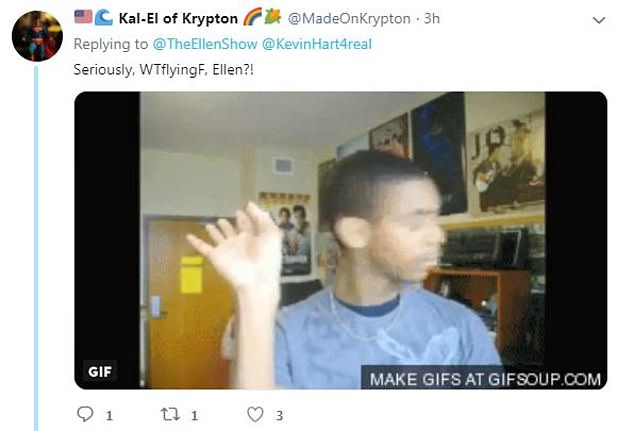 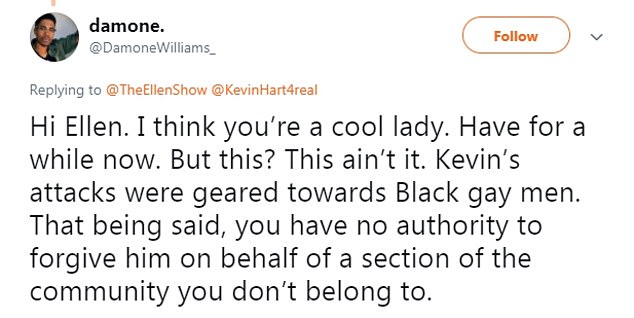 A third chimed in: ‘Nah Ellen – now is not the time. If he can show support, CONTINUOUS support, of the LGBT community then maybe sometime far in the future. But he has debts that need to be paid and sounding sad and sending a tweet is not how those are repaid.’

One segment of the LGBTQ community that took particular umbrage at DeGeneres’ stance on Hart’s past remarks were gay African-American men, who argued on Twitter that Ellen had no right to speak on their behalf, seeing how most of Hart’s homophobic rants were aimed at them.

‘Ellen, this really wasn’t your place to offer forgiveness because you weren’t harmed in all of this,’ journalist and activist George M Johnson said in a Twitter video Friday. ‘So to allow Kevin Hart to come on your show, basically speak for six minutes straight, uninterrupted, where you don’t challenge him on any of the things he said is just a disservice.’

Others, however, expressed support for both DeGeneres and Hart, praising the talk show host for teaching a lesson in forgiveness and insisting that the comedian was genuinely contrite.

‘You never cease to amaze me, Ellen, for always keeping it real,’ a fan tweeted. ‘You are on the right side of this. Kevin has apologized but he has done better than that. He learned about the unintended consequences of word choice and has altered his language to better reflect his beliefs.’

Another supporter sounded a similar note: ‘The way you handled this just reinforces that you have a big heart and are such a reasonable, fair, rational person. So many people jump on bandwagons, close their eyes, and hang on. You’re not a side or an affiliation. You’re a person. And you treat others that same way.’ 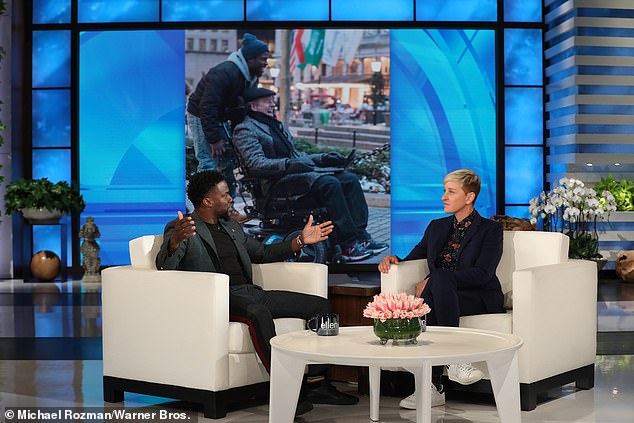 Open and honest: Appearing on Friday’s episode of Ellen DeGeneres’ show, the legendary chat show star revealed she has been lobbying the Academy in the hope of his return to the role as she confessed she ‘really wants him to host’ 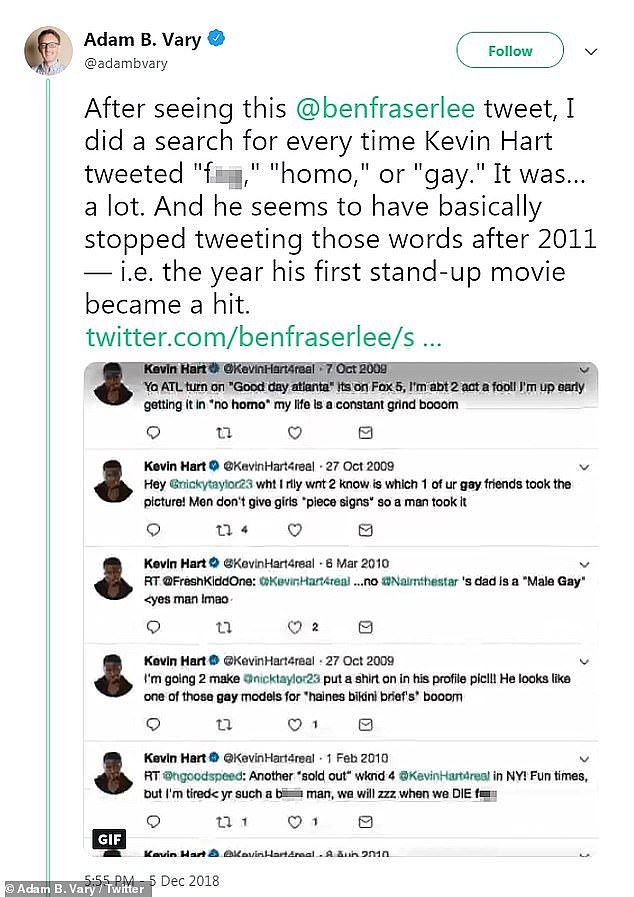 Resurfaced: Internet users searched through the funnyman’s tweets to discover his excess of vile slurs prior to becoming famous in the mainstream 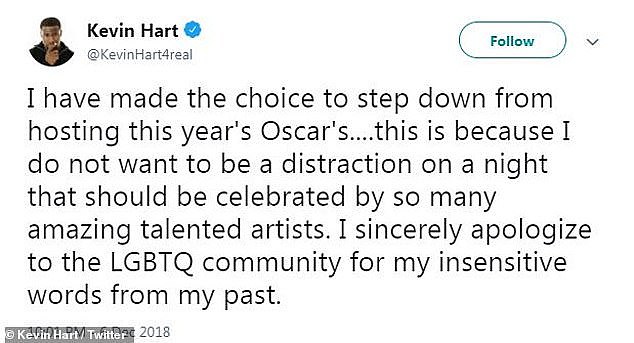 Not interested… As the controversy rumbled on, he tweeted shortly after ‘I have made the choice to step down from hosting this year’s Oscars’

During the controversial sit-down, DeGeneres told Hart that she has contacted the Academy and was told that organizers of the Oscars ceremony still want him to host and are interested in making it happen.

In response to her support, Kevin said: ‘Leaving here I promise you I’m evaluating this conversation. This is a conversation I needed to have, I’m glad I had it here. I’m glad it’s as authentic and real as I could’ve hoped it would be.’

Sources told : ‘There has been a steady stream of buzz that things might work out between Kevin and the Academy. The Academy never really axed him – they wanted him to apologize – he wouldn’t, and then he was the one to drop out…

‘Everyone has noticed that it’s not like the Academy just pivoted to someone else; Kevin is clearly well aware that the job is still wide open. But meanwhile, he has needed to do his own clean-up work in terms of his image after all of this.’ 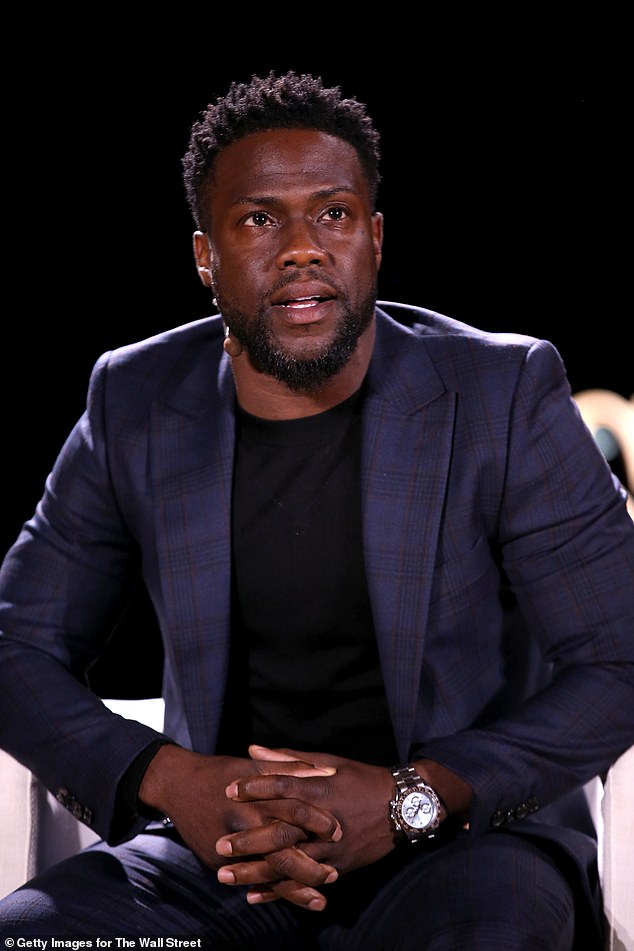 Shock reaction: Kevin responded to the ultimatum in the video asserting that he chose to ‘pass on the apology’ because he had ‘addressed this several times’

The comedian has since deleted the tweets, but that wasn’t before screen captures began circulating online, gaining widespread criticism.

Following the historic reveal, Kevin shared an Instagram video in which he confessed that the Academy of Motion Pictures Arts and Sciences had given him an ultimatum: ‘Apologize for the comments or they would seek a new host’.

Less than two hours later the star changed his tune, issuing an apology to the LGBTQ community along with his resignation as Oscars host. 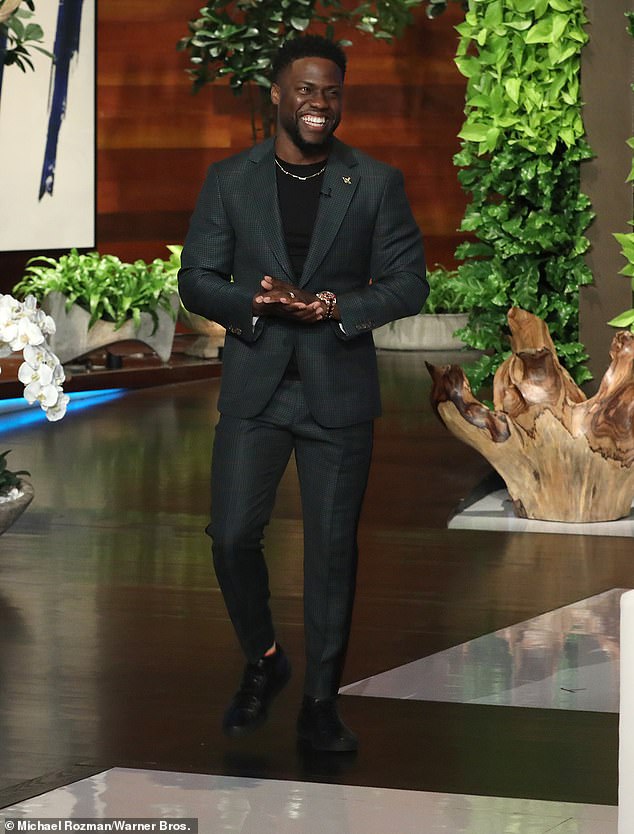 The big reveal: Since then, there hasn’t been any word from the Academy, with Deadline reporting that their, ‘highly reliable sources’ indicating that no one in Hollywood is interested in hosting, after the, ‘Hart debacle’

As the controversy rumbled on, he tweeted shortly after: ‘I have made the choice to step down from hosting this year’s Oscar’s….

‘This is because I do not want to be a distraction on a night that should be celebrated by so many amazing talented artists… I sincerely apologize to the LGBTQ community for my insensitive words from my past.’

Since then, there hasn’t been any word from the Academy, with Deadline reporting that their, ‘highly reliable sources’ indicating that no one in Hollywood is interested in hosting, after the, ‘Hart debacle’.

With less than two months until the telecast on February 24, and no host named for yet, the Academy of Motion Picture Arts and Sciences are considering drastic alternatives.

There had previously been rumors that the Academy was considering using multiple hosts, with Deadline reporting that this is an option once again, as is using no host at all.

Neither the Academy nor producers Donna Gigliotti and Glenn Weiss have commented on the hosting vacancy, and haven’t even officially confirmed that previous host Kevin has bowed out.

Indiana foster parents arrested after forcing children to do squats with dirty diapers
Bill and Hillary cash in AGAIN with nationwide tour and demand as much as $750 a seat
Pro-transgender banner is dropped at Dodger Stadium during World Series
Winter Storm Harper whips up tornadoes that FLATTENED buildings throughout Alabama cities
Freshman Rep. Ilhan Omar issues apology for using 'anti-Semitic tropes'
Apple CEO Tim Cook will 'take a look' at Saudi woman-tracking app
A Young Living essential oil guide suggests using it for abuse and suicidal thoughts
'It was not me': Congressman Eric Swalwell DENIES loudly passing gas during live MSNBC interview