Luther fans are complaining that the latest series is ‘too gruesome’ with just three hours of footage containing a whopping 37 violent incidents.

Add to that 16 stabbings, 20 punches and five electrocutions and the show has left some unable to continue watching – and others cowering behind their pillows. 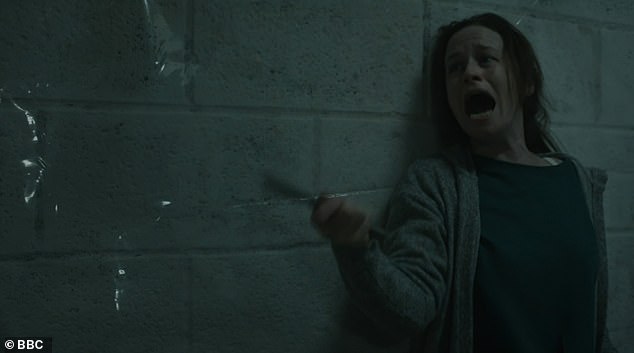 The latest series of Luther has already seen 16 stabbings – with one more episode to go this evening. Even before the new series aired on New Year’s Day Idris Elba revealed it would contain some ‘horrible’ scenes 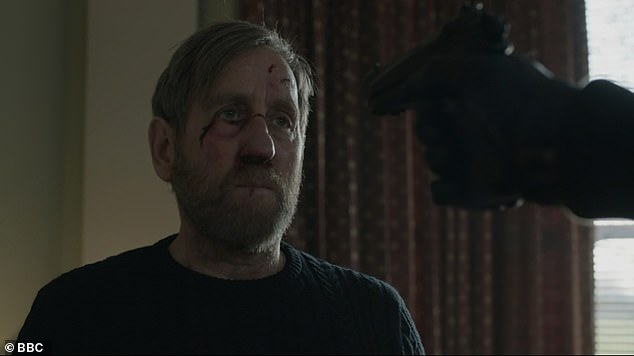 Fan favourite, Benny, was murdered in a shocking twist last night – having given himself up to save a friend. He is one of a number of victims to meet a gruesome end in the latest series 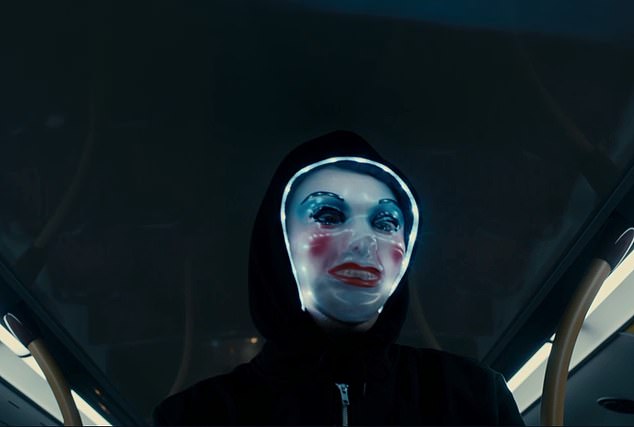 Scary scenes including a terrifying killer with a clown mask murdering Londoners by slashing throats and even cutting people’s eyes out.

While another saw a serial killer picking up a victim by replying to an online ad where a woman was trying to sell her fridge.

Dozens have been taking to social media to complain about the violent scenes, with one commenting: ‘Luther I’d like to love it but it’s gruesome! Watched half from behind a cushion then gave up. #nightmares.’

While a different account added: ‘B****y hell, #Luther is gruesome. And terrifying!’

One viewer even suggested: ‘The BBC need to set up a helpline for those who are traumatised by Luther.’ 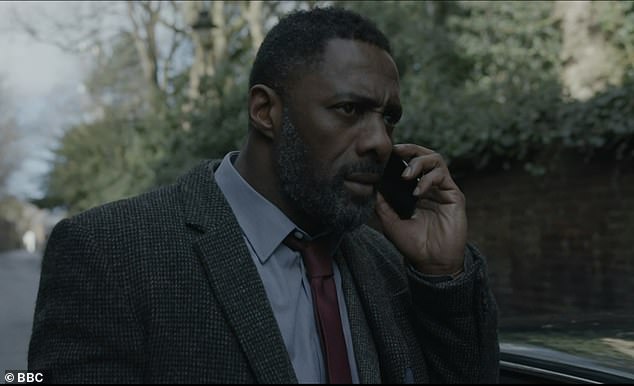 Luther fans have complained that series five is ‘too gruesome’ with some viewers having to watch the show behind their pillows. The latest episode – the penultimate of the series – saw Luther (Idris Elba is pictured) continue his pursuit of killer and surgeon Jeremy 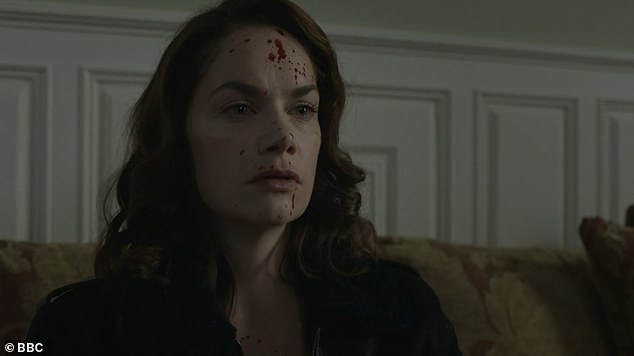 Blood splattered on to  Alice Morgan (played by Ruth Wilson) as fan favourite Benny was brutally shot in the head. She stayed quiet as the bloody scene unfolded 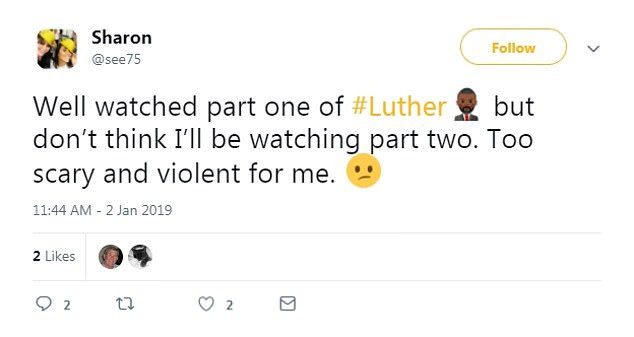 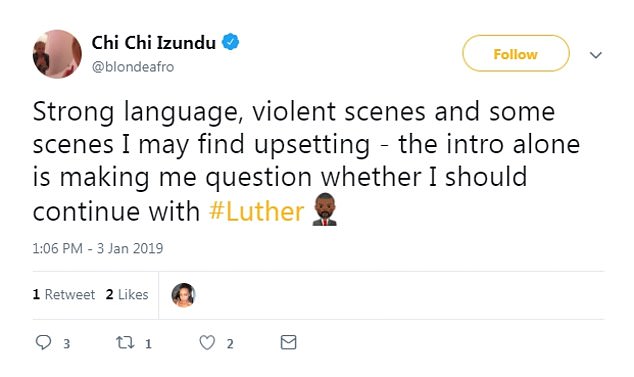 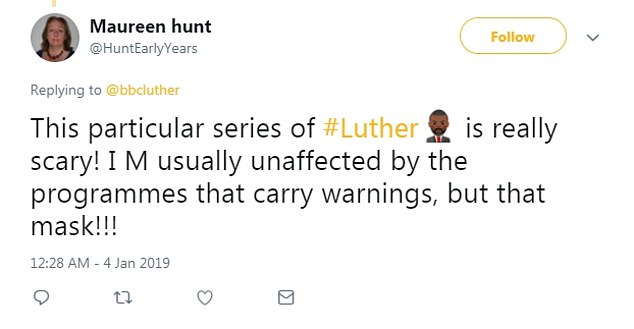 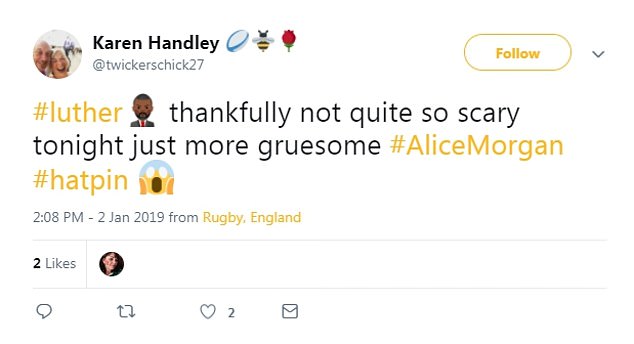 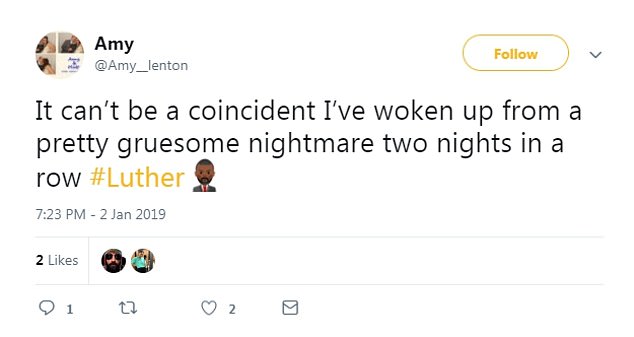 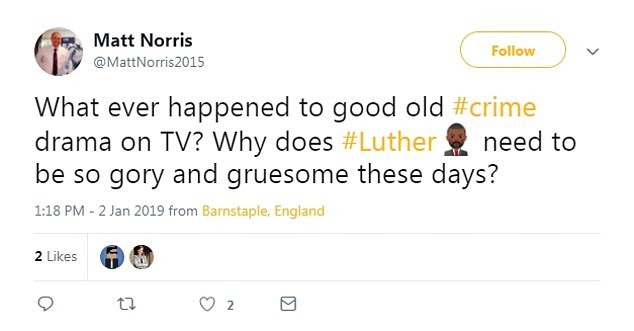 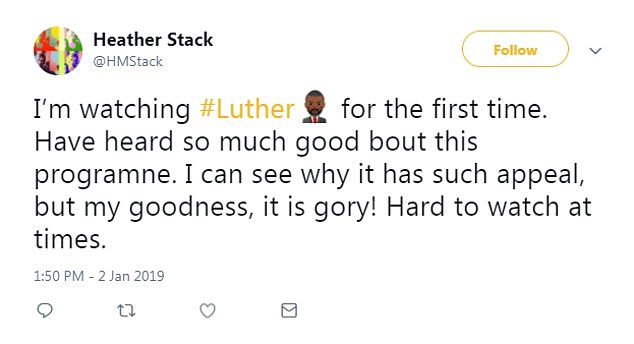 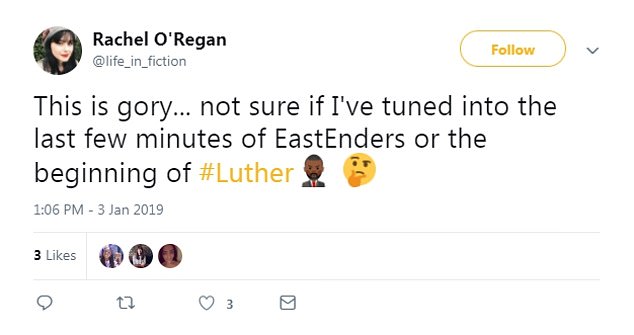 While another, called Chi Chi Izundu, said they may even stop watching the show, saying: ‘Strong language, violent scenes and some I find upsetting – the intro alone is making me question whether I should continue with Luther.’

Others also suggested they may give up, with Sharon writing on Twitter: ‘Well watched part one of Luther but don’t think I’ll be watching part two. Too scary and violent for me.’

While another said: ‘This is the most gruesome Luther EVER. I can’t deal.’

MailOnline has contacted BBC One and Ofcom for comment.

Despite the gruesome scenes, it was still the most watched programme on New Year’s Day with a reported 5.6million average viewers, with a peak at 5.9million. 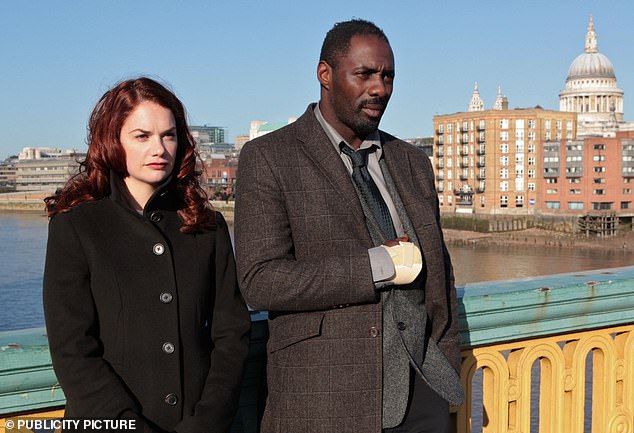 During Luther series five, Alice Morgan, played by Ruth Wilson, made a dramatic return after five years (pictured together in character in 2010)

And not all have been deterred by the violent scenes, with Anne-Marie Rutherford writing on Twitter: ‘Great series of Luther so far. Thou it has put me off going on a double-decker bus and advertising something to sell on eBay.’

While another user said: ‘What a series this has been loved it from the very start series one! One of the best dramas on the BBC ever for sure! Great viewing!’

During Luther series five, Alice Morgan, played by Ruth Wilson, made a dramatic return after five years, with viewers previously believing the character supposedly ‘died’ off-screen when she was drowned by Megan.

After turning up on her love interest DCI John Luther’s, played by Idris Elba, doorstep at the end of episode one, she said: ‘Wotcher.’

Luther continues at 9pm on BBC One.

RBS boss: Bank´s tarnished reputation could take...
India inaugurates world's biggest statue amid tight...
People's Procession sees 10,000 march through London in a 'nation's thank you'
Tory whips threaten to cancel CHRISTMAS for MPs if they vote down Brexit
Major supermarkets including Asda, Sainsburys and Lidl warn against no deal Brexit
Doctor Who's iconic robotic companion K9 is set for a comeback on a new spin-off series for children
Faces of synagogue shooter's victims are revealed in Germany
UK police probing Harry Dunn's death will travel to USA to interview diplomat's wife Anne Sacoolas