It was a historic and emotional day for the 116th Congress as they were sworn into their new posts on Thursday and became one of the most diverse classes the nation has ever seen.

It was an especially triumphant milestone for Demorats Rep. Deb Haaland, 58, of New and Rep. Sharice Davids, 38, of Kansas who are the first two Native American women to be elected to Congress.

Haaland and David shared an emotional hug and wiped away tears on the House floor after they were sworn in. 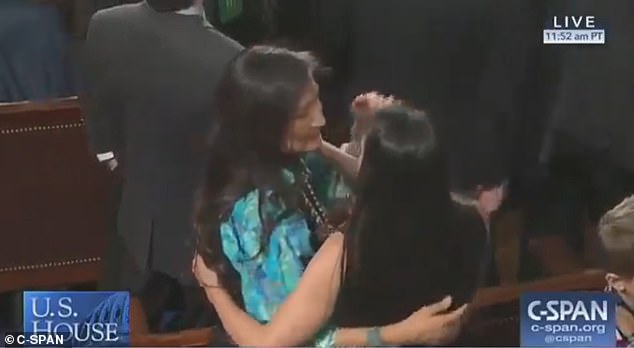 Demorats Rep. Deb Haaland, 58, of New Mexico and Rep. Sharice Davids, 38, of Kansas shared a powerful and tearful embrace on the House floor on Thursday 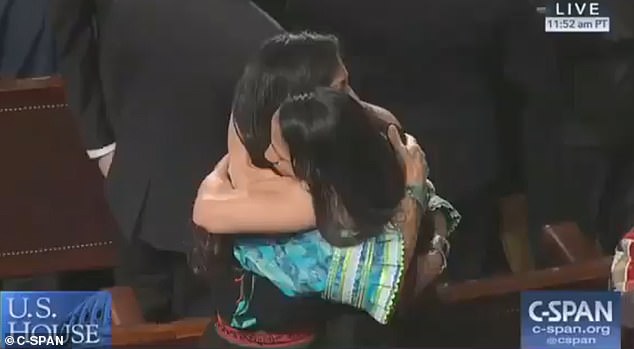 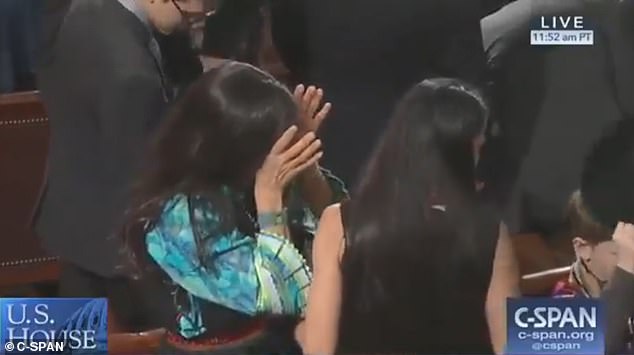 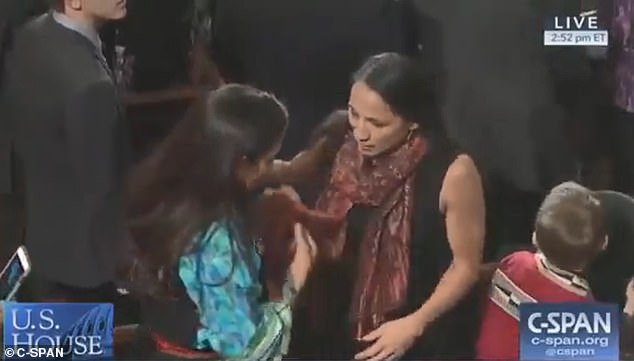 After sharing the warm embrace for several seconds, Haaland reached for Davids’ scarf to wipe her tears.

Haaland and her guests proudly represented their tribe, the Pueblo of Laguna, at the swearing-in ceremony by wearing traditional dresses and outfits.

She shared pictures of the special outfits with her family tweeting: ‘New Mexicans are in the house, the US House that is. #116thCongress.’

Davids is a member of the Ho-Chunk Nation of Wisconsin and is also the first openly  LGBTQ Congressperson to represent Kansas.

She tweeted the powerful video of their hug writing: ‘Today’s history is our history. So grateful to be a part of this moment – this movement – with you Deb Haaland.’

‘I’m proud to have encouraged and contributed to several Native women this past cycle who won their state House seats. I believe that Native women are seeing positive role models in the wins that happened this year. I will keep supporting them,’ Haaland said to 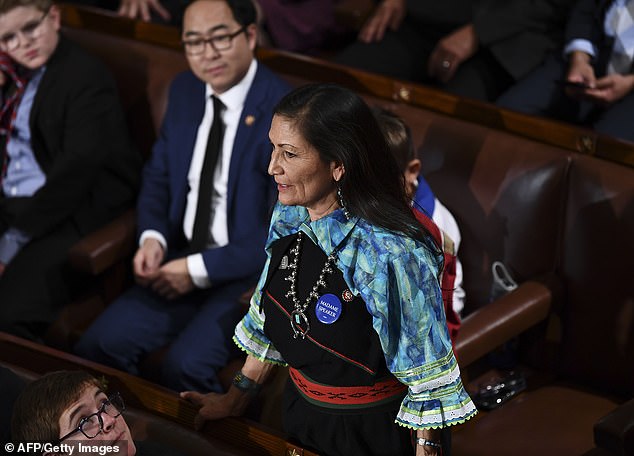 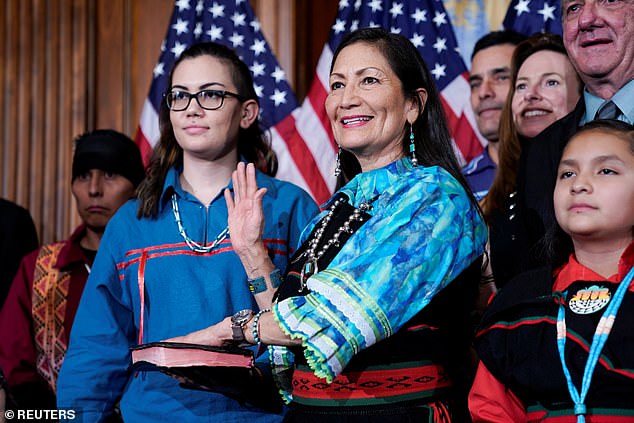 ‘New Mexicans are in the house, the US House that is,’ she said before she was sworn in surrounded by family and friends 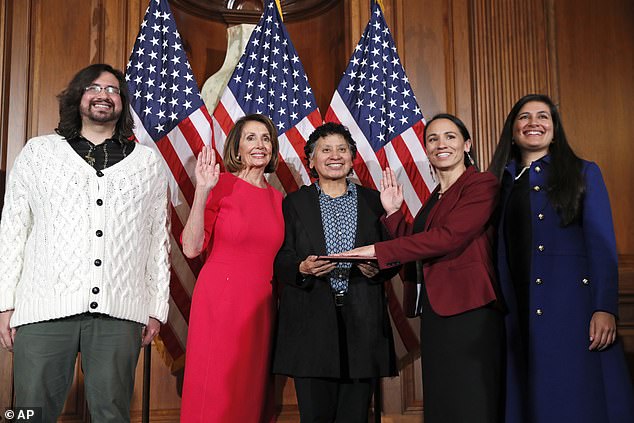 Davids, pictured second from right, as she was sworn into the House next to House Speaker Nancy Pelosi. She is also the first openly LGBTQ member of Congress to represent Kansas

David shared the video footage of her tearful embrace with Haaland on Twitter writing: ‘My scarf is your scarf. Today’s history is our history. So grateful to be a part of this moment – this movement – with you.’

During a speech on election night in November, Haaland said ’70 years ago, Native Americans right here in New Mexico couldn’t vote’, according to

‘Growing up in my mother’s pueblo household and as a 35th generation New Mexican, I never imagined a world where I would be represented by someone who looks like me. Tonight, New Mexico, you are sending one of the very first Native American women to Congress,’ she added.

Democrat Rep. Ilhan Omar of Minnesota became the first Somali-American member of Congress and the first to wear a hijab or headscarf there. 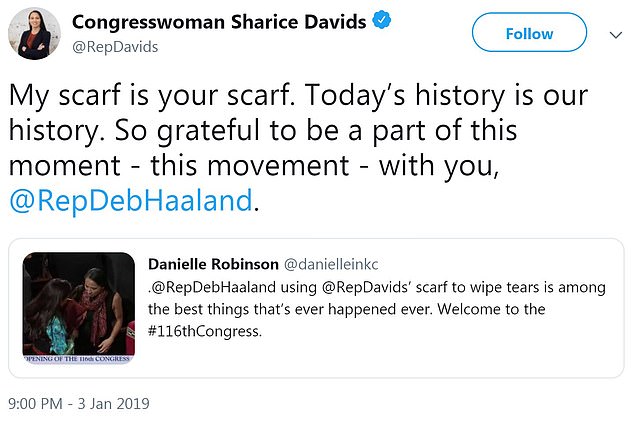 Davids tweeted the powerful video of their hug writing: ‘Today’s history is our history. So grateful to be a part of this moment – this movement – with you Deb Haaland’

It’s official! The two of them proudly tweeted of their history-making success 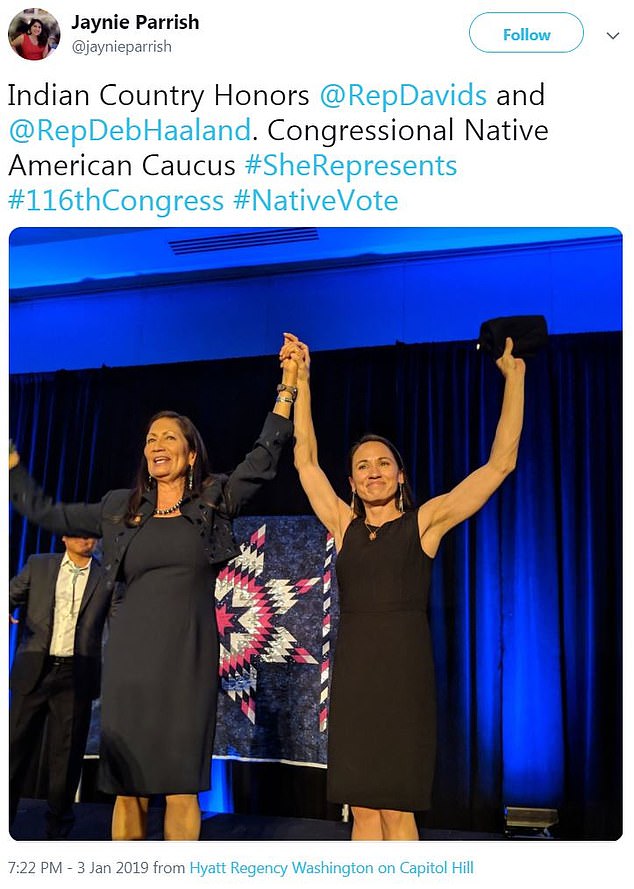 She gained religious exemption from a 181-year-old rule that banned hats from being worn in the Chamber. She was also sworn in with her hand placed on the Koran instead of the Bible.

Also proudly representing their heritage was Democrat Rep. Rashida Tlaib of Michigan, who donned a traditional Palestinian gown on Thursday.

Rep. Omar and Rep. Tlaib are the first Muslim women to ever be elected to Congress.

The 116th class marks the first time Texas sent two Latina members to Congress. It was also the first time two black women from New England made it to D.C.

Rep. Alexandria Ocasio Cortez of New York is the first member to be younger than 30.

The new Congress also boasts the largest number of women ever with 102 voted into the House and 23 into the Senate.

Additionally the Congressional Black Caucus and the Hispanic caucus have welcomed more members than ever before.

The healthiest McDonalds meals are revealed
Biden breaks his silence on Creepy Joe scandal to admit he HAS made women 'uncomfortable'
Police launch investigation into 'sick explosion' in packed parking lot after video of it goes viral
13-platform Japanese home showing off EVERYTHING in the house at once sits in unassuming steel box
A blood test could predict heart disease and death 40 years in advance, study suggests
Mother slammed for wanting to call her baby almost the exact name as her best friend's little girl
WeChat is BANNING and censoring Chinese-American users who talk about Hong Kong in private messages
Mark Ruffalo reveals he gained 30 pounds to play one of the twins in I Know This Much Is True