Newly-elected Rashida Tlaib told supporters she is going to impeach just hours after being sworn in.

Tlaib, who was elected to Michigan’s 13th district as the first Palestinian-American woman in Congress, made the remarks at a swearing-in party on Thursday.

Speaking in a dimly-lit room, Tlaib told a cheering crowd: ‘We’re going to impeach the motherf***er.’ 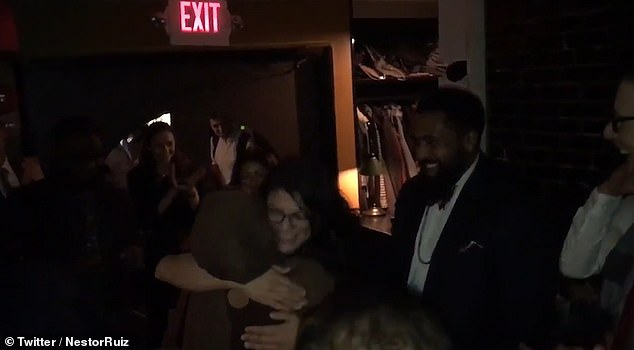 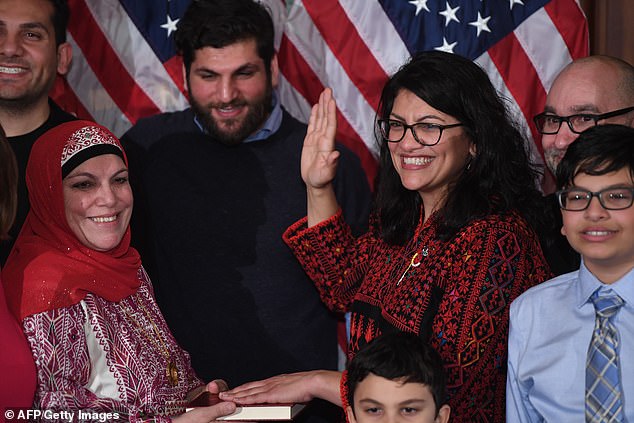 Tlaib, who represents Michigan’s 13th district, had already published an op-ed in the Detroit Free Press calling on Democrats to start impeachment proceedings against Trump on day one

She made the foul-mouthed remark while recalling a conversation she had with her son after getting elected.

‘People love you, and you win,’ she told the crowds.

‘And when your son looks at you and says: “Mumma look, you won, bullies don’t win.”

‘And I said: “Baby they don’t, because we’re going to go in there and impeach the motherf***er.”‘

Tlaib had earlier penned an op-ed for the  alongside John Bonifaz, a constitutional lawyer and founder of the ‘Impeach Donald Trump Now’ campaign in which the pair issued the same demand.

‘President Donald Trump is a direct and serious threat to our country.

‘On an almost daily basis, he attacks our Constitution, our democracy, the rule of law and the people who are in this country.

‘His conduct has created a constitutional crisis that we must confront now,’ they wrote. 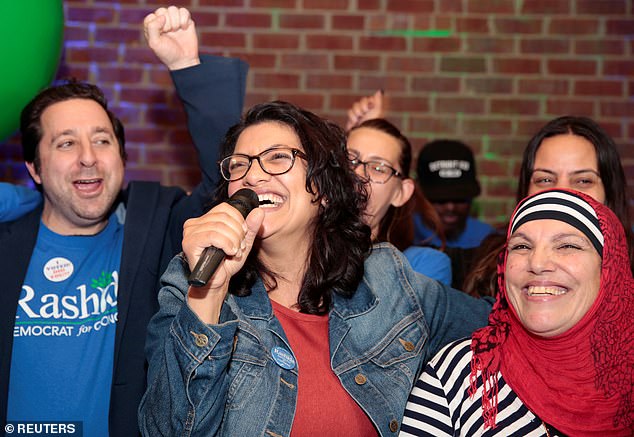 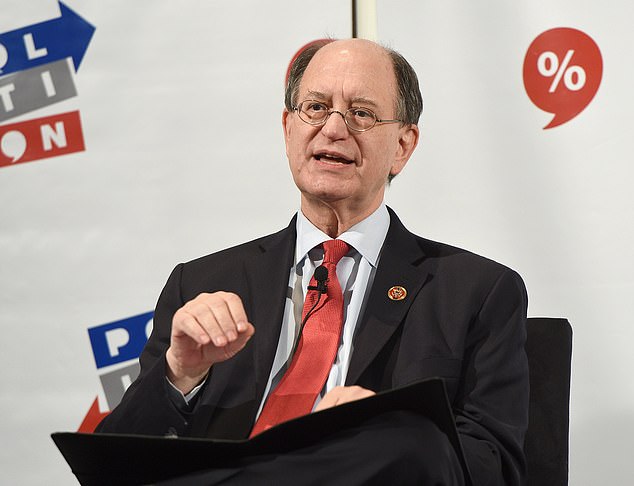 Democrat Brad Sherman, of California, has already introduced articles of impeachment against Trump, the same stunt he performed in 2017

The pair also dismiss the idea of waiting for Robert Mueller to finish his investigation before beginning impeachment proceedings, and say it would be a betrayal of the American people to wait until the 2020 election to unseat him.

‘In the face of this constitutional crisis, we must rise. We must rise to defend our Constitution, to defend our democracy, and to defend that bedrock principle that no one is above the law, not even the President of the United States.

‘Each passing day brings more pain for the people most directly hurt by this president, and these are days we simply cannot get back.

‘The time for impeachment proceedings is now.’

Her fiery remarks came as fellow Democrat Brad Sherman, of California, used his first day in office to file an impeachment resolution against Trump.

Sherman introduced an identical bill in 2017, charging that Trump obstructed justice when he fired FBI Director James Comey just months after moving into the White House.

The resolution accuses Trump of ‘threatening, and then terminating’ Comey because he knew the FBI was investigating then-National Security Advisor Michael Flynn and ‘conducting one or more investigations into Russian state interference in the 2016 campaign.’ 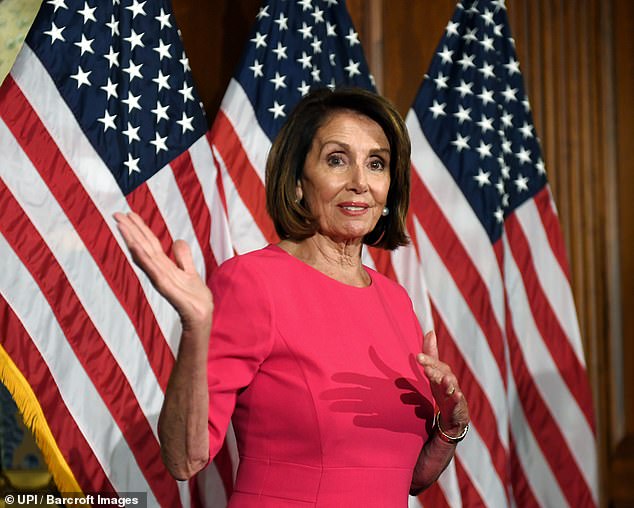 Meanwhile Nancy Pelosi stepped up pressure on Trump as the House passing a spending bill which would reopen the government, but without $5.6billion in funding for his wall

Sherman told the Los Angeles Times that ‘there is no reason’ Congress shouldn’t consider impeachment: ‘Every day, Donald Trump shows that leaving the White House would be good for our country.’

Ohio Republican Rep. Jim Jordan confirmed that Sherman had filed his bill, tweeting: ‘We knew they couldn’t help themselves. Rep. Sherman files articles of impeachment on the President. Dems are more focused on stopping Trump than building the Wall and helping the country.’

Newly installed House Speaker Nancy Pelosi told the ‘TODAY’ show this week that she doesn’t want to see an impeachment ‘for political reasons,’ but cautioned that politics also won’t prevent her from calling a vote if it’s justified.

A Politico/Morning Consult poll in November found that just 33 per cent of voters want Trump impeached. But 61 per cent of Democrats are eager to see it in 2019.

A December Harvard CAPS/Harris poll found 39 per cent of voters want to see the president fired.

Pelosi also stepped up pressure on Trump after passing a spending bill that would end the government shutdown but without including $5.6billion for his border wall.

She said Trump and Senate Republicans should ‘take yes for an answer’ and approve the border bill, which was virtually identical to a plan the Senate adopted on a voice vote last month. 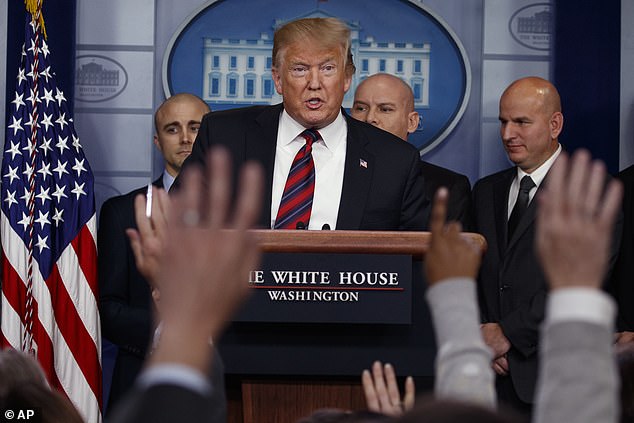 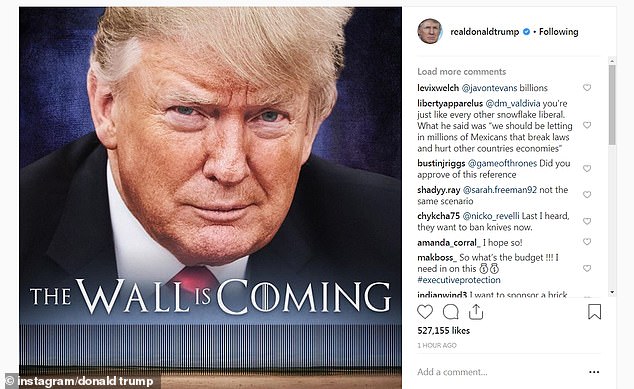 Pelosi, who was elected speaker earlier Thursday, also took a shot a Trump, calling his proposal ‘a wall between reality and his constituents.’

The Democratic package to end the shutdown includes a bill to temporarily fund the Department of Homeland Security at current levels – with $1.3 billion for border security, – through February 8 as bipartisan talks would continue.

The largely party-line votes came after Trump made a surprise appearance at the White House briefing room pledging to keep up the fight for the wall.

It was his first appearance behind the podium, that other presidents have used for press conferences, in the nearly two years since he took office.

Surrounded by border agents, including prolific Fox News guest Brandon Judd, he insisted his wall was necessary for national security.

He left after roughly ten minutes without taking questions from reporters, despite the fact that the gathering had been billed as a ‘briefing’ with White House spokeswoman Sarah Sanders.

Trump then posted a meme showing his face and the words ‘The Wall is Coming’.

Homosexual UPenn scholar Blaze Bernstein's homicide was a hate crime, prosecutors say
McCain to lie in state at Arizona Capitol on his birthday
Doctors have developed a way of building nut tolerance
Rams' male cheerleaders make Super Bowl history as first ever to perform during championship game
Puppy is found 'burnt to a crisp' in a garbage bag outside a McDonalds
Climate change has caused hundreds of walruses to plunge to their deaths offs high cliffs
Lions thrive at Kenyan conservation park where Born Free was filmed - later targeted by poachers
Trump denies having 'Parkinson's' as he faces questions over his health after THAT walk down a ramp