The periodic table stares down from the walls of just about every chemistry lab.

The credit for its creation generally goes to Dimitri Mendeleev, a Russian chemist who in 1869 wrote out the known elements (of which there were 63 at the time) on cards and then arranged them in columns and rows according to their chemical and physical properties.

To celebrate the 150th anniversary of this pivotal moment in science, the UN has proclaimed 2019 to be the International year of the Periodic Table. 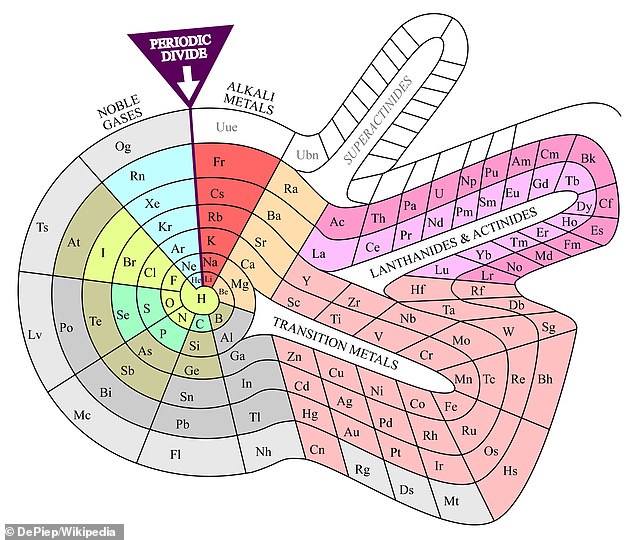 Theodor Benfey’s spira table, created in 1964. It shows the names of the groups in which the elements are.  Each color represents a group of the elements: Alkali Metals, Metalloids, etc

But the periodic table didn’t actually start with Mendeleev. Many had tinkered with arranging the elements.

Decades before, chemist John Dalton tried to create a table as well as some rather interesting symbols for the elements (they didn’t catch on).

And just a few years before Mendeleev sat down with his deck of homemade cards, John Newlands also created a table sorting the elements by their properties.

Mendeleev’s genius was in what he left out of his table.

He recognised that certain elements were missing, yet to be discovered.

So where Dalton, Newlands and others had laid out what was known, Mendeleev left space for the unknown. 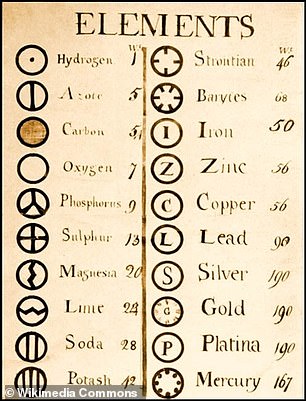 Even more amazingly, he accurately predicted the properties of the missing elements.

Notice the question marks in his table above? For example, next to Al (aluminium) there’s space for an unknown metal.

Mendeleev foretold it would have an atomic mass of 68, a density of six grams per cubic centimetre and a very low melting point.

Six years later Paul Émile Lecoq de Boisbaudran, isolated gallium and sure enough it slotted right into the gap with an atomic mass of 69.7, a density of 5.9g/cm³ and a melting point so low that it becomes liquid in your hand.

Mendeleev did the same for scandium, germanium and technetium (which wasn’t discovered until 1937, 30 years after his death).

At first glance Mendeleev’s table doesn’t look much like the one we are familiar with.

For one thing, the modern table has a bunch of elements that Mendeleev overlooked (and failed to leave room for), most notably the noble gases (such as helium, neon, argon).

And the table is oriented differently to our modern version, with elements we now place together in columns arranged in rows. 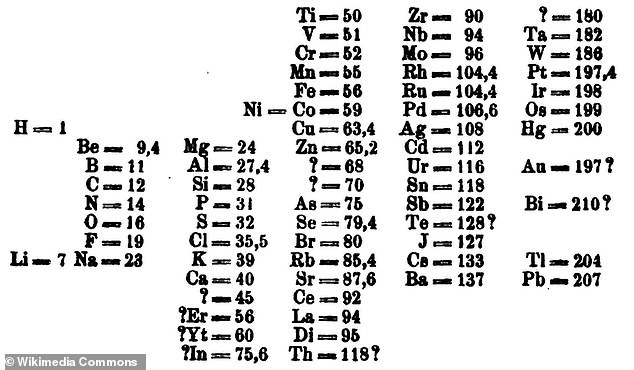 Dimitry Mendeleev’s table complete with missing elements. The credit for the modern periodic table creation generally goes to Mendeleev, a Russian chemist who in 1869 wrote out the known elements (of which there were 63 at the time) on cards and then arranged them in columns and rows according to their chemical and physical properties.

But once you give Mendeleev’s table a 90-degree turn, the similarity to the modern version becomes apparent.

For example, the halogens – fluorine (F), chlorine (Cl), bromine (Br), and Iodine (I) (the J symbol in Mendeleev’s table) – all appear next to one another.

Today they are arranged in the table’s 17th column (or group 17 as chemists prefer to call it).

It may seem a small leap from this to the familiar diagram but, years after Mendeleev’s publications, there was plenty of experimentation with alternative layouts for the elements.

Even before the table got its permanent right-angle flip, folks suggested some weird and wonderful twists. 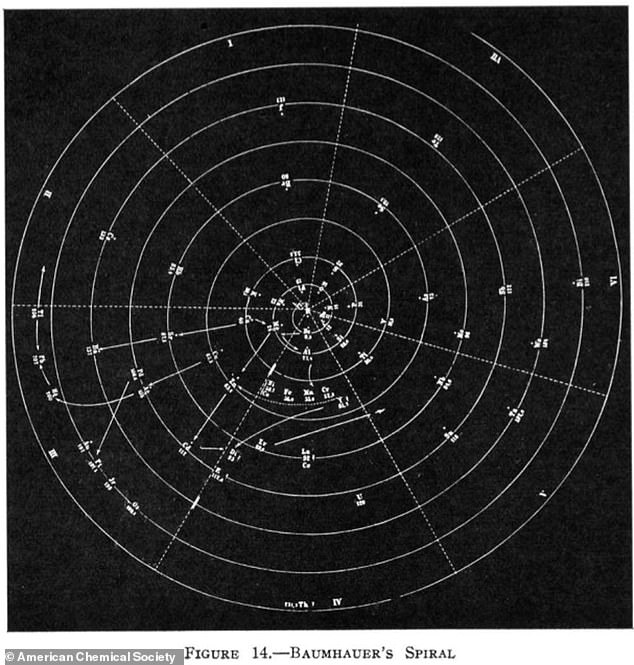 One particularly striking example is Heinrich Baumhauer’s spiral, published in 1870, with hydrogen at its centre and elements with increasing atomic mass spiralling outwards.

The elements that fall on each of the wheel’s spokes share common properties just as those in a column (group) do so in today’s table.

There was also Henry Basset’s rather odd ‘dumb-bell’formulation of 1892.

Nevertheless, by the beginning of the 20th century, the table had settled down into a familiar horizontal format with the strikingly modern looking version from Heinrich Werner in 1905.

For the first time, the noble gases appeared in their now familiar position on the far right of the table. 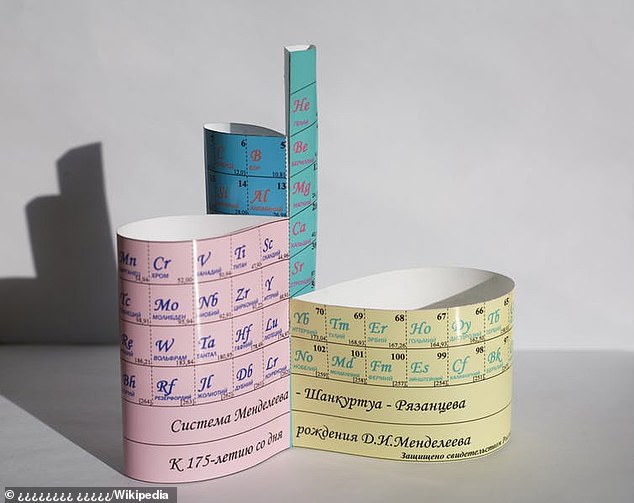 A 3D ‘Mendeleev flower’ version of the table.

Werner also tried to take a leaf out of Mendeleev’s book by leaving gaps, although he rather overdid the guess work with suggestions for elements lighter than hydrogen and another sitting between hydrogen and helium (none of which exist).

Despite this rather modern looking table, there was still a bit of rearranging to be done.

Charles Janet’s left-step table. He took a physicist’s approach to the table and used a newly discovered quantum theory to create a layout based on electron configurations.

He took a physicist’s approach to the table and used a newly discovered quantum theory to create a layout based on electron configurations.

The resulting ‘left step’ table is still preferred by many physicists.

Interestingly, Janet also provided space for elements right up to number 120 despite only 92 being known at the time (we’re only at 118 now).

The modern table is actually a direct evolution of Janet’s version.

The alkali metals (the group topped by lithium) and the alkaline earth metals (topped by beryllium) got shifted from far right to the far left to create a very wide looking (long form) periodic table.

The problem with this format is that it doesn’t fit nicely on a page or poster, so largely for aesthetic reasons the f-block elements are usually cut out and deposited below the main table.

That’s how we arrived at the table we recognise today. 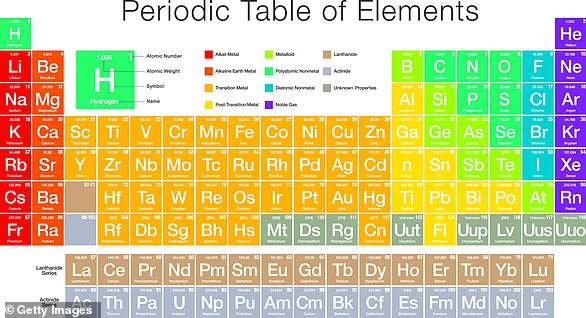 That’s not to say folks haven’t tinkered with layouts, often as an attempt to highlight correlations between elements that aren’t readily apparent in the conventional table.

There are literally hundreds of variations with spirals and 3D versions being particularly popular, not to mention more tongue-in-cheek variants.

How about my own fusion of two iconic graphics, Mendeleev’s table and Henry Beck’s London Underground map below? 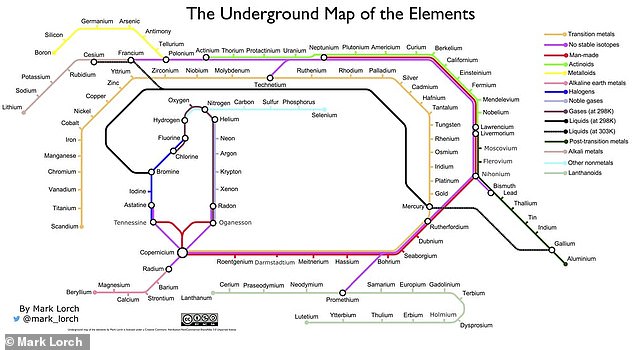 Or the dizzy array of imitations that aim to give a science feel to categorising everything from beer to Disney characters, and my particular favourite ‘irrational nonsense’.

All of which go to show how the periodic table of elements has become the iconic symbol of science.