The weather was flipped Wednesday throughout much of the U.S. West, with snow falling on cactuses in the Arizona desert and Anchorage seeing balmy weather – at least by Alaska standards.

In Phoenix, the overnight low was 30 degrees for the first time in five years and more cold temperatures were expected Thursday. The Tucson area saw as much as 6 inches of snow.

‘It was pretty magical,’ said Jessica Howard, a resident of the Tucson suburb of Vail who took her 8- and 5-year-old children to play in the snow. 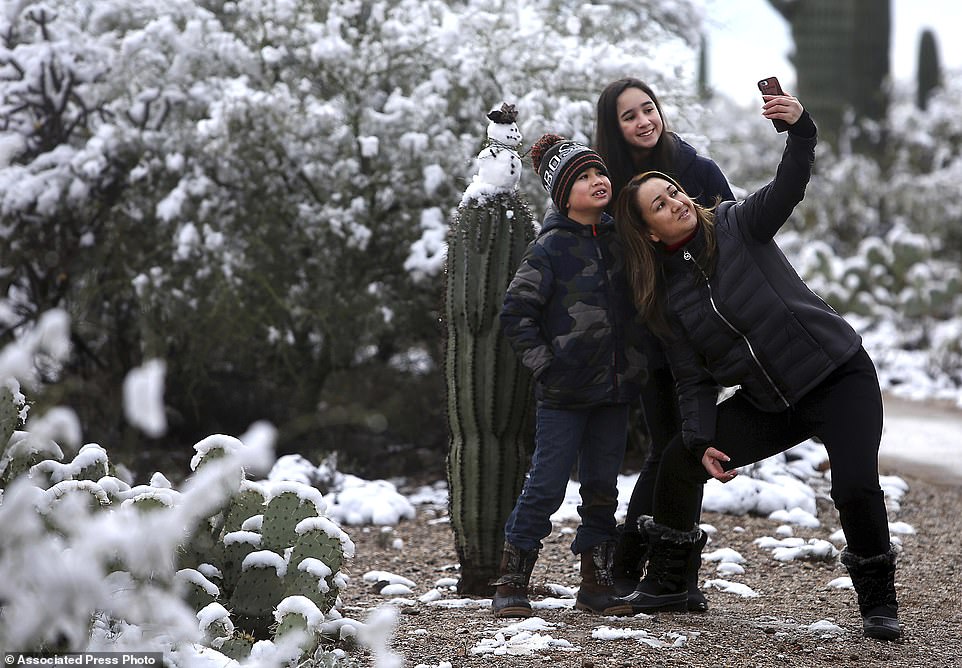 ‘It’s the first time we’ve seen snow the desert,’ says Mayra Vasquez who brought Valeria Luzania, 11, and MarcoDario Luzania, 8, to Saguaro National Park East on January 02, 2019. The kids built a snowman and the trio took a selfie with their creation 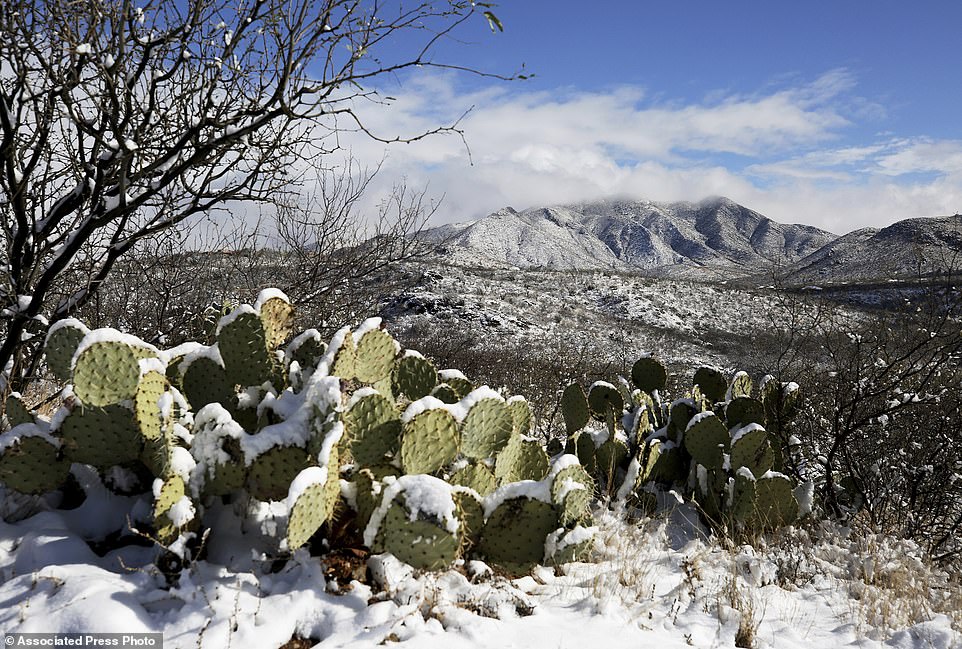 The Empire Mountains emerge from cloud cover after the second round of winter storms brought snowfall to the surrounding metro Tucson area and southeast Arizona, Jan. 2, 2019 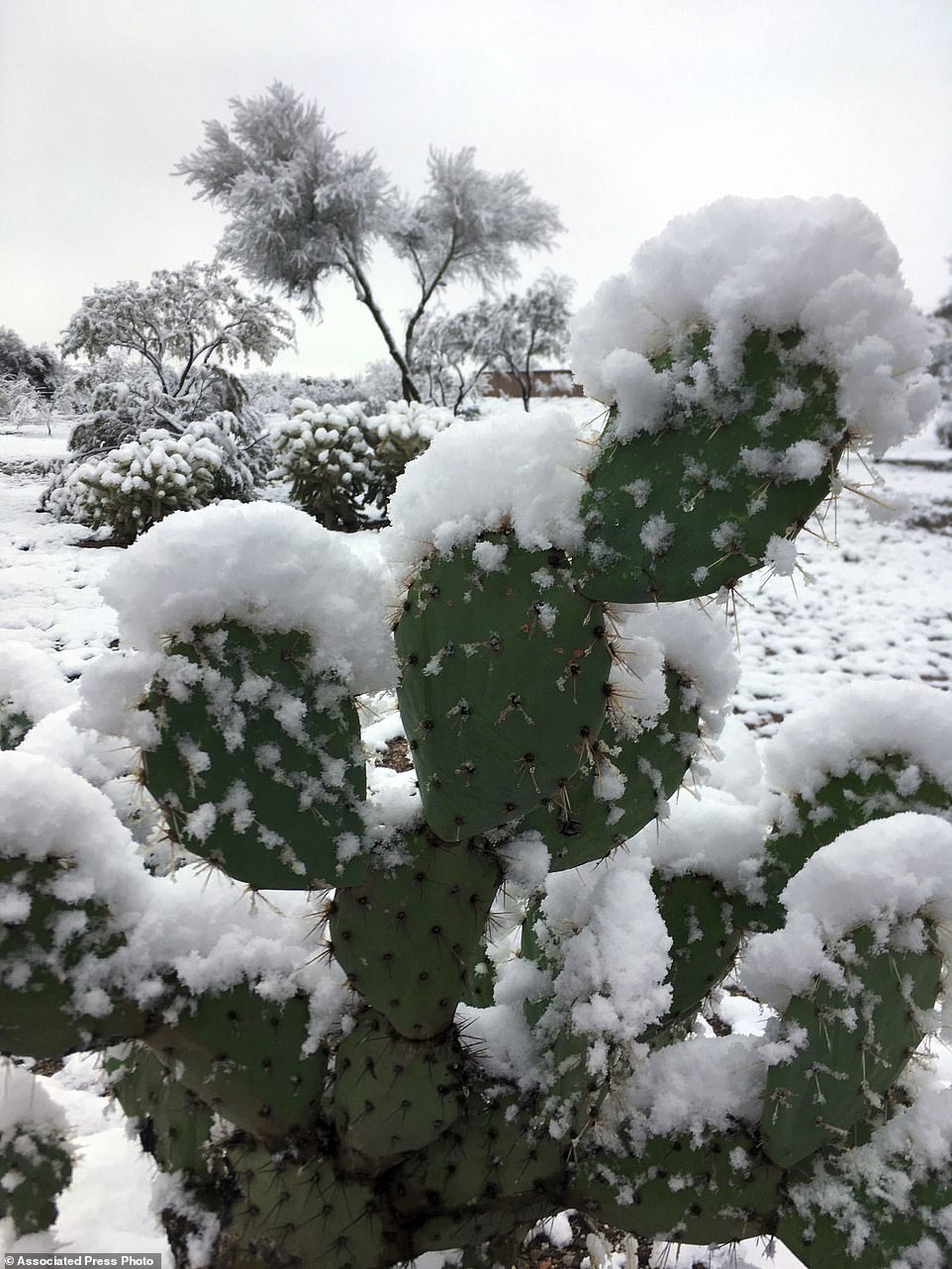 Snow partially covers a cactus outside of Tucson near Vail, Ariz., Wednesday, Jan. 2, 2018. Southern Arizona and other parts of the Southwest are seeing unusually cold temperatures as a winter storm moves through the region

Snow= dusted cactuses and mountains in southern Arizona, and covered the Grand Canyon in the north.

Elsewhere, the National Weather Service issued a freeze warning in the Nevada county where Las Vegas is located.

Snow fell and stuck Tuesday on a desert highway over a mountain just 20 minutes outside Sin City. 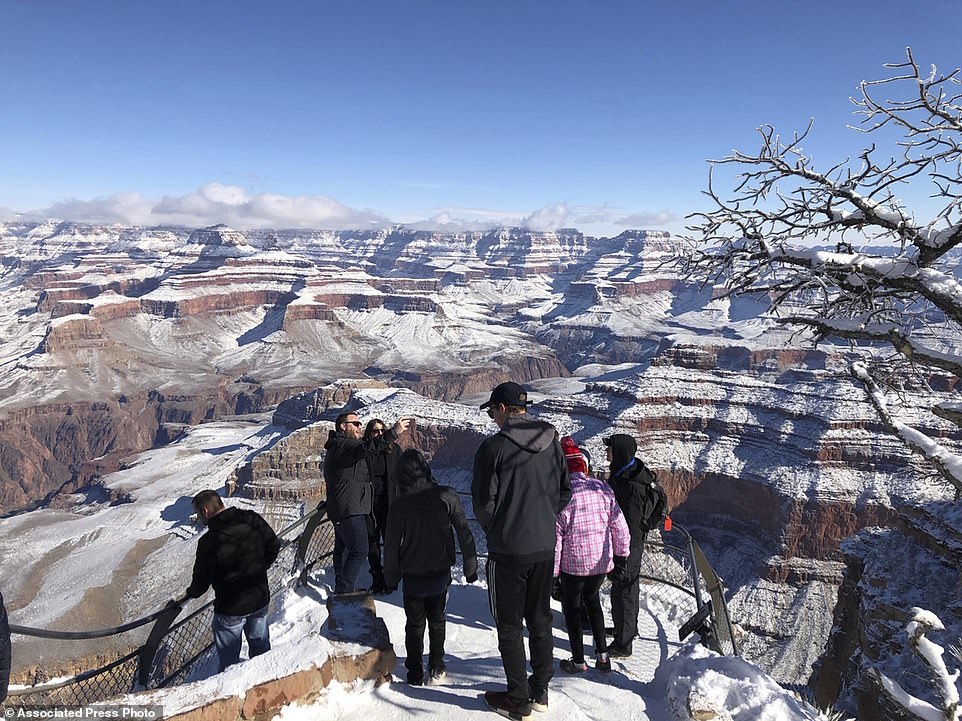 In this Tuesday, Jan. 1, 2019, photo, tourists look at and take photos of a snow-covered Grand Canyon, in Arizona. A winter storm has covered cactus with snow in parts of the American Southwest as temperatures in the desert fall below those of Anchorage, Alaska 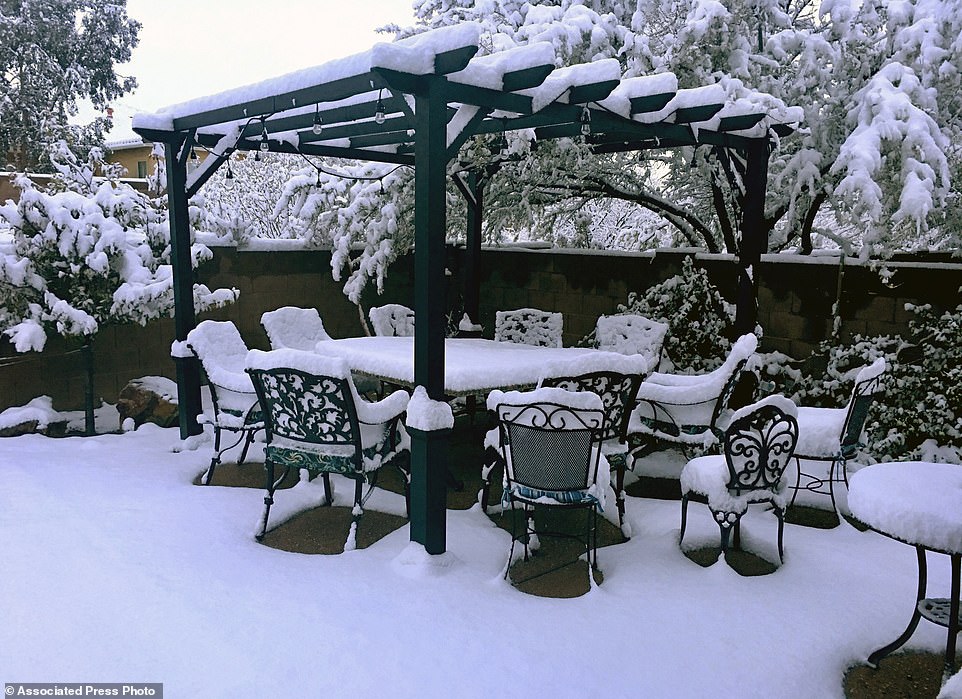 This photo provided by Pete Dugan shows snow covered patio furniture in the back yard of a home in Tucson, Ariz. on January 2, 2019 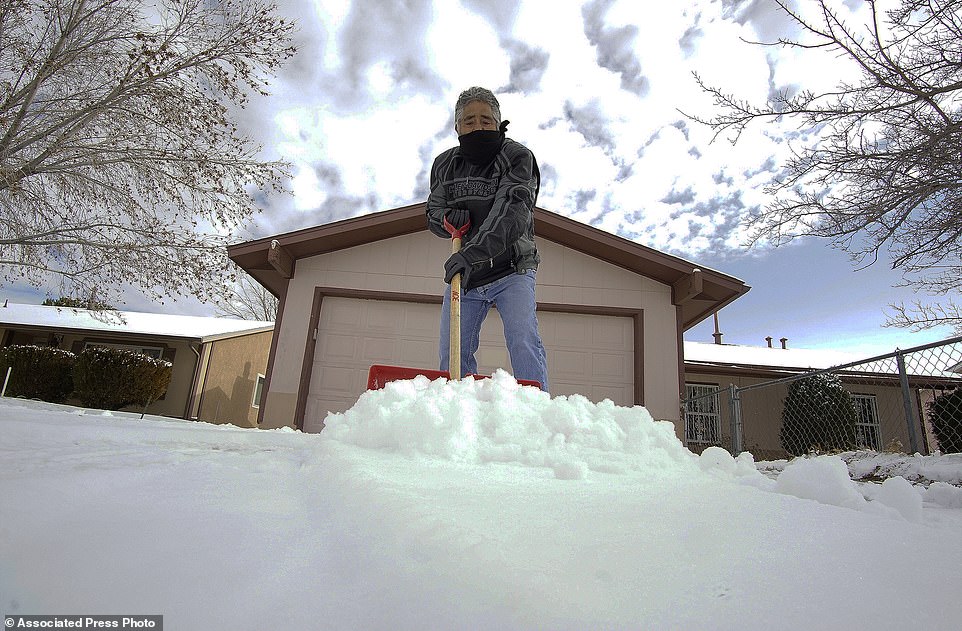 The cold weather and snow is ‘quite uncommon’ for the area, said Glenn Lader, a National Weather Service meteorologist in Tucson.

Nogales, an Arizona city on the Mexico border, had about 6 inches of snow, he said.

Even Southern California got a bit of the action, with rain expected as part of already cold, windy weather. 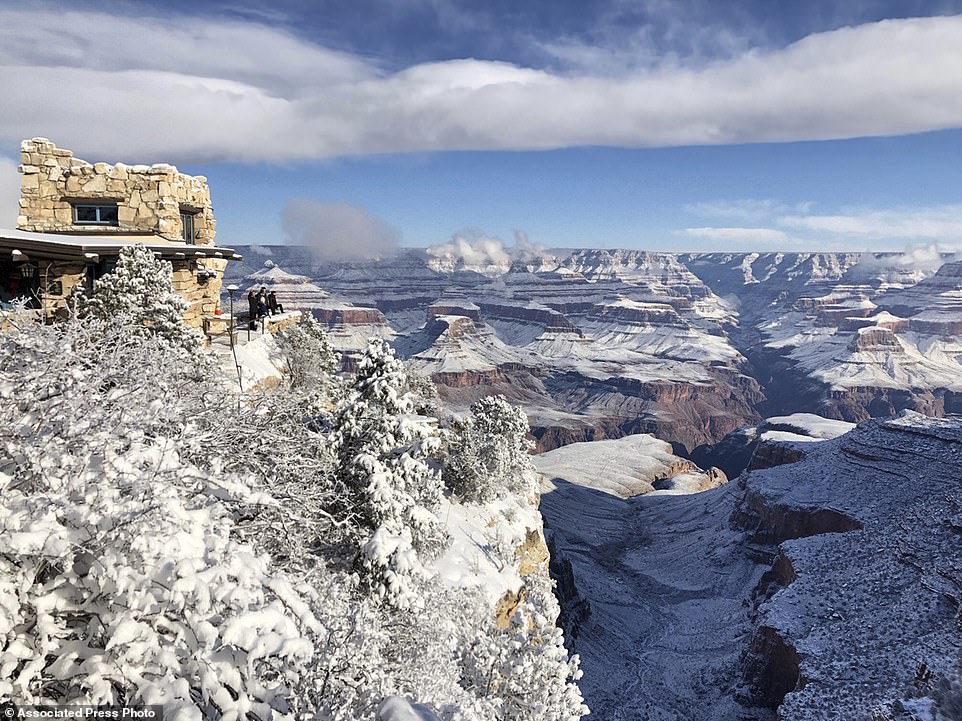 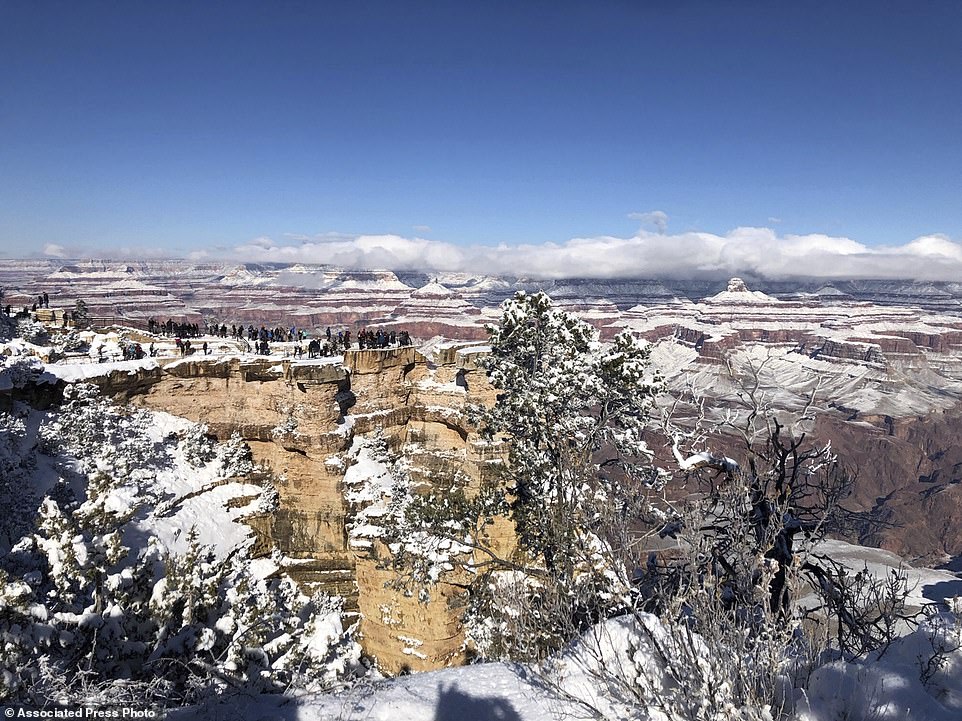 Meanwhile, some parts of Alaska rang in the new year with relatively balmy weather for the region that helped melt snow in Anchorage.

A change in the jet stream brought warmer air from the south, taking the temperature to 44 degrees on New Year’s Day.

It was a nice respite from a winter mix that left 32.6 inches of snow on the ground in Anchorage in December, with most of it falling during the last half of the month.

Colder weather was in the forecast, with high temperatures dropping to the teens or even single digits. 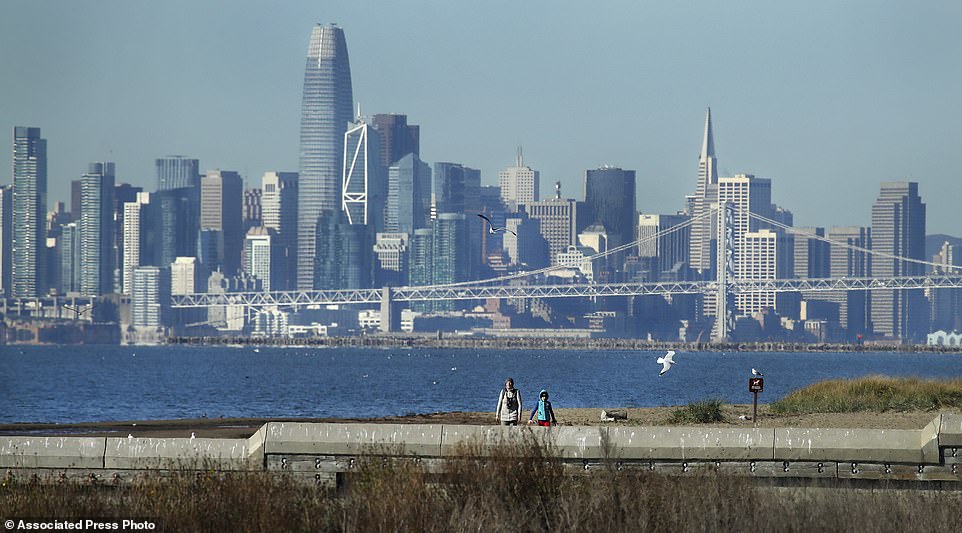 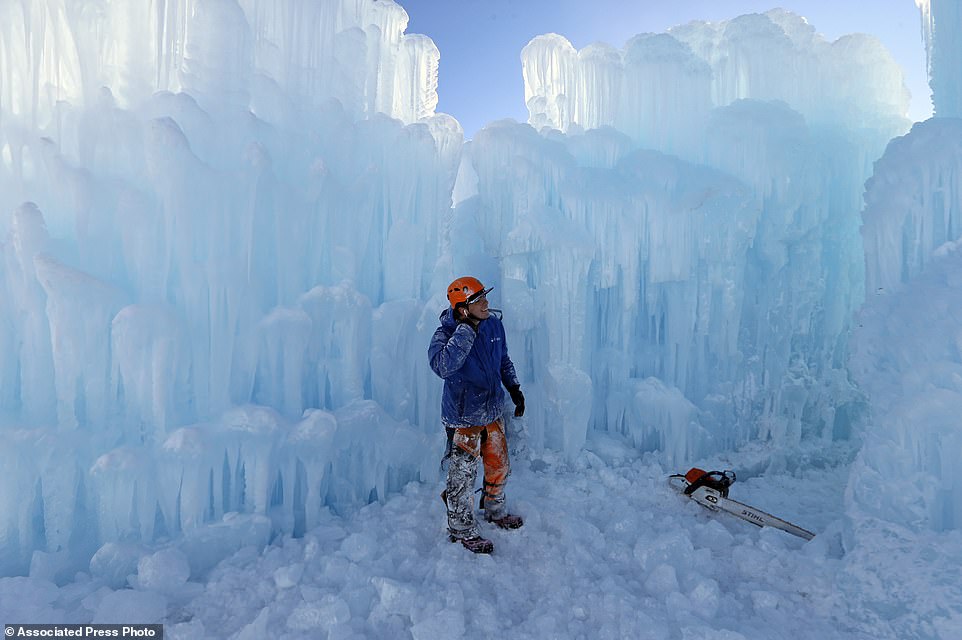 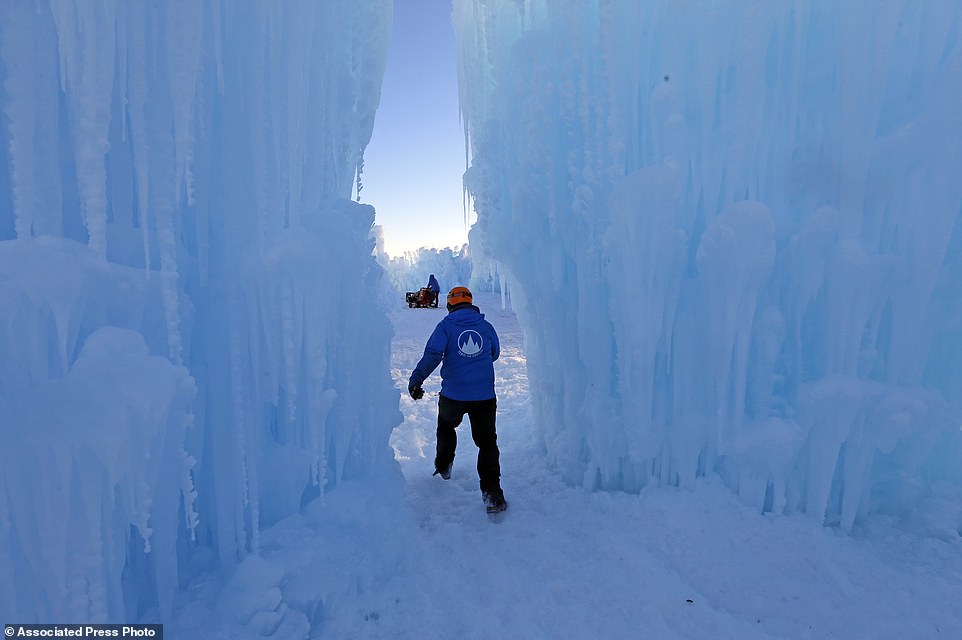